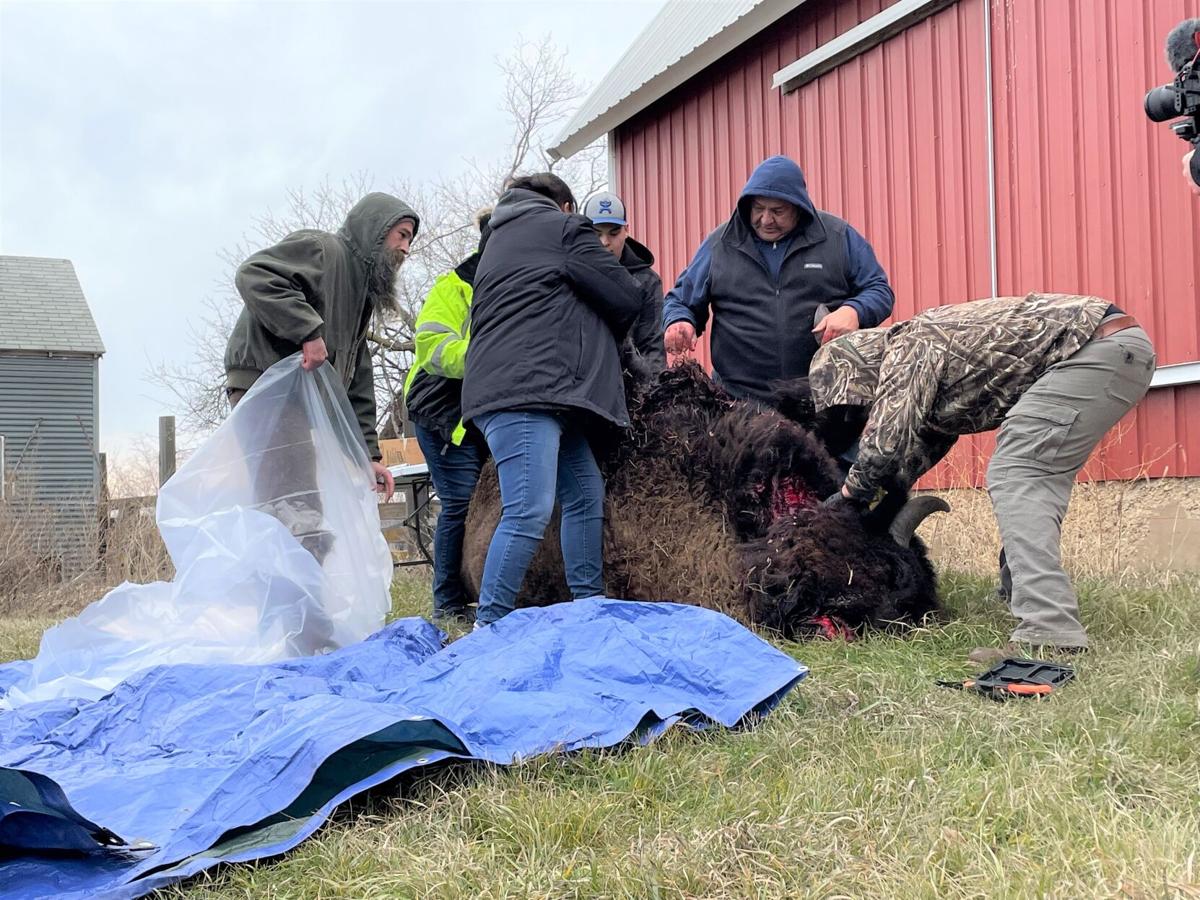 A group of Lakota people traveled from the Rosebud Indian Reservation of South Dakota to harvest a 1,220-pound buffalo. Parts of the process were recorded for later educational use in a youth development program meant to reclaim culture. 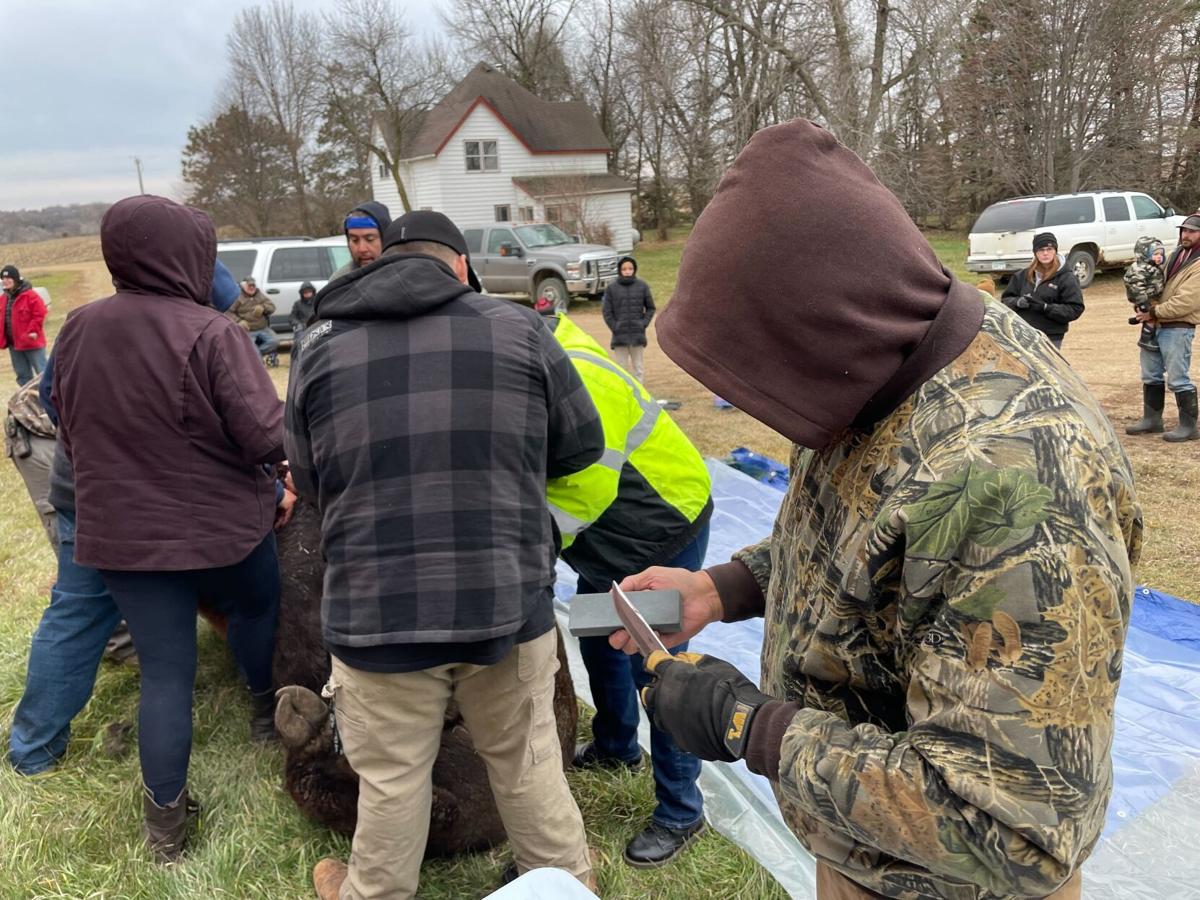 Charles Bull Bear prepares to sharpen knives with which different parts of the bison will be harvested. 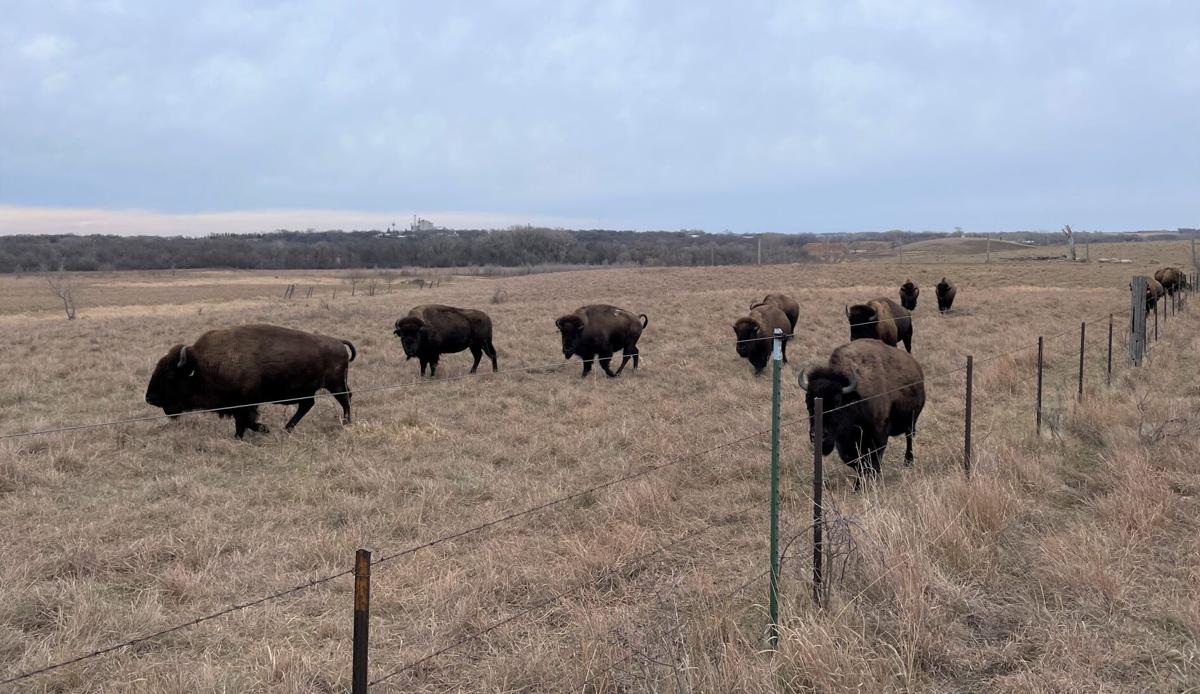 Craig Fischer, owner of Sleepy Bison Ranch, keeps about 80 bison at two farms in southern Minnesota. One is near Sleepy Eye and the other is near Sanborn, which lies about halfway between Mankato and South Dakota. 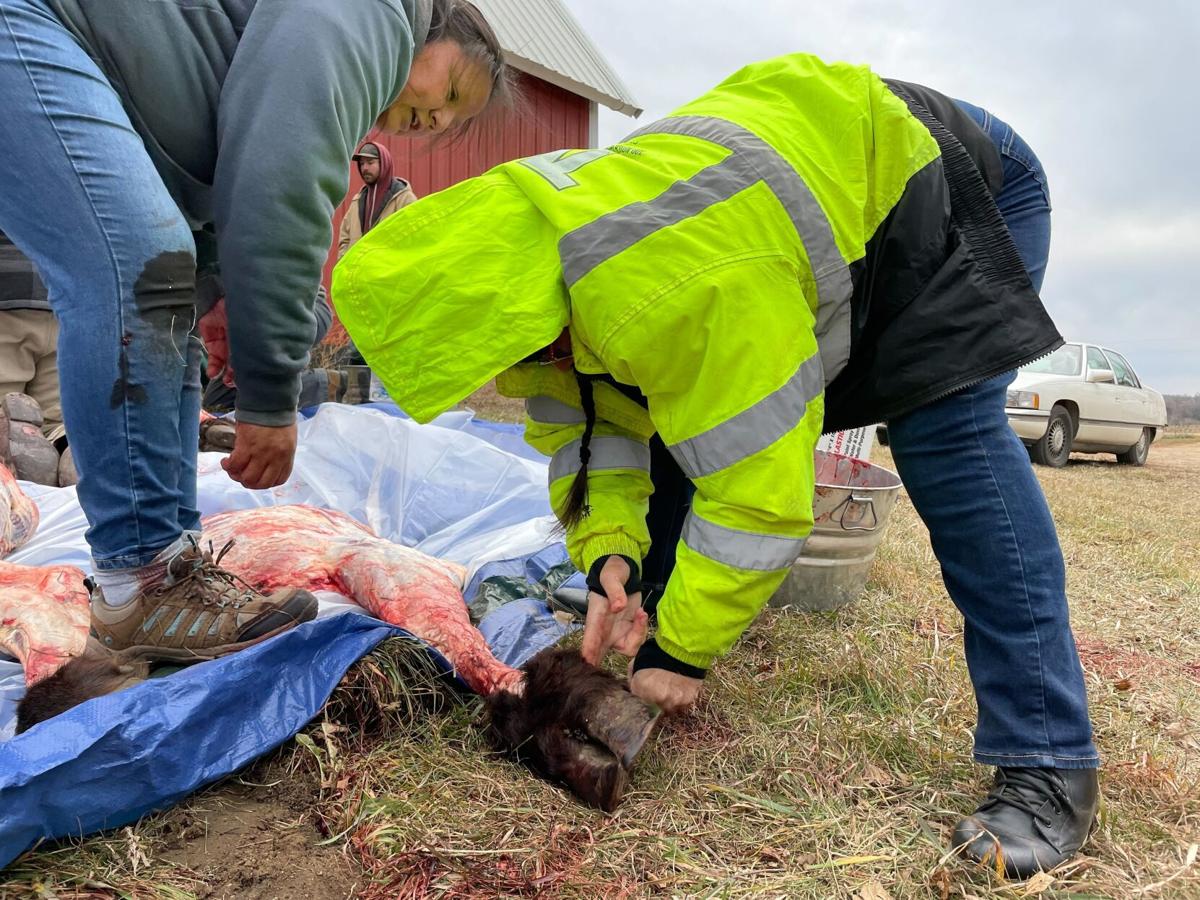 Marla Bull Bear bends over to cut off the hoof of a bison as Lisa Iron Cloud instructs her.

SANBORN — The 1,220-pound bison hung on the forklift by a chain tethered to its two front legs, its neck limp.

Two men grabbed either hind leg and walked alongside the machine as it drew closer to a grassy mound where those gathered would host a prayer ceremony over the animal’s body before harvesting its hide, meat, bones and insides.

“There’s an educational purpose for us to do this,” said Marla Bull Bear, executive director of Lakota Youth Development, which was founded in 1992. “We’re helping (youth) to reclaim their culture, their spiritual ways. And we consider the buffalo nation as a relative.”

Joined by her daughter Megan Schnitker, who owns Lakota Made natural goods store on Riverfront Drive, Bull Bear and more than a dozen other Lakota people had come from the Rosebud Indian Reservation of South Dakota to a farm at the halfway point between that state and Mankato. The bison farm is one of two owned and operated by Sleepy Bison Acres of Sleepy Eye.

Tribes followed tens of millions of Tatanka across vast swaths of the high plains, directly relying on America’s national mammal for shelter, tools and food. During the 1800s, Euro-American settlement and U.S. legislation decimated the bison population to hundreds.

Sunday’s harvest was also a practical demonstration of how to honor the animal’s sacrifice by making use of every body part. Several young people watched, and others will later see the process in educational videos.

“When we do this, it’s with prayer and it’s with ceremony and a respect and responsibility that weighs heavy on us because we take a life,” she said. “It’s not a sporting event.”

Craig Fischer, owner of Sleepy Bison Acres, said it was the first time he sold a bison for a Native American harvesting ceremony. The 2½-year-old bull he shot Sunday for Lakota Youth Development was kept calm early that morning so stress wouldn’t negatively alter the meat.

About an hour before the ceremony, Fischer rode an ATV to a fenced-in hillside where dozens of his 80 bison roam.

The Minnesota State University graduate said the animals have both a simple and complex appeal to him. They can run 35 mph and jump like deer and are plain “cool” to observe, yet they also embody a connection to the land that spans millennia.

The health benefits of the high-protein, low-fat meat hooked him because his grandfather died of a heart attack when Fischer was in high school.

Eight years ago he chose to enter the niche market. Now he feeds his kids and himself with heart-healthy bison meat, viewing it as akin to an insurance policy.

The Lakota reverence for buffalo and their resolve to eat or use the whole animal was crucial in his decision to provide the bull. Fischer’s goal is for “one bad moment” to infringe as little as possible on the life of contentment he tries to provide bison.

“With how cool these animals are, the history behind them, how many thousands of years they’ve been here and adapted to our lands, it’s hard not to respect them,” he said. “I think there’s something magnetizing about them.

“When we’re performing a harvest I want to continue to respect them throughout their life, and the harvest is one of the most important times of their life.”

Later Sunday morning, as Fischer prepared to fire his gun in an area separate from the group, people talked quietly. They became silent when a shot rang through the air.

Charles Bull Bear, Marla’s husband, has lived on the Rosebud Reservation his entire 64-year life. He said the Lakota culture is gradually disappearing as elders grow old and fewer young people devote time to native rituals. The youth organization has resisted the trend for decades.

Leaning against his pickup truck Sunday, he said he felt an emotional tie to his ancestors whose rugged survival depended on bison. He doesn’t take for granted that he can now easily get the meat and feed it to his grandchildren, who stood bundled up in coats and scarves nearby.

“They survived on what they found,” he said of his ancestors, “and only took what they needed.”

Fischer estimates the bull harvested Sunday will provide about 500 pounds of meat. Three and a half ounces of it contain only 2.4 grams of fat and 140 calories, statistics that along with its nutrient density make it a salve to the diabetes-stricken Rosebud Reservation.

The Rosebud Sioux tribe announced in May it will commit 28,000 acres of native grassland to support up to 1,500 bison, which would be the largest North American herd managed and owned by Native Americans.

The Department of Interior began sending bison from federally managed herds to Rosebud last fall and will continue to over a five-year span.

The population of Native-owned bison will increase by 7% if the project succeeds. Across the U.S. about 400,000 bison are raised as livestock and 30,000 are raised for conservation in public or private herds.

Native elders such as Jerome Kills Small, a 76-year-old who stood on the mound and led the prayer ceremony, task themselves with conveying a message of interdependence to younger generations.

Having been raised on the Pine Ridge Reservation of central South Dakota, he said his Lakota upbringing was second nature that he didn’t analyze before going to college.

When he noted others’ interest in the cultural and spiritual norms, he majored in English and linguistics as a way to share his part of the story. He went on to become a professor at the University of South Dakota, teaching courses in Lakota language and history along with American Indian thought.

Coming from a tradition of oral storytelling, part of his life’s focus is how to sustain rituals through which the word is passed.

One story he tells: During a Sun Dance, the most important religious ceremony historically practiced by the Lakota, his ancestors cut effigies of a man and a buffalo.

They then tied them to opposite sides of a large cottonwood tree felled for the ceremony.

The moral is Mitakuye Oyasin, a Lakota phrase which translates to “we are all related.”