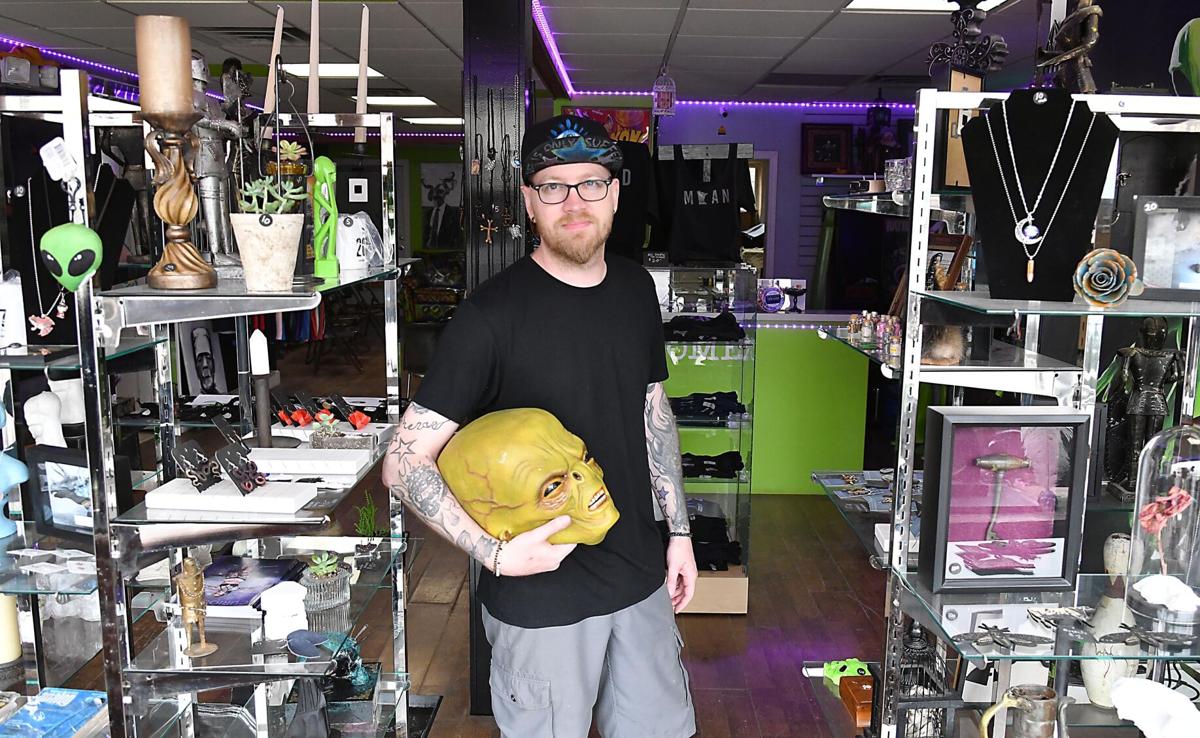 After initially opening a curiosities shop in Henderson, Steve Thaemert opened in the current location in Le Sueur. 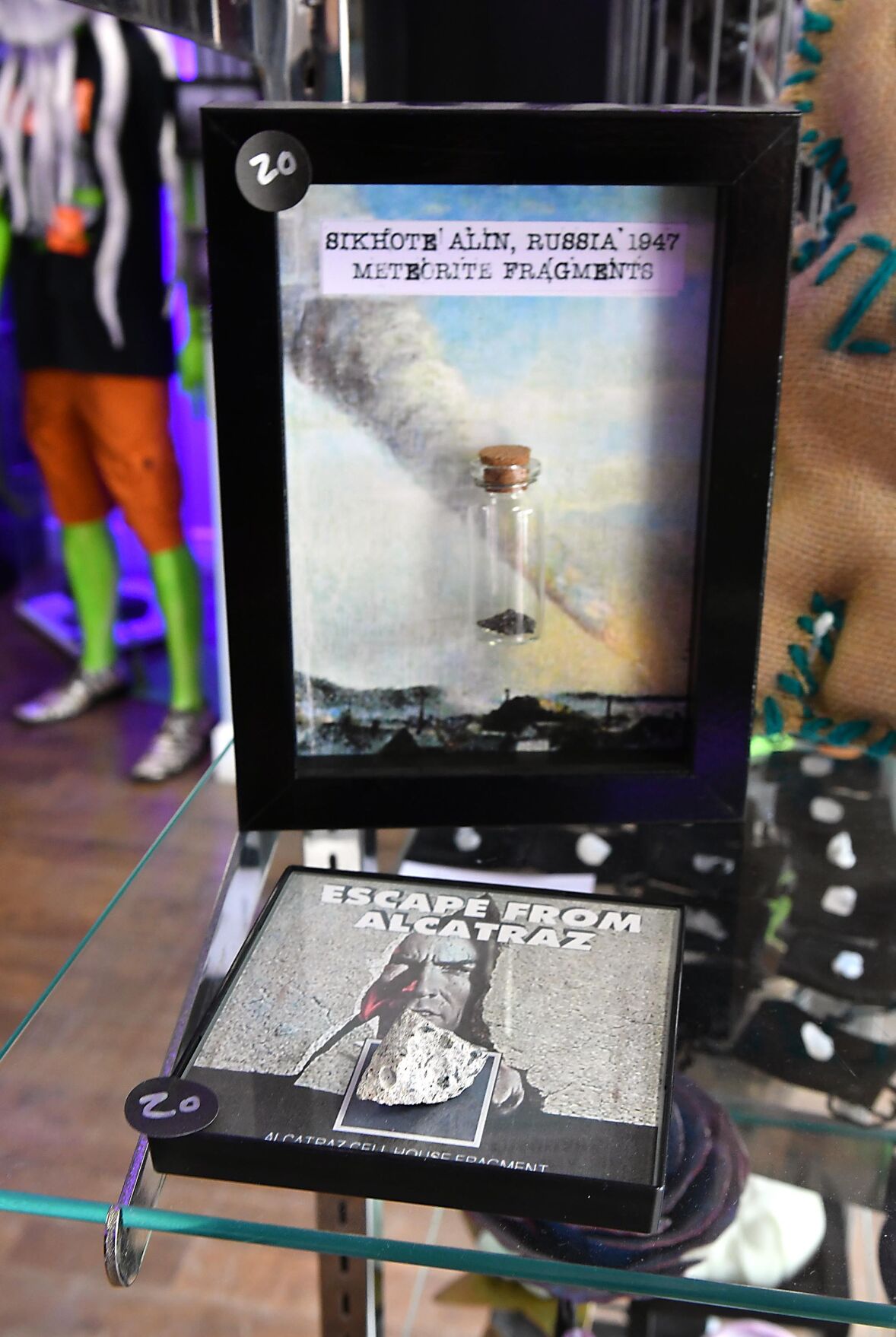 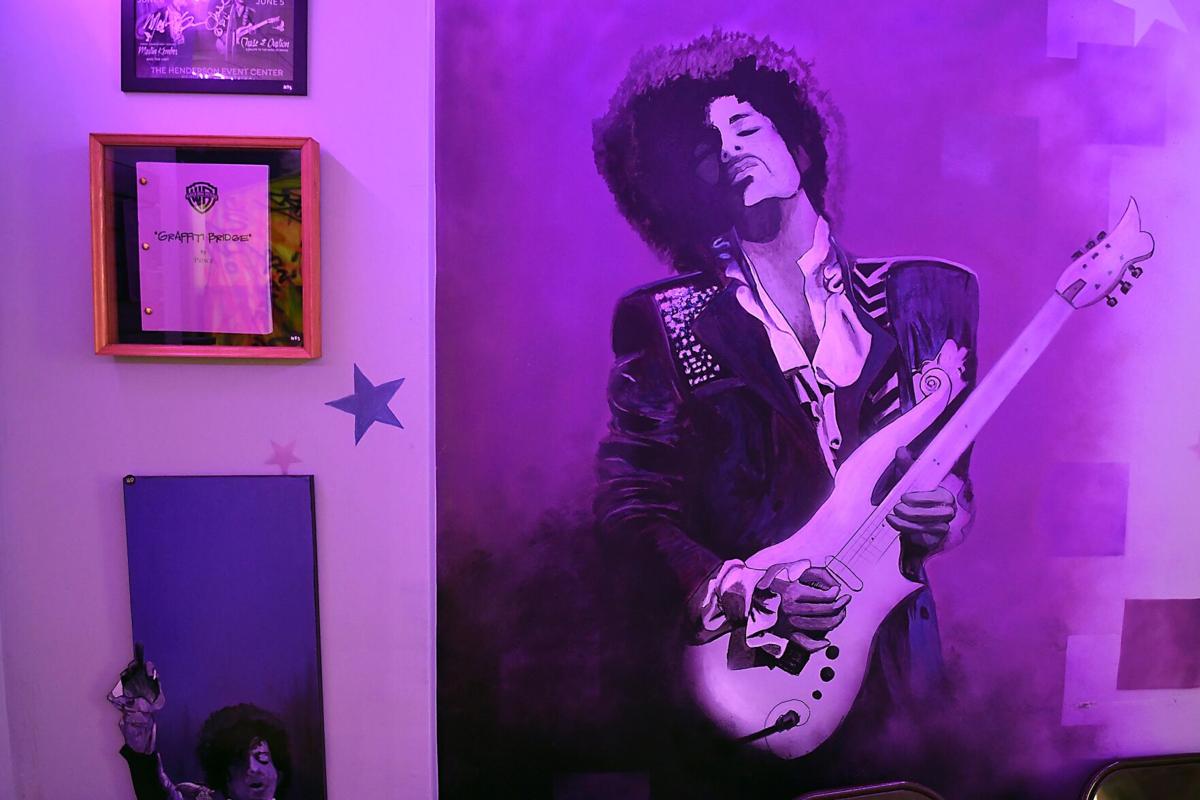 A giant Prince poster hangs in the 207 Curiosities shop. 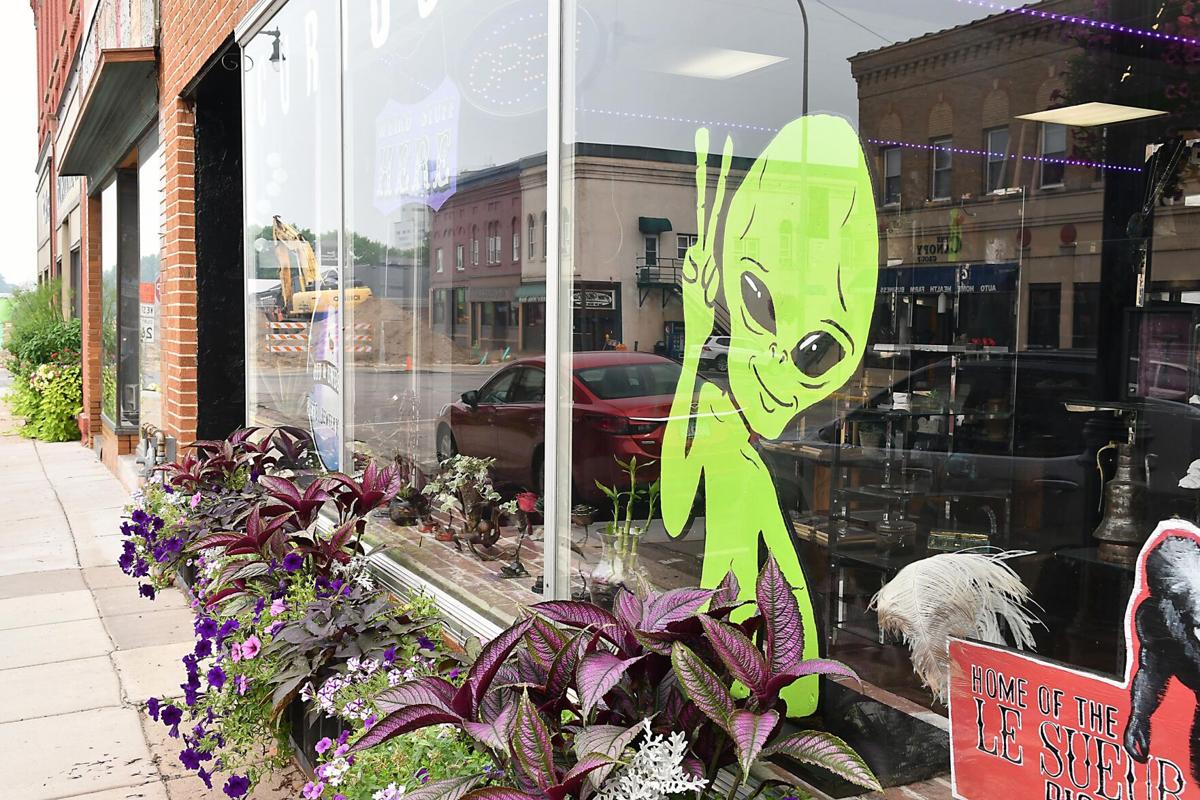 The 207 Curiosities shop is named after the street number it is located on on Le Sueur’s Main Street. 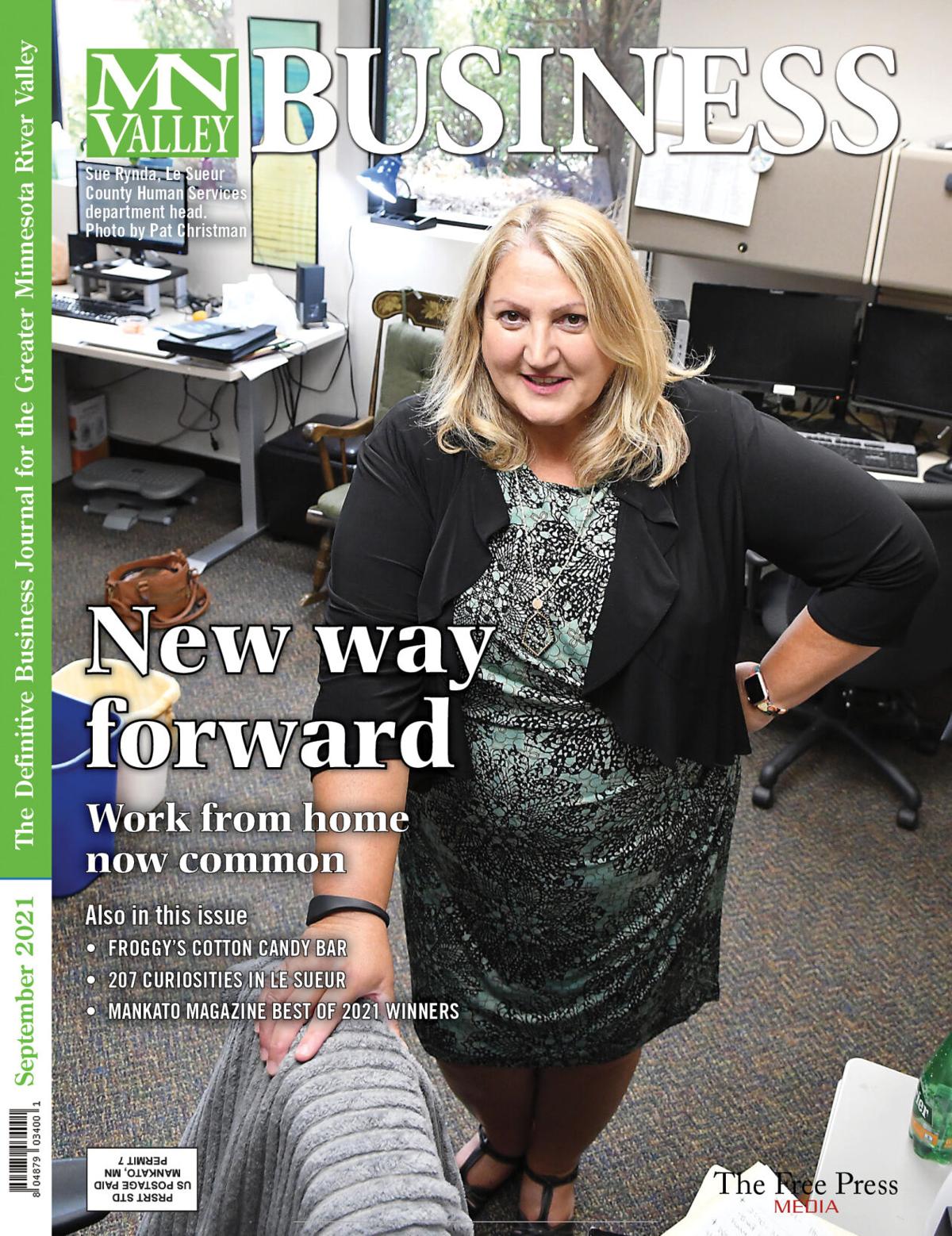 This article first appeared in the August edition of Minnesota Valley Business magazine. To order your subscription contact readerservice@mankatofreepress.com or call 625-3764.

After initially opening a curiosities shop in Henderson, Steve Thaemert opened in the current location in Le Sueur.

A giant Prince poster hangs in the 207 Curiosities shop.

The 207 Curiosities shop is named after the street number it is located on on Le Sueur’s Main Street.

This article first appeared in the August edition of Minnesota Valley Business magazine. To order your subscription contact readerservice@mankatofreepress.com or call 625-3764.

LE SUEUR — The words “curiosities” and “oddities” can have a thousand applications, from the way your coworker only wears red ties on Thursdays to your mother-in-law’s potato and prune salad. For Steve Thaemert of Le Sueur, the words mean something to be enjoyed and displayed, like a shadow box with vintage movie tickets or a gorilla hand cast.

Thaemert’s entry into the world of curiosities happened accidentally. Several years ago, the TV and video content creator founded a magazine called Rat Rod, which was devoted to home built hot rods and the enthusiasts who created and owned them. It turned out that the do-it-yourself, one-of-a-kind, collectable nature of homemade hot rods paired well with the curiosity and oddity community, which also celebrates the unique, artistic, retro, and salvaged.Although both “curiosity” and “oddity” can refer to similar categories of memorabilia and art, the categories have some slight differences.

“Oddities are a little bit darker,” Thaemert said. “There’s a lot of taxidermy and macabre and things like bones. Curiosities are more historic. There are more knickknack things, a little more art and handcrafted stuff and conversation pieces.”

Well and truly hooked by the weird and wonderful, Thaemert began publishing a second magazine called Curiosities. Around 2017, he took his interest a step further by opening a curiosities gift shop inside the Roadhaus bar and grill in Henderson. His friend Jake Crooks, a musician and fellow curiosities enthusiast who first connected with Thaemert through Rat Rod, was eager to help.

Although local and tourist interest was high, the first location opened by Steve and his wife Erin was short-lived. In 2018, the Minnesota River overflowed its banks, flooding access roads and temporarily making the town inaccessible. The city later took measures to prevent future flooding, but the lack of traffic hurt the curiosities shop, which was dependent on out-of-town visitors and Henderson’s weekly roll-in car shows.

Space constraints were also posing some difficulties. Thaemert described their area inside the Roadhaus as “gorgeous,” but also said that it was very small, with no work area.

“Maybe a curiosity shop next to a salad bar wasn’t the best idea,” Crooks said.

Despite the challenges, Thaemert wasn’t ready to give up one the idea of a curiosities gift shop. In early 2021, he and Erin stumbled upon a vacancy in Le Sueur that seemed just right for rekindling their dream.

“This town is an up-and-coming tourist town,” said Thaemert about his decision to switch locations. After signing a lease, the couple named their new shop 207 Curiosities after the building’s street number and set to work painting the walls with zany murals and tracking down merchandise.

One of Thaemert’s favorite things about curiosities is the creativeness they involve. Some of the 207’s stock is unearthed from flea markets and vintage sales, but a significant portion is handcrafted by individual artists. Both Thaemert and his wife make one-of-a-kind pieces for the 207’s sales floor.

“There’s a workshop at the store and we’re in there producing things as much as possible,” Thaemert said. “We might take an antique and turn it into something new. That’s what makes it fun – you can create something and put it out in the store, and someone will take it home and it becomes a part of their life. It’s pretty awesome.”

Crooks’ merchandise can also be found on the 207’s display shelves. He created wrist pockets, which are leather or fabric wristbands that can adhere to leather jackets with snaps and have storage pockets deep enough to hold a credit card or money.

“I make all of my own clothes,” Crooks said about getting started in wristband-making. “It’s not like Little House on the Prairie where you make your own sundress – I modify thrift store finds to look kind of Mad Max. I had this one type of cool spike bracelet that I would make all the time, and then I made a bracelet with a pocket and everyone asked me where I got it.”

When the new location opened on June 5, 2021, Thaemert said that he knew he wanted the 207 Curiosities to have something for everyone, from snappy dressers looking for a unique accessory, to nostalgia buffs hoping to discover classic movie memorabilia, to younger kids excited by cool aliens and funny posters.

As another way of creating traffic and giving his community something fun to do on a weekend, Thaemert has scheduled a rotating mix of comedians and musicians who perform a few times a month. Crooks has also performed in his friend’s store and said he enjoyed seeing the foot traffic marvel at the store’s displays.

Overall, the visitors’ excitement is what Thaemert likes best.

“You can have a dollar in your pocket and walk out with something fun, which is really important to us,” Thaemert said. “It’s not a cash-grab type of business, it’s about trying to create an experience. People come in and have a big smile on their face and they leave with a big smile, and that’s how I gauge our success.”