High cost of Russian gains in Ukraine may limit…

Many won't rely on virtual options after COVID:… 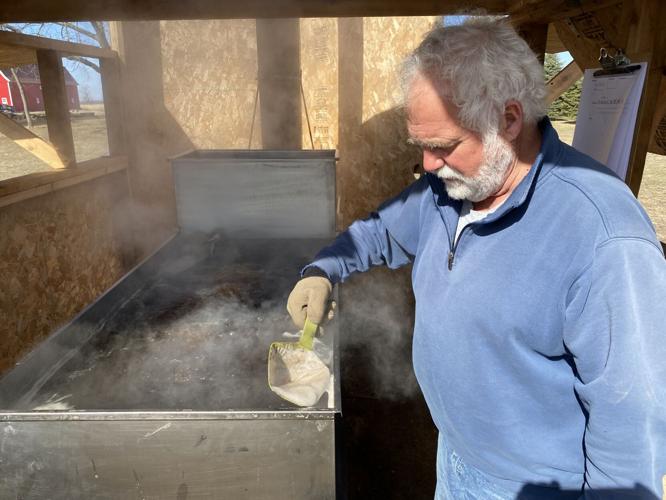 Ney Nature Center board member Mick McGuire uses a scoop to filter sap as it boiled down to syrup near Henderson Saturday. “By skimming the foam off, it cleans the sap as it starts to boil,” he said. 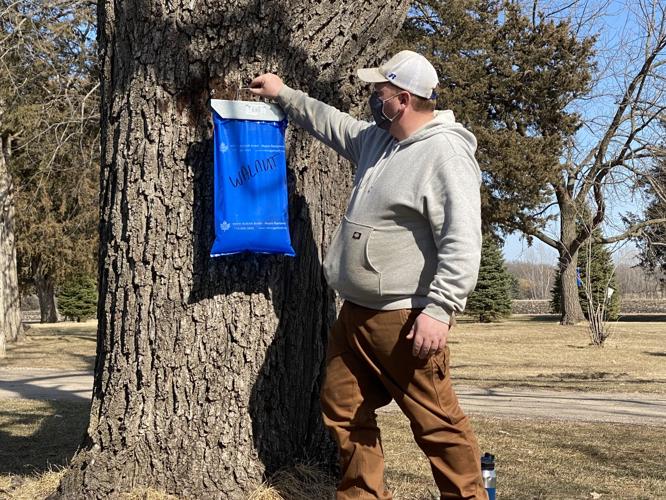 Alex Colling taps a walnut tree to collect sap at Ney Nature Center Saturday. Many trees can produce sap, but the preferred maple trees have a higher sugar content than the others. 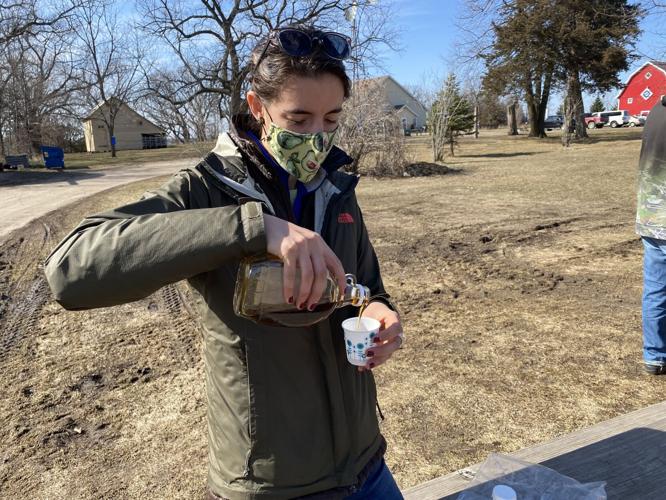 Ney Nature Center board member Mick McGuire uses a scoop to filter sap as it boiled down to syrup near Henderson Saturday. “By skimming the foam off, it cleans the sap as it starts to boil,” he said.

Alex Colling taps a walnut tree to collect sap at Ney Nature Center Saturday. Many trees can produce sap, but the preferred maple trees have a higher sugar content than the others.

MANKATO — For Tyler Zollner, a maple syrup producer for Sugar Shanty Syrup near New Ulm, keeping a close eye on the weather forecast is a vital component of knowing when to tap trees each season for sap.

“I always watch the forecast very closely once February starts rolling around,” Zollner said. “We need movement of sap and ultimately the thawing and freezing is what does that.”

He said the season started around the usual time this year, between late February and early March. But for Zollner and other area producers, the maple syruping season hit a roadblock last week when low temperatures remained above freezing for several days in a row, halting the flow of sap to a mere trickle.

Up by Henderson, Alex Colling has noticed the same thing. The resource manager at Ney Nature Center said the sap began running right away when they tapped all of their trees by March 1, but then the warmer weather arrived.

“It was really good until last week; on Tuesday and Wednesday it got really warm and didn’t freeze at night,” Colling said. “Trees were still running a little bit but not enough to create a good flow like we usually see, so it’s been a fairly slow start to the season overall.”

Bil Carda, who co-owns Under the Sun Herbs, a farm near Madelia with partner Alise Torgusen, said they haven’t collected nearly as much sap compared to the previous year, when their 40 trees produced about 520 gallons of sap. Once boiled down, that yielded about 13 gallons of syrup.

“We haven’t collected as much as the same time last year,” Carda said.

He said ideal temperatures for sap collection are daily highs in the 40s and then enough of a drop in overnight temperatures to freeze again. The push between above and below freezing temperatures in a 24-hour period is essential to keep the sap flowing.

“That creates a cycle where the sap gets drawn up and then comes back down,” said Carda, who sells their syrup at farmers markets along with a variety of herbs. “On its way back down, we catch it.”

Sarah Fischer and her husband, Tom, who primarily raise pigs, chickens and cattle on their pasture farm near Lafayette, began collecting sap for personal use six years ago. It’s become a family activity each year, with the neighbors and their kids helping out as well.

“For us, it was wanting to get away from processed sweeteners,” she said. “Our primary sources of sweetener are maple syrup and raw honey.”

Last year they produced almost twice as much as they needed – nearly 20 gallons, so they decided to cut down this year to 100 taps.

While the sap hasn’t been running as fast as usual, their goal this year is to collect enough sap to produce 10 gallons of maple syrup from 400 gallons of sap.

The warmer weather has led to another concern though – some trees are beginning to bud, which can be a sign that the season is ending. That can vary significantly by location, even between a set of trees just a mile or two away from each other depending on how much sunlight they receive.

“When the leaves on the trees start to bud, the syrup turns bitter as you cook it,” Zollner said. “Some of the trees in town have started to push buds. My trees are down at a river bottom on a north facing hillside, so we are always a few days behind some of the other trees.”

Tyler Hering, who co-owns Hering’s Maple Syrup along with his brothers and father near Waterville, said the location of their 35,000 taps on maple trees in forested areas helped to insulate last week’s above-freezing low temperatures on their trees.

“Even though we had that warm weather, there’s still frost in the woods,” Hering said.

That frost means it takes longer to thaw and produce sap at the beginning of a new season, but it can also potentially extend sap production later into the season as the trees bud later than others. As of Friday, Hering said they had produced 150,000 gallons of sap so far.

He said he’s heard from other producers who are worried as to whether the flow of sap can make a comeback, but that will depend on climate and weather – two factors beyond their control. His vacuum pump system helps to extract a higher yield, but smaller scale operations using buckets or bags to collect the sap as it trickles down the tree trunk are more affected by changes in weather.

“If it stays cool, we’re going to have an average season,” Hering said. “But if it would have kept up with the weather that we had last week, the bucket guys would have a terrible season.”

While some may be less than enthusiastic about another winter storm expected Monday in the Mankato area, Colling said it’s actually good for maple syrup producers by extending the season and slowing the growth of buds and leaves.

“If we get the snow like it’s forecasted, it will cool the trees down,” Colling said. “Usually right after one of those snowfalls, we’ll see a really good flow that following day. A good cold sweep and some snow will refresh the trees sometimes. It’ll wake them up again and run a little longer.”