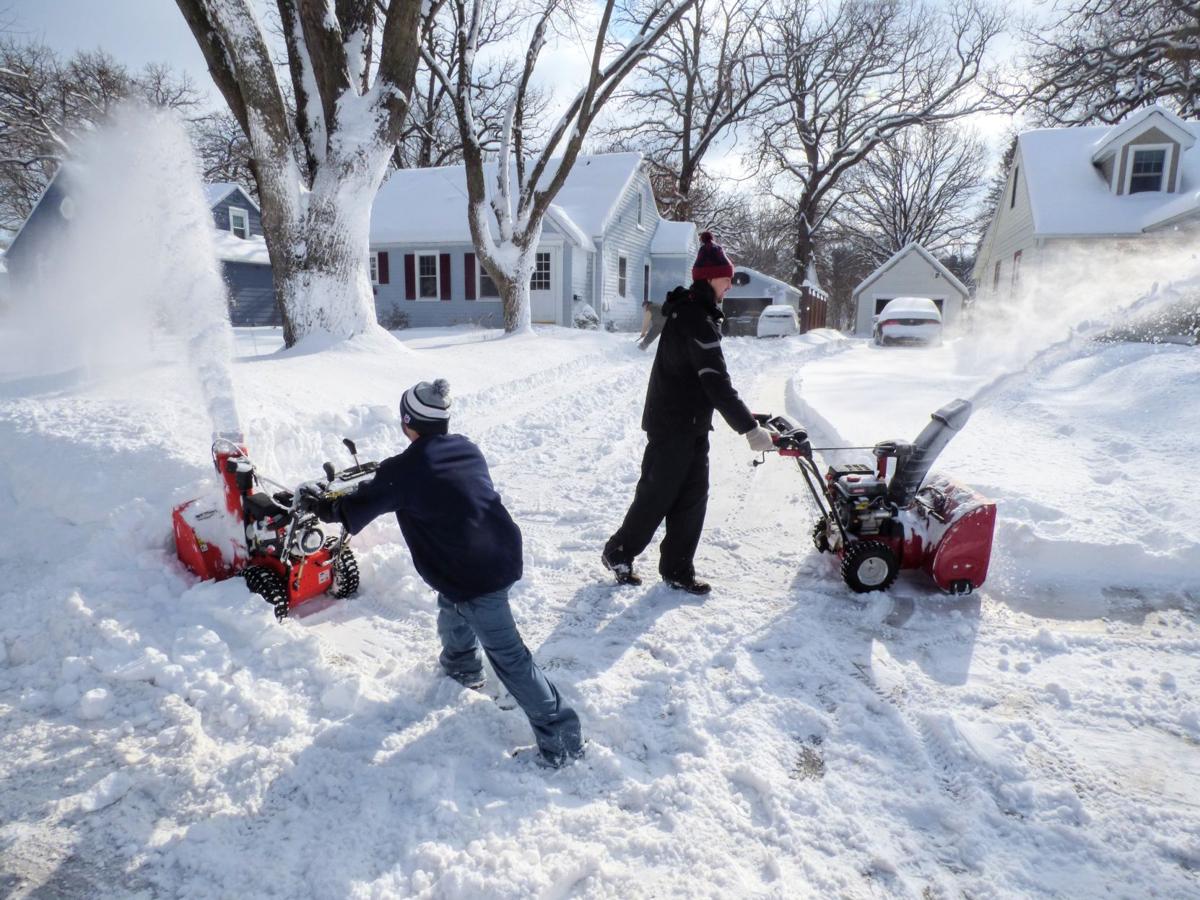 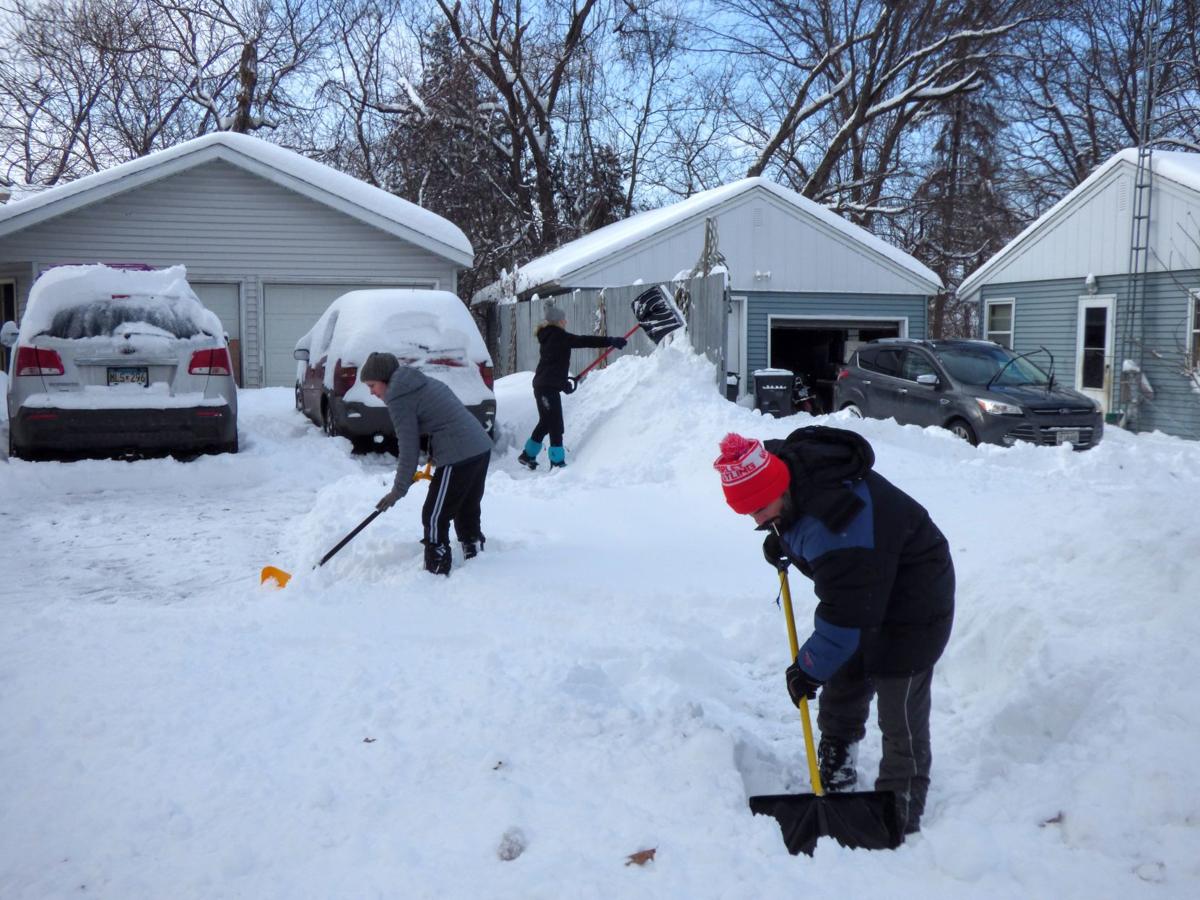 Joel Leonard shovels his driveway with the help of his wife, Carol Leonard (right) and daughter Elise Leonard (center) Sunday afternoon in Mankato. 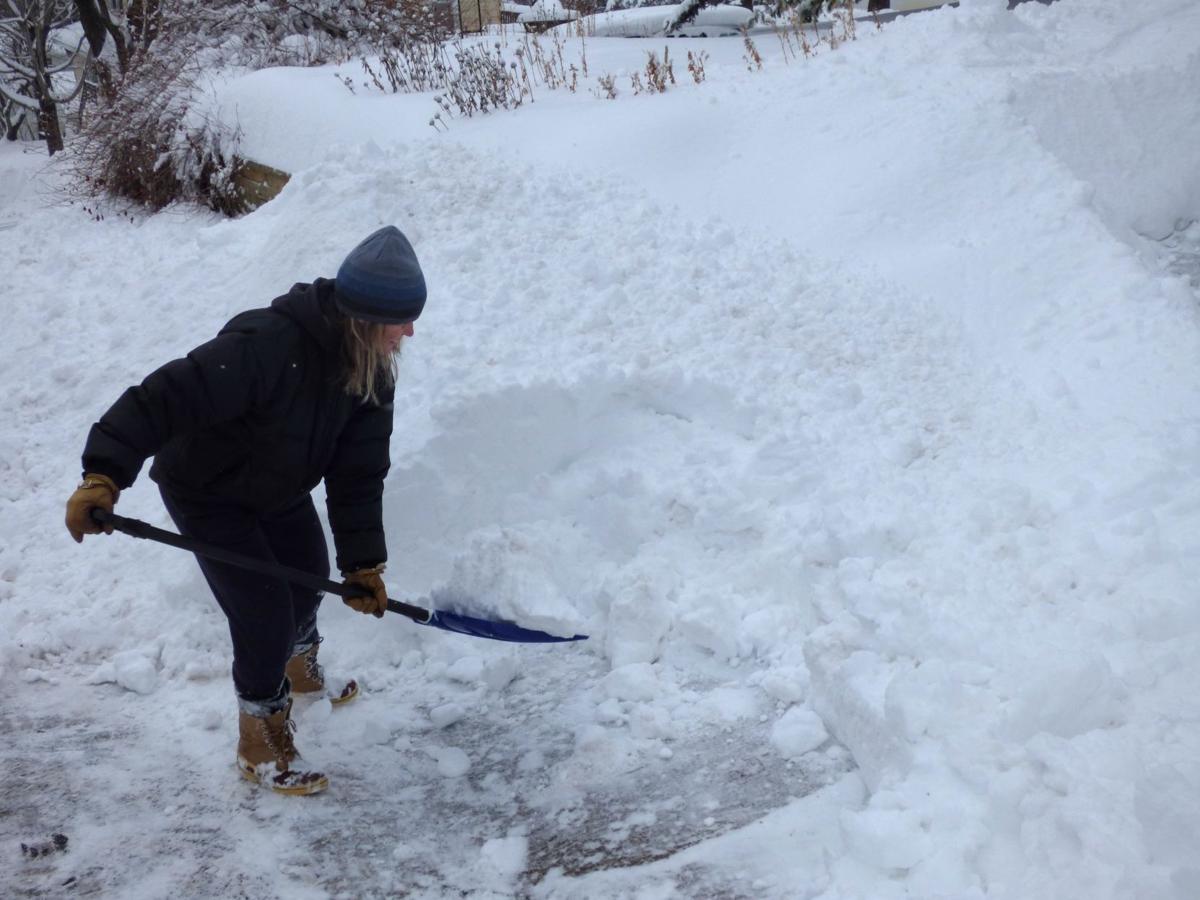 Joel Leonard shovels his driveway with the help of his wife, Carol Leonard (right) and daughter Elise Leonard (center) Sunday afternoon in Mankato.

MANKATO — Nearly a foot of snow fell on Mankato between Saturday night and Sunday morning as a storm pushed through southern Minnesota from South Dakota.

According to the National Weather Service, 11.5 inches of snow fell on Mankato by Sunday afternoon. Waseca had a total of 10 inches and New Ulm had 11 inches of total snowfall.

Lake Crystal was hardest hit by the storm in Minnesota, blanketed by 15.5 inches by Sunday afternoon, and the I-90 corridor, forecasted to receive the highest snowfall, received far less, with 5 inches reported in Blue Earth and 6 inches in Fairmont.

Chris O’Brien, a meteorologist with the National Weather Service in Chanhassen, said the storm became stronger as it arrived in western Minnesota.

“There was a compact little piece of energy that was coming across from South Dakota and there was a frontogenesis — the clashes of the air, and that’s what’s led to the moist air being lifted just south of the Twin Cities,” O’Brien said.

“We had the moisture and a front coming through and it was forming and getting stronger.”

The heaviest snowfall in the Mankato area occurred between midnight and 6 a.m. Sunday, according to Todd Krause, a forecaster with the NWS Chanhassen office.

Many residents took advantage of the sunshine following the storm to shovel and snowplow their driveways Sunday morning.

Carol Marston, of Mankato, got a head start before the sun rose, and came back around 10 a.m. to finish her driveway.

“I’ve been out here for quite awhile,” Marston said.

According to the Minnesota Department of Transportation, plows were able to clear Highway 169 from Mankato to Le Sueur, and Highway 22 from a few miles south of Mankato to St. Peter by Sunday afternoon, although several county roads and major highways to the west and east of Mankato were still partially covered in snow as of Sunday night.

MnDOT reported a crash on Highway 14 and a couple spinouts caused by the storm to the west of Mankato, but Blue Earth County Sheriff’s Deputy Nathan Dobie said they only had a few calls for crashes and spinouts by Sunday afternoon.

“As far as today we’ve had a couple in the ditch, but that’s about it,” Dobie said. “Blue Earth County drivers know how to drive. We’ve had one reported vehicle stuck in the road out on the county line by Madelia.”

While it may have been a headache for drivers, skiers at Mount Kato took advantage of the near foot of snow to hit the slopes with plenty of fresh powder.

General Manager John Nelson said turnout from locals typically increases after a storm, although it makes travel difficult for skiers coming from out of town.

“We’ve been busy today,” Nelson said. “I think at this point there were probably about 600 skiers and about 50-60 tubers. We get a lot of locals that end up coming out, but I’m sure it’s affected people coming from northern Iowa and Sioux Falls.”

The cities of Mankato and North Mankato each announced snow emergencies. Mankato’s snow emergency begins Sunday at 8 p.m., ending Monday at 8 a.m. meaning no parking is allowed on city streets during the emergency.

The City of Mankato had seven salt trucks out on Saturday night and 23 snow plows early Sunday morning to clear snow from hills, major roads and residential streets.

North Mankato also announced a snow emergency Sunday — beginning at 12 a.m. Monday — and will be lifted after all streets have been plowed. No parking is allowed on city streets until they are plowed, although the city is providing free parking at seven parking lots in the city, including Spring Lake Park, lots beside and behind the American Legion, Wheeler Park and Caswell Park lots.

In Mankato, there is free parking during the snow emergency at Mankato Place and Civic Center parking ramps.

O’Brien said the weekend’s storm is probably going to be the last significant snowfall for a few days at least, with the temperature dropping by midweek.

“It’s going to be staying in the mid to upper 20s and sunny through Tuesday,” O’Brien said. “Wednesday we’ll have to watch for a slight chance of snow with 34 degrees for a high and then Thursday the high is only 6 degrees.”