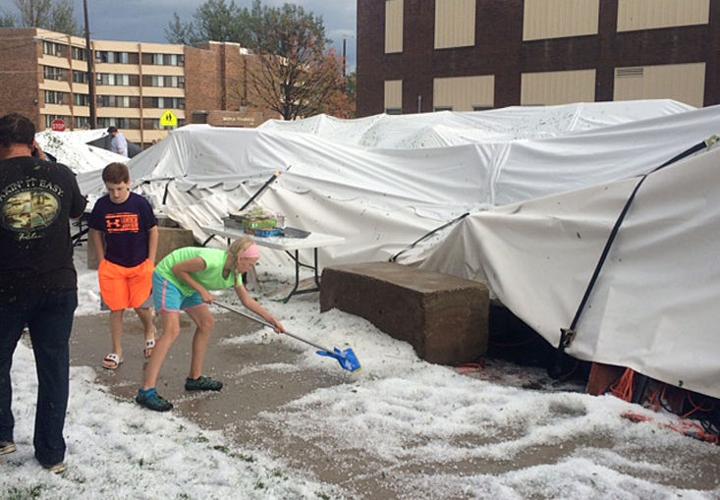 Cora McCabe of Waseca pushes hail in front of a collapsed tent that had been set up for the Sacred Heart Catholic Church fall festival. The tent fell in the storm Saturday. Photo courtsey Ann Gaytko 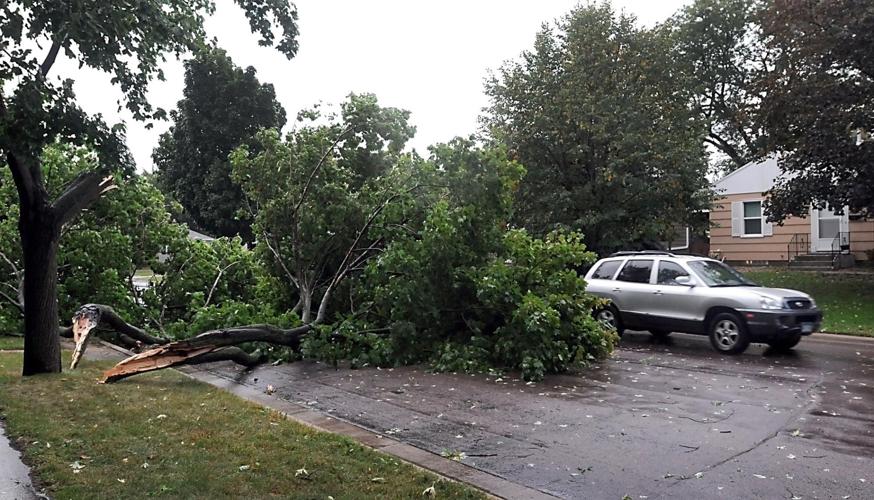 A tree branch felled by a brief but strong storm blocks most of Blue Earth Street Saturday evening. Photo by Pat Christman

A person photographs a large tree branch that fell over a truck Saturday evening in Mankato. Photo by Pat Christman

Cora McCabe of Waseca pushes hail in front of a collapsed tent that had been set up for the Sacred Heart Catholic Church fall festival. The tent fell in the storm Saturday. Photo courtsey Ann Gaytko

A tree branch felled by a brief but strong storm blocks most of Blue Earth Street Saturday evening. Photo by Pat Christman

The storm appeared to make the strongest impact in Waseca, where a brief surge of wind and hail caused a tent to collapse at the Sacred Heart Catholic Church's fall festival.

Church parishioners Bernie and Ann Gaytko were working the concession stand inside the tent when the storm came through. When the wind picked up, they went and stood in the southwest corner of the tent, Bernie Gaytko said.

“We just thought we were going to ride out a quick burst of rain,” he said.

Gaytko said the tent started heaving and the beer cart starting moving toward them. “We all huddled together and just didn't know what to do,” he said.

The storm stopped for a second and the wind came in from another direction, he said. That went on for another 30-45 seconds, he said, and the tent then collapsed. That was then they ran out.

Gaytko said there were three or four slight injuries but everyone was safe for the most part. He said no one was trapped underneath the tent, though the adults at the scene tore apart the tent to look for anyone trapped under.

Church parishioner Tim Muotka was in the church for Mass when the tent collapsed. He said the hail was marble-sized.

“The hail just came down in buckets,” he said. “It was like snow on the ground...It hit real fast and caused a lot of damage and a lot of standing water in town. It hit everywhere. It was a mess.”

Waseca mayor Roy Srp said there were a lot of trees down around town and the Birds Eye plant and the Federal Correctional Institution, Waseca sustained damage.

At the annual Waseca Marching Classic, organizers had to pull the bands from the Waseca Senior High School athletic field, said Les Tlougan, a member of the event committee. Organizers were not able to hand out awards for the field portion of the event, though the Rochester Lourdes, Waseca and Minnesota State bands later put on shows in the Waseca gym, Tlougan said.

In Mankato, a portion of west Mankato was without power Saturday evening. Most of Blue Earth Street was blocked by a large tree branch that had fallen across the road. Homeowners on the west side of Mankato were cleaning up branches Saturday and leaves littered roadways as the sun came out shortly after the storm.

Mankato Public Safety Cmdr. Jeremy Clifton said there were two reports of property damage in the city, both involving trees falling down on personal property. He said some power lines were down but no personal injuries were reported.

A power line near Sibley Park went down around 5:15 p.m., according to Jim Regenscheid, who lives on Mound Avenue. He said the power line over his neighbor's house snapped and tree branches were laying in the street in the storm's immediate aftermath. He said two neighbors' houses were without cable and some cable wires had been ripped off but there was no property damage other than the downed trees.

Trees were downed in New Ulm but no houses were hit, according to police Sgt. Jeremy Reed. He said no structural damage was reported.

A Nicollet County Sheriff's Office dispatcher said there were trees down in the county but that was about it.

Photographer for the Mankato Free Press.