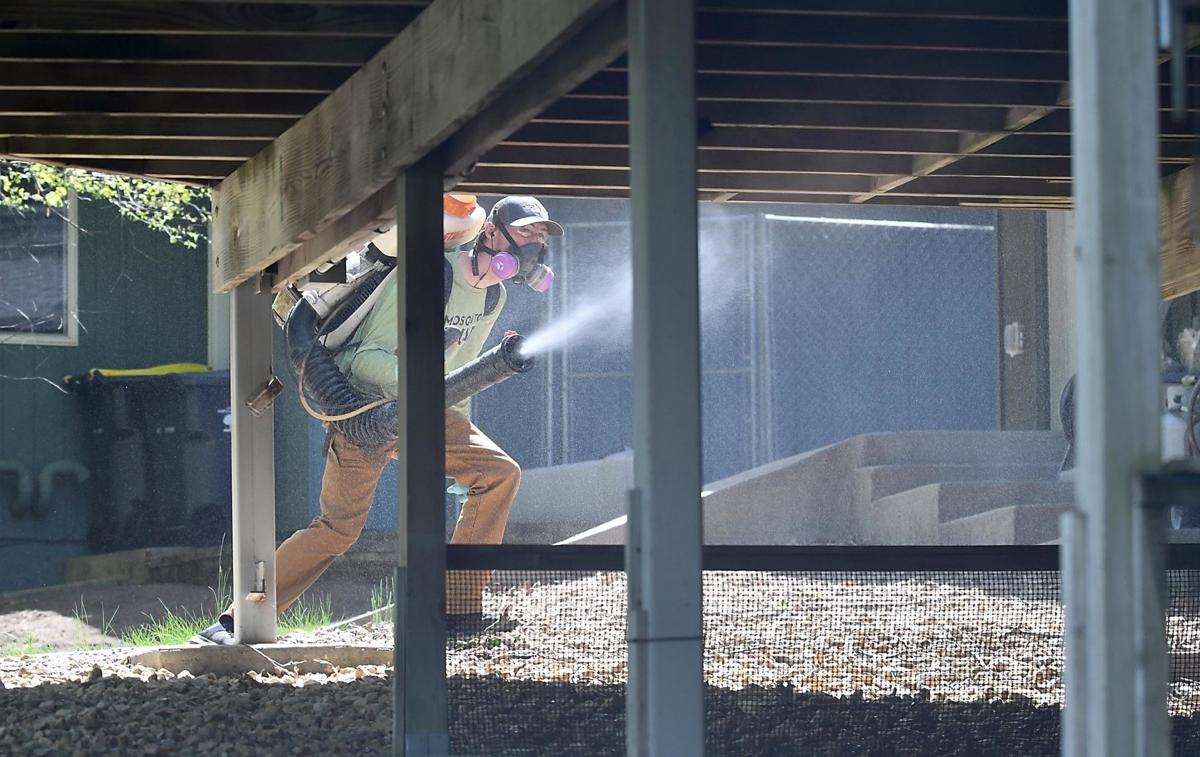 The Mosquito Squad’s Zach Zink sprays for mosquitoes under a deck in North Mankato. 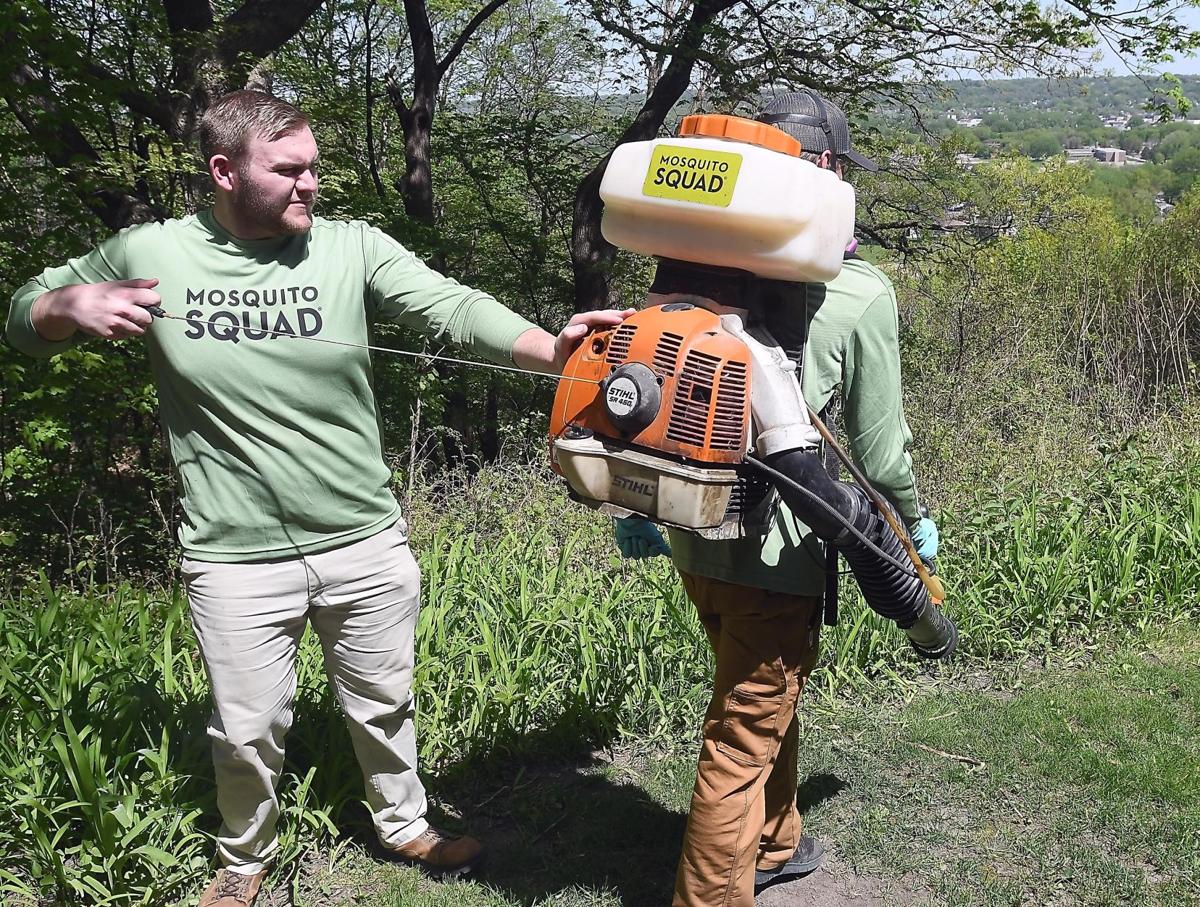 The Mosquito Squad’s Zach Zink sprays for mosquitoes under a deck in North Mankato.

When Jason Quint and his wife, Heather, moved to a new country home outside Mankato a few years ago, they were ready to enjoy the wide open spaces. But they hadn’t factored in the mosquitoes ready to enjoy them.

As they explored ways to curb the bugs, the Quints stumbled across a business opportunity. Experience told them there was a healthy demand, and they figured they could do a better job than the existing pest-control companies.

He always wanted to start a business and the couple found an opportunity with a franchise called Mosquito Squad. The Richmond, Va., company opened in 2004 and has about 220 franchisees.

He didn’t have any pest control experience — he works as an engineer — but says he was trained well by the company. Still, he remembers being nervous on his first job two years ago.

“I probably was 10 times more thorough than I had to be,” he says. “That cost me money but they saw that and referred their friends.”

In the years since, the couple and their staff have learned where to focus, but finding mosquitoes and the places they breed can be tricky. A female needs only a bottle cap full of water to lay 300 eggs, Quint says.

From his perspective, the real challenge wasn’t finding those eggs or even the mosquitoes. It was finding the right people.

Quint kept his day job after starting the business, and it soon grew to the point where he could no longer service his customers on evenings and weekends. Finding the right employees wasn’t easy.

“It was a helluva lot more challenging than I expected,” he says. “When you do a job you know whether it’s done right, but when you’re hiring people you’re training them to do it as you would want it done.”

When a business is in its infancy, even a small number of mistakes can kill it. Leaving the bugs alive is a problem, but a bigger one is disappointing a customer.

“They’re not rolling up with music blaring or looking sloppy,” he says of his employees. “It’s a tough job, so I find a younger demographic can be good workers, but I have to make sure they assume somebody is watching at all times.”

Referrals are their No. 1 source of new customers, so keeping existing customers happy is vital.

Of course, they also have to kill the bugs.

As frail as a mosquito is, their eggs are hardy. They can last through the winter and the larvae — wriggly, tiny worms — hatch as the spring rains begin. They can go from just-hatched larva to biting fly in a week.

Mosquito control companies have to kill both larval and adult mosquitoes. Like many others, Quint’s company kills the little worms with even tinier bugs — a naturally occurring soil bacterium. They treat any area of standing water, no matter how small.

The adults are a little trickier. The company sprays decks, trees and other surfaces mosquitoes might land on. The chemical kills mosquitoes when they land on the treated surface for between two and three weeks after it’s applied, he said.

This is why the company returns to customers’ properties every three weeks throughout mosquito season. They can’t promise to kill every single bug, but Quint says their main chemical gets rid of between 85 percent and 90 percent of mosquitoes.

Mosquito Squad has some tips to help people cut down on mosquitoes:

Get rid of standing water, including underneath downspouts, dog bowls and plastic toys.

Talk to your neighbors. A mosquito that hatches next door may not stay there, so coordinate pest control with the people around you.

Remove excess grass, leaves and firewood from your yard.

It’s a natural question for customers and their neighbors: What chemical are you spraying, and how might it affect my family and pets?

His staff ensures that children and pets are not outdoors during spraying, in part to avoid workers from being bitten by dogs. After the chemical dries, it is safe for kids and pets, he said.

The chemical can be toxic to bees, so Quint’s company doesn’t treat blooming flowers, he said.

“I have bees on my property, and I don’t treat anywhere they’re going to be foraging for pollen,” he said. “We want to be good stewards of the environment.”

The Environmental Protection Agency says pyrethroids “do not pose risk concerns for children or adults.”

Quint says that’s true as long as the chemical is applied according to its label and allowed to dry.

“It’s no different than the household cleaners you have in your house,” he says. “You have to be conscious of what you’re doing.”

The company also has an all-natural chemical option, though it is a little less effective. Quint says it gets rid of about 80 percent of mosquitoes.

“We treat a lot of daycares with that,” he says.

When he acquired the franchise, Quint bought the right to be the sole Mosquito Squad operator in southwest Minnesota, from South Dakota to Albert Lea.

But it’s not profitable to service far-flung cities; the business tends to stay within an hour of Mankato.

“Driving is a killer on costs,” Quint says.

He said the company is focused on doing a good job with existing customers — retention from year to year is critical — and finding new ones.

Meanwhile, Quint has kept his day job as an engineer. He typically rises at about 4:30 a.m. and works on Mosquito Squad business before going to work.