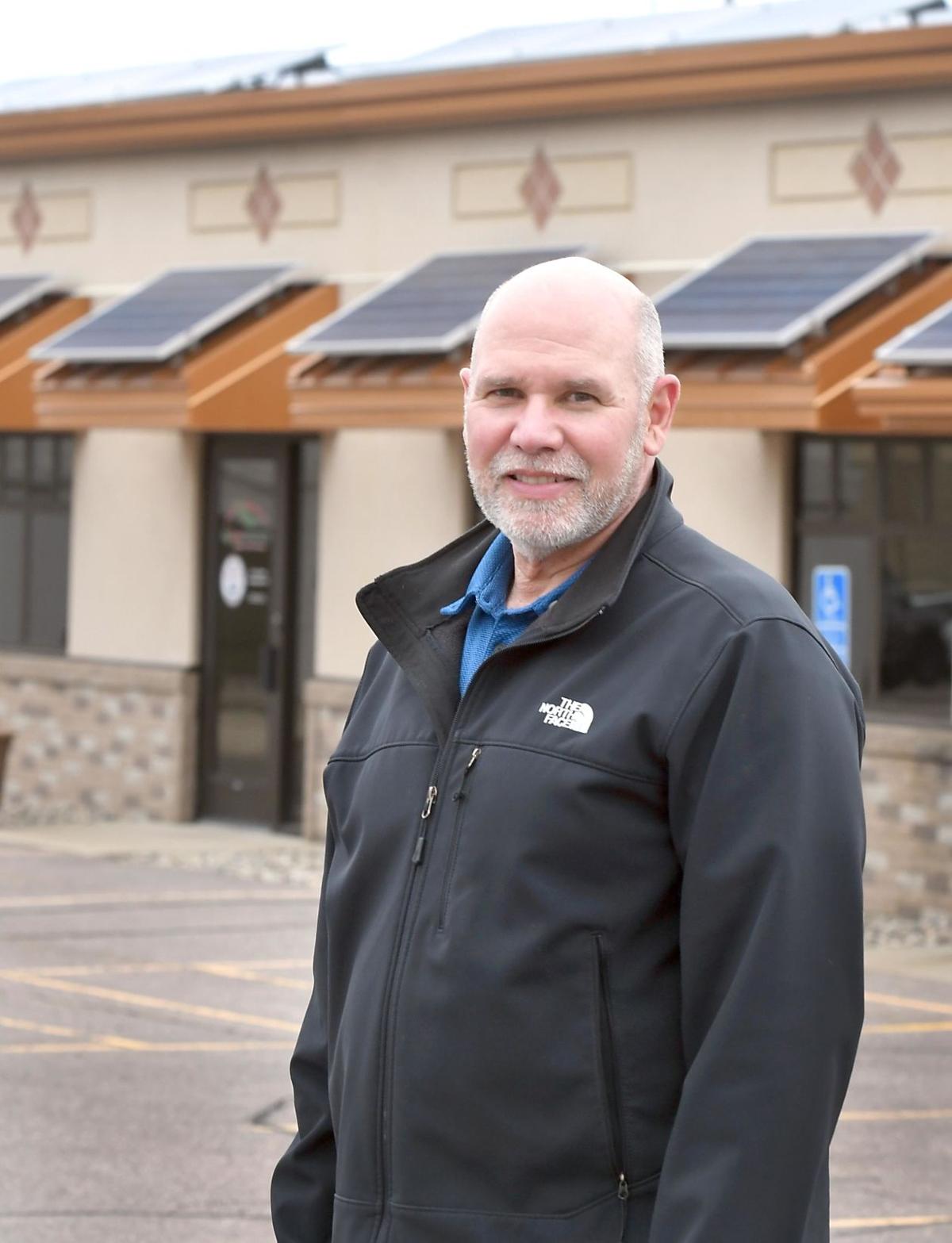 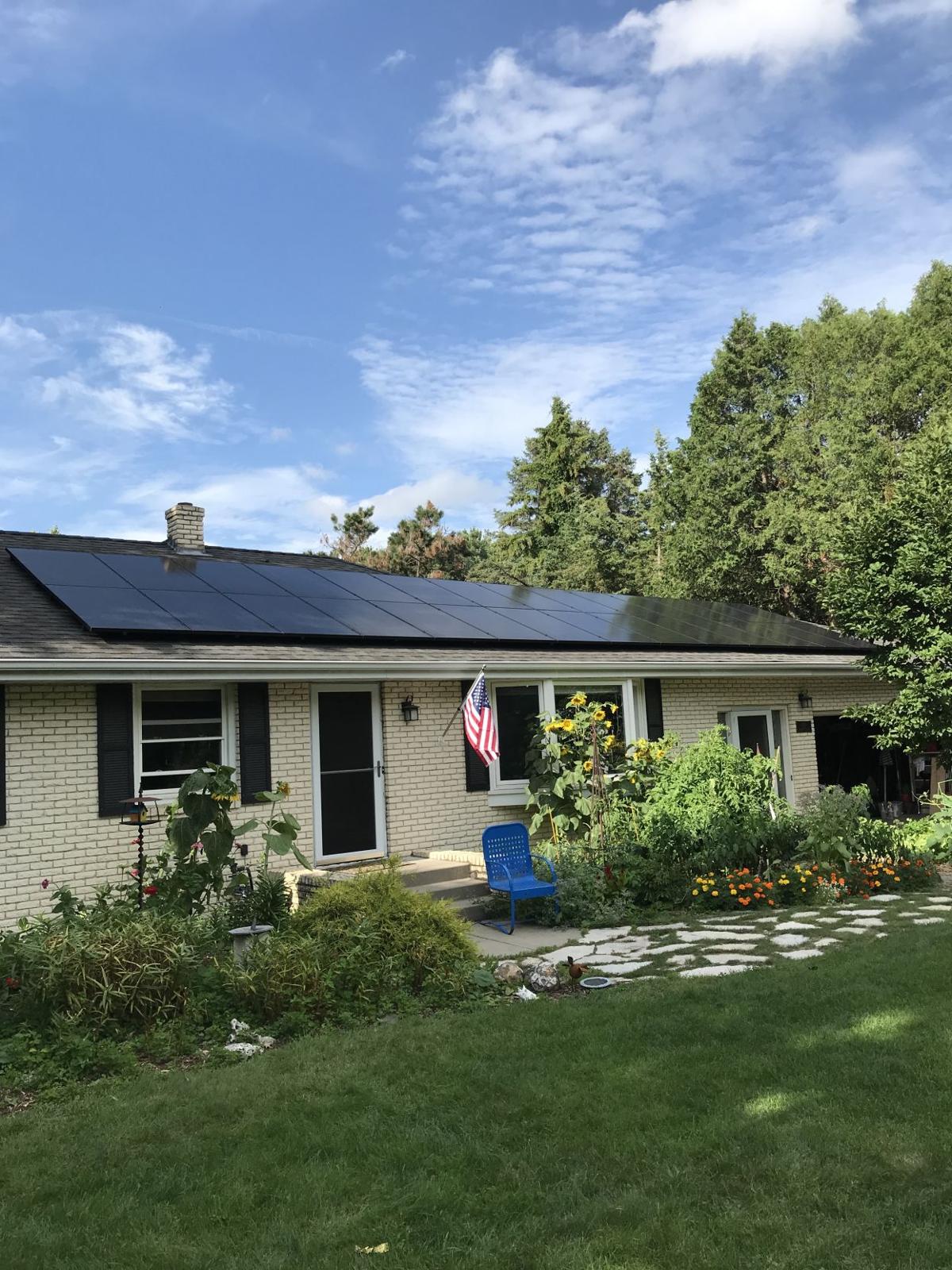 A rooftop solar array installed by All Energy Solar. 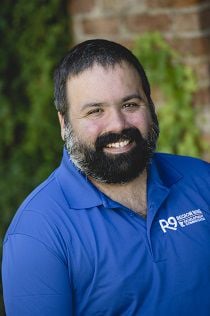 A rooftop solar array installed by All Energy Solar.

Thomas Rekstein no longer minds looking at the electric bill for his Great River Insurance business on North Riverfront Drive.

Rekstein, who had 38 solar panels installed on the roof and awnings of his building, said the investment was well worth it.

“It’s been great. I’d recommend it to anyone.”

Solar power continues to grow throughout the region and state, helped by federal and state incentives and by desire to lower electric costs and reduce reliance on coal and natural gas.

Mike Allen, CEO and co-founder of All Energy Solar, said their work in Minnesota and surrounding states has grown rapidly in recent years.

“If you’re going to pay your electric bill, you’re going to pay it the rest of your life — it’s like renting electricity. If you take control and buy your solar system, after that loan payment, you’re done and you don’t have to pay any more,” Allen said.

Joel Hanif, community development planner for the Region Nine Development Commission, hopes to help spur even more interest in solar by getting the region qualified as a SolSmart designated region.

“There’s no guaranteed funding that comes with it, but it might make Region Nine competitive for other solar programs if there are grants down the line if we show we did the legwork.”

Leigh Pomeroy, of Mankato, has been a longtime proponent of renewable energy and is a member of the Southcentral Minnesota Clean Energy Council. He said federal tax credits are scheduled to sunset unless Congress reauthorizes them.

“They’re slowly phasing out the tax credits. Congress has extended them in the past in a bipartisan manner. I think the prices on solar are dropping so much it may not make much difference (if the credits expire).

“If they took the subsidies off fossil fuels, it would really help. Our taxes are going to screwing up the atmosphere,” Pomeroy said.

Based in St. Paul, All Energy Solar has done numerous commercial and residential installations in the Mankato region.

Allen said most commercial and residential installations are roof mounts, but that if people have room on the ground, they may install the panels there.

“A majority of people put it on their roof. It’s an existing space. The roof sits there and gets pounded by the sun every day and people realize they have valuable, money-making space just above their head that’s doing nothing.”

Allen said that so far the coronavirus pandemic hasn’t deeply impacted their business.

“I’m happy to say we’ve had very, very few cancellations. I think it shows the value of what solar does for the consumer. It’s sometimes viewed as a luxury good, but it’s really an essential good. Everyone needs electricity and today when everyone is concentrating on saving every penny, what’s better than keeping an eye on the cost of your electricity?”

His company is doing no-contact work, where employees don’t enter someones home or business. He said they use satellite imaging to view properties and can do much of the work they need to without entering a customer’s home. “At some point we will need to come inside, but we can do that down the road.”

While they’ve enjoyed years of growth, Allen knows things will slow down this year due to the pandemic. But he said the growth of solar will continue.

He said he urges people who’ve considered solar to look into it soon to take advantage of the federal tax credits, which are declining each year.

Allen said there are ways that people can lock in this year’s 26% tax credit even if they don’t actually build the solar system until next year or beyond.

“Utilities in the state offer net metering. It doesn’t sound sexy but it’s a really strong incentive. It says that if you don’t use some of the electricity from your system, the utility will buy it back from you at the same or similar rate you pay for electricity. That’s the biggest incentive in the state.”

He said the cost of installing a solar system has fallen from 30% to 50% in recent years, due to the drop in equipment costs including the panels, inverters and racking equipment.

Allen said most people take a 10-year loan to pay for their solar projects. “A solar system is warrantied for 25 years and will last longer than that.”

Rekstein spent $65,000 for the 38-panel solar system on his insurance building, installed in 2016. “My payback period is eight years. After that it’s all free money.”

“In April, May and June, I actually get a check back from Xcel because there is sun shining and I’m not using much air conditioning. Then July and August there’s usually a zero bill. Then my bill goes up in the winter when there’s not as much sun.”

Rekstein said there were some pitches on his roof that prevented him from having all the panels installed there, so some were placed on the awnings of the building.

“They are steel awnings, so they were strong enough to hold them.”

“My system is connected through a computer system to Zinniel’s office, so they they monitor the panels and make sure everything is working. I don’t have to do anything.”

Rekstein said that if he had extra space, he probably would have put the solar panels on the ground. “The ones on the ground you can get them to rotate with the sun, so they’re even more efficient.”

One drawback to roof mounts is that if a roof needs to be shingled or other roof work done the panels have to be removed and then put back up.

But Allen and Rekstein said that many commercial buildings have steel roofs.

“If you have a metal roof, it should last 50 years and barring any storms you shouldn’t have to deal with your roof again,” Rekstein said.

Hanif is new to the Region Nine Development Commission and to the state, having come from Georgia.

He heard about the SolSmart program when someone from the Great Plains Institute spoke at a Southcentral Minnesota Clean Energy meeting he attended.

Hanif said he thinks there are ample opportunities for solar growth, but he notes some opposition has grown against larger solar gardens in some areas.

Some area counties have put temporary moratoriums on new solar gardens, which are usually built on less productive land owned by farmers.

There are about 7,500 solar arrays in Minnesota with 1,000 of those installed in about the last year.

The Legislature in 2013 mandated that big utilities generate 1.5% of their power from the sun by 2020. The state already has exceeded that goal with more than 2% of its power now coming from solar.

More community solar gardens have been built around the state, allowing people to buy a subscription to get their power from the solar gardens.

Pomeroy said solar gardens are a good alternative for many people who want to get renewable energy.

“For people who don’t have the money or maybe the right property to install solar, the community solar gardens are a good option. But you have to be sure you are signing up with a good one. There have been some fly-by-night operations.”

While Pomeroy said there have been some bad players in the solar industry, it’s becoming less of a problem.

“The shysters are falling out and we’ve learned a lot more about solar.”