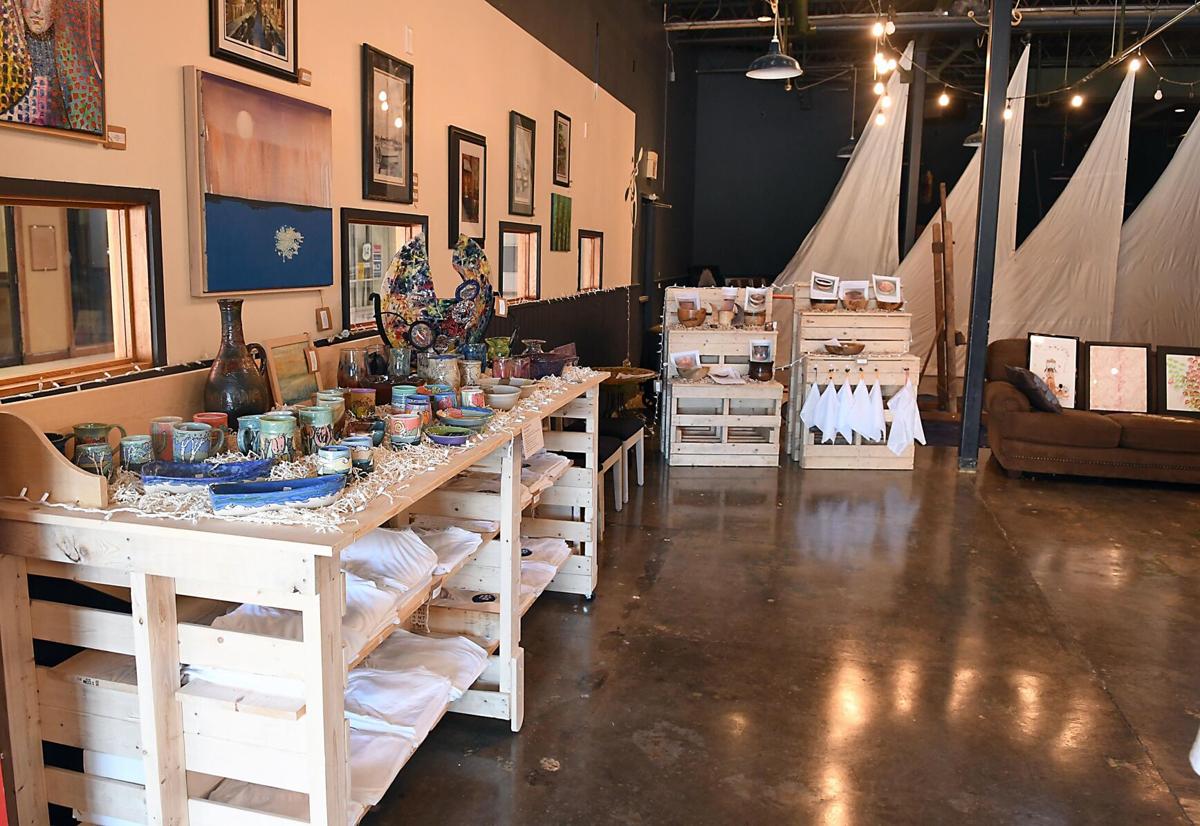 Much of the work in the Blue Boat comes from local artists. 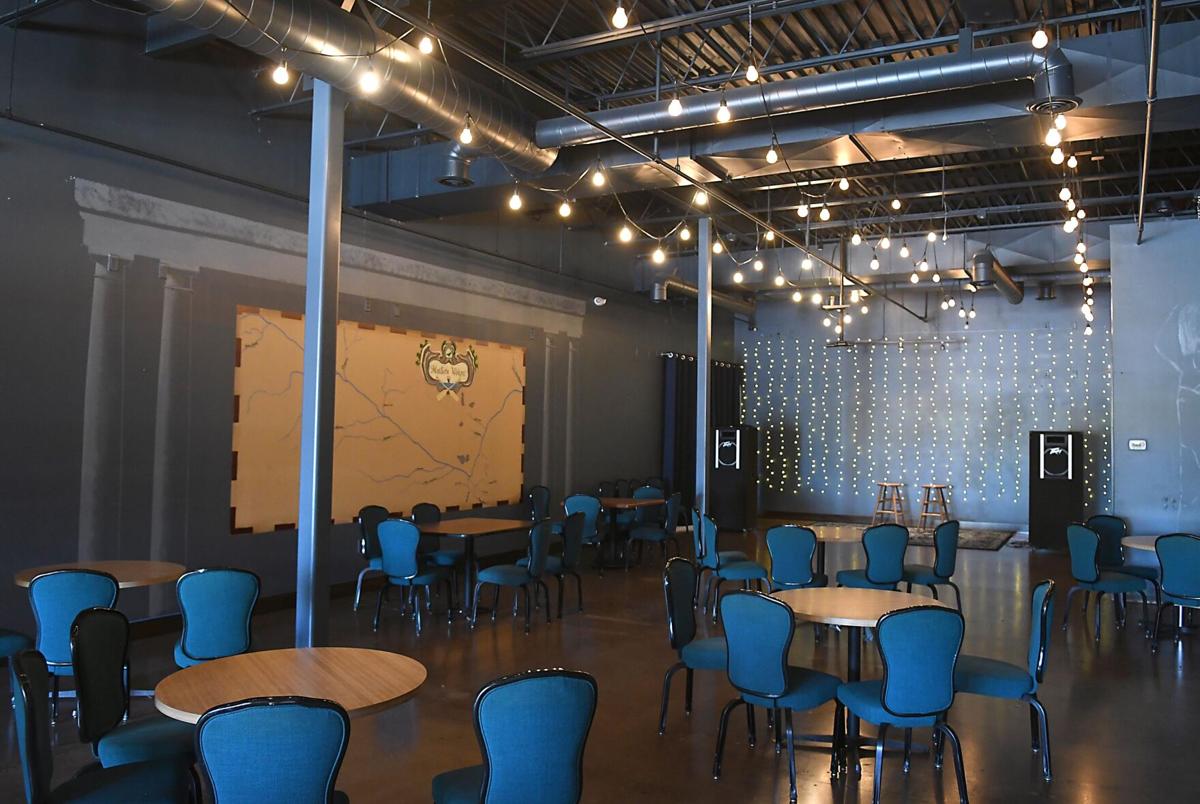 Fahrforth hopes to one day offer a full breakfast-through-dinner menu, as well as applying for an on-sale liquor license for the space connected to the gallery.

Julie Johnson Fahrforth opened the Blue Boat retail gallery in downtown Mankato recently and has plans for a renovation and expansion.

Much of the work in the Blue Boat comes from local artists.

Fahrforth hopes to one day offer a full breakfast-through-dinner menu, as well as applying for an on-sale liquor license for the space connected to the gallery.

MANKATO — When Julie Johnson Fahrforth opened up the Blue Boat, an “eco-retail gallery” in Mankato Place on Civic Center Plaza, she had two goals: to showcase local artists and to raise awareness for the many issues surrounding water conservation in Minnesota.

“I knew I was passionate about water and art and the arts,” she said. “I really wanted to put it together and offer the finer things in life: eating well, taking care of yourself and the planet, enjoying the arts, enjoying music. Not only are we an eco-retail gallery-café-music-bar, we’re very strong on water issues. Part of that, all those passions, are wrapped up into The Blue Boat, which is a metaphor for the Earth.”

Fahrforth opened her shop in October, though she had to shut down like most other businesses during this spring’s stay-at-home order. Now, she’s open once more, albeit by appointment only, and is hoping to continue educating customers while also offering access to high-quality, locally produced items.

One of Fahforth’s biggest goals is simply creating a space where local artists have the chance to show off their work.

“There really isn’t a place in town where it’s gallery retail, except for the Carnegie, and they do a great job,” she said. “I wanted something a little more accessible for the people who might not wander into the Carnegie, something to showcase all the artists and a place for them to sell their paintings and ceramic pieces and glassware. I’ve had people stop in from Minneapolis who have purchased artists’ pieces. I’d like to get some traffic from visitors and tourists going through.”

She’s trying to stick with water-themed art to go with her overall theme, but she said she’s opening up a little for portraiture as well. And she has had no difficulty finding local artists. In fact, many of them have come to her straight off the street.

“A lot of them, like (some) musicians, will stumble upon this place and go, ‘What’s this?’” she said. “Some have just walked in off the street. They really dig it, and I dig it, too.”

Fahrforth is now featuring about a dozen local artists, and the products range from hand-carved sumac walking sticks that double as giant flutes to a book by local author Cathy Brennan. There are also hemp chew toys, hand-crafted mugs and bamboo-fiber shirts. Artwork runs the gamut from intricate sketches to colorful pottery. (Fahrforth, who has an art degree from MSU, also has her own oil painting hanging up in her gallery, too.)

Almost everything featured in The Blue Boat is local, though some artists hail from farther away in the state. But they all share a commitment to sustainable and eco-friendly artwork that’s “good for you and the planet,” as Fahrforth explains it.

Megan Schnitker, owner of Lakota Made, is one local artisan whose homemade products are featured in The Blue Boat. Schnitker utilizes knowledge passed down from her tribe — the Rosebud Sioux Tribe of South Dakota — and its traditions to create plant-based medicinal and self-care products, from soaps to deodorants to salves.

Schnitker met Fahrforth through the Small Business Development Center and worked with her to host an indigenous market at The Blue Boat in March. She has sold her products there ever since it opened, and she said she’s had pretty steady sales so far.

“I have absolutely loved working with (Julie),” Schnitker said. “The Blue Boat has been a great place for people to go and find eco-friendly products locally. It’s definitely helped me as a business owner to have a physical place where people can find my products while shopping downtown.”

Randy Dinsmore is another local artist who sells merchandise — in his case, handcrafted wooden bowls — at The Blue Boat. Dinsmore said Fahrforth approached him after seeing some of his products on Facebook and asked if he’d like to sell pieces at her shop. He started showcasing his work there around Christmas 2019, and he said she’s sold several pieces already.

“It has been great working with Julie,” he said. “I love the selection of work she has in the Blue Boat.”

Preserving Minnesota’s water resources has been a passion for Fahrforth since she attended college. She said she took some astronomy classes, including one titled “Life in the Universe,” and was awakened to just how vital water is to all life.

“We all know how special our planet is, but that’s when I fell in love with water,” she said. “That’s when I opened my eyes and started to listen to the experts on the state of our water.”

Fahrforth, who grew up in New Ulm, moved to Colorado for some time after college but came back to Minnesota to settle down, living on Lake Washington with her husband for nine years. Living on the lake only further showed her how important it is to take care of water resources.

“I watched (Lake Washington) turn green and brown during the summer, and I could feel it — I felt not well myself, just watching it,” she said. “We need to make sure that the Earth is protected. Water is really important (for) swimming, recreation, fishing, drinking … There’s something that we can all do, (and) we all need to figure out what that is.”

It was during her time working with these organizations that she felt inspired to take things a step further and open her own business.

“Working on the committee made me realize how much we needed a brick-and-mortar space for people to walk into, a space where one could get the word out on how to solve our water quality issues, and a space to engage people,” she said. “The Blue Boat vision has been with me for many years, and all of a sudden, there was a space available. There’s all this information out there about water, (but) I felt very strongly that people should come in and learn about it and actually have that experience.”

Fahrforth already has hosted a Minnesota River Congress meeting in The Blue Boat and hopes to co-host a “big water event” with MRC in the future, as well as more water-themed events. She’s also collaborating with MSU’s Water Resource Center to bring in an interactive water kiosk for kids to use.

“There’s something that we can all do — farmers, city dwellers, (everyone),” she said. “We can all do our part.”

Looking to the future

Moving forward, Fahrforth has quite a few big plans, but they depend on how everything settles in the wake of COVID-19. She was picking up a good amount of business before the stay-at-home order, and she briefly reopened June 1, but she decided for the safety of herself and her customers to make her shop open by appointment only. People can call her or visit her Facebook page, The Blue Boat, for updates and information.

“The Blue Boat is moving into Phase II,” Fahrforth said. “The first phase was created fast, more a pop-up feel, and we will now be renovating to suit the downtown entertainment district more. However, it will be created by artists and musicians, and The Blue Boat will have a unique vibe.”

Fahrforth said that she is always looking for new artists to feature, especially different ethnic groups. The latest artist to display her work in the gallery is Somali artist Wardah Sabrie.

“(Wardah) really adds a nice flavor to the other pieces,” Fahrforth said. “I want to make sure everyone, all ethnic groups, are comfortable in displaying their art in the Blue Boat. That’s really what the Blue Boat is, a metaphor for the Earth, and it’s all of us.”

She also has dreams of one day offering a full breakfast-through-dinner menu, as well as applying for an on-sale liquor license. Her goal is to work with local farmers to use organic and sustainably grown food, as well as collaborating with ethnic groups in the area to offer a diverse menu. She would also like to feature live music Fridays and Saturdays.

Right now, The Blue Boat’s back room space is available for private parties and events. Customers can utilize their own catering services and make use of seating that’s available both indoors and on Fahrforth’s patio.

More than anything, though, Fahrforth said she hopes that she can continue to educate people on how important it is to take care of some of Minnesota’s most precious natural resources.

“I am just a small piece of the connector set of people solving water quality issues. I am here mostly to support the people who do this every day.”