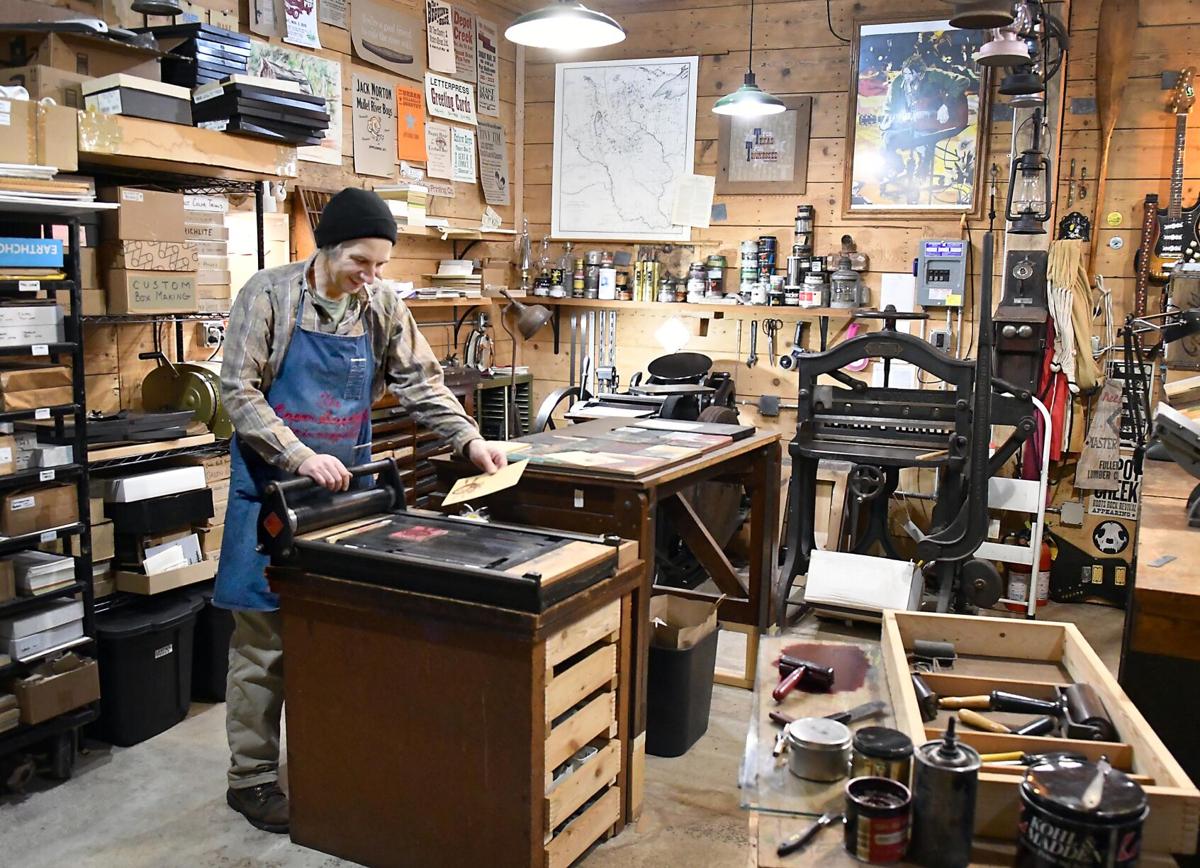 Craig Kotasek, owner of Tin Can Valley Printing Company, looks at a card he printed in his shop near his Le Sueur home. The shop used to be a soybean granary on his family’s farm. 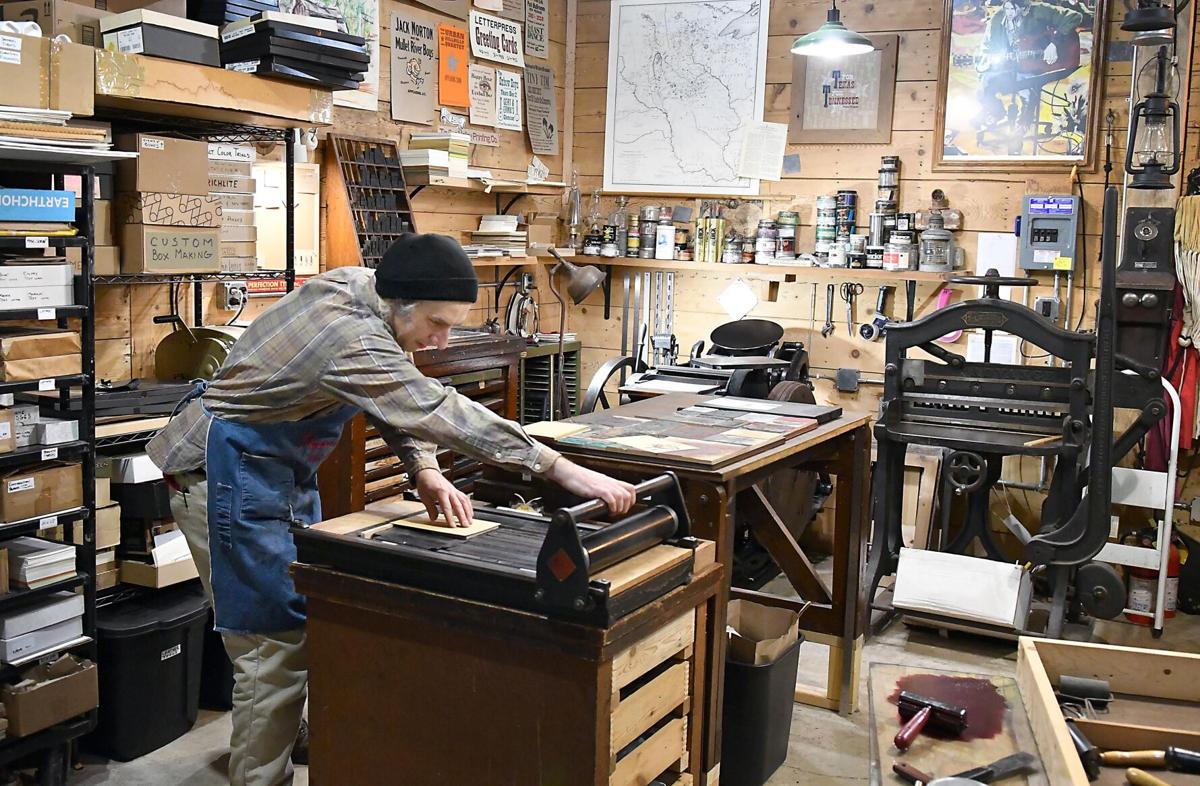 Craig Kotasek, owner of Tin Can Valley Printing Company, prints a card in his shop near his Le Sueur home. 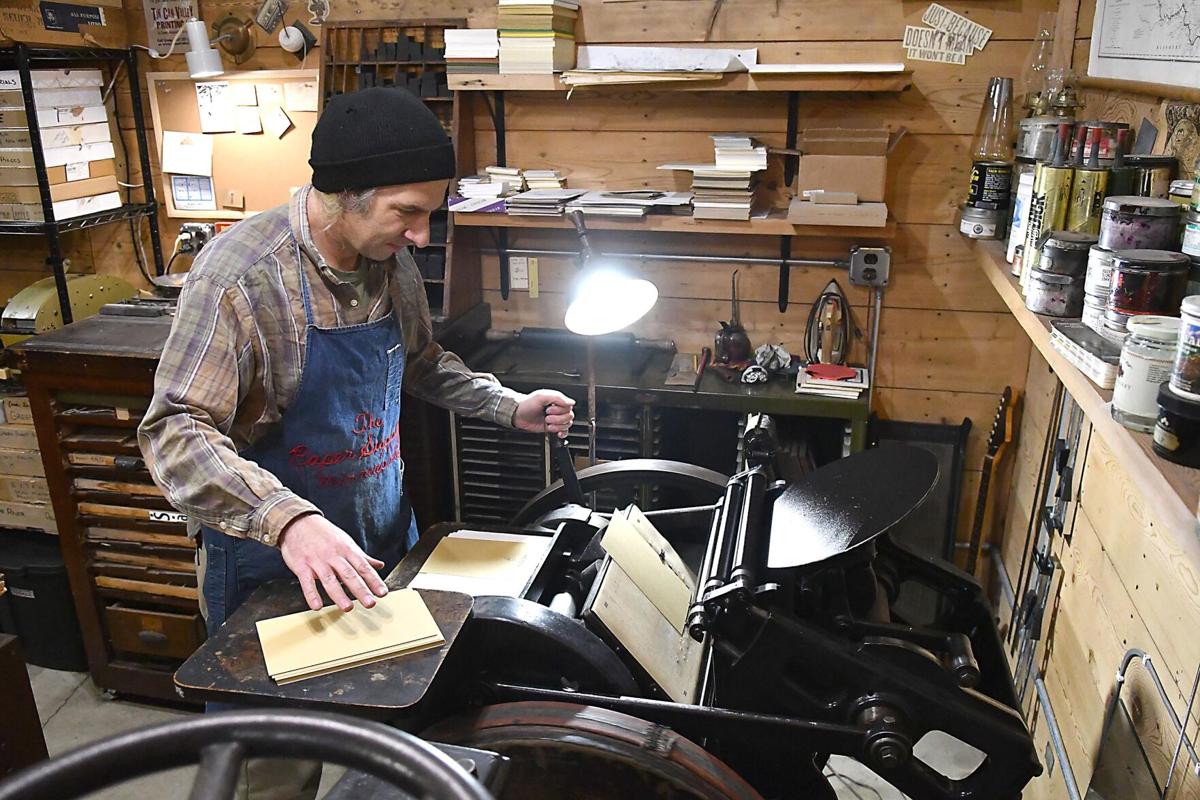 Craig Kotasek, owner of Tin Can Valley Printing Company, prints cards on his 1923 press in a shop near his Le Sueur home. The press is the newest one he owns. 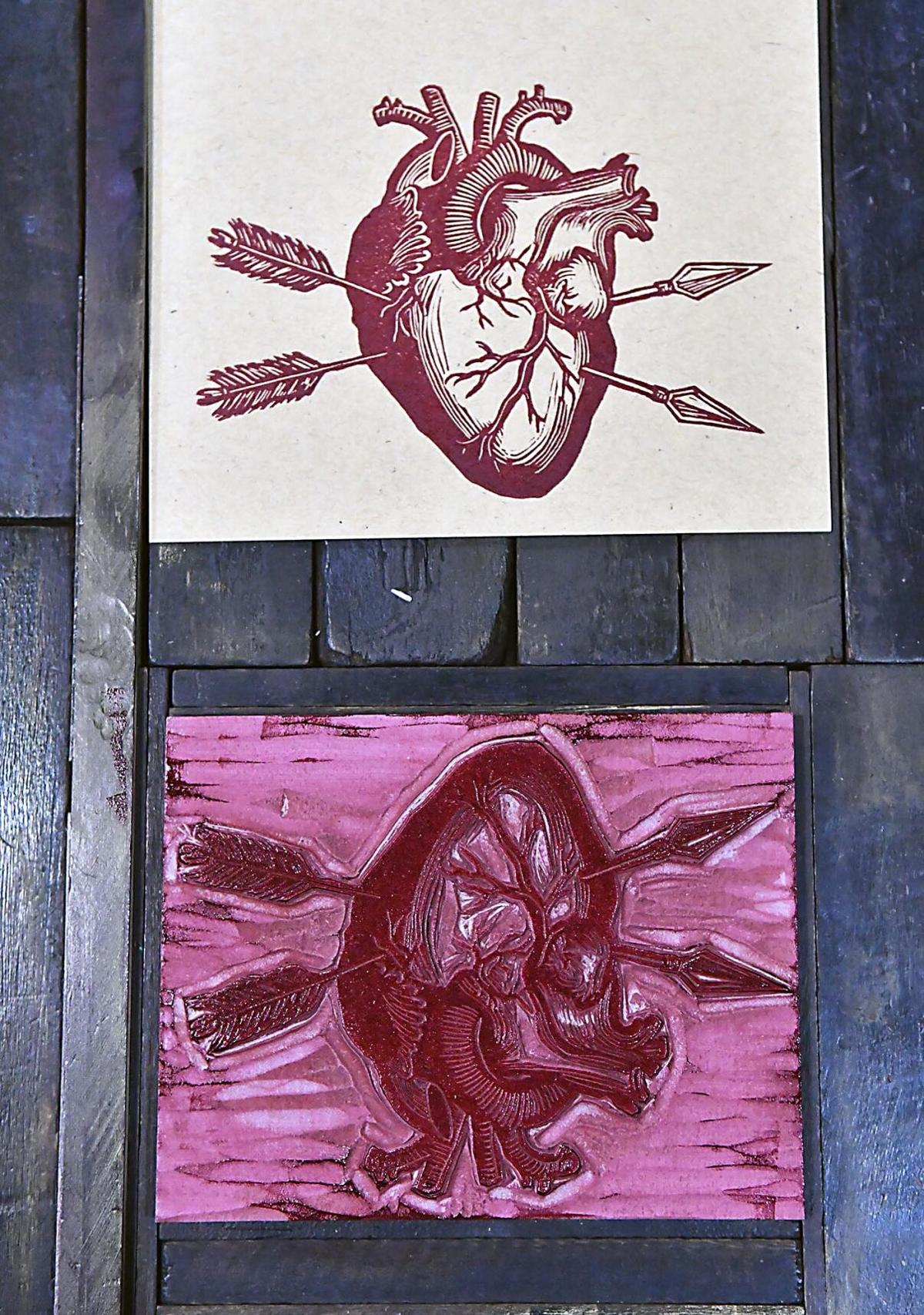 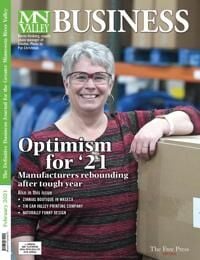 This article first appeared in the February edition of Minnesota Valley Business magazine. To order your free subscription contact readerservice@mankatofreepress.com or call 625-3764.

Craig Kotasek, owner of Tin Can Valley Printing Company, looks at a card he printed in his shop near his Le Sueur home. The shop used to be a soybean granary on his family’s farm.

This article first appeared in the February edition of Minnesota Valley Business magazine. To order your free subscription contact readerservice@mankatofreepress.com or call 625-3764.

LE SUEUR — When artist Craig Kotasek saw an antique printing press firsthand at an exhibit in Minneapolis two decades ago, he noticed a resemblance to the agriculture equipment he’d grown up around as a kid living on a farm near Le Sueur.

“I walked in there and thought, ‘I know how that works,’” Kotasek said.

A visual artist since childhood, he’d been approached by people asking him for prints of his drawings.

“By serendipity, a couple weeks later there was an ad in The Free Press that the Gaylord Hub was looking for a printer,” he said.

He brought his artwork to the Gaylord Hub office, explaining he wanted to learn how to print his own drawings. That intrigued the outgoing printer, who later trained him on how to use the equipment.

Kotasek would spend the next 15 years working as the newspaper’s printer, doubling as a reporter and photographer when needed. In exchange, they let him use their equipment after hours to create his own prints.

“I got into carving and would transfer the images to a printing block.”

He made his first posters by pressing carved images of a guitar, banjo and type onto ink and paper to promote gigs for his own band, the Oxbow Boys.

“I was determined to make a new poster for every show we did,” Kotasek said. “I probably did 200 different versions of that for gigs over the years.”

When word got around, other bands and musicians started asking him to print posters for their own shows around southern Minnesota. He later named his business Tin Can Valley Printing Company, a nod to the Minnesota Valley Canning Company, founded in Le Sueur in 1903 and later renamed Green Giant.

Kotasek spent the next year researching and reading everything he could find on the art of printmaking, eventually driving down to Missouri to pick up an antique printing press that had been sitting idle on a farm.

It was more than 100 years old and would be the first of many that Kotasek would acquire over the years.

“All these small newspapers began to close down, and the little print shops were disappearing,” he said. “My name got passed around as this guy who would come with his trailer and save all this equipment from the junkyard.”

He and his family later moved to the family farm from his childhood on a bluff overlooking the Minnesota River Valley just west of Le Sueur. That allowed him to spread out and accumulate more equipment — renovating an old granary for his home studio.

“Until 2010, my father was still storing soybeans in here,” he said.

He’s acquired cabinets full of wooden and brass blocks from the Hanska Herald and the Arlington Enterprise, and a press and cutter from the Silver Lake Leader in McLeod County. It’s the newest printer that he has, a motorized machine built in 1923.

“The oldest one is probably from the late 1800s,” Kotasek said. “Most of the newspapers would use these as their little jobbers, printing business forms for local businesses.”

They come in various conditions. Kotasek points to a refurbished mini press in his studio.

“This one came from the Henderson Independent, and before that, it was at a funeral home in Le Sueur where it printed obituary memorial cards for the funerals,” he said. “They would put in the little type and print the memorials on this little press. I was excited to have that set up for fairs and let people come and make little prints with it.”

hand-operated press functions like a slot machine: Users feed the paper into it and pull a lever to transfer the ink from a block carving onto the paper. The size and simplicity of that machine make it a hit at art fairs and music festivals, where curious people could try it out themselves.

“Some fairs I’d show up and not sell a single thing, and for others I’d sell all sorts of stuff,” he said. “I got into commissions that way too. Of course, this year there are no art fairs, so I decided it’s probably time to start selling stuff online.”

Kotasek describes traditional printing methods as a layered process, especially when using multiple colors or intricately detailed carved images. They range from old farm equipment and landscapes to food, animals and a pair of his dad’s old work boots, carved from a drawing he had made years before.

“There’s a lot of planning for each layer, each color and how all the composition is going to go together,” he said. “Being an artist, I like the impulsive and abstract stuff. But I also like the engineering that’s involved and having to think about how everything is going to stack up.”

“It’s a rewarding thing because cards are always gifts,” he said. “They’re generally positive. I like the idea when people buy a card and send it out rather than just sitting in a drawer. I found that if people buy 20 of my cards, they are more likely to send them out, so I try to discount them if they buy a bunch.”

His cards are for sale at the St. Peter Food Co-op and the gift shop at the Arts Center of Saint Peter.

“I received a card he had made from a friend and loved it,” said Stephanie Thull, general merchandise buyer for the Co-op, who also works at the Art Center’s gift shop.

“It was just a really good fit being that he’s local and has these cool vintage-style designs,” Thull said.

Kotasek’s cards and posters are also available through the Twig Case Company, a Waseca-based artisan iPhone case manufacturer. He hopes to expand his prints to other stores.

Over the years, Kotasek said he’s witnessed a growing interest in traditional printmaking among the younger generation.

“When I started this, I was the only young guy out there; it was all these old-timers,” Kotasek said. “Over the last 20 years I’ve noticed more young people. A lot of students go to art school and they get to try it — it’s very addicting — the art and being able to be hands on. It’s so tactile.”

Even after printing thousands of cards, posters and images, Kotasek still gets a rush when the ink meets the paper.

“You go through all this work and preparation, getting everything lined up and measured so the thickness, the ink density and ink colors are just right,” he said. “When you lift that sheet up for the first time and see the print, that euphoria is still there. I still get that rush every time, even if it’s just a business card.”