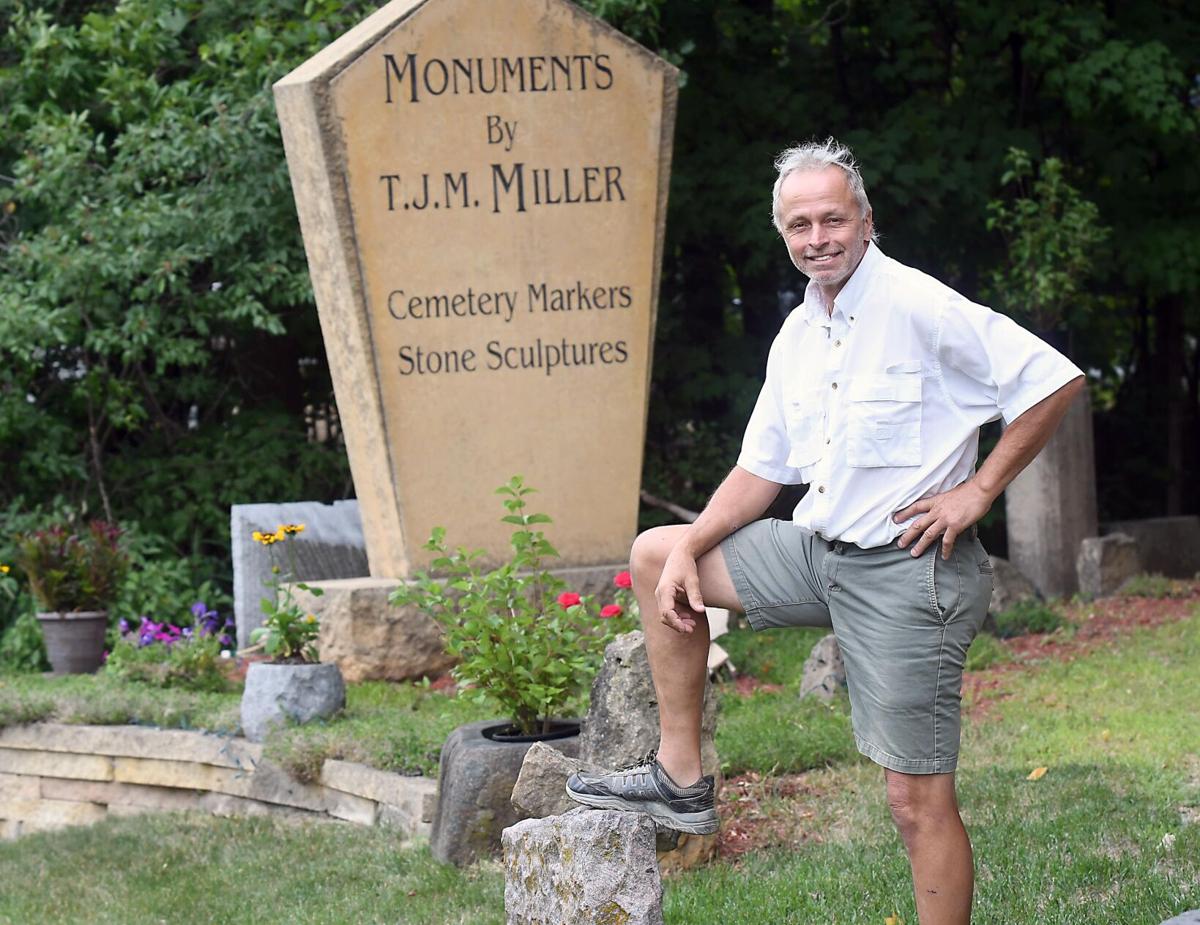 Tom Miller has carved cemetery markers across the region but is best known for his Indigenous works, including the bison at Reconciliation Park. 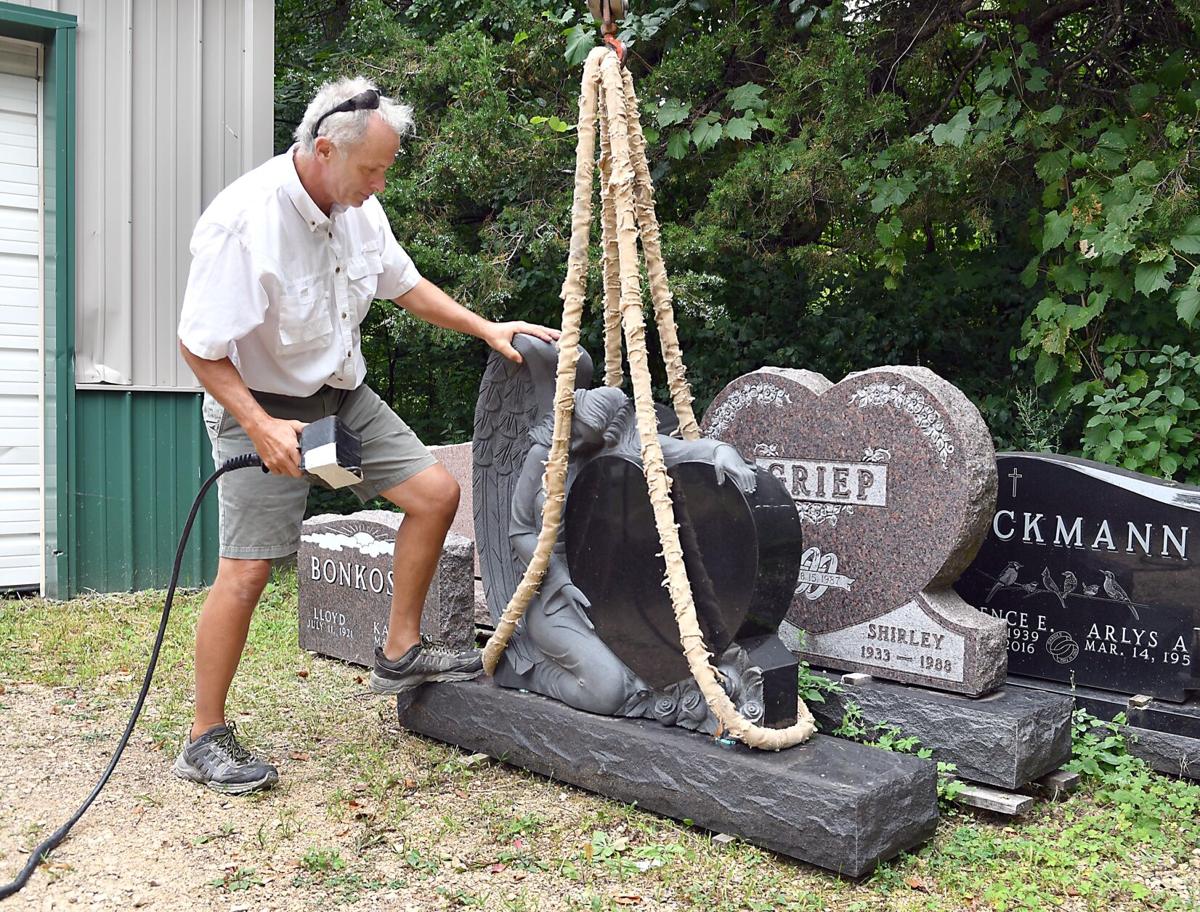 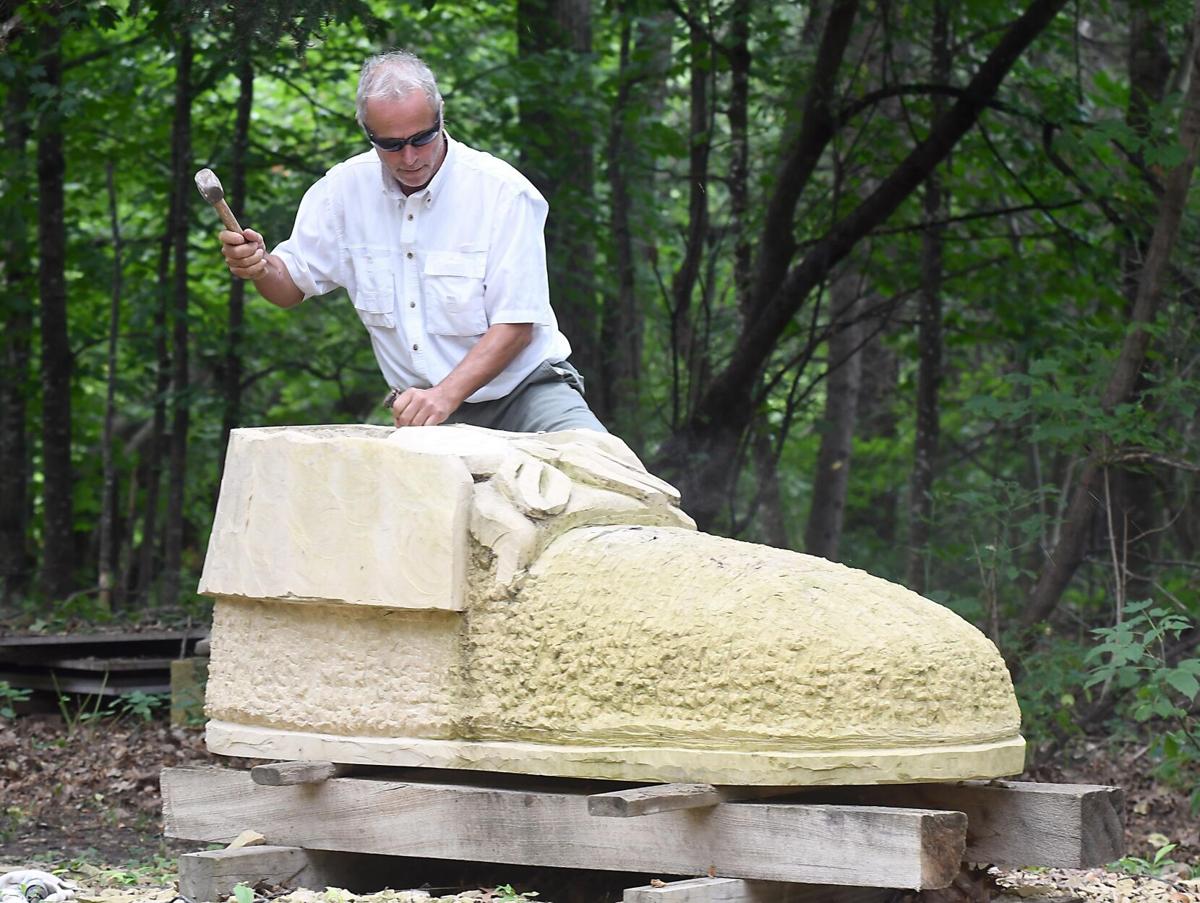 Tom Miller is working on a pair of moccasins that will be placed in Reconciliation Park in Mankato. 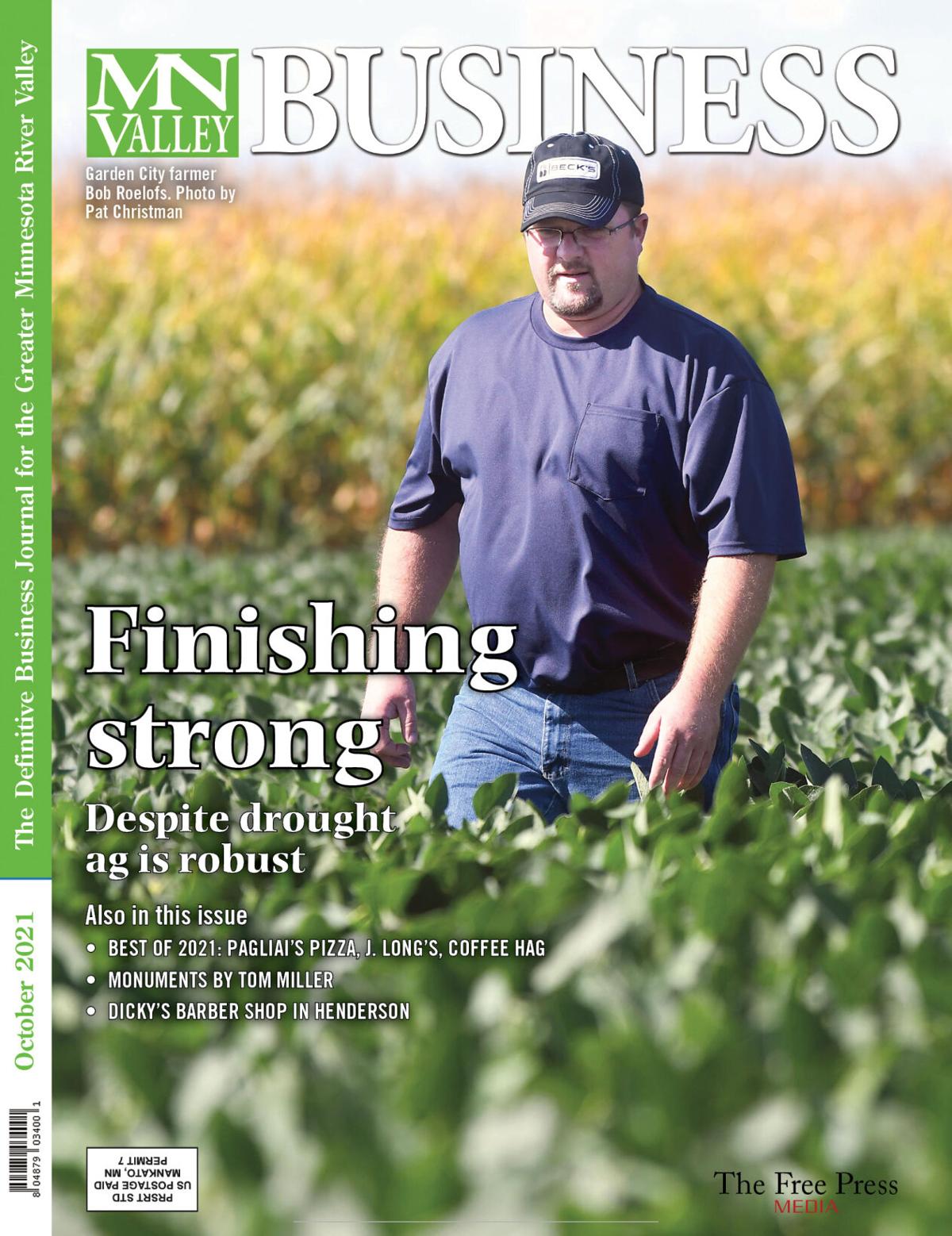 Tom Miller has carved cemetery markers across the region but is best known for his Indigenous works, including the bison at Reconciliation Park.

Tom Miller is working on a pair of moccasins that will be placed in Reconciliation Park in Mankato.

MANKATO — It’s not difficult to find Tom Miller’s stone carvings around Mankato, from headstones at local cemeteries, to stone benches at city parks or statues downtown.

But before Miller moved back to Mankato in 1986, he had already garnered national recognition for his stone statue, located at the University of Colorado’s Boulder campus, depicting Alferd Packer, a wilderness guide who resorted to cannibalism on a winter trek through Colorado’s San Juan Mountains in the 1870s.

“It got national recognition because it was unveiled by Governor Richard Lamm at the time,” Miller said. “All the local news channels and newspapers — NBC, CBS and the New York Times — covered it. That was a big steppingstone for me in getting this going in Boulder and it was even in the paper in Mankato.”

Both of Miller’s grandfathers were wood carvers, and Miller followed suit in his high school shop class. On a visit to the Mankato East High School Library, he remembers flipping through books on the history of sculpture and architecture in Europe.

“I was dazzled by the stone carving they did thousands of years ago,” Miller said. “It got into my mind that I would love to try it, and I thought I could do it even at that age.”

After graduating from high school, Miller bought a home on contract for deed in 1978, fixed it up and resold it. He used the money to move to California to attend school at the Laguna Beach School of Art, later earning a scholarship to study stone carving there.

Burnt out on the high population density and traffic, Miller made the decision to move to Boulder, Colorado in 1982. Along with the Packer statue, Miller made several other sculptures for the city of Boulder and the University of Colorado. In those early days, the pay was minimal — from a few hundred dollars in exchange for a month’s worth of work to free breakfast at the campus restaurant.

A Colorado history buff reached out to him about creating a stone statue of a historical figure and said she would pay him whatever he asked. Miller suggested Isabella Lucy Bird, a woman who traveled solo on horseback in the early 1870s and climbed to the top of Long’s Peak at Rocky Mountain National Park in 1873.

“I was always doing something for myself or for somebody in sculpture, but not back then getting paid well until the Isabella Lucy Bird one,” Miller said. “She said, ‘whatever you want, I’ll take care of you.’”

Throughout this time, Miller made a point of coming back to Mankato for Christmas each year to spend time with his parents. On one visit in 1986, a story in the Mankato Free Press piqued his interest. The article referred to then Minnesota Gov. Rudy Perpich proclaiming 1987 as a year of reconciliation for the 125th anniversary of the largest mass execution in U.S. history when 38 Dakota men were hanged by the U.S. government in Mankato in 1862.

“As a kid, I knew I always wanted to do something for downtown – to honor the Native Americans and reconcile the facts of what happened,” Miller said.

He acquired Kasota stone from a local quarry and decided to spend a year at his grandparent’s farm northeast of Mankato working on a sculpture of a Native American man. The sculpture was made in coordination with the Mahkato Mdewakanton Association — the group that organizes Mankato’s annual powwow — who helped to fundraise alongside the Minnesota and Blue Earth County historical societies.

“I remember sitting in front of a mirror drawing myself half kneeling like he is, and then added the Native American garb,” Miller said. “I spent the year carving it and had school kids coming out in busses. Thousands of people came to watch and see the process and educate on what happened in town.”

They held a dedication ceremony for the completed “Winter Warrior” statue in time for the 125th anniversary on December 26, 1987. While his initial plans were to return to Colorado, completing the statue in Mankato created a domino effect, snowballing into a lot of other work, like carving signs.

After Miller became a father, his father suggested he get into the cemetery monument business, and he named his business Monuments by Miller.

In the late 1990s, Miller began work on a large stone-carving of a bison at Reconciliation Park on Riverfront Drive downtown. Using the largest block quarried in the state, with a weight of 138,000 pounds, Miller used a large hand grinder with a 12-inch blade to carve the sculpture down to 70,000 pounds using a painted, outlined frame as a template.

The work was almost entirely done on site at Reconciliation Park, using hammers and pitching tools at first, before chiseling the details using even smaller hammers and chisels. He compares the smallest tools to fine-tune the sculpture with something a dentist would use.

A long-term project on a major thoroughfare led curious onlookers, including Lona Falenczykowski, to gather and watch the process.

“He’s so incredible and artistic with all the beautiful monuments he’s done,” said Falenczykowski, vice president of the Betsy-Tacy Society.

Falenczykowski recruited Miller to make stone pavers engraved with donor’s names adjacent to Betsy’s house at 332 Center Street in Mankato, and he’s currently working on a three-piece bench memorial in honor of all the people who have supported the non-profit.

“A lot of times I like to visit graveyards and you can almost always tell his work – the beautiful carving,” Falenczykowski said. “He’s a very creative and talented fella. He’s just been amazing to follow through the years.”

Miller was also recruited to work on the Minnesota State Capitol’s recent renovations, and he continues to create stone carvings across the country, in cities like Chicago and Kansas City.

Most of the granite for his stone carvings, especially cemetery memorials, comes from the town of Barre, Vermont — known not just for its stone, but for its talented stone-carving Italian immigrants. On a visit to Barre, a woman at the Vermont Granite Museum suggested he pay a visit to Giuliano Cecchinelli, a stone-carver known for his intricate and finally detailed headstones at a cemetery in town.

When he arrived, a spectacled man wearing a hat approached him. It was Cecchinelli offering to show him some of the carvings he and his ancestors had done around the cemetery.

“He explained all the little details and hidden symbolism in sculpture and in the stone,” Miller recalled. “Later he dropped me off and I said, ‘that was amazing, but why did you do this?’ He said, ‘because I know who you are. That was amazing to me. There’s a band of us. It’s such a treat when I get around these people and we have that common thread.”

Miller is currently working on what will likely be his final phase of commemorating the U.S. government’s execution of the 38 Dakota men in Mankato at Reconciliation Park. When it’s finished, two moccasins at the park will face towards Fort Snelling to commemorate the 1,700 Dakota women and children forced to walk the 150 miles from Mankato to Fort Snelling following the mass execution. Many died on the way.

Miller said Mankato has changed significantly since he first moved back as it becomes a hub for public art.

“It’s so cool to see everything happening from the murals, to the silos, to the beautifully painted flood wall,” he said. “It brings people to your town and then they spend money here. It’s really what makes a community to me.”