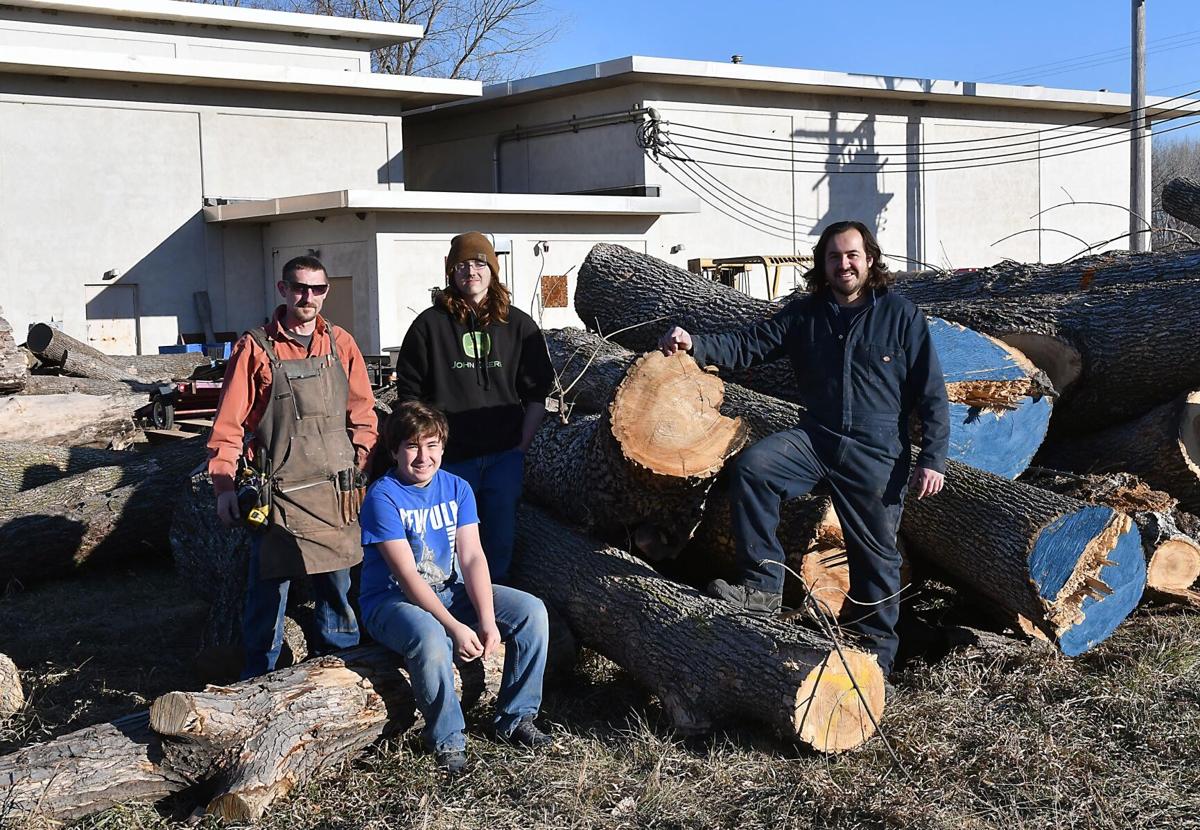 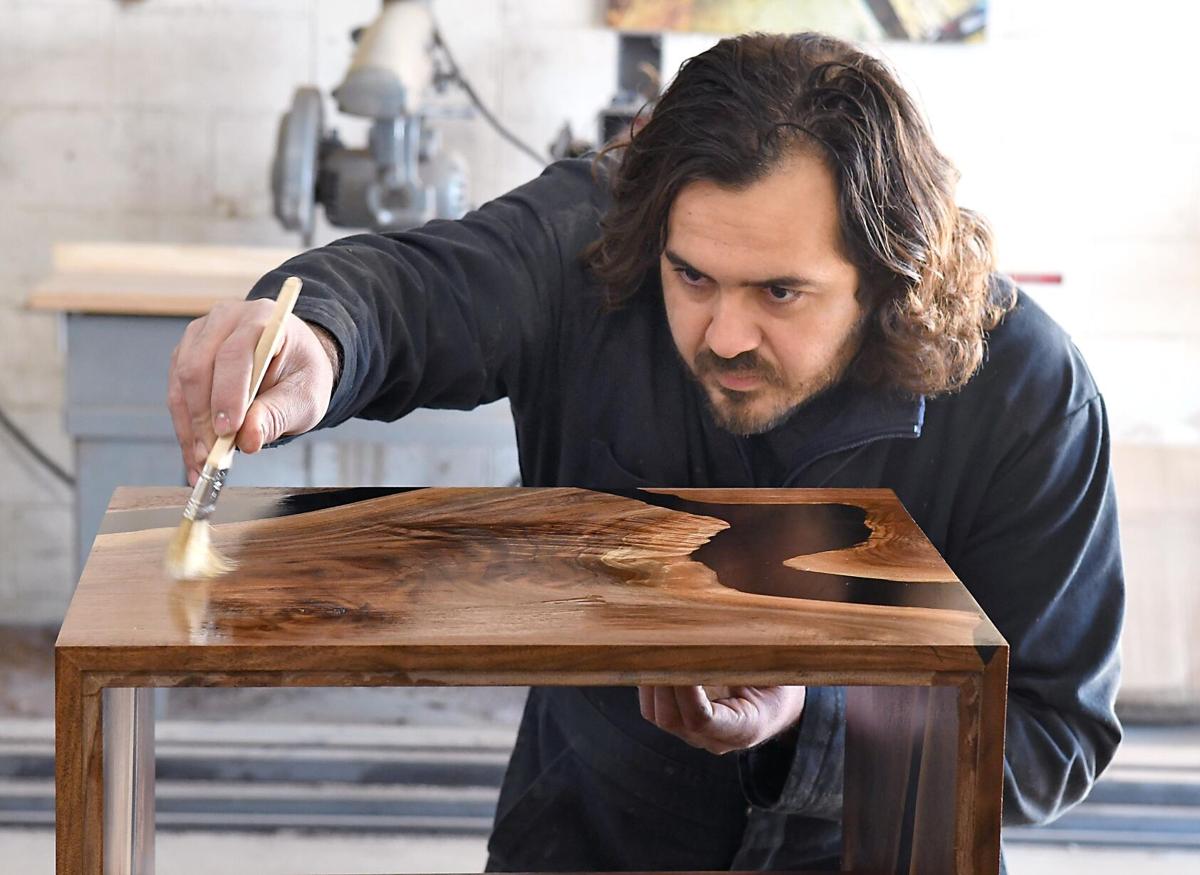 Harold Enamorado puts a finish on a table. 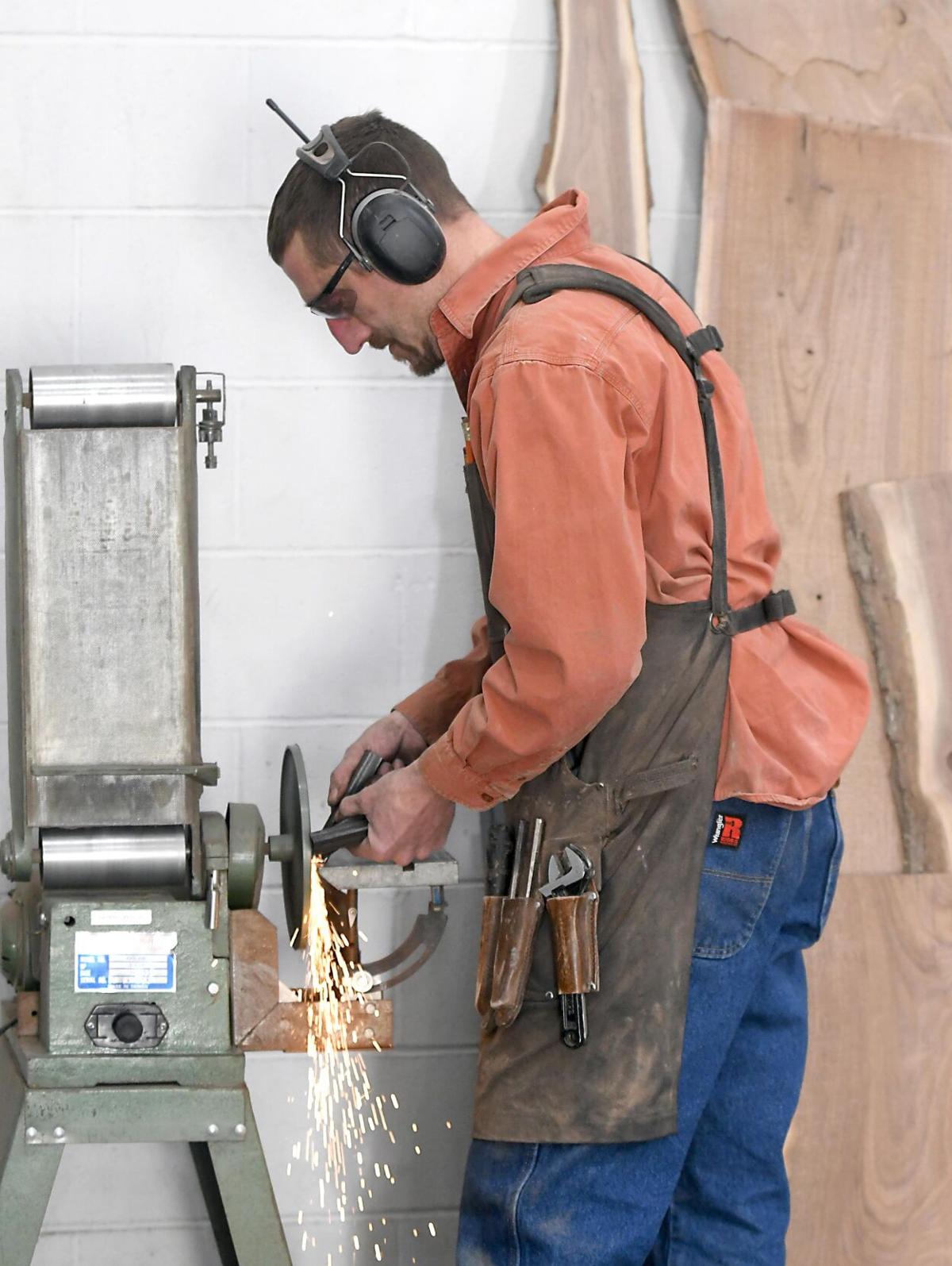 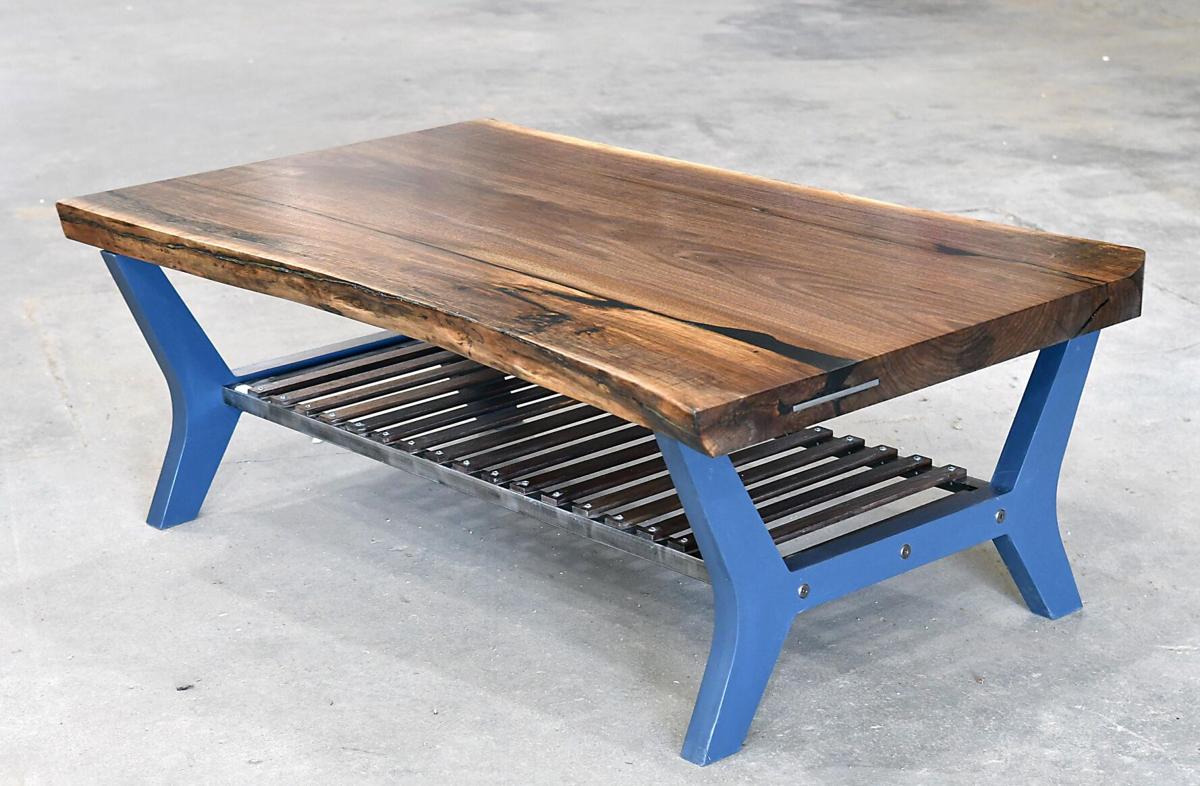 Harold Enamorado puts a finish on a table.

Harold Enamorado – owner of Cala Contemporary Woodwork in New Ulm – may be one of the only people whose custom furniture business is located in an old water treatment plant.

He’s got big ideas as he renovates the sprawling building into a wood furniture shop and showroom, outdoor sawmill and a potential community gathering place in the future.

“We’re planning to have kids come here to build birdhouses and we’re going to donate some wood to the woodworking program at the high school here in New Ulm,” Enamorado said.

“Another plan we’ve got is Dudes and Doughnuts,” he said. “(Seniors) will come to the shop and make a project or finish a project that they have at their homes that they cannot finish because they don’t have the special tools. They can bring their stuff and use the tools here.”

Enamorado is the kind of person who sees opportunity everywhere, and he’s willing to take risks, even big ones. It’s an approach to life his father instilled in him from a young age when he was growing up in Honduras in the late 1990s.

He began working at his father’s metal furniture factory in the city of San Pedro Sula as a welder at the age of 10. When the international commodities boom around the turn of the millennium caused the price of industrial metals to skyrocket, his father had to reinvent his business or close his doors. His father chose the latter – a risk that paid off.

“With the metal, everybody would have probably just closed their business,” Enamorado said. “He said, ‘no, we’re just going to go a different way.’ The wood is his main production now. Every little step that I do here I think, what would my dad think about it? Then I call him, and he’ll say, ‘just go for it.’”

On a weeklong vacation with his parents to neighboring Costa Rica, Enamorado decided right then and there to stay, transferring his college credits to an architecture school there. He met his wife to be, an international student from Minnesota, while the two were both earning their degrees. After graduation, she suggested they move back to Minnesota, first landing in the Twin Cities suburb of Mound, where Enamorado ran a drywalling business.

About four years ago, their son, Alessandro – who was eight years old at the time – found some old wooden railroad ties in the woods near their home. He asked Enamorado to make something with it.

“I put it in my garage and spent days trying to remove the oil that they put in those pieces of wood,” Enamorado said. “I didn’t have any tools other than a handsaw and a hand planer from my garage. It took a month to make a table.”

When Enamorado posted a picture of the table on Facebook, it literally sold within an hour. That was the seed that sprouted Cala Contemporary Woodwork, named after the first flower Enamorado gave to his wife, which he founded the following year.

When the couple gave birth to twin daughters, they relocated to New Ulm to be closer to family. An architecture firm hired Enamorado, and in his spare time, he continued to build furniture out of his garage.

Meanwhile, the City of New Ulm was deliberating on what to do with their old water treatment plant along the Minnesota River. It had been dormant for years, and the cost of upkeep and heating the building was becoming a headache for the City.

“They were planning on demolishing this building because they weren’t using it,” Enamorado said. “We told them we are looking for a building and we’re growing in the area.”

The City sold him the building for $1 in exchange for taking charge of the costly renovation and upkeep. Enamorado’s son remembers the day they walked through the front door when they acquired the building in September.

Like his father before him, Allesandro Enamorado is learning the trade, driving the forklift, helping with the sawmill outside and sanding wood inside.

He said he knows he’s done sanding: “When you don’t get splinters on your hand.”

Today Enamorado spends his mornings as an architect and his afternoons building handcrafted furniture made from reclaimed wood, or from old tree branches otherwise destined to be burned at the city’s tree disposal site. It’s essentially become two businesses, the sawmill outside and the furniture making business inside.

Enamorado’s goal is to ensure that the right piece of furniture fits with the needs of each customer. That begins by asking lots of questions to determine what kind of wood to use, and what texture and color will be most suitable.

“We build what’s best for the client,” Enamorado said. “I don’t want to give them something that at the end of the day might not work for them. That’s why I always ask questions and for pictures of their space.”

Those questions can range from the size, colors and lighting in the room to the customer’s own interests and the furniture’s purpose, which determines what wood to use and the dimensions. When Enamorado saw a customer’s Harley Davidson sign in the background of a picture sent to him, he proposed a piece of furniture with those colors.

“We sold it right away, just because we are always trying to find something extra in the client that is going to tell me what they want. It’s the same with the wood.”

He makes a point of not forcing the wood into something it’s not, instead working with what he’s got. If a piece of wood has cracks, he fills those with resin or epoxy to fill in the gaps. The end result is a creative and intentional looking marble-like surface with brown and black tones that swirl together, a trend that’s become increasingly popular in recent years.

Enamorado’s style is just as much historical preservation as it is creative, like the coffee table he builds out of old barn beams, or a console table made from reclaimed wood. Other creations are made from black walnut to black locust and red cedar.

He currently has two employees but has plans to hire more in the future.

“It’s not a big production, but everything we make is unique, and we use every piece of wood,” he said. “Every little step led to the right decision. I’m not afraid. I just do it.”