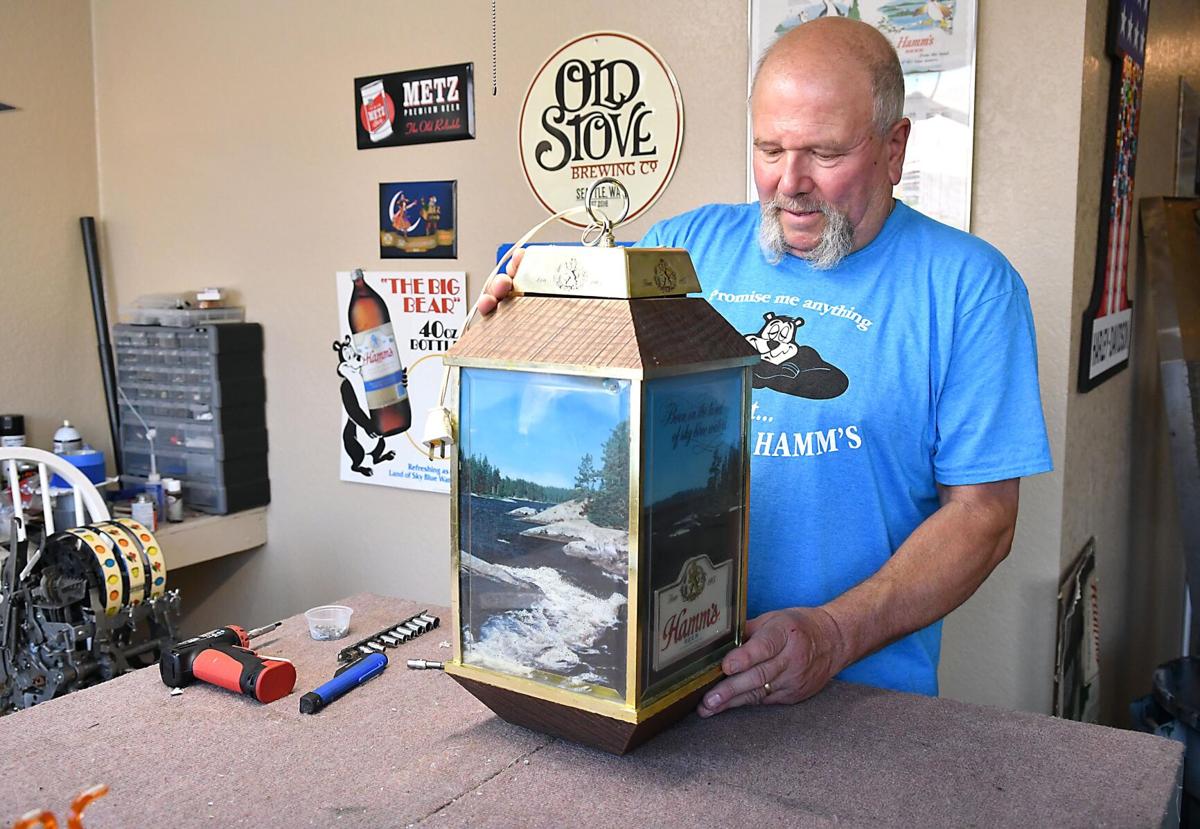 Steve Miner, CEO of Hamm it Up, can repair virtually any old beer sign. 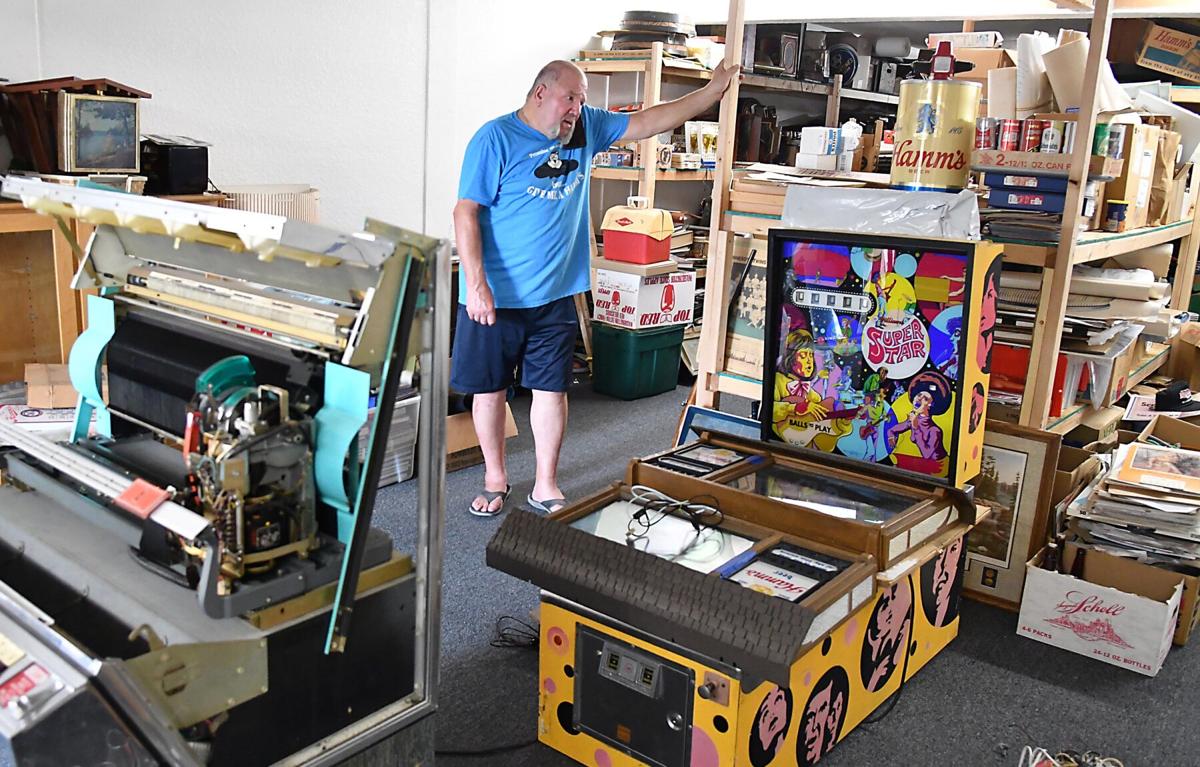 While he specializes in refurbishing old beer signs, Steve Miner also fixes up old pinball machines at his Winnebago shop. 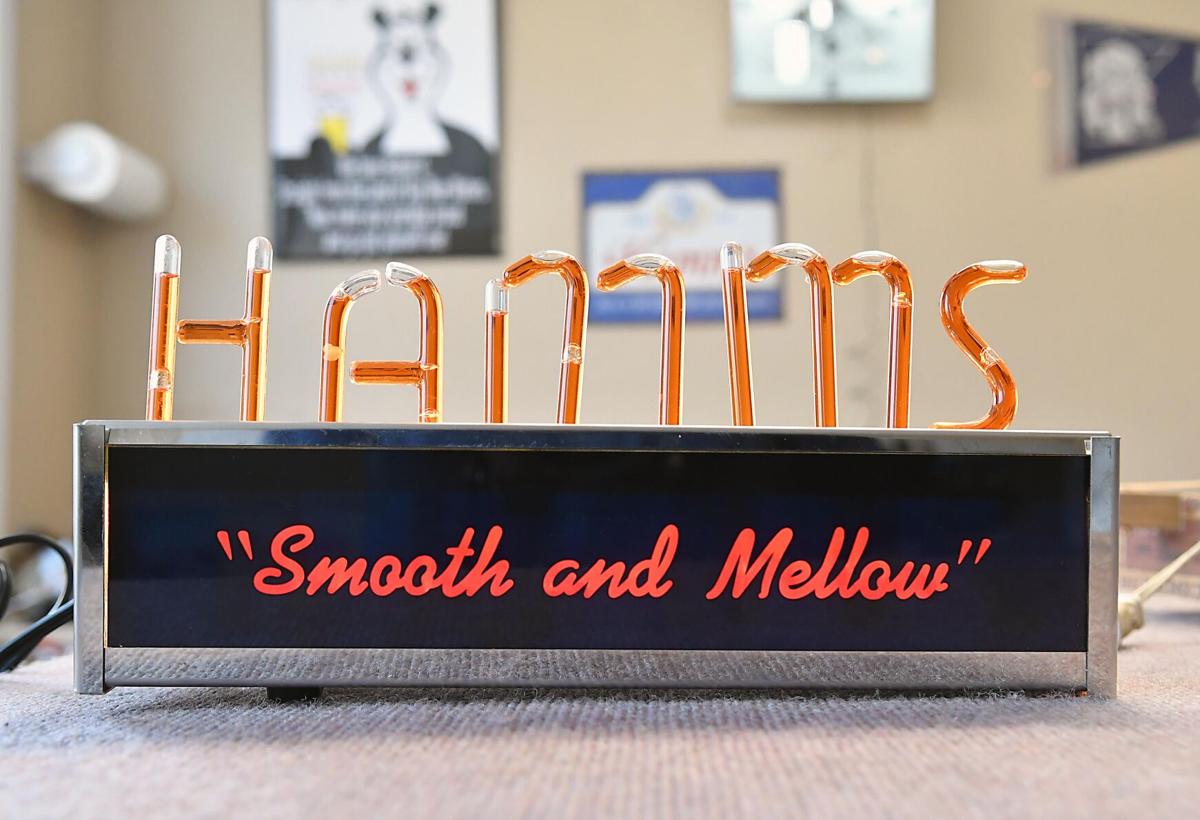 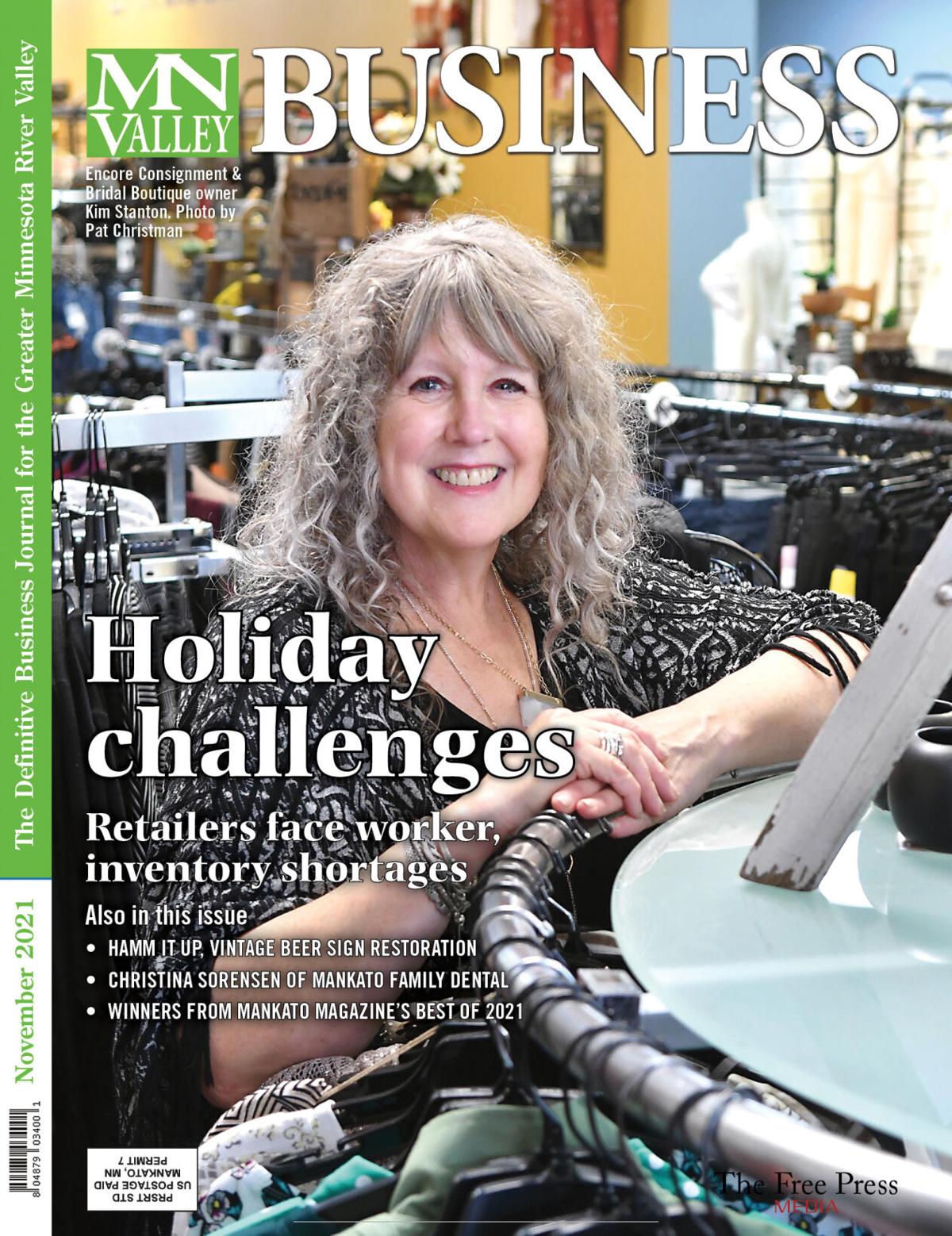 Steve Miner, CEO of Hamm it Up, can repair virtually any old beer sign.

While he specializes in refurbishing old beer signs, Steve Miner also fixes up old pinball machines at his Winnebago shop.

WINNEBAGO — While visiting his grandparents in St. Paul as a kid, Steve Miner remembers nursing an orange pop with his grandfather at a local watering hole near the state fairgrounds and being mesmerized with a Hamm’s Beer sign depicting a camping scene on the wall.

“They said, ‘if you watch long enough, the bear sticks it’s head out of that tent,’” Miner recalled.

The bear never did stick its head out, but the sign left a lasting impression on him that would lead to a lifetime of collecting and renovating old beer memorabilia.

“I was fascinated,” said Miner, who is now CEO of Hamm it Up, a Winnebago-based business devoted to renovating and repairing vintage beer signs.

When he was a young adult in the 1970s, Miner took note of the elaborate artwork on the cans of Schmidt Beer he was enjoying with his coworkers after a long workday. One can had an animal, another had a muskie. Soon he discovered that each can of Schmidt beer featured one of 21 full color images created by the company.

Miner began asking friends, colleagues and acquaintances for their used beer cans to start a collection, and before long, he had acquired literally thousands of different beer cans. He discovered he wasn’t alone in this particular hobby; he soon joined a couple clubs made up of people who collected and traded them.

“I got to the point where I had probably 4,000 different cans, which got a little out of hand, and I ran out of room,” Miner said. “So I kept narrowing the collection down, and I ended up just collecting Minnesota brewed cans, like Hamm’s, Grain Belt, Schell’s and Fitger’s.”

But with the focus on Minnesota cans only, Miner began to get bored as he had collected nearly everything he could. That’s when he thought back to the Hamm’s Beer sign that had such an impact on him when he was kid visiting his grandparents in St. Paul.

When he couldn’t add more cans to his collection, he decided to sell his cans to a couple of guys in St. Louis, and he began exclusively collecting Hamm’s beer memorabilia and repairing vintage signs. With a career in the automotive industry, Miner was skilled at understanding how motors work, and some of the elaborate Hamm’s signs he came across were powered by motors and electricity, with signs that illuminated, flashed and even had moving parts.

“A lot of these signs were in a pretty harsh environment with smoke and grease, and are in rough shape when you get them,” Miner said. “I would take stuff apart to see how it worked.”

As Miner developed a reputation for renovating and repairing old Hamm’s beer signs and other memorabilia, people began bringing him broken old signs that had been sitting in their basement for years or relics from a bar, and Miner was able to get them working again.

“You’d buy these broken down, dirty signs that were not working,” Miner said. “I started making production parts for these signs. I started with the motors for the motion signs. Then a lot of cosmetic parts were also broken or smoke stained. I tell people unless it’s a pile of molten plastic, I can fix it.”

One person came to him with a sign from a bar in a small town in Iowa that literally caught on fire, and even then, Miner was able to gather the required parts to restore it.

“He quickly impressed on me his mechanical knowledge and honesty,” said Barry Travis, of St. Paul, who runs a website with Miner called ibuyoldbeer.com. It’s devoted entirely to acquiring, restoring and admiring old beer memorabilia.

“He’s very fluent in the repair and maintenance of those things and he sourced replacement parts,” Travis added.

The two met 20 years ago when Miner purchased a stylized beer sign featuring a cowgirl with a horseshoe at the Steele County Free Fair in Owatonna. The two hit it off immediately and found common ground both personally and professionally.

“I thought it would be a real win-win to get together with a guy of that caliber,” Travis said. “Everyone is looking for parts on the internet for these, and he was just a perfect person you’d want to join super-powers with.”

Their joint venture, of which Travis finds the parts and memorabilia and Miner repairs them, has attracted inquiries from around the country, from Chicago, to Texas to Michigan, where Travis and Miner are outfitting a brewery and renovated historic paper mill slated to be completed in 2025 in the small town of Vicksburg, about two hours from Detroit.

“We get an unbelievable amount of activity through the website we created,” Miner said. “I have all my parts listed on there. He (Travis) finds them, I fix them, and we sell them. It’s a very good partnership and we just have an absolute blast doing it.”

Miner just moved his shop to a new location earlier this year in downtown Winnebago. The larger building also allows him to work on another of his passions – renovating and restoring vintage jukeboxes.

“I don’t really advertise doing these repairs, but now being on Main Street it’s pretty obvious,” Miner said. “It isn’t retail so to speak, but I’m here just about every day, and I encourage people to come in and look around.”

Recently retired, Miner is looking forward to spending more time on a hobby that has morphed into a successful business with a national reach.

“I can’t just sit around,” Miner said. “I’ve got to be doing something and this is the perfect thing to do in my retirement. It isn’t just a hobby, it’s a passion.”