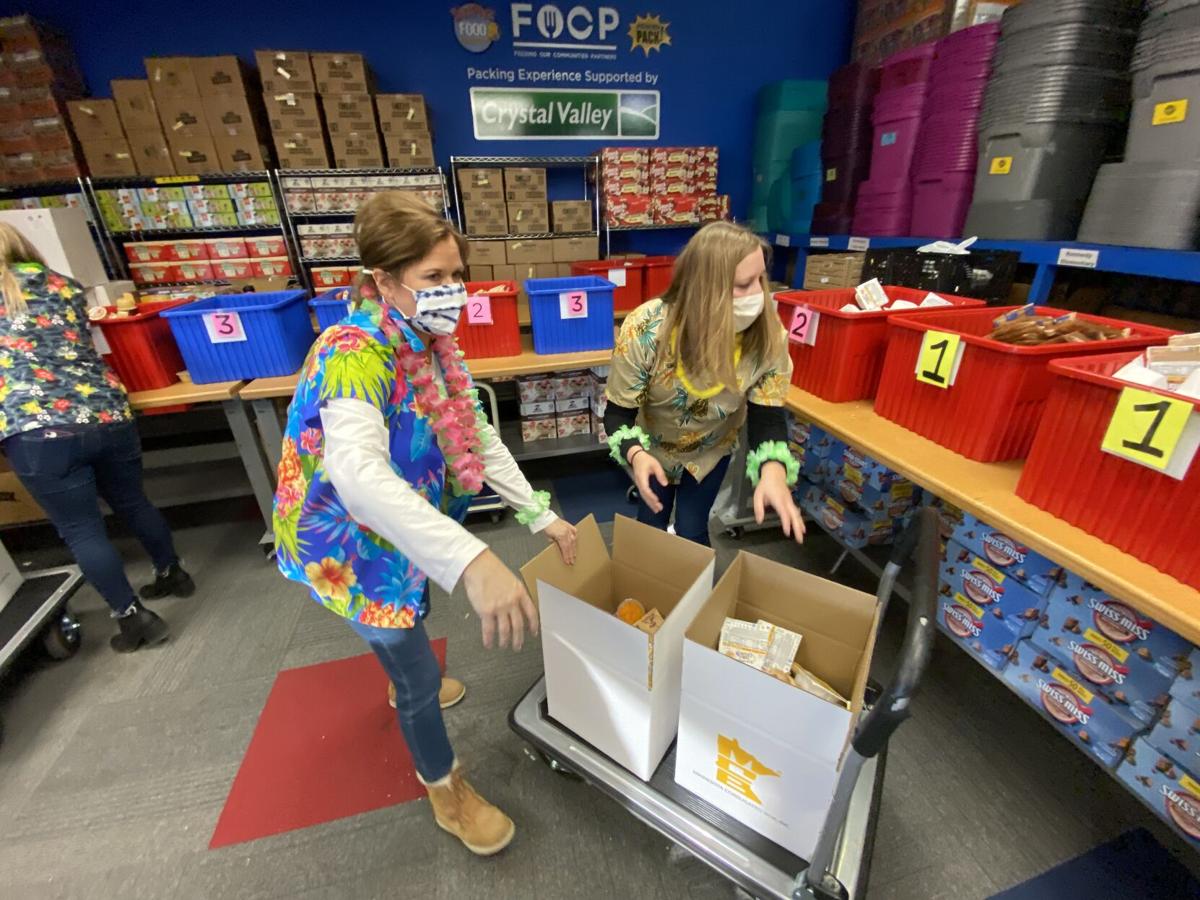 It was a race against the clock Friday as teammates Renee Ehlers (left) and Amy Peterson filled boxes of food items destined for 850 kids in the Mankato area. Both women teach at Maple River West Elementary School in Good Thunder. 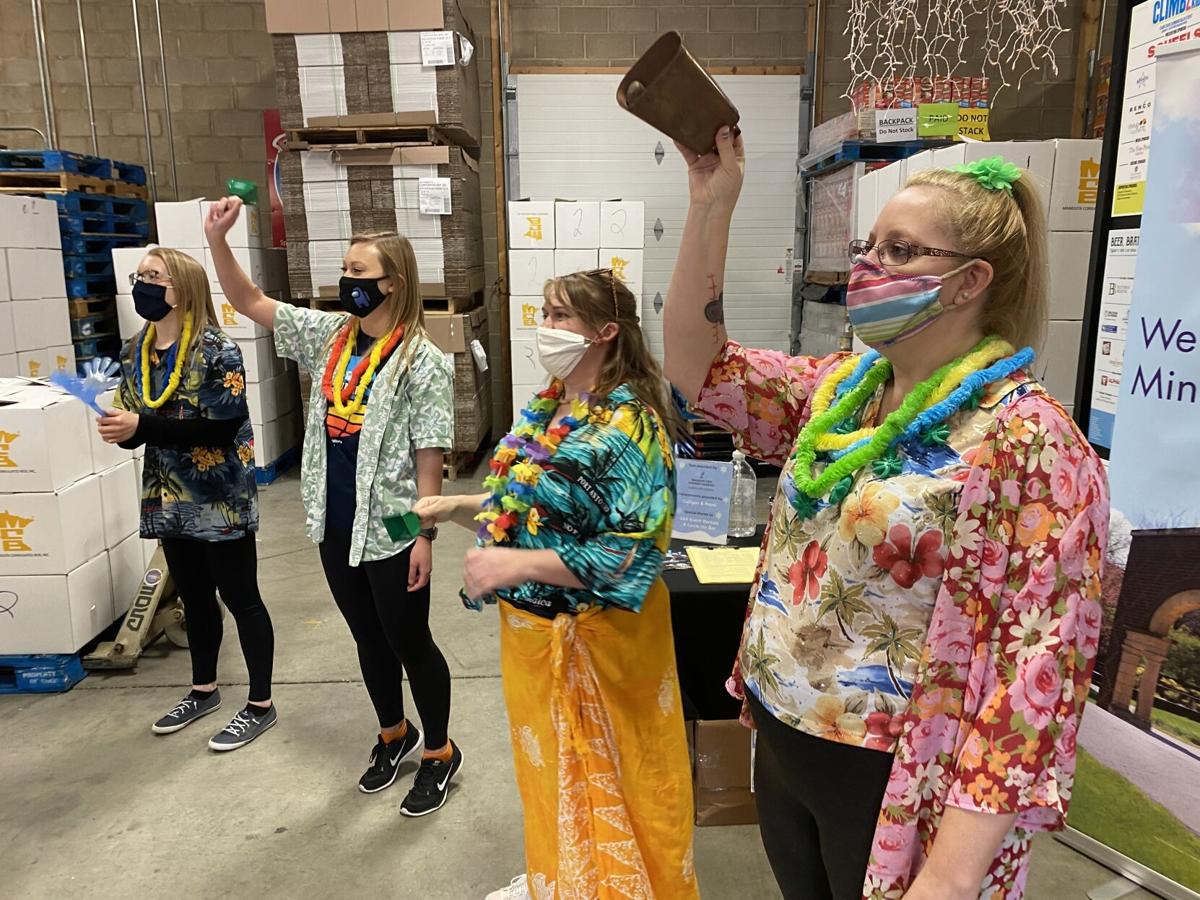 It was a race against the clock Friday as teammates Renee Ehlers (left) and Amy Peterson filled boxes of food items destined for 850 kids in the Mankato area. Both women teach at Maple River West Elementary School in Good Thunder.

NORTH MANKATO — When her students at Maple River West Elementary School in Good Thunder began receiving meals and snacks through Feeding Our Communities Partners Backpack Food Program a few years ago, teacher Brandee Shoemaker was determined to give back.

“This is our fifth year doing this,” Shoemaker said, who along with her colleagues at the school, formed a team for the program’s largest fundraiser of the year — Climb 2 Feed Kids.

“The team came together after kids in our district and our classroom started to receive these meal packets,” Shoemaker said.

In past years, participants from each team raise pledge money and compete in a relay, jogging up and down each set of bleachers at Minnesota State University’s Bresnan Arena in a single day.

But as with other nonprofit fundraisers, the COVID-19 pandemic complicated their plans for 2021.

Instead of holding the event at MSU, the 42 participating teams were given three options this year: competitively pack boxes of food at the FOCP warehouse, deliver food directly to recipients’ doorsteps or fundraise from home.

Lillie Herbst, marketing and communications manager for FOCP, said the program supports about 850 students from five school districts in the Mankato area. With a combination of hybrid, in-person classes and remote learning, the organization had to switch to contactless delivery to mitigate the spread of COVID-19.

“We had to change the way we deliver food, so they (participants) will directly help get the food to the doorstep of the kids,” Herbst said.

FOCP Executive Director Sheri Sander-Silva said the changes also offer a hands-on approach where participants can see the impact of their contributions firsthand.

“It’s always difficult to make major changes and shifts in what you do, but this has been really great for us to also connect with our participants on a deeper level,” Sander-Silva said. “Even with these shifts in changes, we still have 420 people participating. We’re extremely grateful for that community support.”

Shoemaker, team captain for the Rona Runners — a group of 10 teachers decked out in Hawaiian attire from Maple River West — split into two groups on Friday to pack as many boxes as they could, adding an assortment of food items to each box, before taping it up, sealing it and weighing it.

As a leaderboard counted down the time remaining, the two groups worked separately to try and beat the packing time of other teams competing on different days.

“We’ll put their times together,” said Lori Wullmoth, who joined the staff after volunteering for FOCP with her family.

“Having children of my own in elementary school, you can really connect the dots,” Wullmoth said. “If they don’t have energy, they’re not going to be able to thrive. Once I learned about their mission to feed hungry tummies, it’s hard not to be excited about being a part of that.”

While each of the participating 15 pack-off teams commits to raising at least $1,000 from family, friends, co-workers and businesses, Sander-Silva said about 25% of teams have raised twice that amount this year.

“Traditionally, we hope to raise $100,000 or more through the event,” she said. “This year, what we’re seeing with team support is going to help us get a lot closer than we had anticipated.”

The Rona Runners managed to raise more than $5,000, thanks to donations from the Amboy and Good Thunder fire departments and community members. Even staff and students got involved, collectively raising $1,000.

“Each year we find a few more people that are willing to contribute,” Shoemaker said. “This year we had an acquaintance of one of our members donate money to feed a child for a whole year; she had gotten her stimulus check and wanted to do something important with it.”

On Wednesday, Connie Davis, team captain for Derrick Davis, rang bells with other teachers to cheer on their teammates who were tasked with filling and sealing 36 boxes in 20 minutes — until it was their turn to compete.

She formed the team in remembrance of her son Derrick Davis, who died in a car accident in 2016. They’ve been coming back every year since then to support the BackPack Food Program, one of several charities she supports in her son’s name.

“We do it in memory of him — he had a heart to give back,” Davis said. “We wanted to honor the charities he was involved with and then this was another good way.”

Danielle Burger, a family friend from Mankato, joined the team three years ago. She said that even though the activity was different, she still got a good workout from filling the boxes at such a fast pace.

“It was awesome,” Burger said. “I’m so happy that they found a way to for us to still be able to do it.”

For Heidi Hinckley, of Nicollet, it was her first year on the team.

“I’ve never done this and was glad to help,” she said. “It takes a lot of commitment for the group that started it, to be expanding all the time to fill a definite need in the community.”

For Shoemaker, one of the greatest rewards of supporting Climb 2 Feed Kids are the reactions she sees from her own students when they get a package of snacks and meals to take home with them.

“The kids talk about what an important part it was for their weekend and to get the snacks during the week,” she said. “We want to support this as much as we can.”