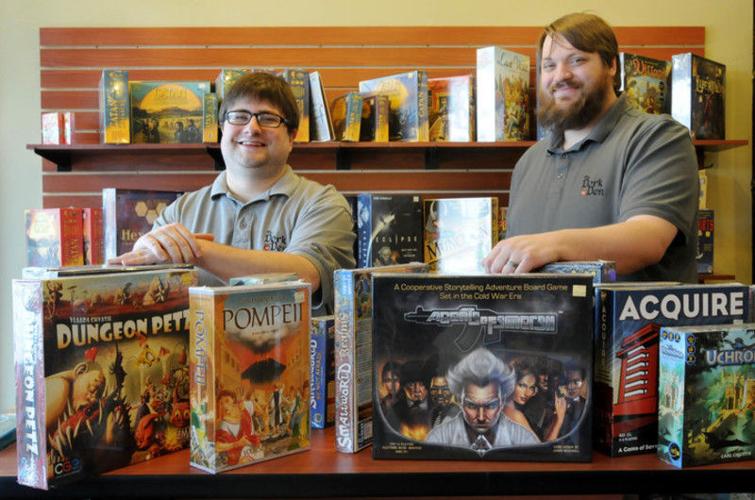 Joe Huber (left) and Greg Fenske are business partners at The Dork Den. 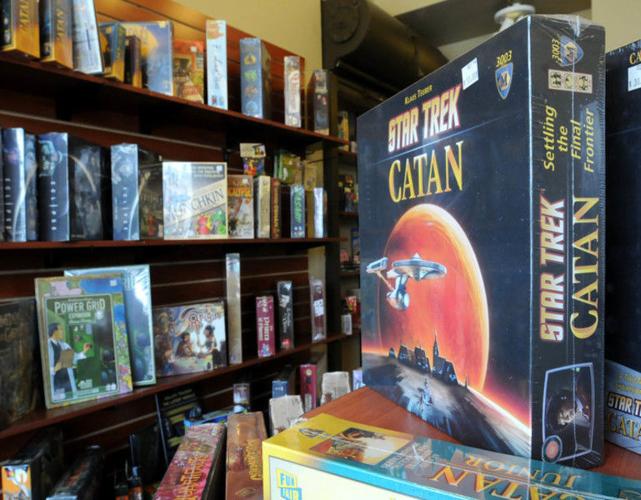 The shop carries a wide variety of demo games for customers to try out.

Joe Huber (left) and Greg Fenske are business partners at The Dork Den.

The shop carries a wide variety of demo games for customers to try out.

Joe Huber and Greg Fenske, business partners at The Dork Den, met in 2011 while working at a similar business. As the two discovered they held an identical passion for board games they decided it was time to try out some of their own business ideas.

Located one block north of their initial location on Riverfront Drive in Mankato, The Dork Den has kept a stream of comics, graphic novels and board games available for their enthusiasts.

“Originally, we had about 800 square feet in our other location,” Huber said. “After our initial year, we had found we had grown which required a larger space.”

During the summer of 2012, the Dork Den moved to its current location on Riverfront. By January of 2014, they expanded yet again, growing within their building to occupy 1,800 square feet for retail and nearly that much space for playing board games.

“Our play space is a big part of creating that community,” Huber said. “It lets our customers know that there are lots of other people out there who play these games as well. No one wants to spend $40 or $50 on a board game and then watch it sit on their shelf. We want to be a place where board gamers can meet people who play these games too.”

Throughout the week, The Dork Den hosts many events to accommodate and encourage game playing among their customers with entire evenings dedicated to activities like, Yu-Gi-Oh, miniature gaming, Dungeons and Dragons and board games. The nightly games kick off around 6:30 p.m. with a wide age range of game enthusiasts from teenagers to the elderly, all who enjoy a little friendly game competition.

“The idea of play has been vital to our business model,” Huber said. “We’ve found that our customers want a place to play and to meet other people.”

The Dork Den also has a demo board game library of more than 50 titles. If a customer cannot decide which game they’d like to purchase, they are welcome to try a demo of a game they are considering. When a customer demo’s a board game, they are able to sit down with others while learning its specific rules to see if they liked it. If a customer requests a game, in which there isn’t a copy to demo, chances are Huber and Fenske know of somebody in the community who could bring that particular game down to the store for a personal demo.

“The gaming community is pretty close knit,” Huber said. “They are very good about showing people games and getting people into their hobbies because that means there are more people playing their hobbies.”

Huber and Fenske believe that those who play the Xbox or games online are almost the same communities as those who frequent their store.

“For a long time everyone was playing on their Xbox or PC but we are seeing a shift in that trend,” Huber said. “Although a lot of our games have iPad apps or other electronic versions also available, we are finding that people still prefer the interaction of playing with someone who is across the table. We feel our customers enjoy sitting across the table rather than talking through a headset to each other.”

For Huber, he has been a hobbyist of board games since the age of 13 when he started actively playing Magic: The Gathering. Since that time, he has dabbled in many games including everything The Dork Den offers. Fenske too, started his love affair with board games as a teenager but a lacked competitor willing enough to play on a consistent basis.

“In the Mankato area there have been places like this that have come and gone,” Huber said. “We want to be that positive foundation or rock, a place where people can go to meet other players. We want to find the people who are playing the games. Not just having them sit on their shelf collecting dust. It is important to us both as enthusiasts.”

Recently, Fenske and Huber hosted a game day at Waseca’s public library. Where the Mankato school district participates in late mornings, Waseca does the opposite with a monthly early out day. On those days the library tries to do something special for the children who may not have a place to go or are looking for something different to do. As a result, The Dork Den was invited to host a game day at the library.

“We had a very diverse group,” Huber said. “There were kindergarteners to seventh graders all playing games together for an afternoon. We had a great time.”

Currently, The Dork Den sells primarily to those who are south and southwest of Mankato rather than south east, as both Rochester and Owatonna have similar stores. Miniatures games such as Warhammer 40K, Warmachine/Hoarders, tend to draw customers from a greater distance as the closest store carrying them is in the Twin Cities. This allows the Dork Den to draw customers from northern Iowa, as well as some parts of South Dakota.

“For us, Magic: The Gathering is the big boy on the block as far as collectible card games but then so is Yu-Gi-Oh,” Fenske said. “We tried to support Yu-Gi-Oh when we first opened but the community just didn’t take to it. We got one or two players at a time. Finally, a guy who’s really passionate about the game kind of spearheaded the movement, now we have Sundays and Wednesday dedicated to that game.”

A game for everyone

The Dork Den’s future goal is to become more active by hosting gaming events out in the community. Fenske and Huber would like to bring gaming out to the people, as they feel it is a great way to encourage community spirit, as well as foster future players.

“I guarantee there is a game out there for everyone,” Huber said. “We have games that can take as little as 15 minutes or up to 15 hours. That has been the biggest change in the board game industry. Today, most games have an end point. They can no longer last forever. Most of the games made will fit with that hour to hour-and-a-half time frame. There still are a few epic games that are all day events but most games aren’t.”