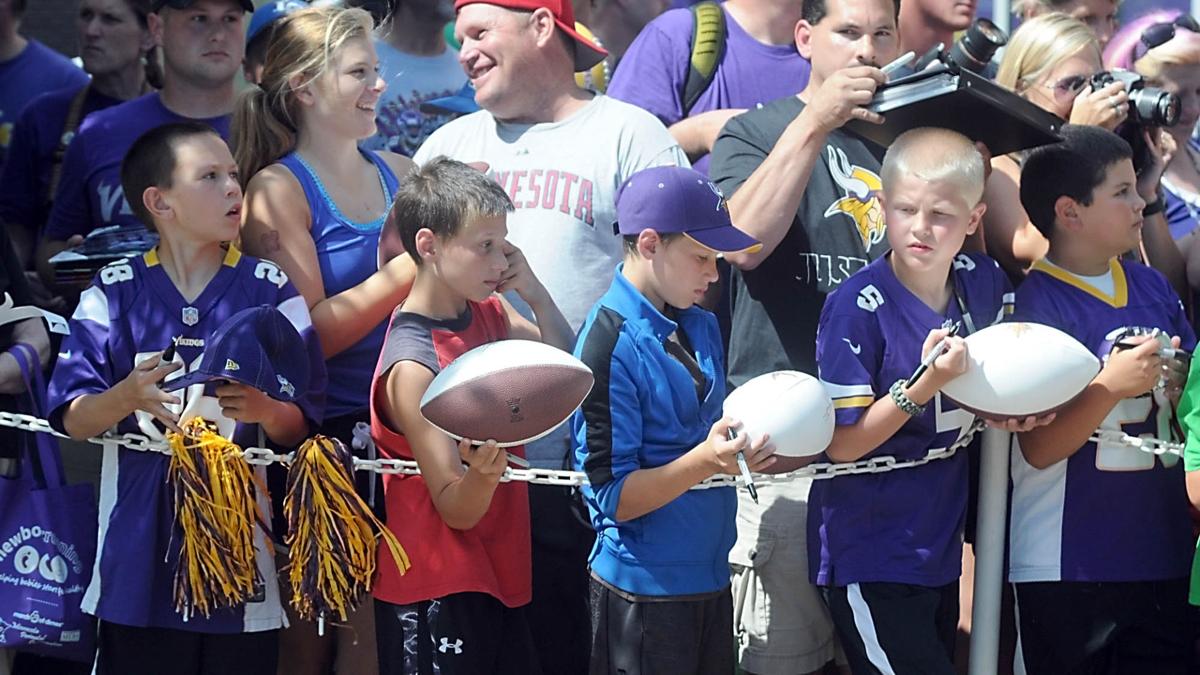 Young Minnesota Vikings fans wait to have their footballs signed by their favorite player as the team arrives for training camp Saturday. Photo by Pat Christman 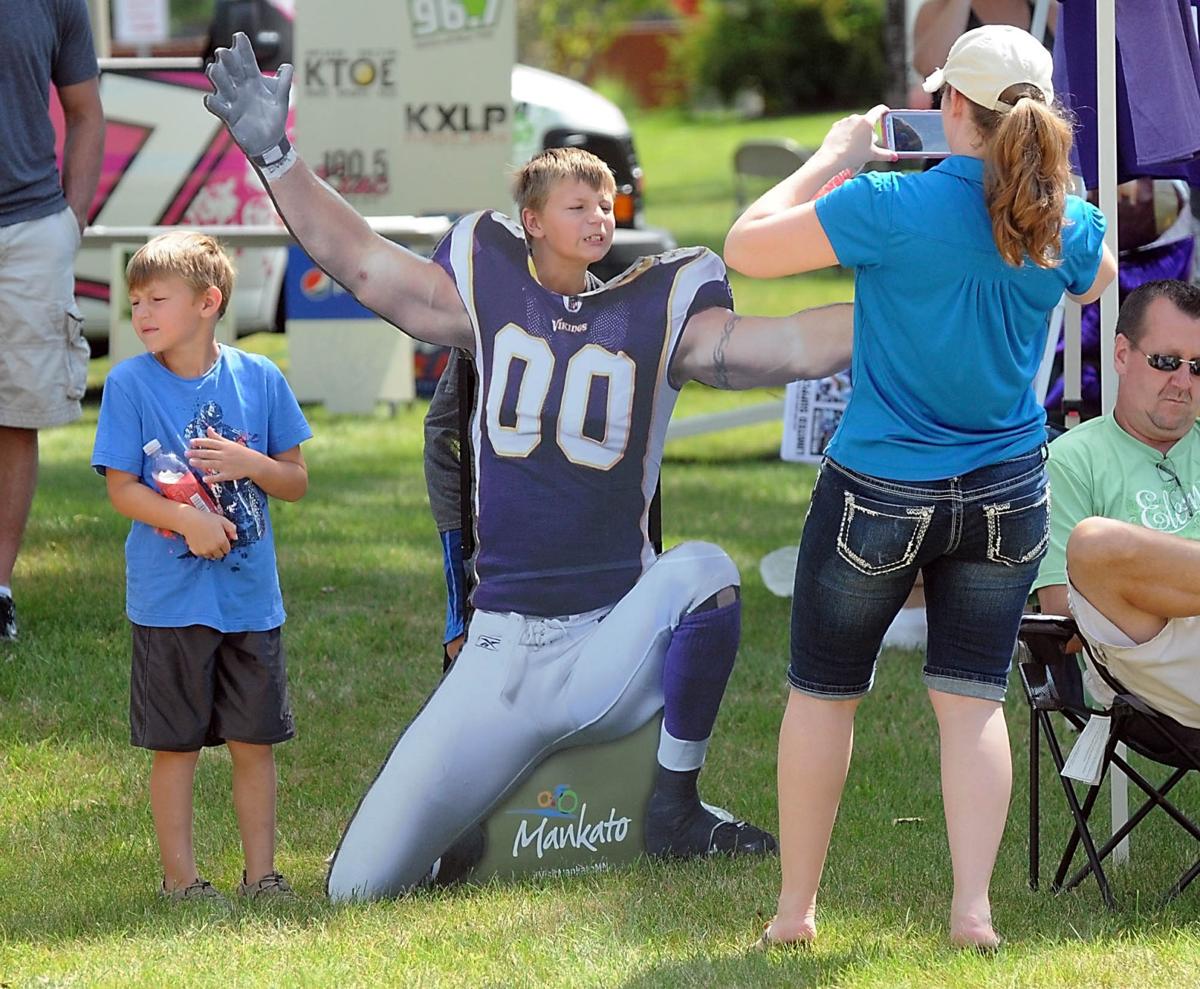 Anna Thill takes a photo of her son Raleigh, 9, during a Vikings welcome event Saturday at Minnesota State University. Photo by Pat Christman

Young Minnesota Vikings fans wait to have their footballs signed by their favorite player as the team arrives for training camp Saturday. Photo by Pat Christman

Anna Thill takes a photo of her son Raleigh, 9, during a Vikings welcome event Saturday at Minnesota State University. Photo by Pat Christman

But then he met his wife. Darla Lodoen's first exposure to the Minnesota Vikings came when she was still in the womb, she likes to say. Her mother would lie on the ground with her stomach facing the family's black and white TV so her unborn daughter could follow the games.

Is it any wonder purple and gold run so deep in Darla's veins? Or that when she married Garry, she issued this stern ultimatum: the Vikings or me?

"I loved her, so I had no choice," Garry Lodoen said, his eyes twinkling with mirth. That was in 1982, he said. It only took about a year for Darla to convert him into the die-hard Vikings fan he is today.

Standing in front of the Julia A. Sears residence hall at Minnesota State University Saturday, he rolled up his sleeve to show off the large, purple and gold tattoo stretched across his right bicep. His beard was divided into three short braids.

He and his wife were in Mankato to welcome the Vikings to the first day of training camp. They live in Eden Prairie, though in the past they traveled to the practices from Anchorage, Alaska.

Season ticket holders for 20 years now, they recently decided to buy a house a little bit closer, Garry Loeden joked. They also have season tickets for the under-construction Vikings stadium — the seats are in the first row, on the 45 yard line.

"On the Vikings' side," Garry said, beaming widely.

Garry and Darla aren't just Vikings fans though. They're part of the Viking World Order, a members-only group known for sporting rugged Norse costumes and throwing some of the state's best tailgating parties. Many them also have tattoos, inked into their skin as a sign of loyalty, and nicknames.

That's right. Syd Davy doesn't even eat cheese, if Loeden is to be believed. One of the biggest things Davy is known for is catching former receiver Randy Moss when he would jump into the seats after scoring touchdowns.

He's a bit of a legend among the Order, which considers itself a family more than anything else. A family that was well-represented at MSU this weekend.

Purple hair blowing in the breeze, Kristi "Lady Archer" Etter was celebrating her 15th year at training camp. Across the street, Visit Mankato was celebrating 50 50 years of training camp with a party for the close to 200 fans lined up outside the residence hall to get autographs and pictures.

"Can I get a picture?" at @Vikings training camp kickoff. #katovikings pic.twitter.com/PI6eJXHB8o

Kristi Etter and her husband Gary Etter (Sir Archer) used to come from out of state to catch the "preseason to the preseason" at MSU, they said.

Now, they live down the street from the Loedens in Eden Prairie.

"We're a close family," Kristi Etter said. "... The camaraderie is unbelievable. We just moved to Minnesota three years ago and before that we drove up from Central Iowa for all of this. When we moved, we didn't even have to get used to anything. We already had friends here because of the Order. It was an easy transition."

The Etters aren't the only ones that have crossed state lines because of the Vikings. One fan was from Nebraska and another from California.

And perhaps, even more shockingly, one was from Wisconsin.

"No, we're not Packers fans," Natasha Lee said. She had brought her 2-year-old daughter Aleah and 4-year-old son Chase to Mankato for their first training camp. "We were born and raised Vikings."

Lee, the Etters and the Loeden, weren't interested in getting specific autographs or seeing certain Vikings, they said.

Rookies or veterans — they were all the same.

"They're all Vikings," Darla Loeden said. "We like them all."

They were just there to show their support.