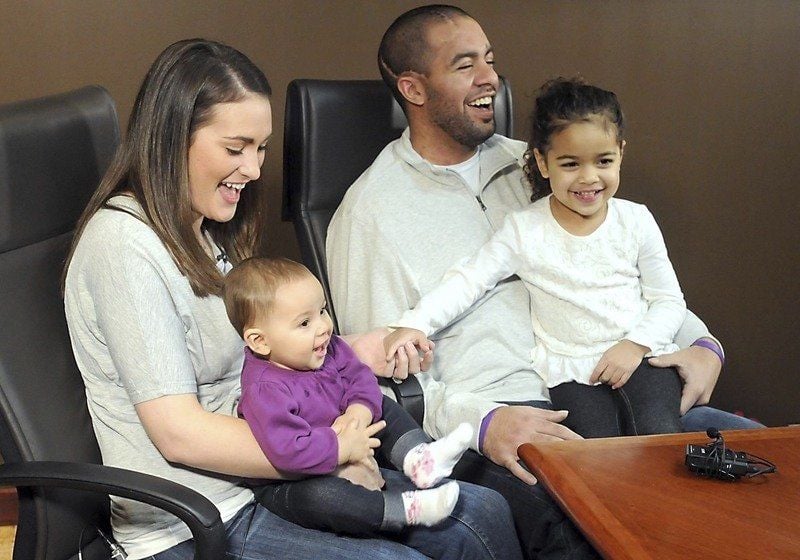 Molly and Isaac Kolstad hold their daughters Malia (with Molly) and Haidyn during a press conference Wednesday. Photo by Pat Christman 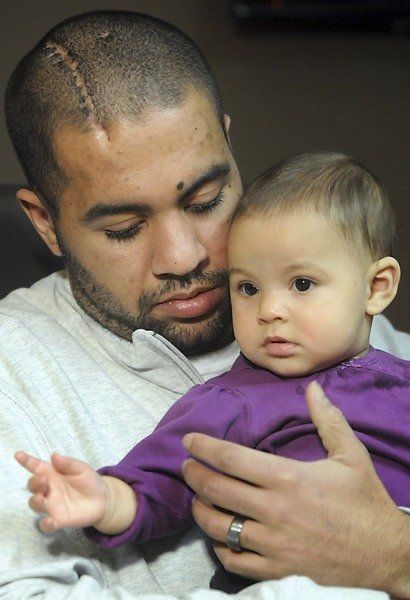 Molly and Isaac Kolstad hold their daughters Malia (with Molly) and Haidyn during a press conference Wednesday. Photo by Pat Christman

MANKATO — This birthday celebration was more than 90 percent unlikely. Those were the odds against Isaac Kolstad surviving a massive head injury.

Instead, on his 25th birthday, he stood up and talked about it.

“I want to get a lot better, and I’m feeling like I am getting better,” Kolstad said at a press conference Wednesday in Mankato.

Kolstad, a former Minnesota State University linebacker and father of two young girls, can walk, run and even joke around. The Mankato native has overcome a traumatic brain injury sustained in a downtown fight to get there.

Doctors told Kolstad’s family his odds of survival were slim, but the Mankato native survived and continues to recover.

“Today is definitely the biggest blessing we could ever ask for,”  Kolstad’s wife, Molly, said Wednesday. “There was a point where we didn’t think we would have any more birthdays, and to be able to be able to have one today is amazing.”

Kolstad appeared at ease in his first local media interview since the incident. He smiled when talking about sports and his recovery and answered questions in complete sentences.

He even predicted a 24-17 win for the Mavericks on Saturday in the national championship game in Kansas City, Kansas. Kolstad will attend the game with his father.

The past seven months have been filled with milestones for the family. Molly Kolstad gave birth to their second daughter, Malia, in June, while Isaac was clinging to life on a different floor of Mayo Clinic Health System in Mankato.

Kolstad moved to a specialized Twin Cities rehab facility in late July. He stayed there until October, when he returned to Mankato.

“I can feel myself getting better through therapy. That is my favorite part,” Isaac Kolstad said.

Kolstad said he plans on eventually returning to work at Fastenal, where he worked as a sales representative. Molly Kolstad, a nurse, is completing a bachelor’s degree in nursing through MSU and also plans on returning to work.

The family has received more than $200,000 in donations through its YouCaring page and other events, Molly Kolstad said.

Shelley, 21, then punches Kolstad from behind Kolstad as he walks away. Nelson then kicks Kolstad in the side of the head while he lays on the ground.

Kolstad’s lawyer, Ken White, did not allow questions about the incident or the trial on Wednesday.

Kolstad was taken to Mayo Clinic Health System in Mankato after the fight and had emergency brain surgery May 13. He was in a medically induced coma and was utilizing life support to breath.

“Isaac’s lungs also sustained severe injury, resulting in the inability to breathe on his own,” Kolstad’s brother-in-law, Mike Fleming, wrote on CaringBridge May 17. “Isaac had a significant amount of his brain tissue that was no longer viable removed during that procedure.”

He was taken off life support a week later and responded to a command for the first time in early June.

Molly Kolstad gave birth to Malia June 4. She had an emergency cesarean section for the delivery, because Malia had the umbilical cord wrapped around her neck four times.

Kolstad’s condition improved in June and he was taken off life support, though he doesn’t remember his first thought when regaining consciousness. He was moved to a specialized Twin Cities facility in late July.

Molly Kolstad updated Isaac’s progress through his CaringBridge page, from walking to talking and eating.

Kolstad made his first trip back to Mankato in late August, surprising his co-workers at Fastenal and watching MSU football practice. He attended the team’s season opener in early September, leading the team onto the field.

Chris Schaudt, Kolstad’s former MSU teammate, said he was at the hospital every day after the fight happened. He called Kolstad’s improvement “miraculous.”

Therapy has been a slow but steady process, Molly Kolstad said. She compared his recovery to a marathon and said his relationship with his daughters has partially inspired him to recover.

“We always told ourselves this is only temporary,” she said. “As long as we get through this we’ll have the rest of our lives together.”

“Nothing else can bring us closer than this, than taking care of your husband in his weakest moment.”

Since October Kolstad has been participating in the activity-based locomotor program at the Courage Center. The program has helped him improve his running and walking ability.

Kolstad set a goal when he started the program to reach 8 mph on the treadmill. He reached that goal Wednesday, but it had a surprise result.

Kolstad ended up wearing out the treadmill to the point where the center needs to buy a new one.

“Normally people use (the treadmill) to walk but not me,” he said while laughing.

Kolstad has met Jack Jablonski, a former Benilde-St. Margaret’s hockey player who was paralyzed during a hockey game, through the program.

He’s tried to be a model for other people who have sustained traumatic brain injuries. He’s also been arguably the biggest cheerleader for the MSU football team, giving the team a pep talk in November.

“It’s seven months out," Molly Kolstad said, "but I know that he’s continuing to grow."