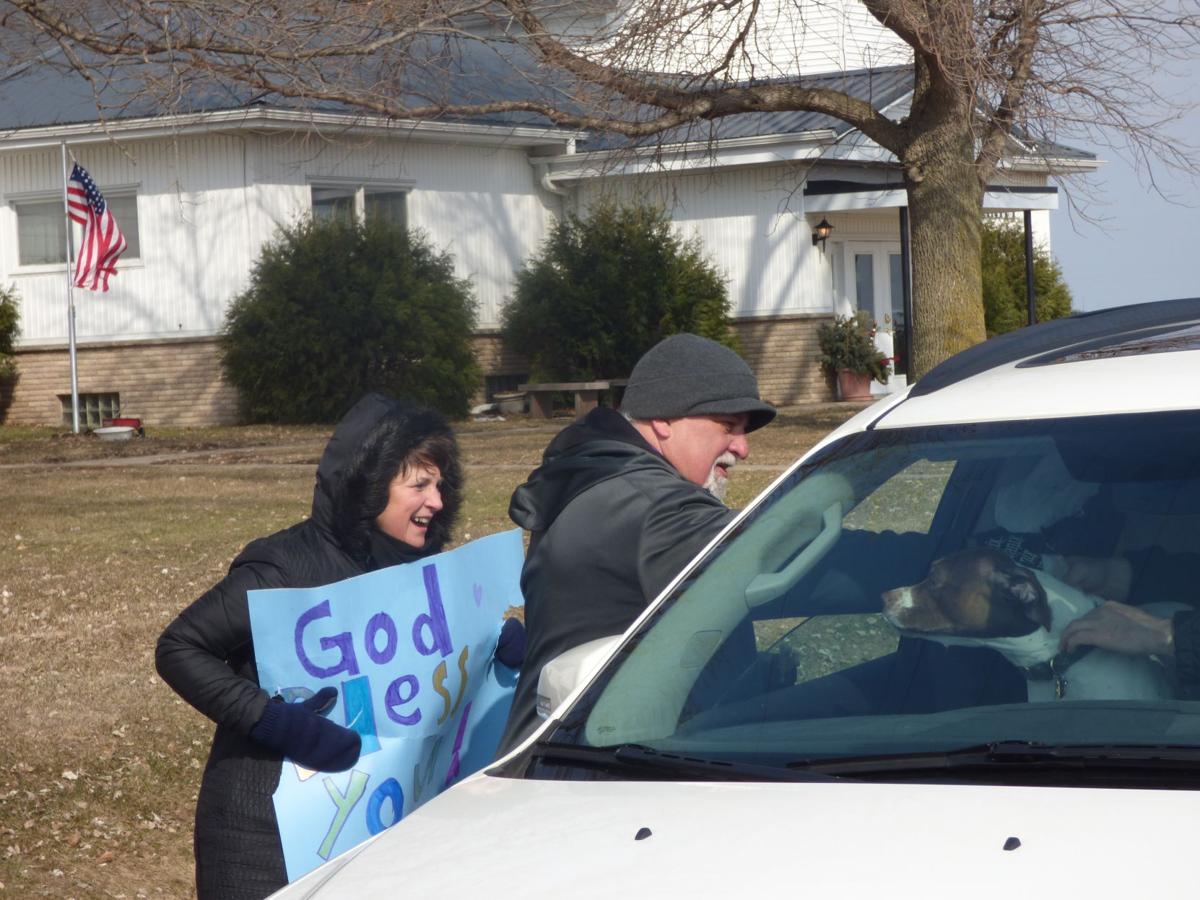 Patty and Dan Boeder, of Gaylord, greet a driver and his dog at the drive-thru service Sunday at Trinity Lutheran Church in rural Sibley County. 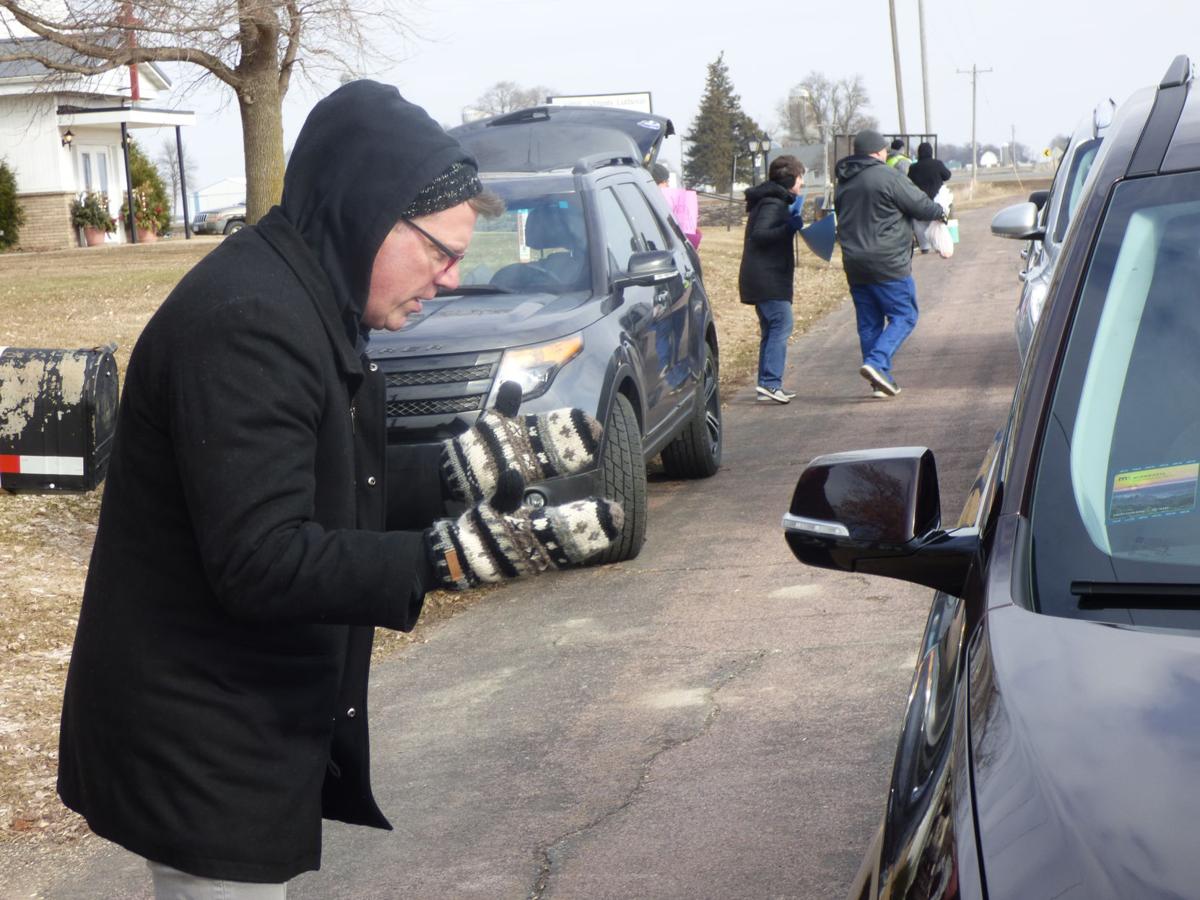 Pastor Scott Richards of Trinity Lutheran Church near Gaylord prays with a family at a drive-thru service Sunday. 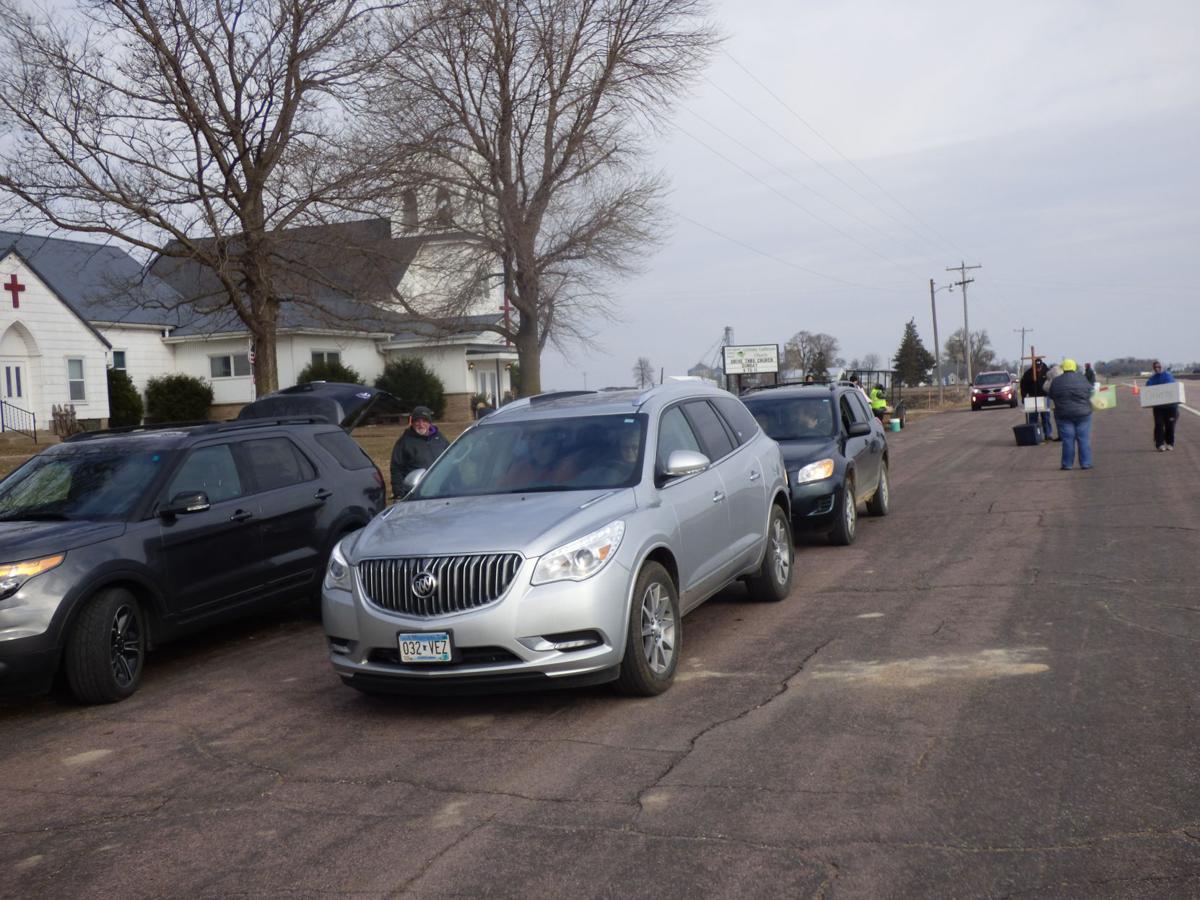 A dozen volunteers took food shelf donations, passed out sermon packets and breakfasts, and prayed with churchgoers at a drive-thru service Sunday at Trinity Lutheran Church near Gaylord.

Patty and Dan Boeder, of Gaylord, greet a driver and his dog at the drive-thru service Sunday at Trinity Lutheran Church in rural Sibley County.

Pastor Scott Richards of Trinity Lutheran Church near Gaylord prays with a family at a drive-thru service Sunday.

A dozen volunteers took food shelf donations, passed out sermon packets and breakfasts, and prayed with churchgoers at a drive-thru service Sunday at Trinity Lutheran Church near Gaylord.

GAYLORD — March 15 was probably the last Sunday that Pastor Scott Richards of Trinity Lutheran Church near Gaylord would lead a traditional, physical service for the foreseeable future, but it gave him a chance to prepare the congregation for what was to come.

“Everything is improv right now,” Richards said. “It’s trying to figure out how can we still be a community while we’re apart?”

His answer was a drive-thru church service where people wouldn’t even have to leave their cars.

“We can maintain a safe distance,” he said. “People would still have a chance to see others, which I think is a blessing.”

Trinity Lutheran and every place of worship in the Greater Mankato area and beyond faced a new normal as many spent their first weekend not meeting as a group in one place to prevent the spread of COVID-19. Some went online and others found a balance between safety while still meeting in a physical space in the form of drive-thru and drive-in services.

Richards is pastor for two churches with about 125 members at each. Since St. Paul’s Lutheran Church in Gaylord became a food distribution site for the school district, Trinity Lutheran, a rural church about eight miles southeast of town, has taken in both congregations.

On Sunday, Richards and a dozen volunteers greeted a steady stream of cars and trucks — many with families — giving the kids Sunday school materials and adults a take-home packet filled with Bible verses, a sermon, psalms and hymns.

They gave each person a breakfast sandwich catered by a local restaurant, a muffin and an orange. Richards then led them in prayer while they sat in their vehicles.

“I think it’s important for people to actually see people,” Richards said. “Once that train of thought left the station, it just picked up steam and I went with it.”

David Kahle, a lifelong member of Trinity who farms just a mile down the road, said services there typically draw about 30-40 people. But 100 people came through the drive-thru this Sunday.

He said it’s hard to say if they’ll continue with this approach; but other churches, like a neighboring congregation in Norseland, have taken notice and expressed interest in doing something similar.

“We had good turnout today and the people that are helping with it all think it’s working well and we’re enjoying it,” he said. “We’re still figuring it out, but this might be more ongoing than you think.”

Jodi Johnson, a member of St. Paul’s in Gaylord, thought a little humor would lighten people’s moods during a time of high anxiety.

“Levity is important,” she said. “We thought it would be funny to give every car a roll of toilet paper. People are finding it amusing.”

The volunteers passed out breakfast sandwiches from Hahn’s Restaurant in Winthrop and collected cans of food for the Sibley County Food Shelf.

“With the fear of scarcity out there, it was nice to give people a chance to practice generosity,” Richards said.

Trinity wasn’t the only church to experiment with an altered in-person service while maintaining a healthy distance.

At Living Word, a Lutheran church in Mankato, about 30 cars parked on an adjacent grass field for a drive-in service, complete with a hay wagon, sound system, a pulpit and an FM radio transmitter for churchgoers to listen through.

Pastor Chris Kumpula said about 20 hours of his 90-hour work week was spent on the phone brainstorming with other Lutheran pastors on how to best serve their congregations as social distancing becomes the norm. Like Trinity, church-goers spent the service in their own vehicles, albeit spaced out to keep a safe distance.

“Everyone was waving to strangers in the car next to them,” Kumpula said. “There are some who came from a long way off just to be part of a worship service because they really feel that they need that. It’s just so clear that people are really frightened about where this thing is going.”

Kumpula predicts that more churches will experiment with similar approaches as they balance the need for community while also addressing people’s safety. He said they are planning to continue offering drive-in services in the weeks to come.

For Richards, what Trinity Church does next Sunday will depend a lot on the ever-changing dynamics of the spread of COVID-19. Either way, he intends to continue to offer services in one form or another.

“I think the big challenge for churches moving forward in this time is we’re not going to worry so much about the program, it’s about keeping people connected and giving them purpose,” Richards said.