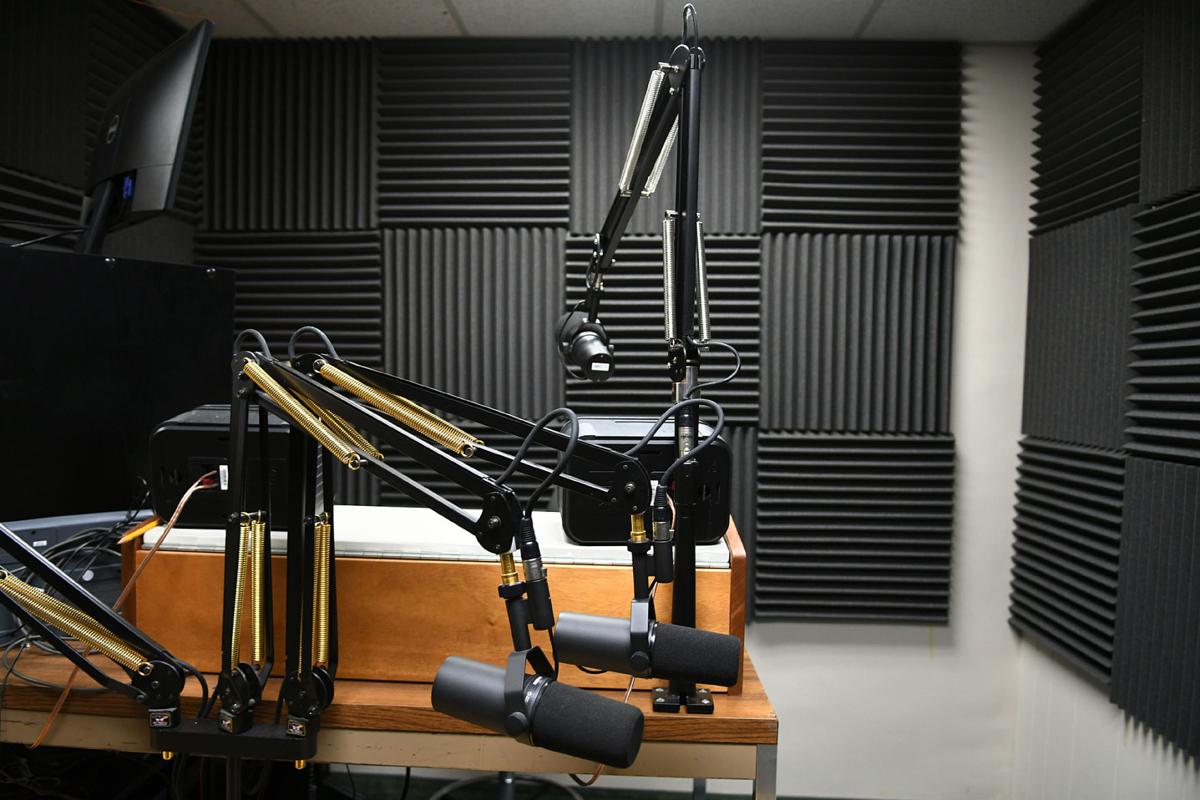 The upper level of the Arts Center of St. Peter already includes some administrative offices and a studio for KMSU, which the center can use to record performances in the lower level or talks with artists. 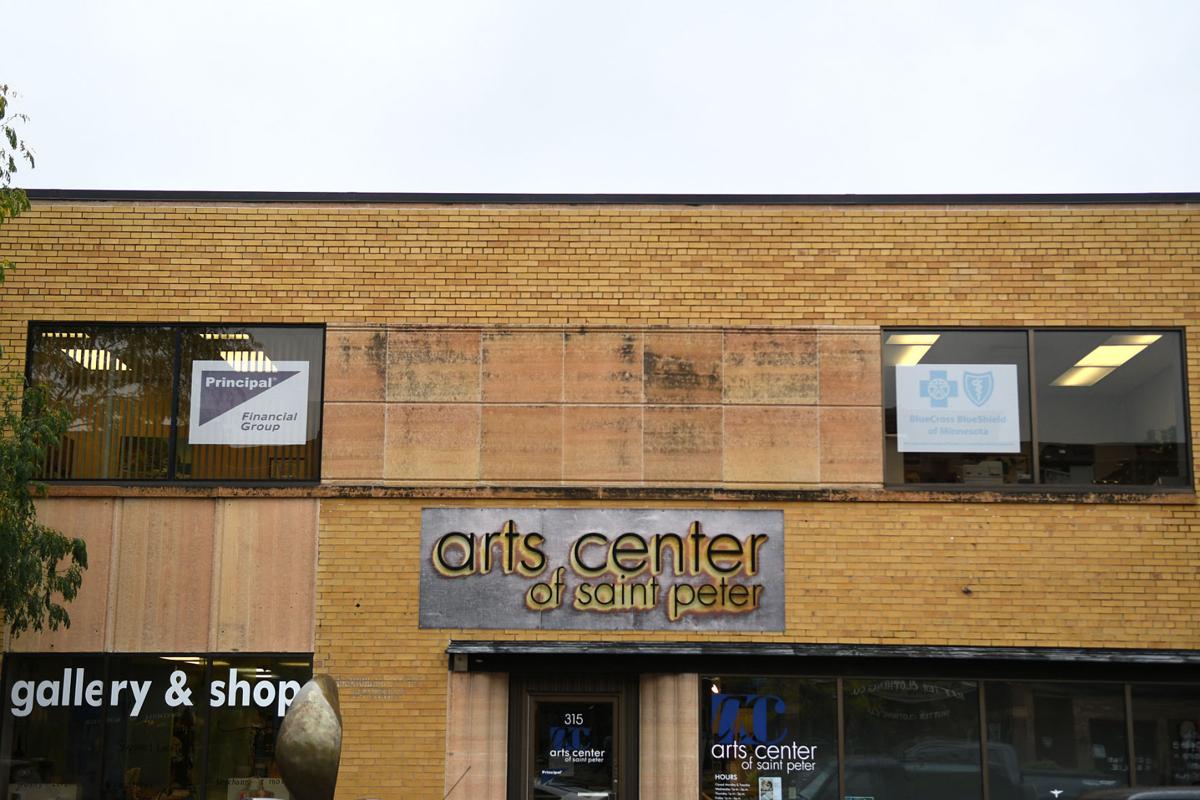 The Arts Center of St. Peter will be expanding into the second floor above their current space. Ann Fee, executive director of the center, said that the expansion will double their programming space, giving classes a permanent space.

Ann Fee, executive director of the Arts Center of St. Peter, holds the abstract for the expansion space on the second level above the center. Fee said they will be completely moved in by Jan. 1.

The upper level of the Arts Center of St. Peter already includes some administrative offices and a studio for KMSU, which the center can use to record performances in the lower level or talks with artists.

The Arts Center of St. Peter will be expanding into the second floor above their current space. Ann Fee, executive director of the center, said that the expansion will double their programming space, giving classes a permanent space.

The Arts Center of St. Peter is experiencing some upward mobility. Literally.

The Center, on Minnesota Avenue in St. Peter, has been operating with a rent-paying tenant on its third floor. But now, with Principal Financial getting ready to relocate to new quarters just down the street, the Arts Center is ready take the leap of occupying the entire building.

“This officially ends the situation of having rent to help us sustain our programming,” Arts Center of St. Peter Executive Director Ann Fee said.

The Arts Center purchased the building in 1999 using insurance money from an old school building it lost in the 1998 tornado. The business model at the time was to occupy the main and lower levels and allow the current upper-level renters to stay. The rent income was a good source of revenue.

But then in 2014, the Arts Center crafted a new strategic plan that included, among other things, a goal of one day occupying the entire building should their renters decide to leave. The ball on that began rolling last January when one of the two upper-level tenants, an artist, announced his departure.

In that space the Arts Center put its administrative offices and meetings as well as a satellite KMSU recording studio. Fee says they made up for the lost revenue with “new grant funding and efficiencies all over the place.”

Then just last month, Principal Financial let the Arts Center know of its plans to relocate. They’ll leave in December, giving the Arts Center the entire building by Jan. 1.

“On the downside, it’s a revenue hole of about $12,000 per year for me to fill,” Fee said. “On the upside, for the past year or so we’ve had writing, weaving/fiber arts, and music programs ready to explode if only we had more space. … So, there may be a need for extra-extra fundraising or to pull from our reserves, but there’s enough momentum in those programs that I’m confident we won’t need ‘bridge’ funding for long, if at all.”

Two programs that will see enhanced visibility are the fibers program and the writing program.

Juana Arias, who oversees both the clay programming and fiber programming, said she’s excited the Arts Center will be able to offer one of the few fiber programs in the region. She said they’ve been working to acquire looms of various sizes so students can get experience with a variety of styles.

“Our clay studio manager (Arias) also happens to be an accomplished fiber artist,” she said.

Arias said a recent donation will give their fibers program a head start. A local fibers artist who was downsizing her studio has donated equipment and materials to the Arts Center. That, combined with the handful of looms they already owned, should set the new fibers program up nicely, Arias said.

“As a fibers artist myself I’m super excited,” she said. “There’s not a lot of that happening around here and it’s a program that gets cut from education all the time.”

During her undergrad years at Minnesota State University, Arias said the Art Department discontinued the fibers component of its program.

The writing program will also get a boost. Rachael Hanel, an associate professor in the Mass Media program at MSU, said the classes she teaches now at the Arts Center have been meeting in the Arts Center’s common areas. It will be good, she said, to conduct those classes in more suitable surroundings.

“It’s fine but it would be nice to have a specific space set aside,” Hanel said, “a space that looks a little more literary, like a book shelf and some books, to give off that literary vibe.”

With the dedicated space, Hanel said she expects the program offering to grow.

As for that tenant, Principal Financial, the move down the street is something that clients have been asking for.

Business owner Buster West said a good chunk of their clients are aging; they didn’t like climbing the flight of stairs to get to the Principal Financial offices. So they’ve been looking for years for locations on Minnesota Avenue that would be a good fit.

“We’ve been thinking about a move since 1979. The biggest thing we hear from our clients as they’re aging is that they’re struggling,” Buster West said. “I have tried to buy almost every building in town. It’s tough to make the numbers work unless you have residential above you. And I don’t find handyman work that much fun. To find good office space on the ground floor here is rare.”

They’ll be moving just a few blocks away to the other side of the street near the St. Peter Food Co-op.

“We’re hoping this will work out well for the Arts Center,” he said. “It will give them more opportunities.”

Principal Financial’s new location will give its clients easier access to its offices and offer more and better parking. The name will also be changing to West and Mager Insurance and Financial Services to reflect Buster and son, Casey West, and Carolyn Mager.

Casey West said that, on occasion, they’d find a satellite location where they could meet clients.

“We use River Rock coffee,” he said. “That’s our alternative office. And we do go to clients’ homes.”

Whether the Arts Center’s move to occupy the entire building will work out will depend on consistent programming and community use.

Fee says she’s confident they’ll be able to offer and schedule enough events in the space to more than make up for the loss of rent revenue.

NICOLLET Delores E. Gleason, age 92 of Nicollet died peacefully on Thursday, September 16, 2021, at her home in rural Nicollet with her family by her side. Funeral service will be 2 pm on Tuesday, September 21, 2021, at the Trinity Evangelical Lutheran Church in Nicollet. Pastor Micah Ploche…