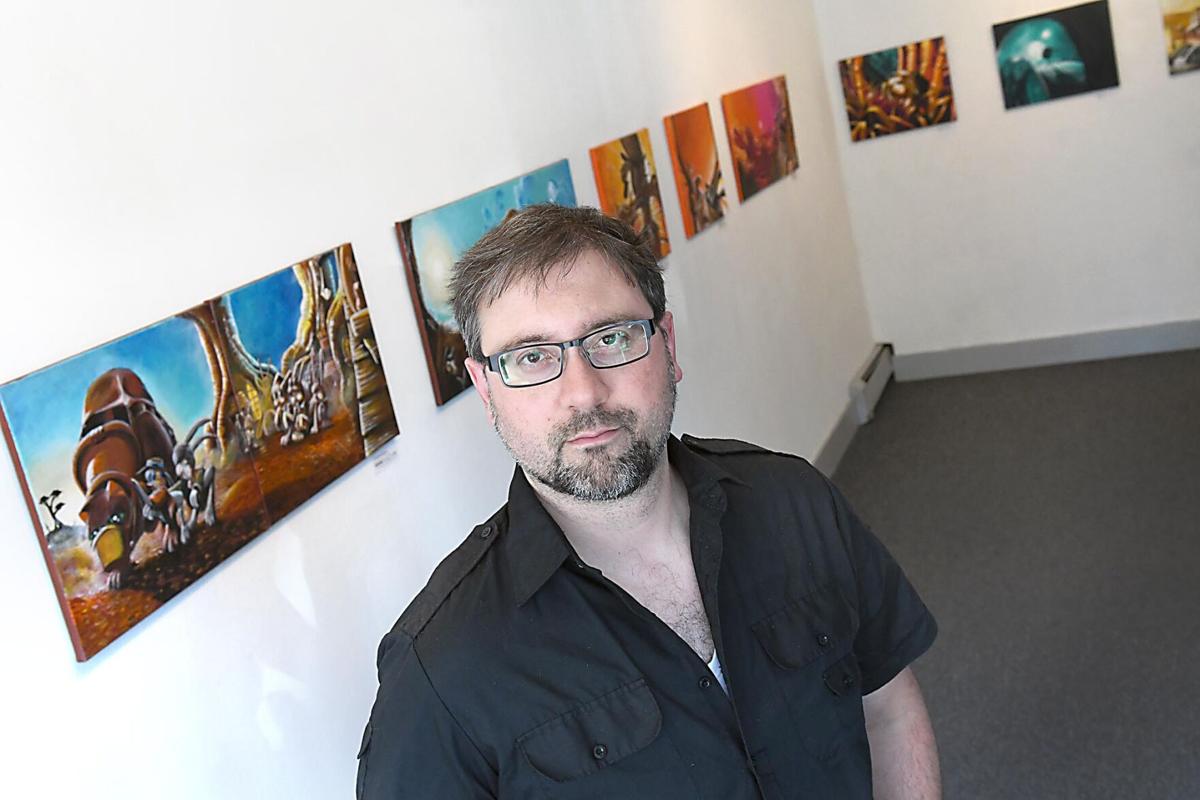 Graphic artist James Mackey debuts his latest children’s book, “Faster Than Speed.” The illustrations from the book will be exhibited at the 410 Project until June 20.

“Home At Last” by James Mackey. His illustrations are up for auction. Proceeds go directly to help ECHO Food Shelf.

“Shopping” by James Mackey from his most recent book.

“I loved picture books as a kid,” Mackey said. In particular, he was intrigued by the intricately detailed “Who Needs Donuts?” by Mark Alan Stamaty and the Terran Trade Authority book series that had illustrations of wrecked spaceships and alien worlds.

But as a father of three boys — now all in their teenage years — he wrote with his kids in mind.

“I did a book a long time ago called ‘Tormenting the Gingerbread Boy’ for my oldest because he loved the ‘Gingerbread Boy,’” Mackey said. “And even when he was little, he loved macabre things.”

Macabre — that’s something Mackey knows a thing or two about in his art.

“I’ve always been drawn to monsters and aliens and spaceships.”

The longtime local artist has written other children’s books through his self-publishing label, Autumn Night Books, including “The House of Ichabod Strange” and “Bernie and The Deadbeats,” and most recently, “Faster Than Speed.” His latest children’s book, which released this month, follows the character Emberly (a kind of cat-inspired character) and his flurf, Fuzzball, on their quest to save their village.

Mackey, whose day job is as a graphic designer at Minnesota State University, began the project in August 2020 — he knew he needed a big project to commit to during a time where he had been going through a dry creative period.

It’s not the first time Mackey found himself in a creative rut — in 2019 Mackey began a ‘zine titled “CRAP!” but it fizzled out with the pandemic.

“I couldn’t distribute it anymore, so I wasn’t getting anything during that time. That was my creative thing, and when I stopped doing that, it really affected my mood — I knew I needed something to recover.”

The children’s book was his new creative and productive outlet, especially during the time of working from home.

“If there’s a week where I didn’t have the kids, I would go a week without speaking with another adult human being. Getting through periods like that it was good to have this one thing I would work on every day.”

So he began. Mackey set a deadline for himself to get the book ready to go to press by the beginning of April.

“The original draft was about defending a giant sandwich that (the character) found. But it kind of turned into (the final product) bit by bit.”

Mackey has an obsession for cats (though he only owns one right now) and developed the main character off the cats that have short legs.

“There’s the cats that don’t have the front legs and kind of hop around, it made me think of that,. I also wanted to make sure there wasn’t too much of a real animal because this isn’t earth — it’s just a weird little place.”

And for a children’s book, he wanted to make the main character cute but not too cute.

He’d finalized the story by last August and began working on his illustrations. “I spent the next four or five months painting. Every morning, I would at least do one hour a day — some days I would do more.”

Though a children’s book, Mackey said the book is for all ages with messages taken from his own life. The character Emberly wanted to get back to his village before the first frost. But being speedy doesn’t always work out as one plans. Mackey knows all too well of getting a job done fast doesn’t always mean getting it done right.

“Housework or home repairs, I’ll just quick throw something together and call it good — it looks like crap after a year.”

It still happens from time to time, he said, but he’s realized that taking extra time to get the job done right is important.

“It’s important to get the job done, but you also have to pay attention to the details,” Mackey said. “The main character, if he’d taken the time to help the preacher in the first place, he could have got to town and he would have made it back in time. … There’s also the message that if you take the time to think about others then other people will help you in the end — you’re not alone.”

The book started off in a completely different direction than the final product. But Mackey knew from the beginning that the book’s profits would be a benefit for the ECHO Food Shelf.

His illustrations for the book are now on exhibit at the 410 Project until June 20. The paintings are being auctioned and proceeds benefit the ECHO Food Shelf — a place he always wanted to give back to.

“When my kids were younger, I was going through some financial hard times and I used the food shelf several times. Every time I did, I was always so grateful and I always knew someday I wanted to pay them back for it.”main story

What: "Faster Than Speed" exhibit, paintings by James Mackey

When: Reception is 7 p.m. Friday; exhibit runs through June 20

Bids for James Mackey's paintings also can be done online at jpmackey.com.