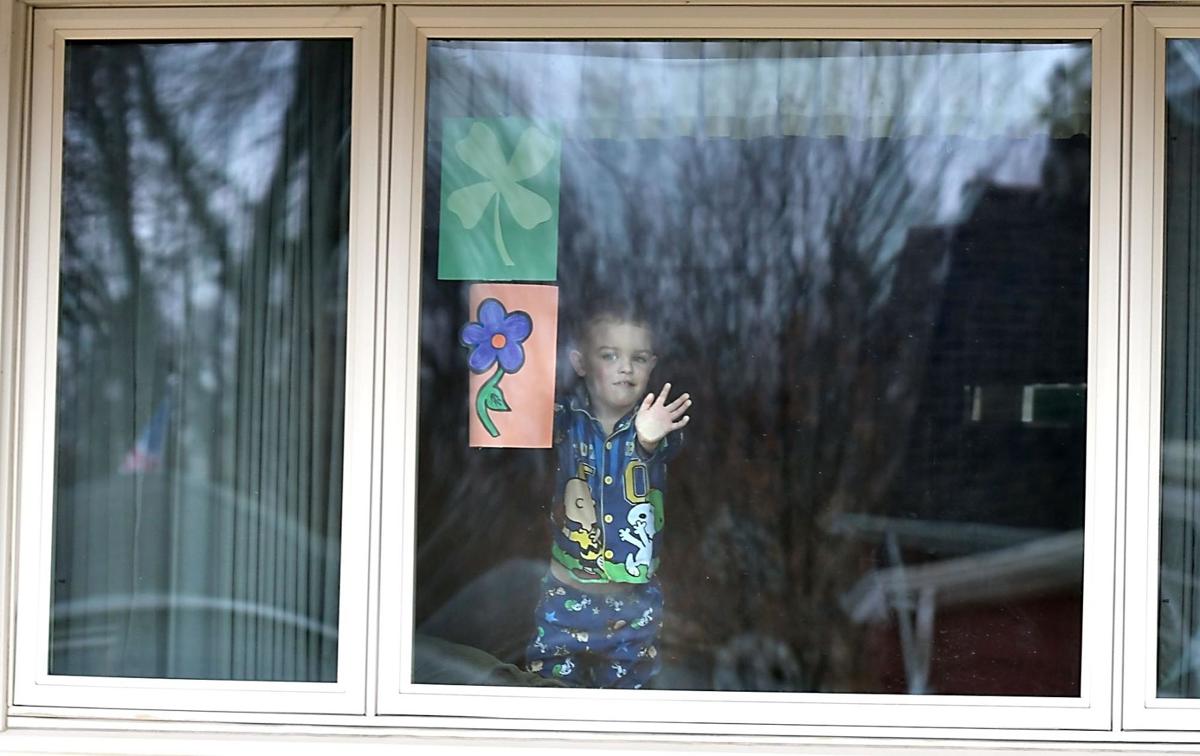 Henry Juliar, 4, waves to people following the directions in the sidewalk chalk drawings outside his Mankato home Tuesday. The chalked directions tell walkers to skip, jump and walk like a duck or an airplane. 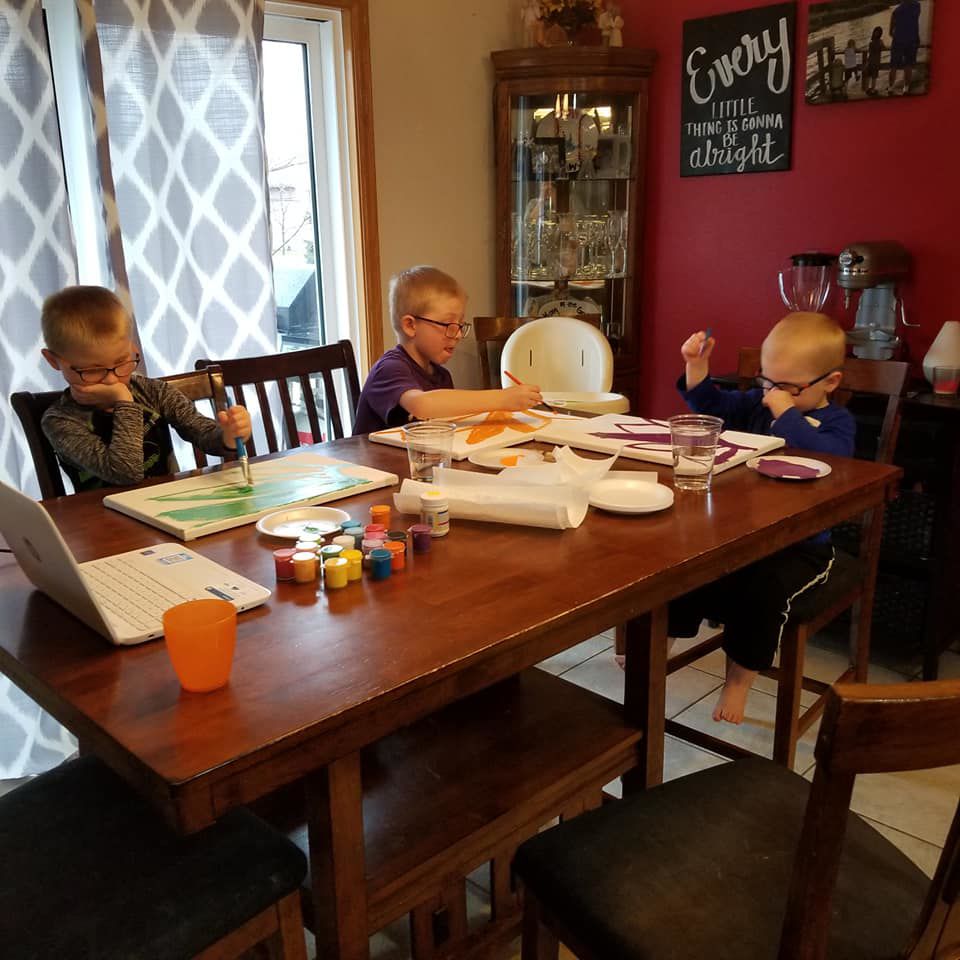 Jessica Thedens Christianson’s three boys at the table painting along with Design & Wine’s free painting videos. They are (from left) Wyatt, 7, Westin, 5, and Wylie 4.

Members of the VINE Memoir Group lined up to visit car-to-car Tuesday in the River Hills Mall parking lot. 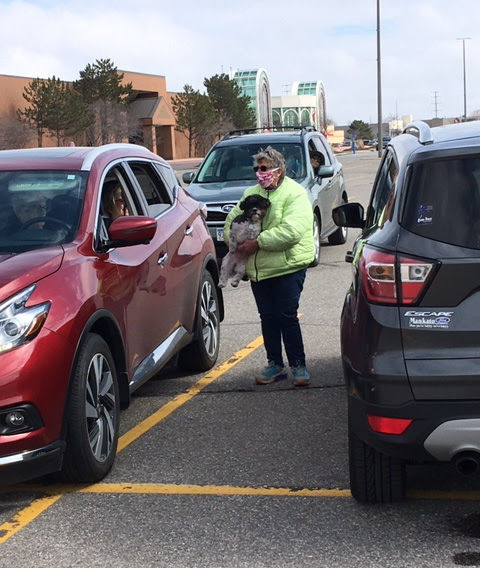 Linda Good, facilitator of VINE’s Memoir Group, takes her dog out while wearing her mask at the Tuesday’s “rendezvous” meet up at River Hills Mall parking lot.

Maddy Schultze and her daughter Daisy, 1, watch as her other daughter, Rosie, 4, follows directions in a chalk drawing and walks like an airplane Tuesday. Sidewalks featuring chalk drawings of everything from hopscotch to uplifting messages are popping up all over the area.

Henry Juliar, 4, waves to people following the directions in the sidewalk chalk drawings outside his Mankato home Tuesday. The chalked directions tell walkers to skip, jump and walk like a duck or an airplane.

Jessica Thedens Christianson’s three boys at the table painting along with Design & Wine’s free painting videos. They are (from left) Wyatt, 7, Westin, 5, and Wylie 4.

Members of the VINE Memoir Group lined up to visit car-to-car Tuesday in the River Hills Mall parking lot.

Linda Good, facilitator of VINE’s Memoir Group, takes her dog out while wearing her mask at the Tuesday’s “rendezvous” meet up at River Hills Mall parking lot.

There’s been a lot of adapting to do in recent days.

It began with schools extending their spring breaks and eventually moving to remote learning. And many people have taken their work home, juggling family life and office work.

Most have been cooped up, binge-watching Netflix shows while eating all their quarantine snacks.

One week has been more than enough for some, and they created their own events to be social — in a safe manner, of course. Because we’re humans, and for the most part, we like other humans. Connecting is important.

Angie Juliar found an idea through a Facebook mom group: a chalk activity. It’s something creative for her and her kids to do while being isolated at home.

Seeing the idea online, she asked her 4-year-old, Henry, if that was something he would be interested in.

Together, along with her other son, Olive, 6, they drew an interactive map on the sidewalk drawn with chalk.

Some of the activities include action words, such as “jump,” “skip” and even “walk like a duck” that encourage kids to do the action, whether on foot or scooter.

Just a couple of days ago, Henry called Angie. “‘Mom, there are people in groups taking pictures of the sidewalk!’” Juliar recalls.

“They just did it last night (Monday) and a lot of kids, and adults too, have been doing it. Even adults walking their dogs have been stopping,” Juliar said.

Thankfully, just a few weeks before, the family had stocked up on more chalk — a favorite pastime.

“It gives them more motivation to finish some chores or worksheets,” Juliar said “And Henry loves watching and waving to people. It’s fun for us this way, too, seeing other people enjoy it.”

Mid-Tuesday morning, seven cars from the VINE Memoir Group lined up opposite each other in front of the Barnes and Noble parking lot.

The group had been on a two-week hiatus from face-to-face interaction.

During that time, they continued communicating each week through email where they would check-in with the others and share their writing prompts. They were much like their usual weekly meetings — just virtual. Until Catherine Atchley, member for three years, decided to have a rendezvous.

“I’m just an idea person,” Atchley laughed. “I’m always coming up with themes to do something.”

About 11 members (and two dogs) showed up to the meet-up, lining up their cars and spending time with each and individual members — at a safe distance, of course. For many, including Atchley, the group had become like extended family.

“It was wonderful to see people,” Atchley said. “There’s nothing like seeing a smiling face in person.”

The members of the group understand the severity of the virus, especially since they’re considered to be some of the most vulnerable to it currently.

But having that human contact, even if it was six feet away, was important to those who showed up, Atchley said.

“It was a great way to connect, and two of the couples got scolded by their children,” Atchley said. “But we decided that the medicinal value, that it was so uplifting, that had to be good medicine.”

Linda Good, facilitator of the VINE Memoir Group, also made face masks for all of the members who showed up to the rendezvous. For those who couldn’t make it, she delivered it to their homes, including a 90-year-old member who is housebound.

“We have become more than just members, we have become extended family,” Good said. “We take care of each other and check in.”

Good adds that since most of the members are seniors, they’re a risky group during the virus pandemic. However, even a small amount of contact once a week (at a safe distance) was important.

“It was one way that we can be in contact, besides our emails,” Good said. “To see each other and seeing everybody still smiling.”

Even with some concern, like the children of some of the members, Good and Atchley said they were being safe. They were wearing masks and stayed inside their cars (except for when Good had to take her dog out for a second), rotating every so often to talk to the next car.

“It was a unique experience. We were being safe and we could still see each other,” Good said.

Atchley hopes that everyone stays safe and sane during this time.

“Try creative ways to connect with people that you care about,” Atchley said. “Who knows, you might end up with your own rendezvous somewhere.”

The last few days have been a whirlwind of emotions for Laura Doyen, owner and founder of Design & Wine in lower North Mankato.

“I thought we had to close our doors. It’s been a rough 24 hours,” Doyen said. “I feel like we have worked so hard to be where we are. The coronavirus wasn’t going to be the reason that we weren’t supplying art to people.”

Last week, Doyen had set up her first virtual painting tutorial — a sunflower. Each week, she will continue to post videos to a private group (which anyone can request to be added) where people at home can join in painting with her live. She will also keep the live recording up for seven days for others to join in at their convenience.

There is also no fee to join in on the class. Doyen sets up a list of supplies each person will need to purchase at local hobby stores, but the classes remain free.

“We’re using a lot of our original artwork from five years ago that so many people have used,” Doyen said. “We’re just going to teach that because it’s so important for the kids, and it’s such a great way for parents to connect with kids.”

The class that took place last week had 58 participants, including 11 households that joined her live. Many families have posted in the group thanking Design & Wine for helping entertain their families.

“Thanks Design and Wine for helping entertain my girls and I during this challenging time,” one group member said.

Jessica Christianson of Mankato added that it helped take stress off her and her four boys.

“The class was awesome and perfect for my kids to follow. We were able to go at our pace and create something and get our minds off the stress of what is happening,” Christianson said. “It helped me as a busy mom of four (to) have my kids engage in something interactive, fun and educational.”

Others posted their own sunflowers, with their kids holding their canvas.

“A couple of moms have said it was a good outlet for them and their kids,” Doyen said. “They were stressed out, and it was calming.”

Art at any time is vital as a creative outlet. It’s especially important now, since most have been isolated for a couple of weeks.

“You wake up with so many unknowns, and just getting into that art, and losing yourself in a project and seeing the final product, that you did that,” Doyen said. “I think it’s very satisfying for people. Art in general is a healthy thing for your mind and soul.”

“We’re always open to receiving those requests because really, without them and with what they want, we wouldn’t be a business,” Doyen said.

Pat Christman contributed to this story.