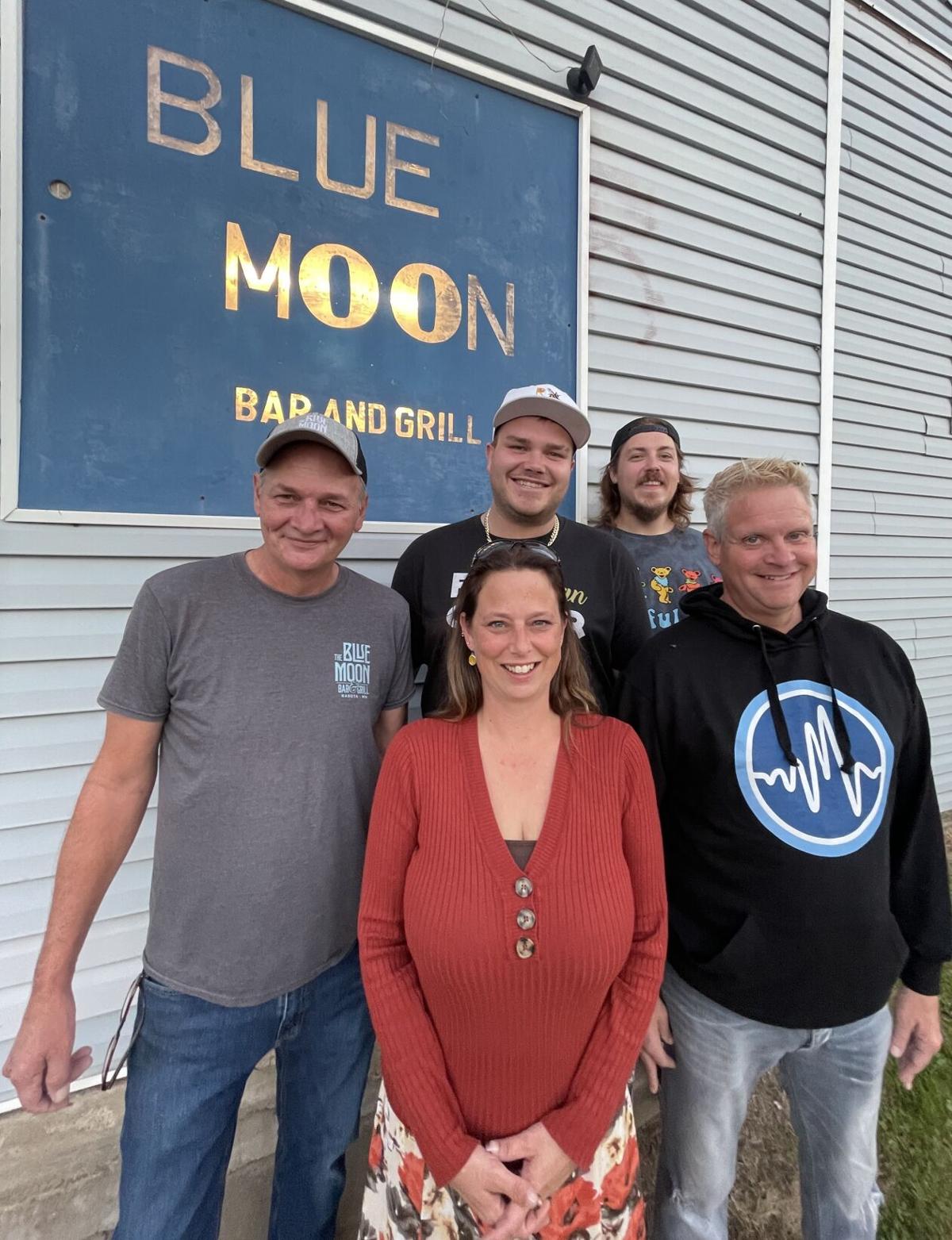 Many have rallied around 9-year-old Fritz Urban, who is battling cancer. Among them are (from left) Bret Haslip, Melony Haslip, Andy Beltz, Chris Bertrand and Kevin Mock. 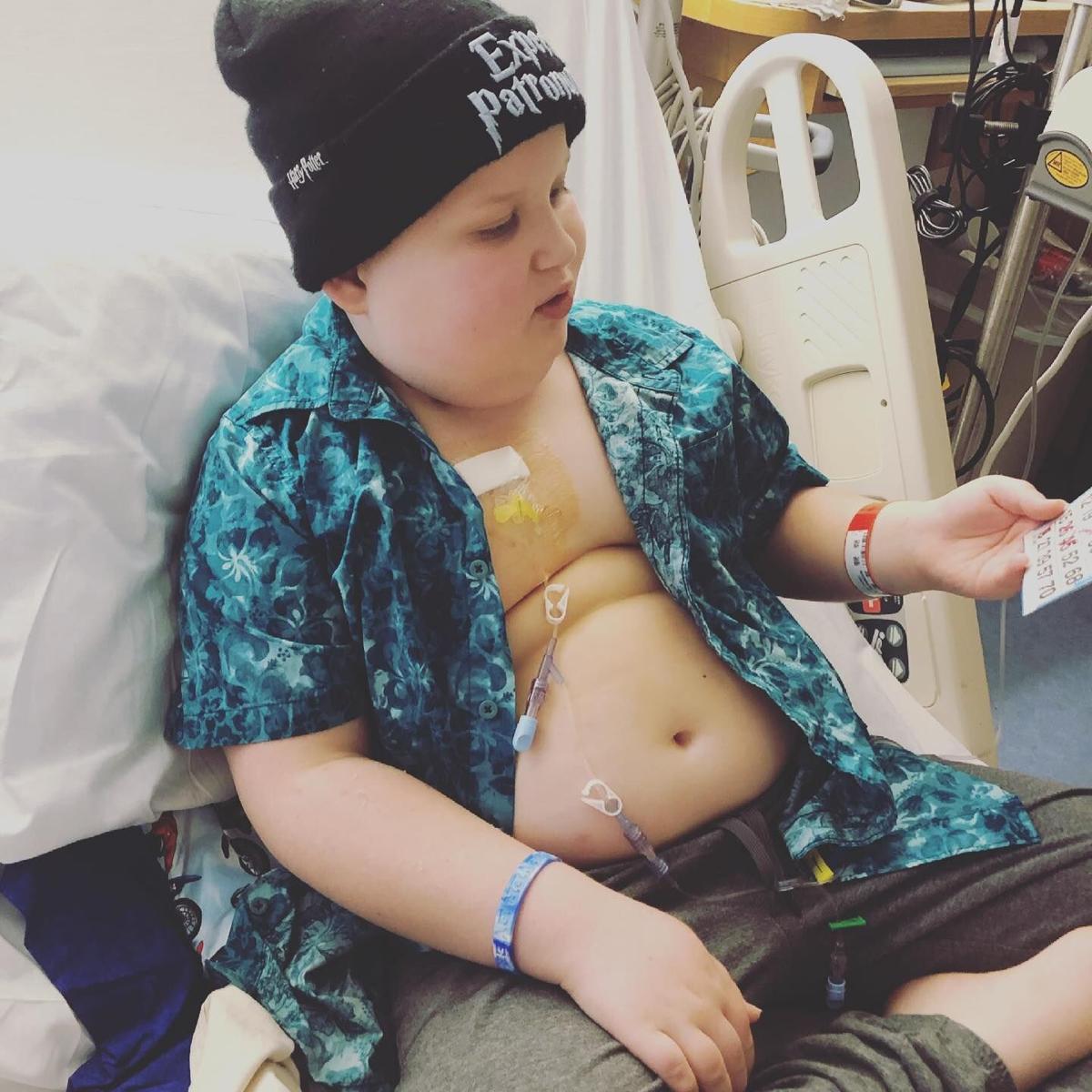 Fritz Urban went to the dentist when his mother spotted an odd swelling inside his mouth. Before long, he was in Rochester where diagnosing him with cancer. 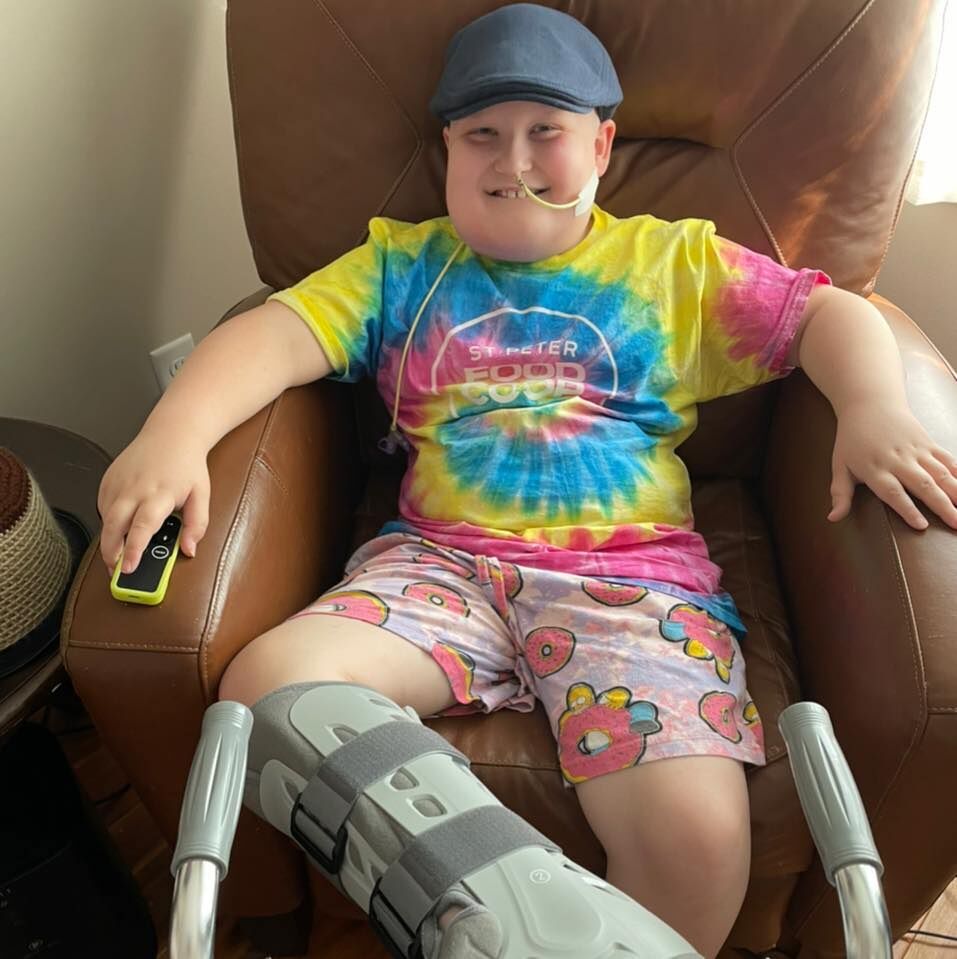 Fritz is undergoing chemotherapy. The Fritz Fest benefit will help the family with costs associated with Fritz’s care.

Many have rallied around 9-year-old Fritz Urban, who is battling cancer. Among them are (from left) Bret Haslip, Melony Haslip, Andy Beltz, Chris Bertrand and Kevin Mock.

Fritz Urban went to the dentist when his mother spotted an odd swelling inside his mouth. Before long, he was in Rochester where diagnosing him with cancer.

Fritz is undergoing chemotherapy. The Fritz Fest benefit will help the family with costs associated with Fritz’s care.

Fritz Urban, an upbeat 9-year-old St. Peter fourth grader, is in the fight of his young life.

Diagnosed March 25 with Ewing sarcoma, Fritz has spent the bulk of his time since then in treatment at Mayo Clinic in Rochester.

Fritz’s dad, Joe, who is an employee of South Central College’s IT department and the family’s health insurance connection, has held down the home front with his job and Fritz’s three older siblings. Mom, Erika, a certified professional midwife and owner of River Valley Birth Center, set aside her paid work that fateful late-March day to accompany Fritz on his bumpy cancer journey.

But once in a blue moon, caring hearts and giving hands step in to help.

Enter FritzFest 2021, the brainchild of Bret and Melony Haslip.

Upon learning of Fritz’s plight, and knowing the dozens of round trips to Rochester, countless meals on the run, mounting medical bills and Erika’s loss of income were taking a toll on the family’s finances, the Haslips hatched a plan for a fall fundraiser to assist the Urbans.

Now 20 years into her early childhood education career and now the child care director at River’s Edge Hospital in St. Peter, Melony Haslip met Fritz when he was a toddler attending the child care center where he was then enrolled.

“Every kid is memorable, but Fritz really touches your heart,” Haslip said. “Even as a toddler, he was so caring and compassionate — and my goodness, that child is funny.

“He’s not shy, and he had a contagious laugh.”

When a mutual friend alerted Haslip to Fritz’s diagnosis last April, she was moved to tears while sharing the difficult details with Bret, owner of the Blue Moon Bar & Grill in Kasota.

“Bret said, ‘FritzFest,’” said Haslip. “I said, ‘What are you talking about?’ and he answered, ‘Let’s do a benefit for Fritz.’”

Aided by a committee including Kevin Mock, Chris Bertrand and Andy Beltz, the group has assembled a full day of entertainment designed to delight people of all ages; from noon to 11:30 p.m. Saturday, the Blue Moon Bar & Grill will play host to FritzFest 2021.

“We have fantastic entertainment lined up and there’s lots for kids to do, so people can bring the whole family,” Haslip said.

Admission fees, which allows attendees to enjoy all five bands if desired, and all other proceeds from FritzFest 2021 will be given in full to the Urban family.

Mock and his fellow Blue Moon bartenders (Jasmine Esqueda, Matt Kennedy and Char Quist) have also pledged their “Tips for Fritz” that day.

“We’re a good team. It’s a great small-town bar with a nice patio, and we all said, ‘We’re in,’” said Mock, who previously joined with Beltz (emcee for FritzFest 2021) and Bertrand to mount Moon Fests at the bar.

Both Mock and Haslip are grateful for the generous support FritzFest 2021 has received to date.

Silent auction donations have come from St. Peter, Kasota, Mankato and the surrounding area, while Nielsen Blacktopping & Concrete and KRI (Kato Roofing) are sponsoring the stage.

Scott Biggs Barbecue is offering $1,000 worth of catering, and Doc E’s BBQ will donate its Saturday proceeds to the cause.

Organizers are high on the participating bands, which range from talented regional performers to rising country stars (Ben Johnson) to established, popular acts (Problem Child, which is scheduled to play 7:30-11:30 p.m. Saturday).

“A happenstance social media connection brought him to us, and we’re very blessed to have him come; we’re hoping a large contingent of his fans will show up.”

In the midst of the Urbans’ typically busy family life, Fritz mentioned having pain in his mouth and difficulty swallowing in late March.

“I looked in his mouth and saw a little swelling on one side,” Erika said. “I thought it was a weird infection and took him to the dentist.”

Initially suspecting an abscessed tooth, the dentist ordered an X-ray — and ended up seeing something he’d never seen before.

“We took him to the ER on March 24, and we were in Rochester by that night,” Erika said. “They did a biopsy the next morning.”

Since then, the longest period of time Fritz has spent away from Mayo has been three days. As of last week, Fritz has completed 11 of 14 chemotherapy cycles and has had nine blood transfusions.

“The treatment for bone tumors is super aggressive in order to improve outcomes,” Erika said.

“And the days in between his treatments are filled with lab work and blood transfusions — and he’s had complications (breathing problems, fever) after almost every cycle.”

In July, Fritz underwent a mandibulectomy and free flap reconstruction, meaning about three-fourths of his lower jaw was removed and replaced with the fibula of his right leg to create a new jaw bone.

“He spent two weeks in the hospital for that,” Erika said.

A necessary tracheostomy due to swelling created an unfortunate side effect: scar tissue formed in his trachea, resulting in the collapse of cartilage that keeps the trachea open.

“When he’s done with chemo (his 14th cycle is scheduled to be completed on Nov. 7), he’ll need a major surgery to take cartilage from his rib cage to rebuild his trachea, which means about two more weeks of hospitalization,” Erika said.

But the Urbans remain optimistic and grateful.

“Because Fritz’s cancer presented in his jaw, we saw it sooner and it didn’t have a chance to metastasize,” said Joe, explaining that Fritz’s five-year survival rate is therefore at a fairly high 70-80%.

“And all the doctors and medical staff have been great; they see Fritz as a person and not just as a patient.”

Added Erika, “I have absolute confidence Fritz has had the best possible care.

“It hasn’t felt difficult to make Fritz’s medical decisions because all his doctors want the same outcome for Fritz that we do; we haven’t felt the need to second guess any of the advice we’re being given.”

Mock and Haslip were motivated to mount FritzFest 2021 in part because of Fritz’s endless optimism and ongoing concern for others.

One example: Fritz enjoys assembling Lego kits prior to his chemo sessions, and when word of that got out, he received more.

Fritz also loves the activities for sick kids coordinated at Mayo by Child Life (think video games and bingo). When the Lego sets he received were piling up, Fritz suggested donating them to Child Life for other kids.

“It was a highlight for him, getting to wheel the cart of Legos around to give, knowing other kids would get the joy of receiving a new Lego set they could keep,” Erika said.

She and Joe marvel at Fritz’s persistent attitude of gratitude.

“Fritz is the most positive, joyful human I’ve ever met, and he’s been this way for years,” said Erika, recounting a recent drive to Rochester that included a quick stop at a Casey’s to grab pizza slices for lunch.

“A man offered to buy our pizza, which was sweet and unexpected, and Fritz told me afterwards, ‘Wow, I’m like a magnet for all the good things that could ever happen to a person.’

Fritz’s gift for considering others and their needs inspired Mock, who has previously helped with fundraisers for organizations such as United Way and Merely Players.

“You need to act,” Mock said. “It’s so hard to understand why this little boy (is struggling), and it was laid on our hearts.

“So we’re giving it our best — and what’s better than a benefit where you listen to music all day?”

The Urbans are deeply appreciative.

“It’s been really humbling,” said Joe, whose father and uncle died earlier this month. “‘Thank you’ doesn’t seem like enough to say for the support and love we’ve received from our community.”

Said Erika, “Having a sick kid is awful, and yet we’ve experienced love, generosity and kindness from others we never would have otherwise.”