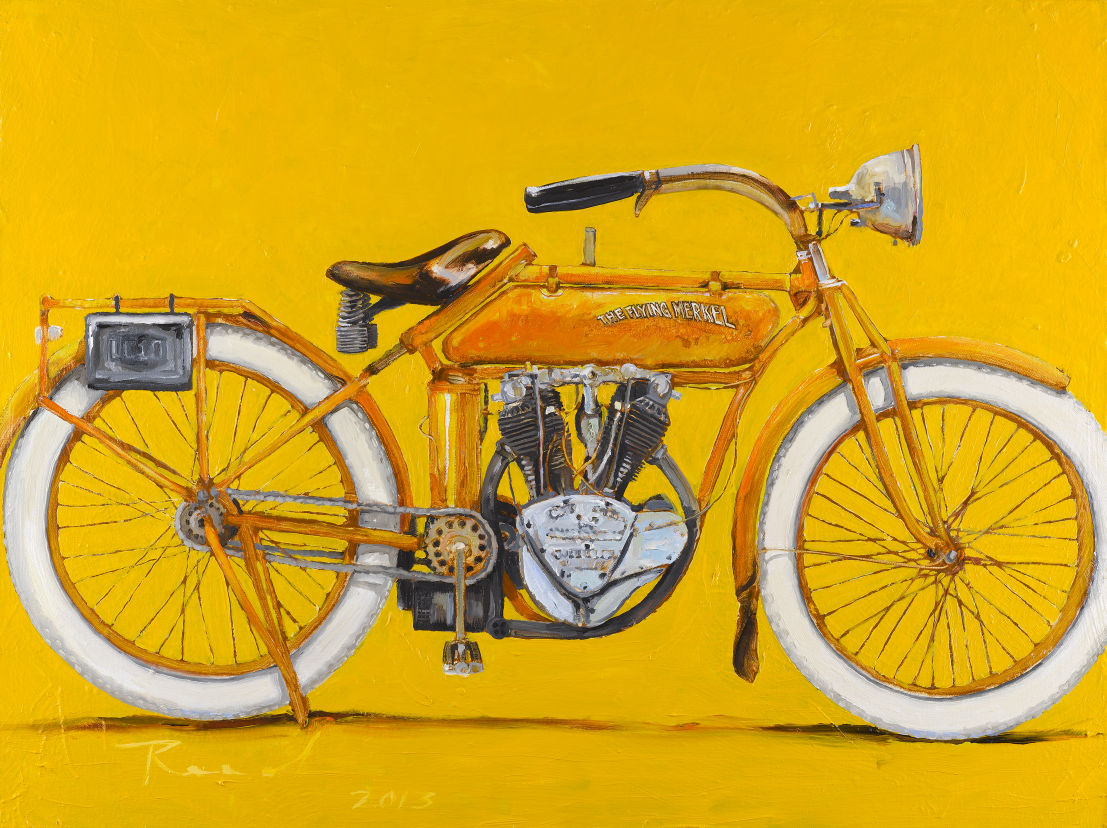 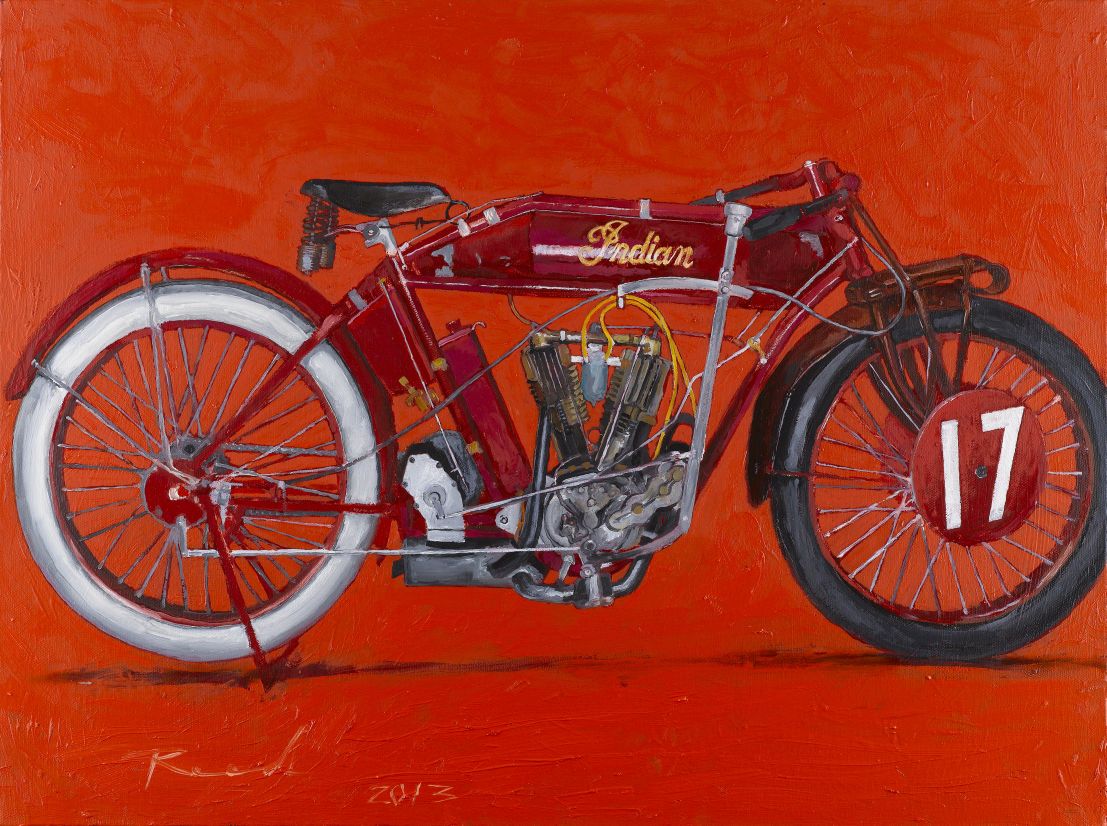 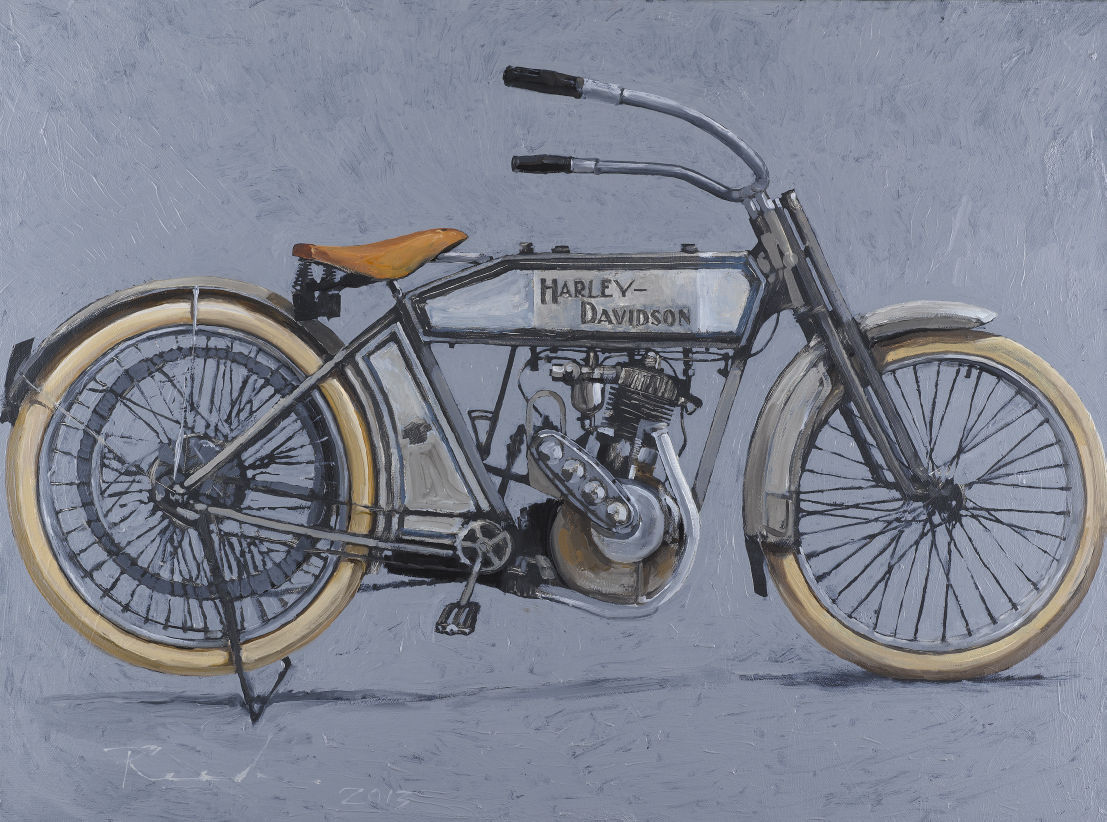 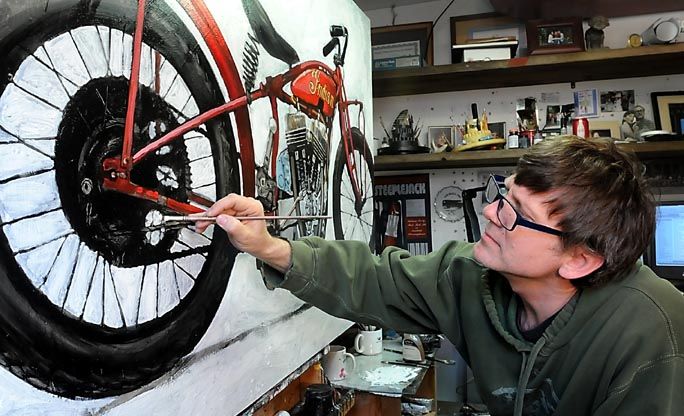 Reed White painting in the studio in his North Mankato home. After finding his niche painting vintage motorcycles, White has had several pieces included in museum exhibits. He's also started a Kickstarter campaign to make a series of color prints from three of his paintings,

Reed White painting in the studio in his North Mankato home. After finding his niche painting vintage motorcycles, White has had several pieces included in museum exhibits. He's also started a Kickstarter campaign to make a series of color prints from three of his paintings,

A 1947 Harley Davidson “knucklehead” motorcycle changed everything for Reed White.

The iconic machine is highly sought-after because it was the last year that Harley manufactured the distinctive knuckle-shaped valve covers.

White, however, isn’t as interested in owning one, restoring one or driving one — as he is in painting one.

During a career as a commercial artist and web developer, White has learned a variety of artistic styles and techniques. But nothing felt as gratifying as when he began painting vintage motorcycles a little more than a year ago.

Now, White has several paintings hanging in motorcycle museums in Ohio and Iowa, and he’s launched a Kickstarter campaign to create a series of prints based on his paintings (see accompanying story).

“Half of art is figuring out what you want to paint,” he said. “I could paint motorcycles until I die and never get bored.”

To be sure, White’s talent isn’t confined only to motorcycles.

His career began as a cartoonist and art director for the University of Minnesota campus newspaper. He then worked as a freelance illustrator, designing storyboards for companies like BMW, Arctic Cat, Coca-Cola, Holiday Inn and Northwest Airlines. A flash animation he designed aired on MTV and he’s won multiple awards for his designs.

Along the way, White had been encouraged to paint by family and friends. But he never found himself particularly inspired. That is, until he was compelled to create a piece of art as a gift to a friend.

Spurred on by hearing his wife tell someone that she wished he would paint, White asked his friend, an avid motorcycle historian, to give him a photo of his 1947 Harley Davidson knucklehead.

With that, White began painting.

“I imagined a little 8-by-11 of me sitting on my motorcycle,” said Jon Louis, the friend who received White’s first motorcycle piece — which actually measured closer to 3-feet-by-4-feet. “When I saw it, I was absolutely astounded. I said, ‘You could make a living doing this.’”

To prove the point, Louis took White to the Antique Motorcycle Club of America swap meet in Davenport, Iowa, hailed as one of the largest in the world. White set up a live painting booth, and was an immediate hit.

Not long after, White was approached about providing a trio of paintings for an upcoming exhibit at the American Motorcyclist Association Hall of Fame Museum in Pickerington, Ohio. He also provided a pair of paintings for the National Motorcycle Museum in Anamosa, Iowa.

In addition, White displays his paintings at Wheels Unlimited in North Mankato. Chad Pasbrig, who owns the Harley-Davidson dealer, said the highly detailed and richly colored paintings “fit in with the decor” and have even attracted a few buyers.

Such swift attention has caught the otherwise low-profile White off-guard. He said he enjoys a certain amount of anonymity as an artist and has always been somewhat hesitant to promote his own work.

Still, White said he’s been energized by the response.

“Everyone loves motorcycles — even people who don’t ride motorcycles,” said White, a burgeoning enthusiast himself who has a vintage Triumph as well as his very own rat bike to show for it. The latter won first prize at the Bearded Lady Motorcycle Freak Show, earning him a tattooed pig fetus in a glass jar as a trophy.

“They are a slice of Americana.”