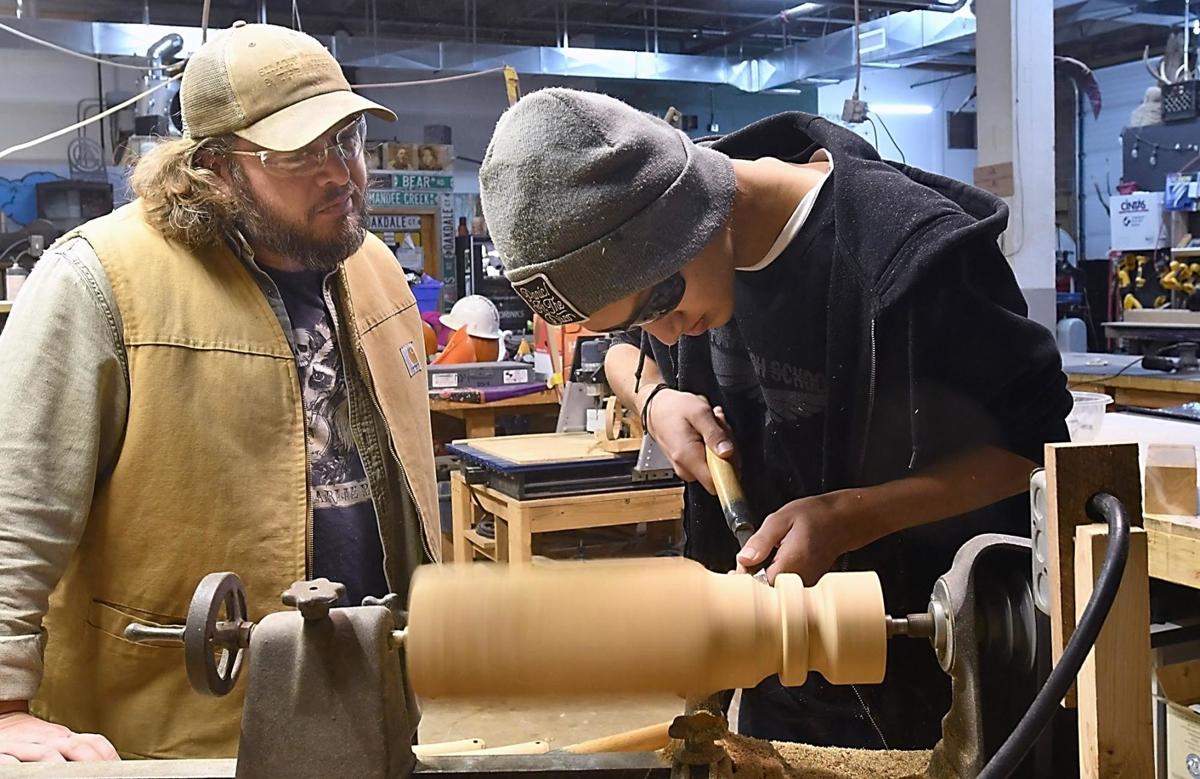 Rick Esser watches as Central High School student Clay Thonesavanh works on a lathe last year at the Mankato Makerspace. The Makerspace opened its doors back to members — with restrictions. 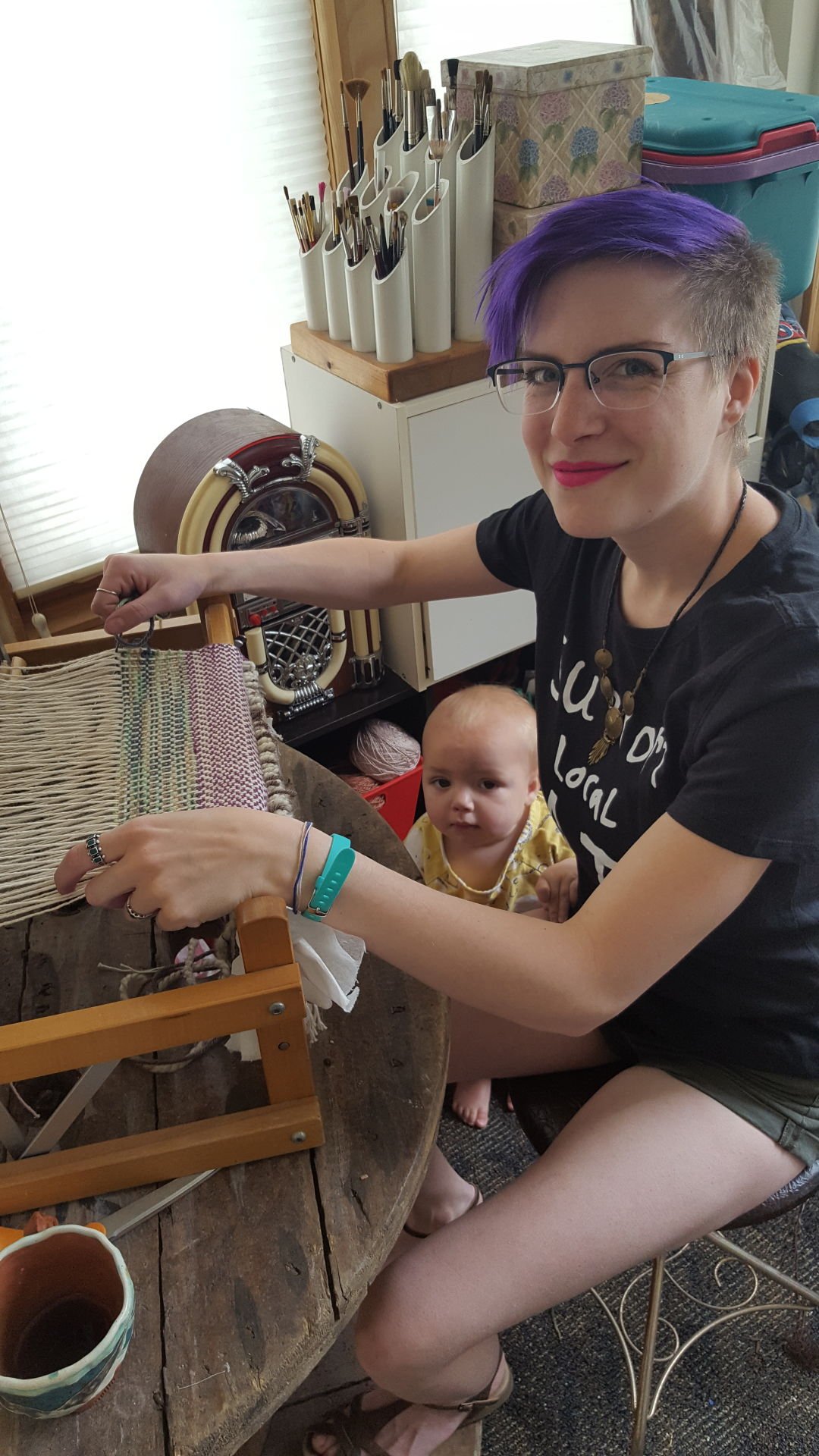 Rick Esser watches as Central High School student Clay Thonesavanh works on a lathe last year at the Mankato Makerspace. The Makerspace opened its doors back to members — with restrictions.

The Mankato Makerspace had closed its doors for two months as Minnesota dialed back on its social gatherings amid the COVID-19 pandemic.

Now, as the state slowly begins to reopen, Mankato Makerspace opens its doors to members — with some restrictions.

The Makerspace is open to members only working on projects for their businesses (such as indie shops) and those in construction, said Rick Esser, founder of the Makerspace. At any given time, the Makerspace is only allowed 10 people in the shop, including staff. Hours have also been reduced. They’re currently open from 2-8 p.m. Tuesday through Sunday.

Members are required to wear a mask at all times, and a new waiver must be signed. There will also be a check-in and check-out list in order to keep track of everyone in and out of the space.

“We want to make sure that everyone is safe and feels secure here,” Esser said.

With that in mind, the Makerspace also offers a hotline for members to call in to bring up a concern to the board.

Staff will be working to keep the space sanitized and members are required to clean the tools as soon as they are finished.

Though the Makerspace is only open for members currently, Esser encourages nonmembers to keep checking their Facebook page, @mankatomakerspace, or sign up for their newsletter for updates. Things are bound to change as the state adjusts regulations for businesses.

For those who aren’t members yet, there is always an opportunity to become one. It’s a good opportunity for anyone to get some hands-on mediation.

“You could just sit around, watching the news and playing with your phone, but it only causes distress on what’s going on in the world,” Esser said. “Just to get out of your head 20 minutes and create something ... You’re living in a different world.”

Help support the Mankato Makerspace by becoming a member or donating at mankatomakerspace.org.

The small-group classes conducted through Zoom allow students to experience the essence of the Arts Center.

“We focus on taking joy, and building basic skills,” said Ann Rosenquist Fee, the Arts Center’s executive director. “It is not make-and-take focused … The point of our classes is getting comfortable and enthralled with our process.”

The idea to go online began when the shelter-in-place order was set. Ronda Redmond’s class that focused on the book “The Artist’s Way” by Julia Cameron had to go through Zoom to finish off the sessions.

The class went smoothly, Fee said, and she believes that as the new normal sets in, people will be more willing to take online classes.

The consistency of that discipline goes further with these classes, Fee said. Having online classes and having instructors use the medium allows the Art Center to reach people who can’t make it to St. Peter. As an added plus, the classes makes them weatherproof as the year goes into the winter season.

Even though the classes can’t replicate the same experience as being hands-on with an instructor inside the Arts Center, it does provide a few bonuses for the instructors and students alike.

Instructors have the ability to have close-ups on their hands as they’re teaching a new technique — like with fiber art classes. It’s a different opportunity — and angle — for students to look at and learn from.

Facilitators of the class also are able to see and communicate and interact with participants differently. Redmond said that with the online classes, there’s another level of mindfulness that instructors need to take on. This includes noticing students’ body language via Zoom.

And it also gives the students, who may not be comfortable speaking up in physical classes, a chance to share their thoughts.

In Redmond’s Julia Cameron class — which initially started off with 24 students — she had seen students who were timid in class speak up more via Zoom.

“Somebody spontaneously shared one of his poems,” Redmond said. “I hadn’t seen him volunteer in that sort of thing.”

Additionally, Redmond said, the platform serves as a lifeline for those wanting and craving to be creative.

The Arts Center has continued a drop-in critique session for writers — now online — and the people who are using the session have needed that lifeline.

“Their soul needs it,” Redmond said.

In addition to the classes (which you can sign up on at artscentersp.org), Fee offers a drop-in online support group for artists. It serves almost as “office hours,” Fee said, in which she’s able to give feedback to artists in the community on their projects.

Though there’s no substitute for in-person meetings, this is the next best thing.

“I get a little dose of the creatives’ lives in the community once a week,” she said.

The online classes will all be in real time, meaning none will be recorded. People can feel free and comfortable while taking the class, whether to speak up or making mistakes.

The Arts Center will also provide equipment and materials for each class, which patrons can pick up with no-contact or have delivered.

Newcomers can expect instructors who are extremely eager to be back teaching, Redmond said. She hopes that people will take a chance to learn about something different and allow students to expand their knowledge.

These classes offer students a welcoming space to discover new genres that they might at once have been intimidated by (like poetry). Instructors are there to help dissect the art/process/technique. And Redmond said she hopes that once the class is over, students will take that knowledge and still feel a special moment long after the class is done. Maybe it’s a favorite phrase in a book, or a new technique in fiber arts or even insight on a stanza.

“It’s magical in that special moment to come to and it’s available for anybody who wants it,” she said.

The Arts Center is offering two poetry classes “The Rights of Writing with Jenn Wartman” and Syliva Plath’s “Ariel with Ronda Redmond. Nate LeBoutillier facilitates Writing Like a Reader: A 12-Week Course in Herman Melville. Other classes also include knitting, embroidery and weaving.