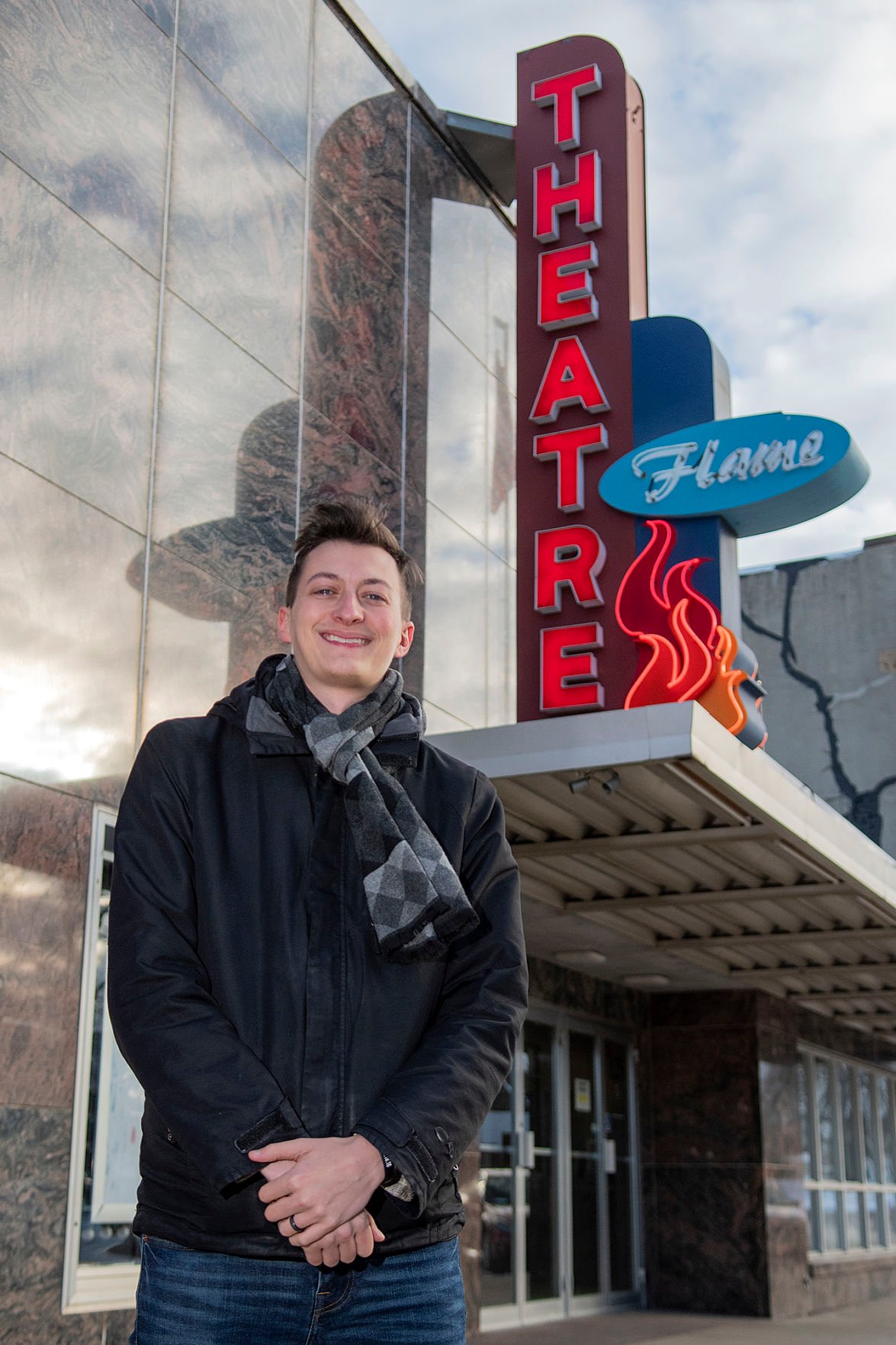 Cody Benjamin stands outside of the Flame Theater in Wells. Benjamin is releasing a book in March that people can pre-order about cinema in today’s society. The Flame Theater is mentioned in the book as Benjamin said it is “pretty rare” for a city to own and operate a movie theater. 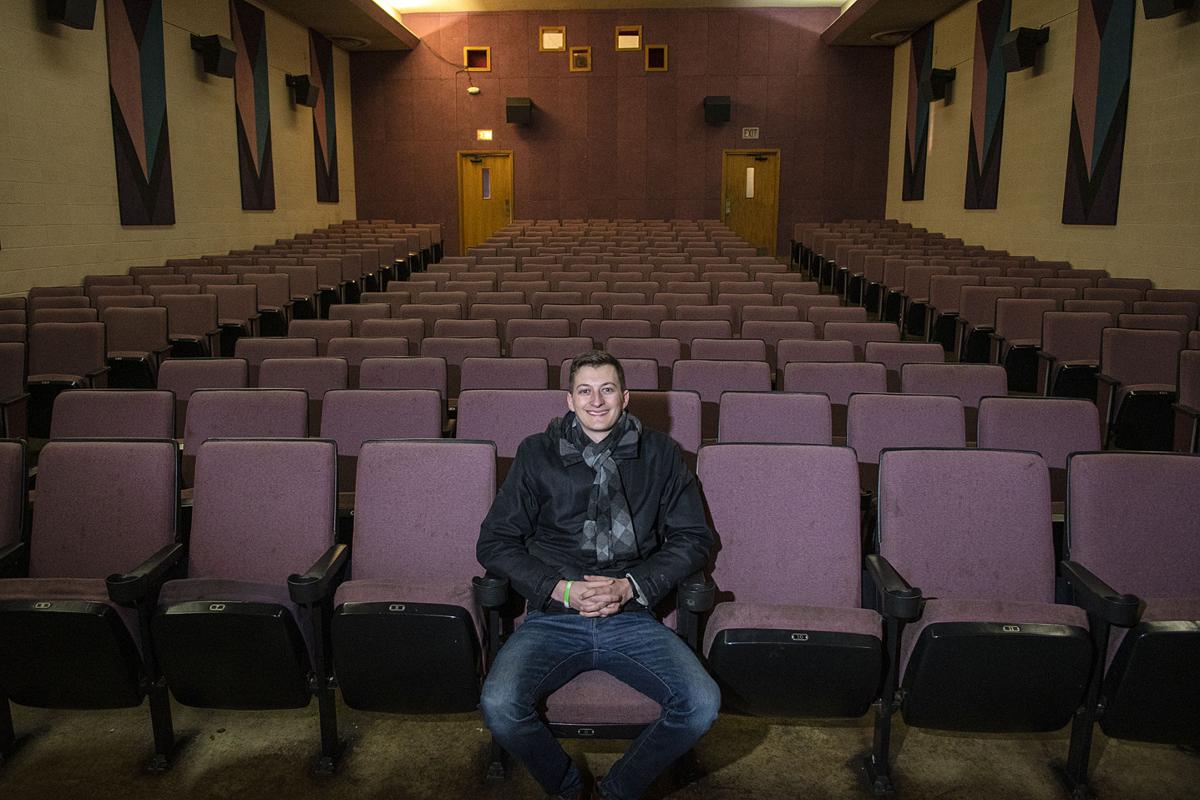 Cody Benjamin sits in the front row at the Flame Theater in Wells. Benjamin's book about cinema will be released in March. 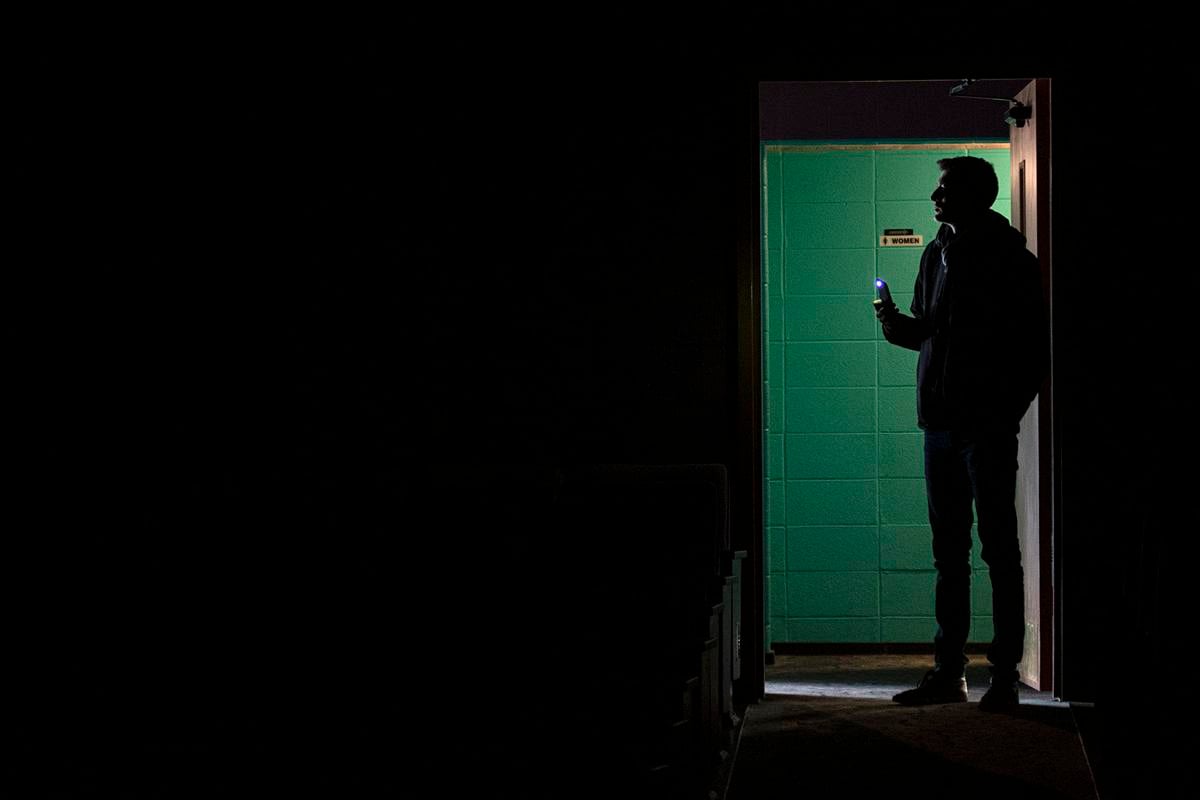 Cody Benjamin uses the flashlight on his cell phone to try to find lights at the Flame Theater in Wells. Benjamin’s book about the cinema takes a look at all kinds of movie theaters.

Cody Benjamin stands outside of the Flame Theater in Wells. Benjamin is releasing a book in March that people can pre-order about cinema in today’s society. The Flame Theater is mentioned in the book as Benjamin said it is “pretty rare” for a city to own and operate a movie theater.

Cody Benjamin sits in the front row at the Flame Theater in Wells. Benjamin's book about cinema will be released in March.

Cody Benjamin uses the flashlight on his cell phone to try to find lights at the Flame Theater in Wells. Benjamin’s book about the cinema takes a look at all kinds of movie theaters.

Cody Benjamin was the kind of kid who spent his childhood acting out his favorite movie scenes in the backyard, his head lost in the fantasy world he was discovering on the big screen.

“Indiana Jones became my go-to alter ego during playtime in the yard,” he writes in the introduction to his upcoming book about the theater industry. “(I cracked a rubber snake against the driveway to make up for the fact I didn’t own a bullwhip as a child.) Weekends became chances to direct my reluctant siblings in home-video renditions of ‘Star Wars,’ ‘Scooby Doo,’ or ‘Pirates of the Caribbean,’ complete with props gathered from around the house (a bandanna sufficed as an ascot for my portrayal of Fred, in ‘Scooby Doo’) or during vacation trips to the boardwalk (beach shops have no shortage of junky pirate gear!). Movies were both a safe and exciting place for me, a fountain of both inspiration and imagination.”

Benjamin along with college buddy and literary collaborator Chris Hayes have a new book coming out in a few weeks, “What About the Movies,” that analyzes and dissects various aspects of the film industry. Currently a writer for CBS Sports, Benjamin lives in Mankato with his wife, a physician assistant for Mayo Clinic Health System.

A journalism graduate of Indiana University of Pennsylvania, Benjamin worked for a bit at the Faribault County Register before taking a gig with CBS. But as a child he’d dreamt of a different line of work.

“Growing up, I had thoughts of wishing I’d worked for a movie theater to get free tickets,” he joked. “I’ve just always had a connection to movies.”

Benjamin said he and Hayes had brainstormed the idea for the book. Both grew up in a time prior to smartphones taking over the world, but both are also young enough to have been ushered into an age where such ubiquitous technology now seems natural.

This prompted them to ponder some of the biggest questions surrounding cinema, such as: Do the movies still matter? Are movie theaters immortal? Is theater an escape from other screens? Can going to the movies improve our health? Do the movies today have a place? Are movies too dependent on theme park content? Disney: friend or foe? And many more.

The book is a collection of essays on each topic. It’s the kind of collective work that doesn’t have to be read linearly or all at once, Benjamin says. Cinephiles can bounce around and read whichever sections appeal to them.

“What About the Movies” includes conversations with movie industry executives, including executives from Cinemark and AMC, which run the two major movie houses in Mankato. It also includes interviews with employees of the city-owned Flame Theater in Wells.

“There’s a section on city-owned cinema, basically because it’s pretty rare,” Benjamin said. “Their city manager was pretty up front in saying that, if it wasn’t city run, it probably wouldn’t be there.”

The book also examines the struggle, whether imagined or real, between streaming services such as Netflix or Amazon Prime and traditional movie theaters.

“A lot of theater owners are saying they don’t view streaming as competition,” Benjamin said. “They say people who stream more are also more likely to go to the theater. Their argument is that they don’t not like the theater, they just like content all the time.”

He said his research suggests most young people still like to go to the movies, even if they’ve got a stigma as a generation glued to their phone screens.

“With the whole ‘Can going to movies improve your health’ question,” he said, “going to movies used to be looked at as an escape. You’re forced to have a singular focus.”

Benjamin says he’s aware, though, that the lure of the device is strong.

“We’re still figuring out the impact all these devices have on our brains,” he said.

Moviegoers are routinely admonished to silence all devices prior to the start of a feature presentation. He says he’s OK with the moviehouse being a place of escape.

He also recognizes our society’s cultural march, and the moviehouse, despite today’s admonishments, may well surrender its grip on the device ban.

He’s not necessarily advocating for either approach. He’s merely raising the issue.

“I’m in an odd position of looking at that topic,” he said. “Is the future going to be where phones are allowed, or should we sit still and watch the movie?”

You can preorder “What About the Movies?” at codyjbenjamin.com/MovieBook.