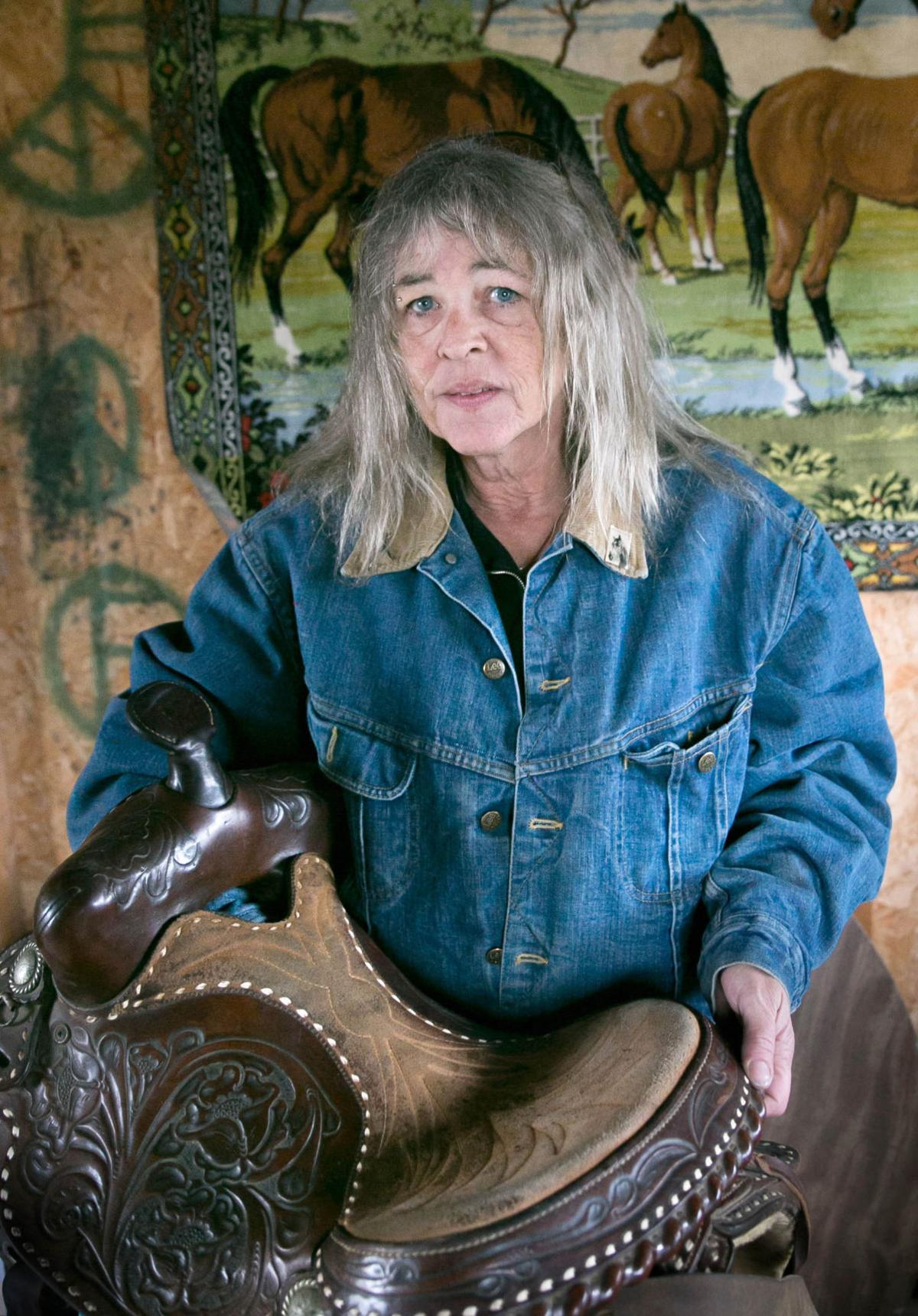 Jody Thisted moves around a saddle stored in the porch area of her home which is part of the Misfit Acres Horse Sanctuary in Amboy. Photo by Trevor Cokley 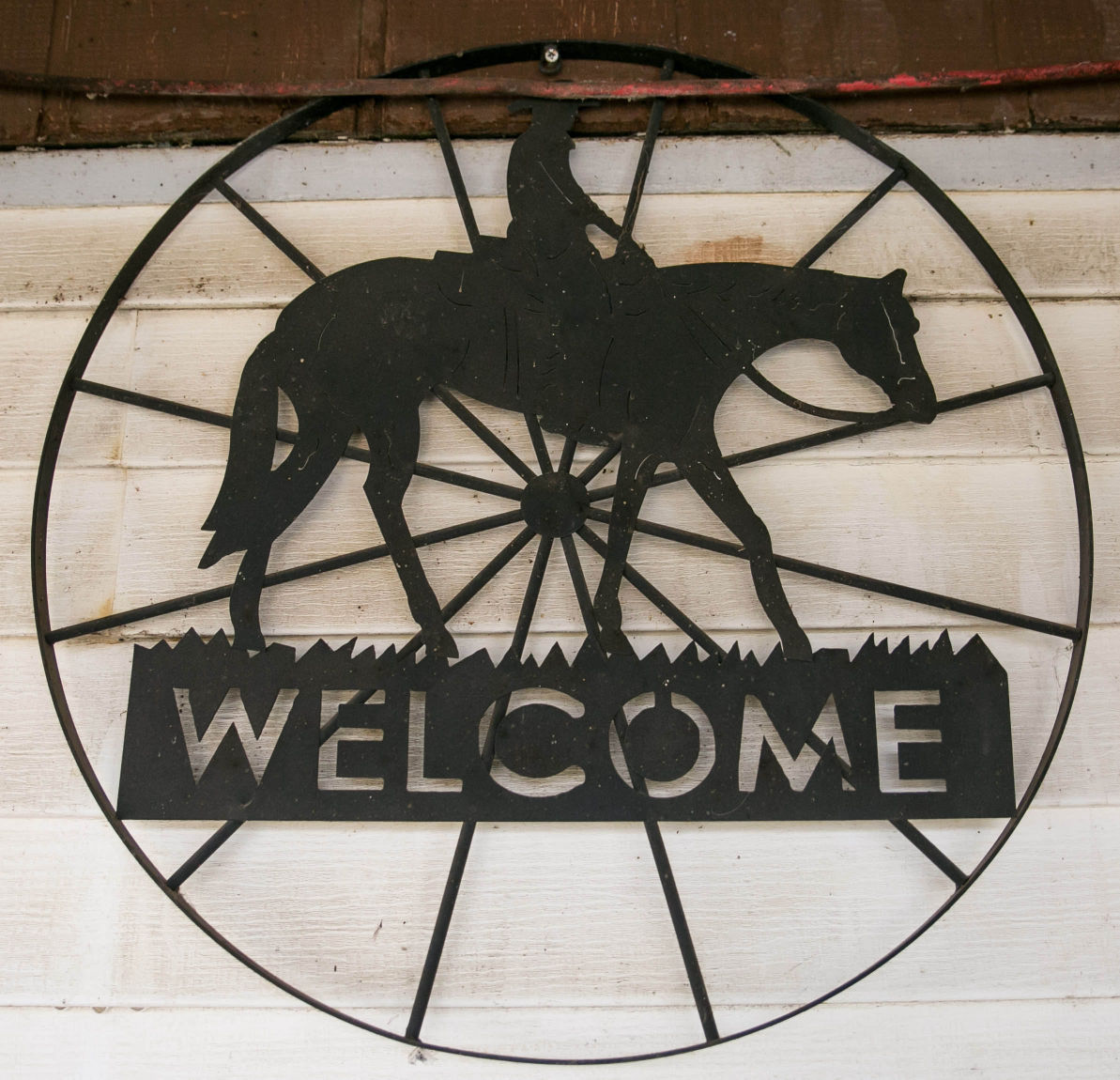 A welcoming decoration gifted by a friend greets visitors and horses to Jody Thisted's home at the Misfit Acres Horse Sanctuary in Amboy, the sanctuary was one of 52 winners from around the country to receive a $20,000 grant called "50 State for Good" given out annually by Tom's of Maine, a community giving program. Photo by Trevor Cokley

Owner Jody Thisted is greeted with a nudge and a lick Sunday after feeding treats to a couple of the ten horses sheltered at the Misfit Acres Horse Sanctuary in Amboy. Photo by Trevor Cokley

It was a Christmas classic, but as a child it always made Jody Thisted cry.

The Island of Misfit Toys, the sanctuary for defective and unwanted play things from the "Rudolph the Red-Nosed Reindeer" cartoon, never failed to bring tears to her eyes.

"I couldn't imagine not being wanted," she said.

And she couldn't imagine discarding a toy or childhood friend just because it had grown shabby or old.

A farm full of misfits

Of course, the horses at Misfit Acres are far from unwanted or unloved. Thisted cares for them all dearly.

Every morning, the Amboy woman sticks her head out the front door, yells out a greeting and waits for her small troop of horses to whinny in reply.

"You come out and you know who's going to holler first," Thisted said. "You know them by the sound of their voice."

Dreamer, a 28-year-old Morgan-Welsh cross with Cushing's disease, is usually the first to say "hello."

"She is the most person-orientated horse I've ever had," Thisted said.

Dreamer, whose pen is right outside the door to Thisted's house, will follow her owner along the fence when she walks outside. She always trots over to meet the postman, too, and begs to be pet whenever mail is delivered.

Because she has Cushing's disease, which is a dysfunction of the pituitary gland, she needs a special diet and gets sick easily. She also has bad teeth, and her feed needs to be soaked before she eats.

But she's a darling, Thisted said, and is a happy ol' horse, despite her health problems.

Her pen is across the driveway from Lucky's, Misfit Acres' official mascot.

"Lucky's the one who started it all," Thisted said.

The story goes that Lucky was in the kill pen, waiting to be slaughtered, when a man bought her for his kids. When 8-year-old Lucky couldn't be trained as a children's horse, she was put up for sale once again.

At the time, Thisted just happened to be looking for a horse. She purchased Lucky, and after hearing the horse had been in a "kill pen," began doing research on horse slaughter and abuse.

Shocked at the number of unwanted horses in the U.S., Thisted bought a small farm outside of Amboy and proceeded to get actively involved in horse rescue. In 2004, she applied for and received nonprofit status, making her eligible for tax-deductable donations and grants.

This month, for instance, Misfit Acres was one of 52 winners from across the country in the seventh annual Tom's of Maine "50 States for Good" community giving program, and received $20,000 to help fund its operations.

“This year’s nonprofit recipients bring to life an inspiring picture of the care that Americans have for each other and their communities,” said Susan Dewhirst, goodness programs manager at Tom's of Maine, in a statement.

Tom’s of Maine is a natural products company focused on oral and personal care. For more than 45 years, it has invested in hundreds of nonprofit efforts by giving 10 percent of its profits back to organizations that support people and the planet.

Today, Misfit Acres provides a safe haven for 10 formerly "unlucky" horses, each of which will spend their remaining years on the property -- thus sparing them from abuse, neglect and potential slaughter.

Thisted also has a rescued doberman, and several cats who were deemed unadoptable due to temperament issues and now live in the sanctuary's barn.

(One of the cats is known on YouTube as Ralph - the Equestrian Kitty." He likes to hop up on ponies' backs for rides.)

Though in many ways running Misfit Acres is a full-time job, it's not the only thing Thisted does.

"I have to feed myself, too," she said, laughing a bit.

She works at Crawler Welding in Mankato, and takes care of the horses in her spare time. That means waking up at 4:30 every morning and feeding the horses, cats and dogs before heading off to work.

"When I get home from work it is kind of a mad scramble," she said.

Since several of the horses have different dietary needs, she needs to mix five kinds of feed every day. Some of the horses are fed three times a day. When one gets sick, it's a call to a vet and a night spent outside calming them. Even when healthy, most of the horses need special consideration.

My Sweet April, 26, is blind in one eye due to an injury as a baby. Said Thisted, "She doesn't have any trouble except for that."

Faith, Little Boy and Dixie are all ponies, which tend to have bad feet and can develop laminitis, which can be a crippling disease if their hooves aren't properly trimmed and cared for.

(Thisted has been afraid she would have to put Dixie down because of her hooves, but so far she's pulled through.)

Augie Doggy, the only horse born at Misfit Acres is now 18 years old. Thisted said she originally got Augie because she wanted to raise one little horse of her own, but unfortunately he has health problems of his own, and in the winter, swells up in reaction to the cold.

Magic, who pastures with him, has sight problems and depends on Augie to get around. Augie takes the responsibility seriously ... most of the time. Known for his ridiculous antics, he'll sometimes run off with Magic's feed pan.

Taking care of the horses is expensive and time consuming, especially considering their age and medical conditions. Each of them is expected to spend the rest of their lives at Misfit Acres, and are only put down if their quality of life deteriorates drastically.

"Once they come here, they stay here," Thisted said.

There's a few different reasons for that. For one, if Thisted sold one of the horses and things didn't work out with the new owner, chances are she might not have enough room to take them back. The farm's just too small for more than 10 horses at a time.

"Another reason is mama gets too attached to them," she said.

To help keep the horses in good health and to keep their pastures in good condition, Thisted depends on grants and donations.

The $20,000 grant from Tom's of Maine will help a lot, Thisted said, but probably won't last long. She plans on using the money to repair fences at the sanctuary, purchase feed and pay down her vet bills.

"That's not if something big happens," Thisted said.

It also doesn't account for sanctuary maintenance, not to mention the heartbreak Thisted goes through when she loses one of them.

"Everytime it happens, I'll say I won't take another horse," she said.

She always does though, even though it's sure to end in tragedy.

"I can't imagine not doing this," she said. "I cannot imagine looking out my window and not seeing horses ... if I won the lottery, this would be my full time job."

Misfit Acres is a nonprofit sanctuary and rescue which provides a permanent home where formerly"unlucky" horses can live out their remaining years safe from abuse and neglect.

To find our more or donate to the rescue, visit www.misfitacres.com or find "Misfit Acres" on Facebook.

According to the American Veterinary Medical Association: In 2005, the American Horse Council estimated there were 9.2 million horses in the United States. There are not reliable statistics on the total number of horses that become unwanted each year, though 90,000 to 140,000 horses have been sent to slaughter annually, and the total number of unwanted horses is estimated to be far greater than that.

Although there are numerous equine rescue facilities throughout the United States, these facilities do not have enough capacity or resources to accommodate all the unwanted horses.

The Unwanted Horse Coalition's 2009 survey revealed that 39 percent of rescues are at maximum capacity and another 30 percent are at near capacity. On average, rescues turn away 38 percent of horses brought to them.

Rescue, rehoming and euthanasia are preferable options for unwanted horses; unfortunately, there are more unwanted horses in the United States than can be accommodated by these options.

According to a UC Davis survey, when it came to transitioning horses back to private ownership only 26.2 percent of relinquished horses were able to be re-homed. Another option that owners have chosen to deal with their unwanted horses is humane slaughter.

With the closing of the equine slaughter plants in the United States, horse owners choosing slaughter as an option must arrange to have their horses shipped to either Canada or Mexico. Transport over these longer distances raises animal welfare concerns.