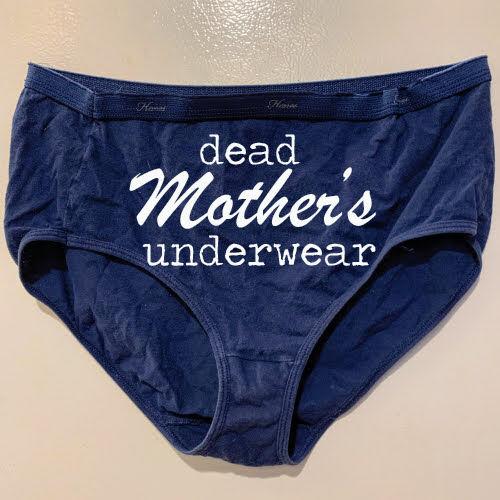 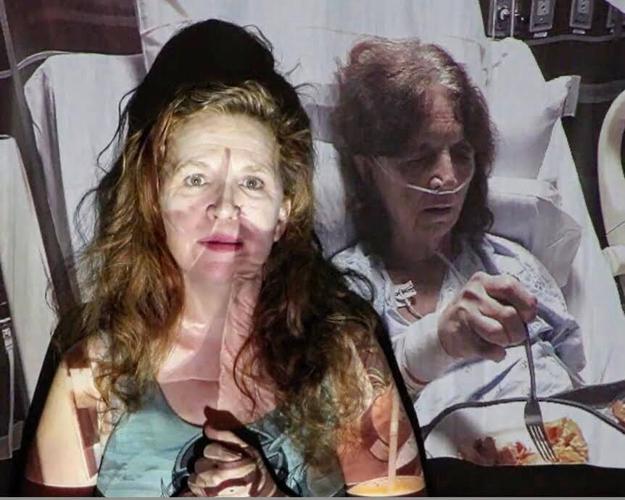 Jill Hildebrandt created “Dead Mother’s Underwear” as a way to deal with the pain of losing her mother and a to facilitate conversations about generational connections and the things we inherit from our parents, both good and bad. 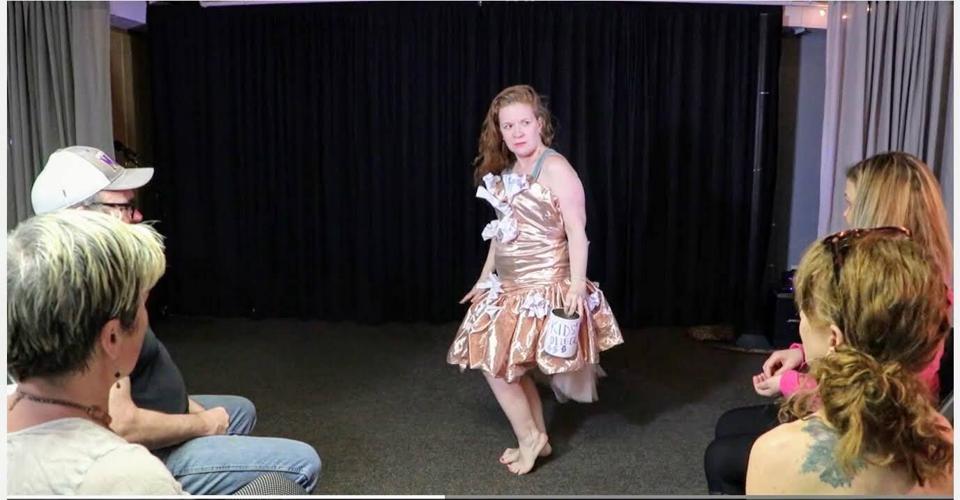 In this scene from “Dead Mother’s Underwear,” Hildebrandt accepts donations from the crowd for her children’s college fund. Her own student loan bills are stapled to her dress.

Jill Hildebrandt created “Dead Mother’s Underwear” as a way to deal with the pain of losing her mother and a to facilitate conversations about generational connections and the things we inherit from our parents, both good and bad.

In this scene from “Dead Mother’s Underwear,” Hildebrandt accepts donations from the crowd for her children’s college fund. Her own student loan bills are stapled to her dress.

When Jill Hildebrandt was going through tough times, her mother used to offer a simple prescription: Write about it.

That advice served her well for many years, helping her get through one tough time after another.

She found herself heeding the wisdom of that advice again just a few years ago. Only this wasn’t just another “tough time.” It was, metaphorically speaking, the mother of tough times.

When Hildebrandt’s mom, Kathryn Cullen, died of cancer in 2018, Hildebrandt was devastated. And as siblings went through mom’s belongings, they asked Jill if she wanted mom’s underwear. Sharing an fashion sense with her mom when it came to undergarments, she said yes. A few weeks later, that choice would provide inspiration.

“I was kind of in the throes of depression,” she recalled, “and my kids were at their dad’s. I woke up and it was like three in the morning and I couldn’t sleep and anxiety hit. And I went to the kitchen and I opened the fridge and this light cast over my body. And I looked down and I’m like, ‘Oh my God, I’m losing my mind. I’m in my dead mother’s underwear.’ The next day, I told my sister Gretchen this story and she’s like, ‘Dead mother’s underwear ... That sounds like a punk rock song.’ And then I started thinking about it and said, ‘Gosh, there’s something here.’”

That something turned into soul searching, which fired up her creative juices. She wrote poems, vignettes and scenes, all centered on the idea of generational connections, and coming to terms with the things — good and bad — we inherit from our parents.

That scene — with refrigerator glow cast upon her body — is included in Hildebrandt’s one-woman show called, obviously, “Dead Mother’s Underwear,” which includes the subheading, “Some inherit from their mother’s material possessions. Other’s inherit underwear, alcoholism, depression, dexterous toes, compassion, mad typing skills, and financial woes.” It debuts next week at the Minnesota Fringe Fest, and will be available for ticket buyers to view online. It will also be included at the Edinburgh Fringe, where it is also available to view online for free (tickets still required).

Hildebrandt’s achievement here is extraordinary. It’d be easy to call it simply “one woman’s hour of grieving,” but that would be a reductive and unhelpful assessment. This is an hour of plumbing the depths of despair, depression, pain, anger, resentment and heartache from a woman who, by her own admission, had her foundation shaken when she lost her mother.

Watching her navigate that pain is difficult at times. Thankfully, Hildebrandt understands this, and deftly uses comedy to blunt what can be some extremely raw emotions.

During one scene, Hildebrandt recalls being a child and waiting up until her parents came home drunk, then waits in fear at the top of a staircase to see if she’ll have to physically intervene, which she’s done before.

In another scene, she comically recounts a therapy session where, when assessing her anxiety and stress level, admits she’s, in the previous 12 months: lost her mother, lost her job, had a serious illness and suffered financial downfall. She can also check the “yes” box to questions such as “Anyone in your family had alcoholism, anxiety, depression?” “Do you suffer from feelings of worthlessness?” “Are you eating more?” “Have you stopped meeting with friends?” “Do you have thoughts of death or suicide?”

After answering “yes” to all, she turns to her therapist and says, “So, am I at risk?”

Hildebrandt, who grew up in Mountain Lake but currently lives in St. Peter, is no stranger to the stage. She’s also no stranger to one-woman shows. She did several of them during college. She says she likes the format because she has the most authority over the message.

“I think I have more agency doing it this way, especially if I’m writing my own piece,” she says. “I like picking my topic. And I love the challenge of holding an audience for an hour. I also enjoy connecting with an audience. There’s just something really powerful about that, and bringing my story to life. And I feel like in a one-woman show I also have the agency to really make it what I want.”

While “Dead Mother’s Underwear” is mostly a one-woman show, she get a little help along the way. Joe Tougas wrote and performed the music, and appeared on screen in a few scenes. Jen Tuder, Hildebrandt’s friend, is the director. And Ronda Redmond, who appeared on screen in several scenes, was one of the first to hear of — and encourage — Hildrebrandt’s project.

“What art does best for us is it helps us process, and get to the other side of, something painful. It helps us understand it, and to feel it, and to feel all of the things that you need to feel so that you can then move on,” Redmond says. “Her foundation was just ripped. Following the divorce, and then really leaning in on her mother for support, and then her being gone ... It sort of feels like Jill couldn’t have not written this story.”

Redmond said watching Hildebrandt through the filming process wasn’t easy either. She said it was clear the emotional issues dealt with in the show are still very much raw for Hildebrandt, and filming took longer than expected.

“She just emotionally couldn’t do any more in a day,” Redmond recalled. “You’d see her start to forget her lines, or she wasn’t delivering them the way you could tell she wanted to. And she just couldn’t keep going. And I think that’s because she’s up there feeling all of that. She’s not just delivering lines. It was hard. And it took time.”

Hildebrandt will perform the show live this fall at Minnesota State University.

Where to catch "Dead Mother's Underwear"

75% of profits go back to artist