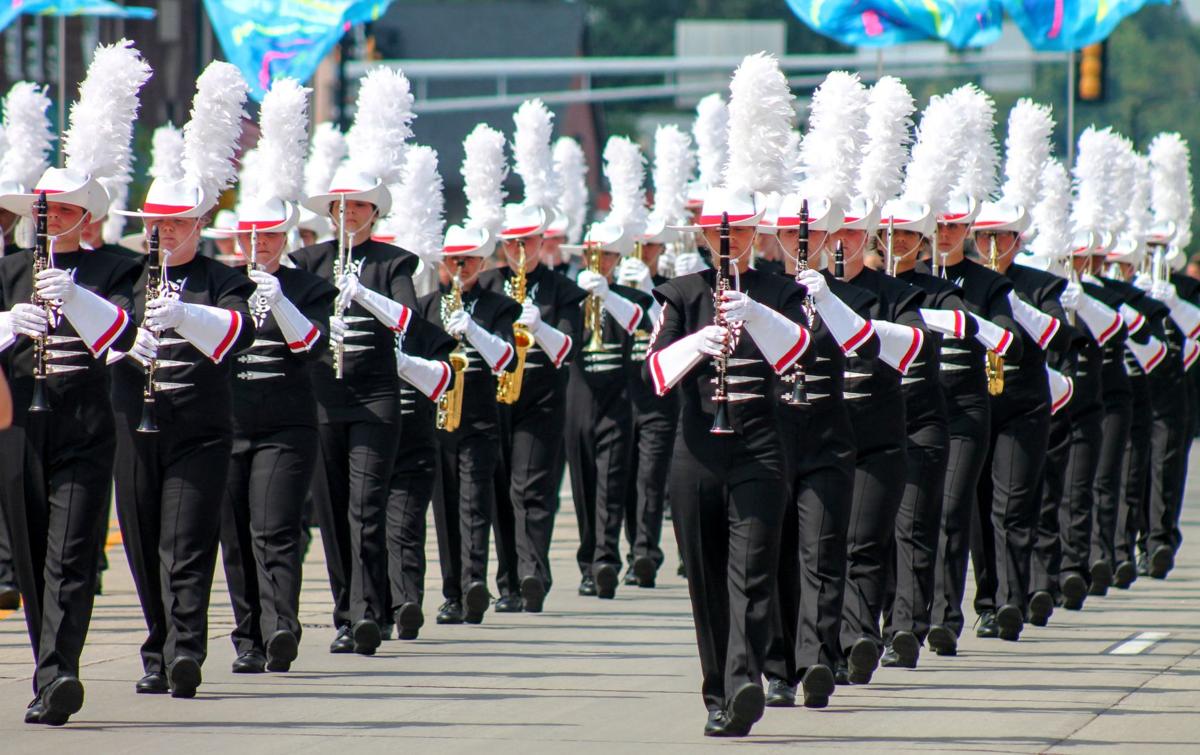 The Lancers are shown here two years ago in the Vikingland Band Festival in Alexandria. 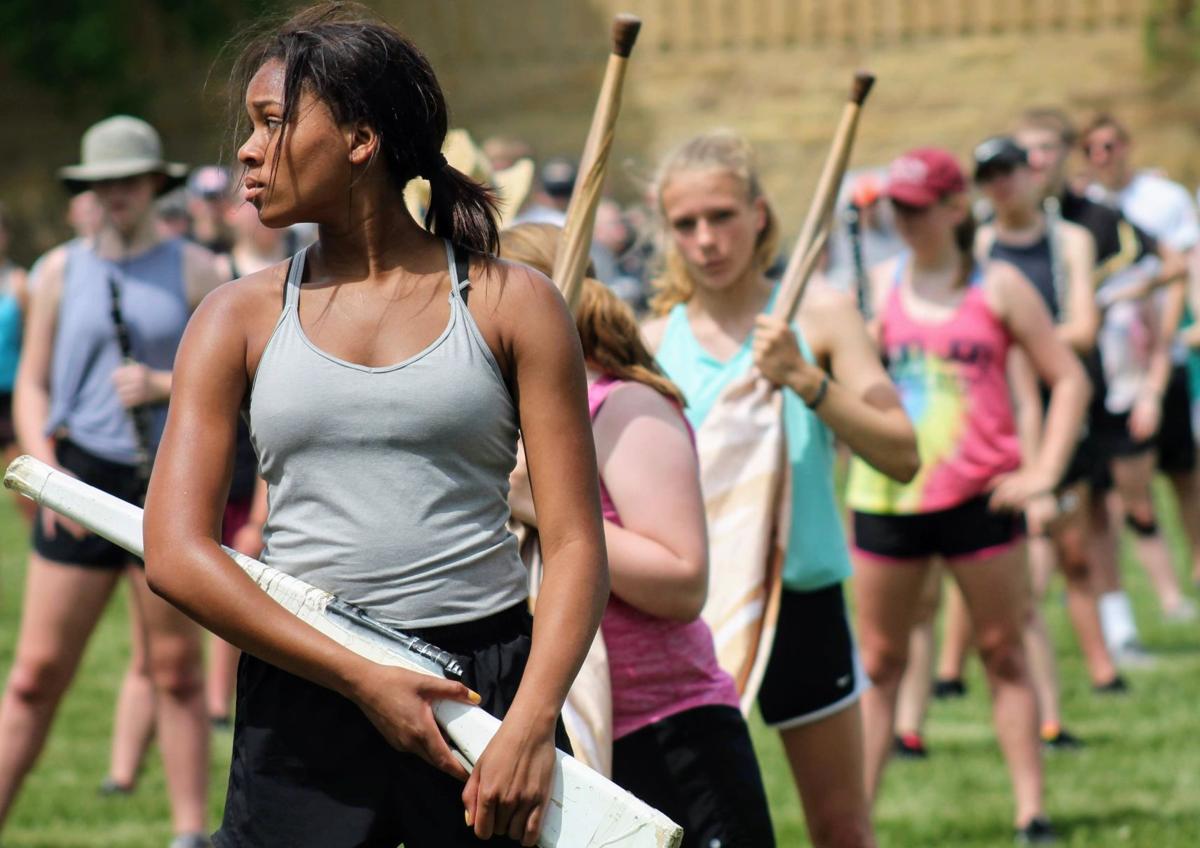 Tiana Johnson holds a rifle during a Spat Camp rehearsal from a few years ago. 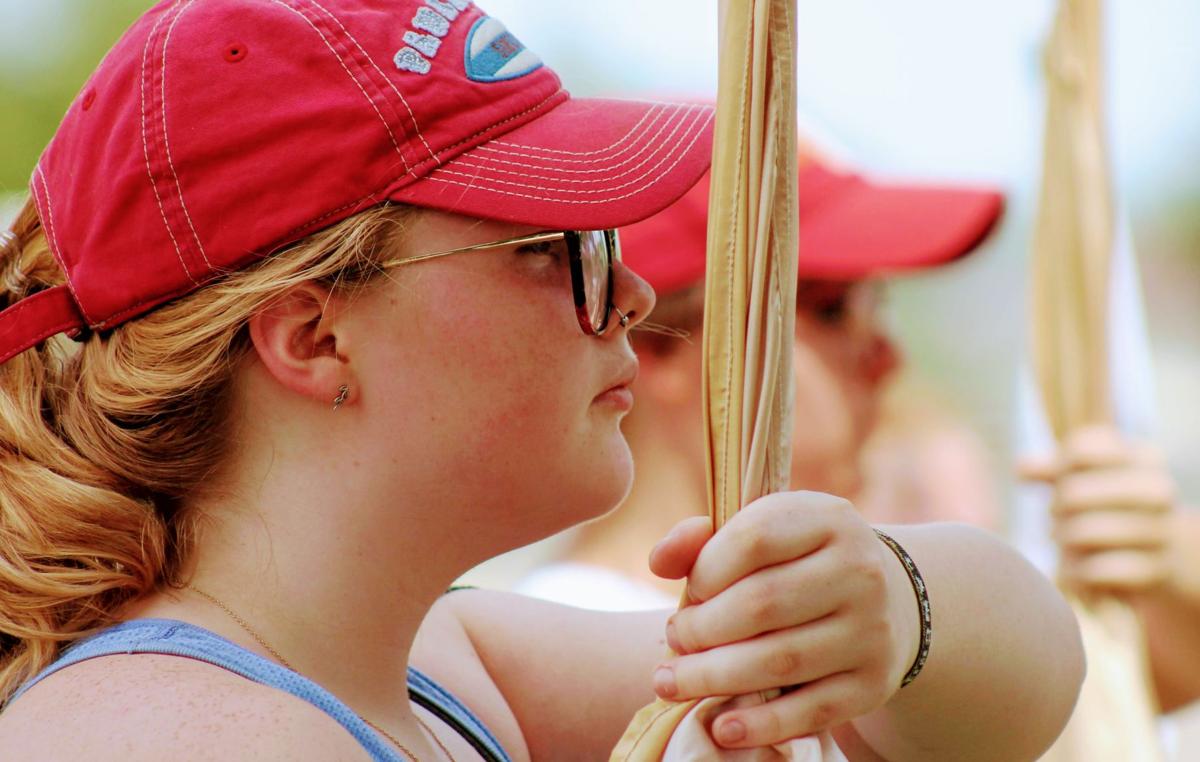 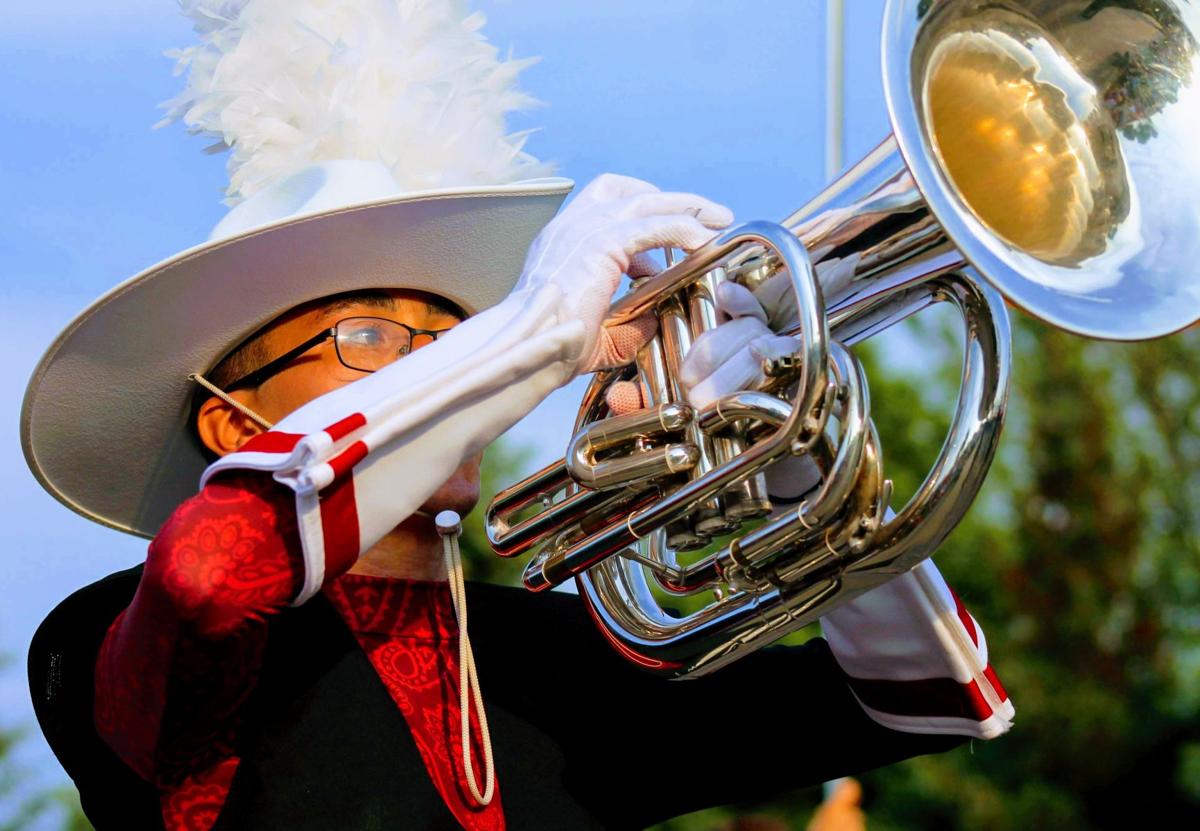 Lancer Justin Valdez is shown here marching in a parade. 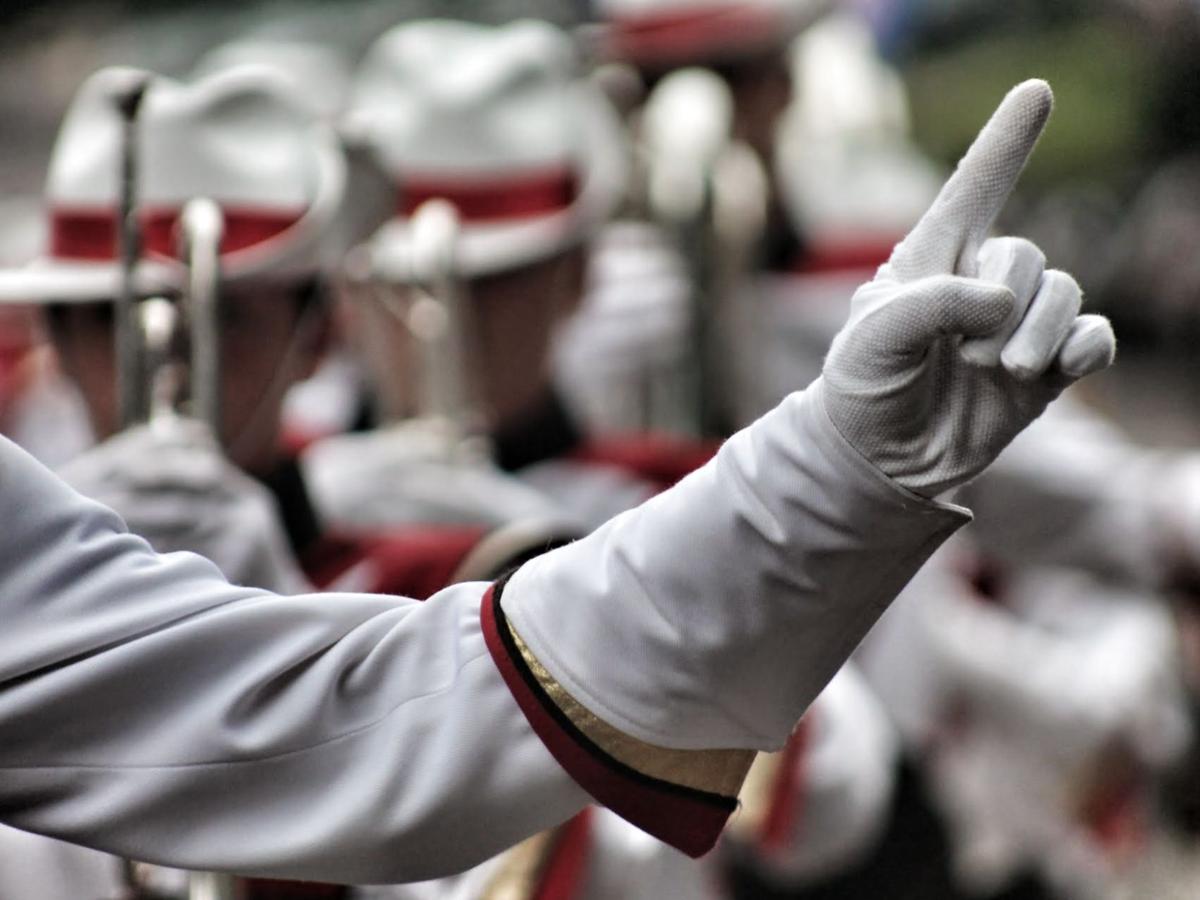 This image shows the Lancers old uniforms during the Owatonna parade.

The Lancers are shown here two years ago in the Vikingland Band Festival in Alexandria.

Tiana Johnson holds a rifle during a Spat Camp rehearsal from a few years ago.

Lancer Justin Valdez is shown here marching in a parade.

This image shows the Lancers old uniforms during the Owatonna parade.

It may be a stretch to call it “the day the music died.”

But for about a hundred Mankato-area teens who had already been gearing up for another season as 77 Lancers, the recent decision to cancel the season was a tough pill to swallow.

“For all the seniors, especially, it’s heartbreaking,” said Sarah Olsen, who would have been the junior drum major this year. “They’ve given so much to this family. It’s sad to hear they won’t be putting on the uniform again.”

So this summer will be the first in 41 years that Mankato won’t have a community youth marching band.

In a message to parents, co-director Justin Tollefson broke the news.

“I cannot describe the sense of loss I feel sitting here, writing this to you,” he wrote. “I know that many of you who have already received word feel the same. In accordance with (Mankato Community Education and Recreation), (Minnesota State High School League), Governor Walz, and a whole bunch of science, we regretfully must cancel our 2020 season. Though it is sad, we can be proud that we are upholding the long-standing Lancer traditions of integrity, unity, and consideration for those we love. The greater Mankato area has been our incredibly supportive home for these last 41 years, and we owe it to our families, friends, and neighbors to think communally in these unprecedented times.”

It didn’t come as a surprise. Dave Wilkie, president of the organization’s Parent Board, said they’d been warned by CER that, if Walz ordered schools to do distance learning, and if the MSHSL canceled spring sports, that the Lancers season likely would be canceled, as well.

So the focus for the group has now shifted from gearing up for a season of parade marching competitions to doing what they can to keep kids engaged. The last thing they want to do, Wilkie said, is lose momentum; their numbers are already trending downward. After several years of participation numbers around the 120 mark, last year they had less than 100. This year’s number was projected to be under 90.

And while this year will be a sad one for the seniors, the impact may actually be more profound on the rookies.

One of the Lancer hallmarks is something called “Spat Camp,” a grueling week of rehearsals where the members learn that year’s show. It’s difficult. But it also forms bonds among members, bonds that benefit the group in the long run. Ask any Lancer alumnus what their favorite memories are and they’re likely to mention the hours spent in the hot sun practicing a 10-second part of their show for three hours.

The 2020 rookies will not have that experience. Which means they won’t have a critical experience Wilkie believes helps keep them coming back.

“Spat Camp — that’s where you hook the kids and the parents,” Wilkie said. “My No.1 concern is keeping kids engaged, especially the rookies. We are working to support the staff to develop something online. Whether it’s marching or music. Justin and (co-director Will Frame) are putting together something. Retention is going to be a huge thing over the next few months. How do you retain them? If they didn’t have it for a year you don’t want them to say, ‘Huh, I can do without it.”

The Lancers organization had already been in a sort of transition period. To ease the financial burden, they scaled back on how ambitious their tour schedule is. Instead of a major trip every summer after the competitive part of their season is over, they’d switched to an every-other-year model. In the odd years, they’re planning scaled-back tours. For example, this summer they’d planned a trip to Wisconsin Dells. (Major tour destinations have included San Francisco, Hawaii, Calgary, Boston and Washington, D.C.)

In addition to spring sports being canceled, many of the competition parades have been canceling, as well, including Lake Crystal, Owatonna, Waconia and the big one, Alexandria, considered by participating bands to be the unofficial “state tournament” of parade marching. Without those venues, Lancers has no place to compete.

But Wilkie says he understands the situation and agrees with measures being taken to ensure everyone, especially the kids, are safe.

“It’s unimaginable that any organization in charge of kids right now is going to put them out in this environment,” he said.

“You’re always holding out hope that something magical was going to occur,” he said. “Our hearts go out to those kids and communities.”

Tyson Chiet last summer was voted president of the Lancer Student Board by his peers. He said they’re brainstorming ways to cobble together some kind of Lancer presence this summer. One idea they’ve come up with is a virtual talent show that band members can watch from their homes.

“And I’m still planning on having video calls with (other band members),” he said. “I want to make sure we’re all keeping up over the summer.”

Chiet, who would have marched as a senior this year, said he’s saddened that he won’t get to experience the exhilaration of marching in a parade again. But he says he’ll do everything in his power to encourage younger members to come back next year. So far, he says, it seems like that won’t be a problem.

“Everybody is super pumped about coming back,” he said. “People are upset, though, that they won’t get to be with their senior friends.”

For Olsen, one senior in particular was important to her, for practical reasons. In Lancers, the junior drum major usually learns most of what they need to know from the senior drum major, and it takes actual parades to iron out the kinks. That senior is Malachy Bloom. Olsen won’t have him to learn from this year.

“It is kind of stressful to think about not having that year of experience under your belt,” she said. “But I’ve seen adversity like this.”

She said she’s going to miss not having a calendar booked with Lancer rehearsals and parades from mid-May to mid-June.

“It’s hard to think about. I usually have a month and a half dedicated to Lancers and only Lancers,” she said. “It’s a family, and it’s going to be really hard. But we’ll get through it.”