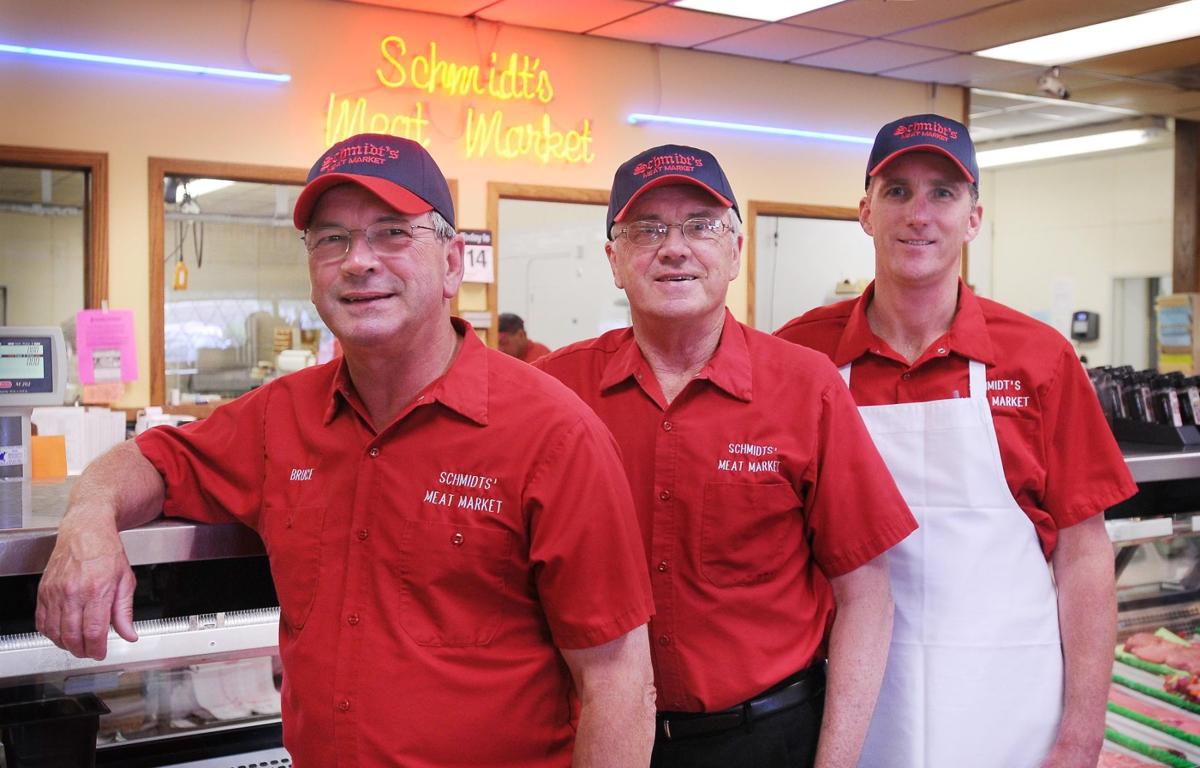 Schmidt’s has been a staple in downtown Nicollet for decades. Bruce (left), Gary and Ryan Schmidt are ready to serve their customers. 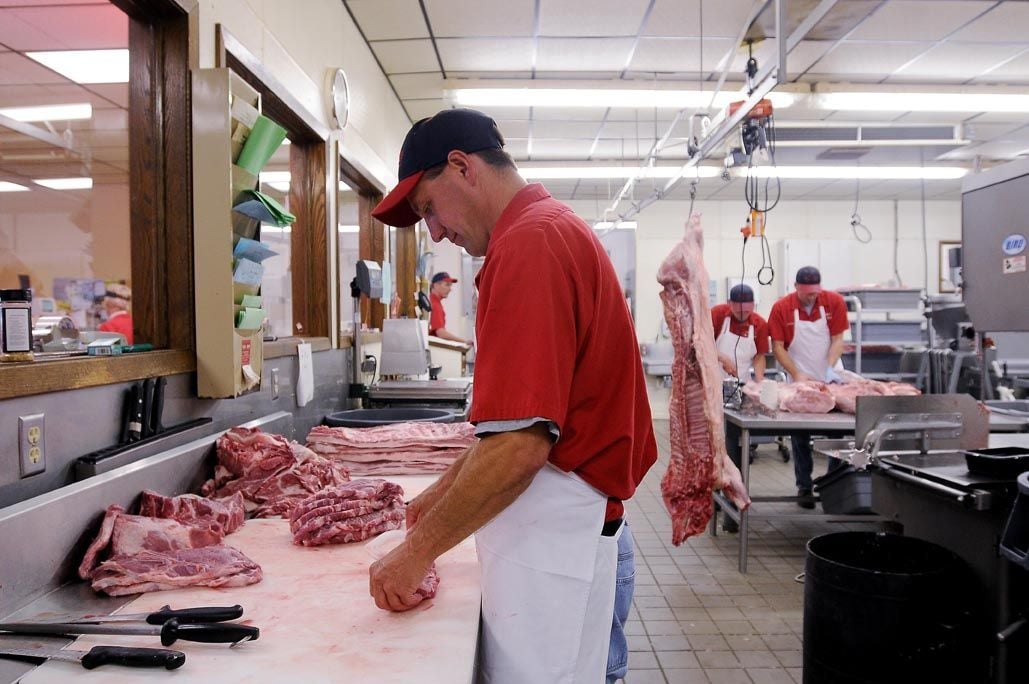 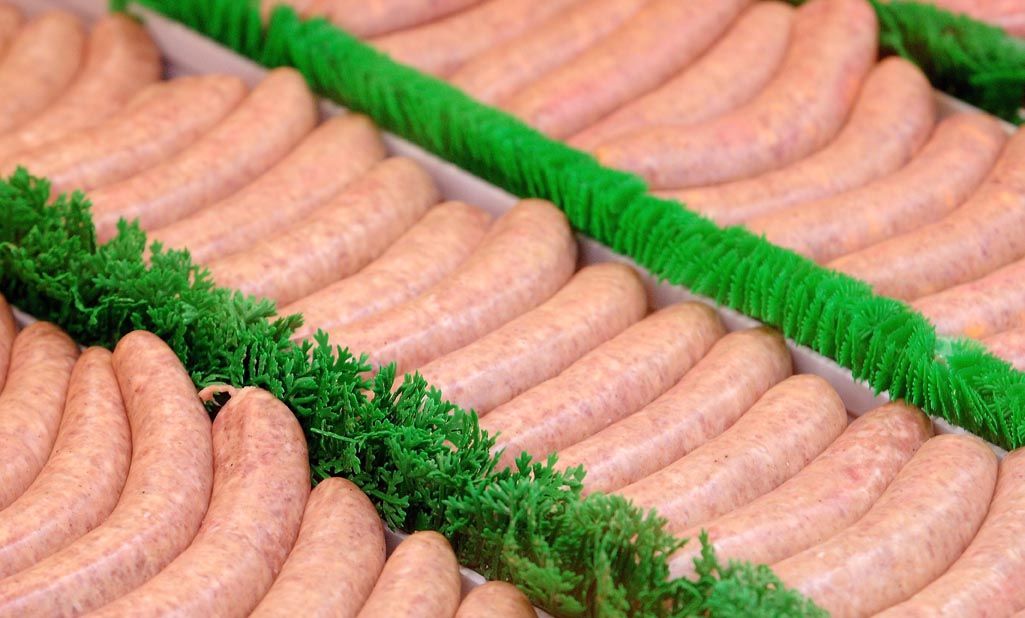 Schmidt’s has 65 varieties of sausage. 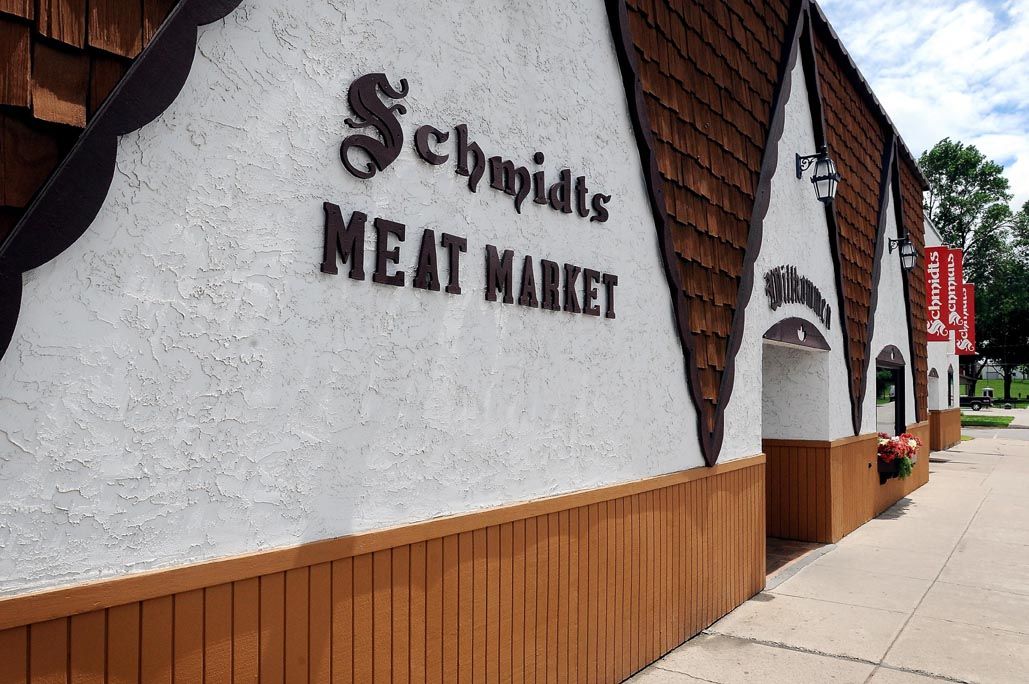 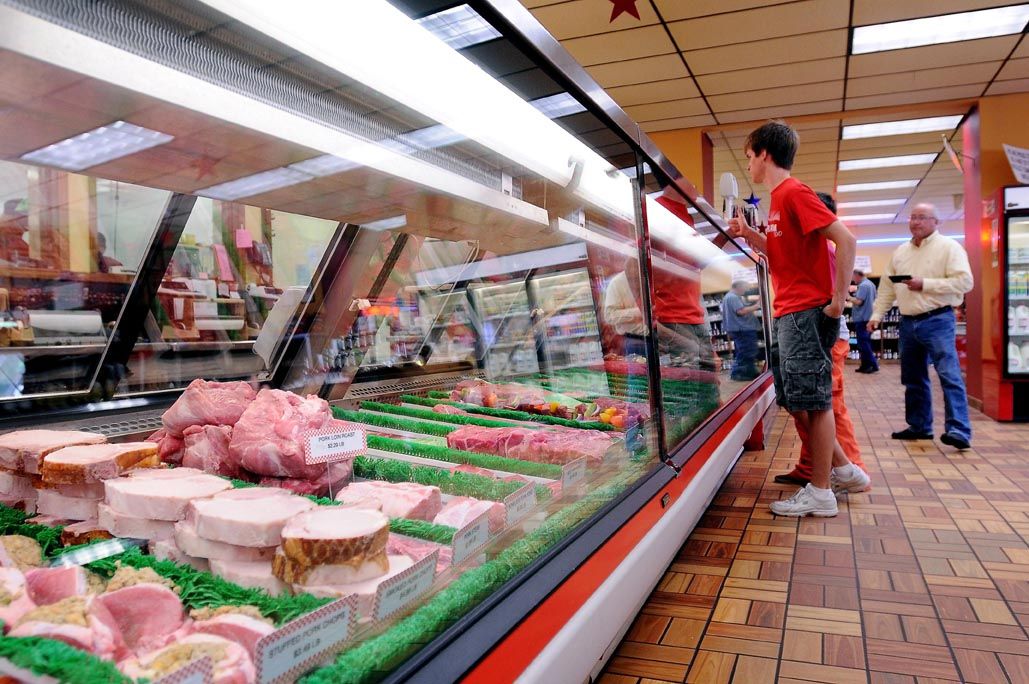 While business from farmers declined, Schmidt’s expanded its retail offerings.

Schmidt’s has been a staple in downtown Nicollet for decades. Bruce (left), Gary and Ryan Schmidt are ready to serve their customers.

Schmidt’s has 65 varieties of sausage.

While business from farmers declined, Schmidt’s expanded its retail offerings.

The butcher shop that Gerhardt and Esther Schmidt bought in downtown Nicollet in 1947 was small — just enough room for a meat counter, a work area and a smokehouse. There was an apartment upstairs, where the Schmidts lived with their children, Gary and Bruce. But the boys were raised downstairs, in the midst of the meat market that later became theirs and, later still, was passed on to a third generation as well.

“The business was our home,” says Gary Schmidt, who was 7 years old when his parents bought Schmidt’s Meat Market. “We learned everything here just by osmosis, just by being here all the time.”

Neither Gary nor Bruce is still full-time at the market, which has expanded to occupy almost a quarter of a block in Nicollet. Gary and his wife Geri work every other weekend and during the busy season; Geri still usually works three days a week as well. Bruce loads wood into the smokehouse every evening after the 10 p.m. news, and he and his wife Betty help out when needed.

Now it’s Gary’s son Ryan Schmidt, 44, who runs the business — and who is there all the time, especially during the busy season. “From the start of deer hunting season in November through the holidays and even into January, we work every day of the week,” Ryan says. “We don’t even take Thanksgiving off.”

Minnesota Valley Business: How has the meat market business changed over the time that your family has owned this business?

Gary Schmidt: We grew up in an era when every farm had livestock and chickens. They all needed a butcher. At that time, there were meat markets in every small town, because that’s what people needed then.

Bruce Schmidt: Now, many of those meat markets have folded. There’s just not enough business for all of them.

MVB: Why has Schmidt’s been able to survive?

MVB: The meat market seems like a traditional industry, but this business has been very innovative in its approach to it.

BS: Very much so. Things have changed so much since we started. Now there is so much variety of product. When we started, we had one summer sausage. Now we have nine. We’ve got 65 varieties of sausage, 15 varieties of brats, plus jerkies, snack sticks, dried beef. We were one of the first to do beef sticks; now we sell tons of them. But even along with the change, we still smoke our meat the old fashioned way. Very few still do that, but it gives our product its unique flavor.

MVB: And it’s still very much a family business.

RS: Outside of Grandpa and Grandma, pretty much everybody is still involved somehow. My dad and Bruce help out, and my mom still works the same schedule she’s always worked. I’m here all the time, and my wife Lynnita is here four days a week.

MVB: Do you have kids who might want to be involved as well?

RS: I have two young boys — 6 and 4. They’re too young right now. But when the point in time comes that they might want to have a job in high school, the option is available if they want it. And if they don’t, that’s fine too.

MVB: So there’s no pressure to be involved?

RS: No pressure at all. If they want to, then they can do it.

MVB: Have you thought about succession planning at all yet?

RS: You know, not too much yet. I just bought out my dad five years ago in August, so that hasn’t really even been on my mind yet.

MVB: Bruce and Gary, was it hard for you to let go of the business when Ryan bought it?

GS: For me, it was easy. My only concern was that he wanted to do it out of his own will and that he knew there was no obligation. Also, I wanted him to get fulfillment out of it, not just financially but also in the satisfaction of enjoying his work.

MVB: Can you imagine a time when you might not be involved at all with the meat market?

GS: Sure. This is a hard business. The labor is very physically demanding. There’s a lot of lifting and you’re on your feet a lot. So as you progress in age, it gets harder to do. That’s when it makes sense to step aside.