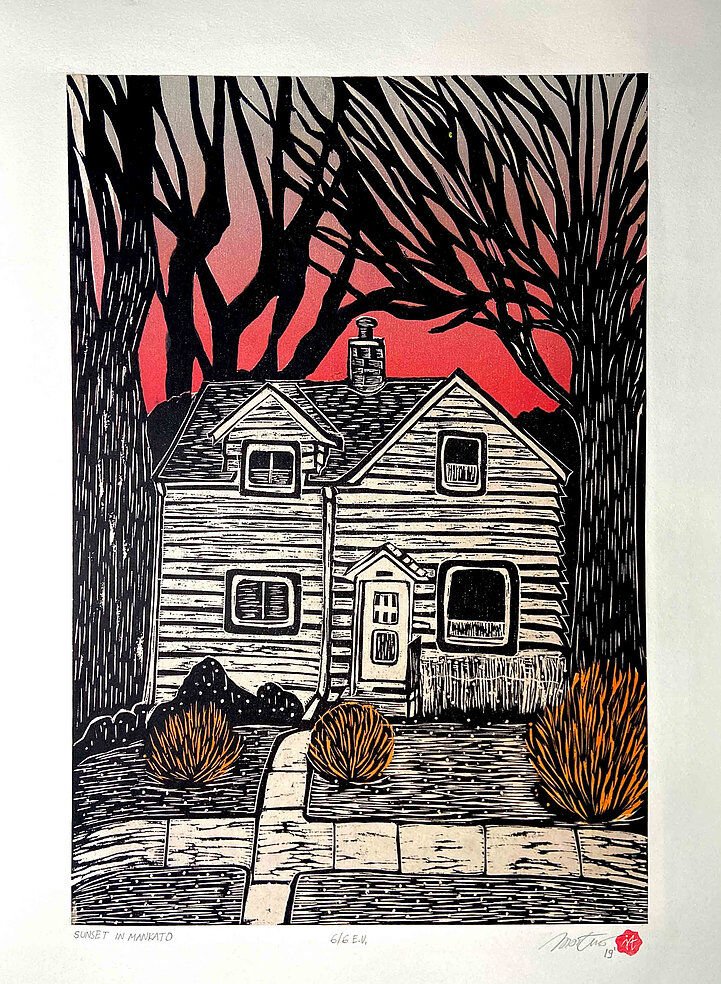 “Sunset in Mankato” is one of Mai Tran’s works. She has an exhibit at 410 Project this month. 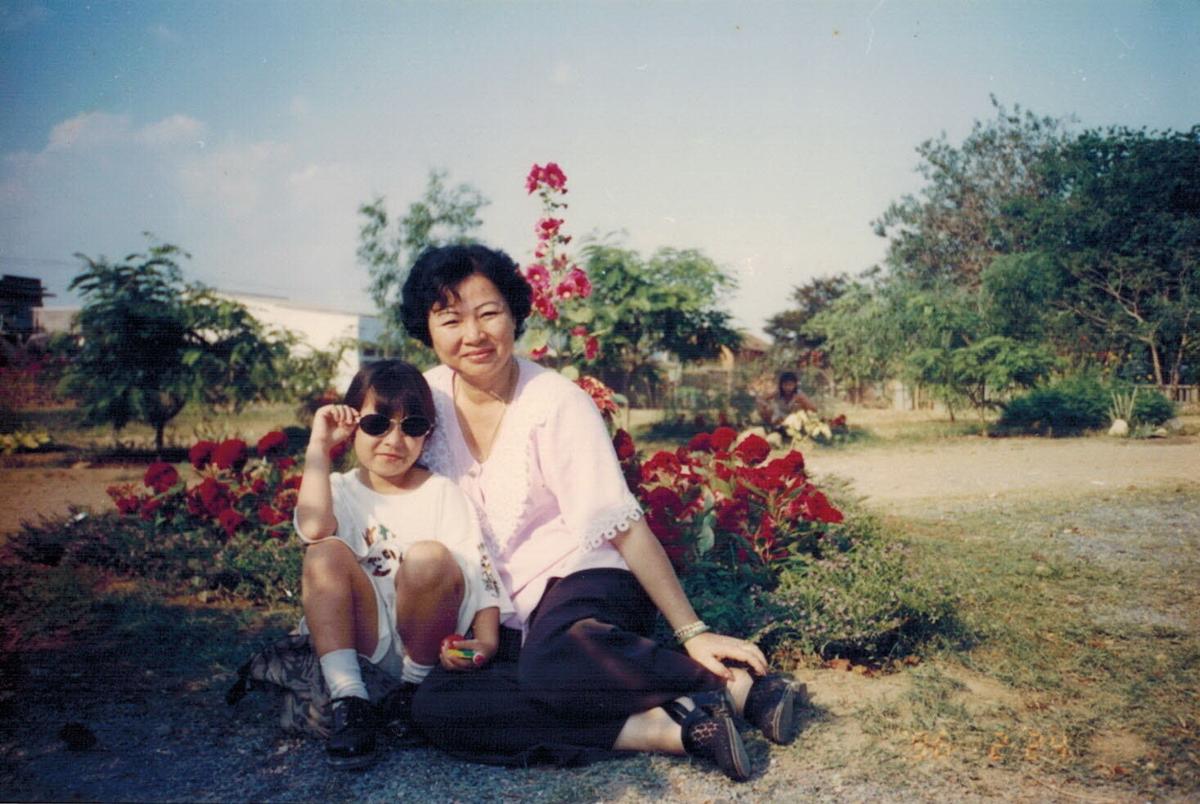 Mai Tran as a child in Vietnam with her mother. Although Tran’s family was not initially enthusiastic about her pursuing art, she eventually found a path to it. 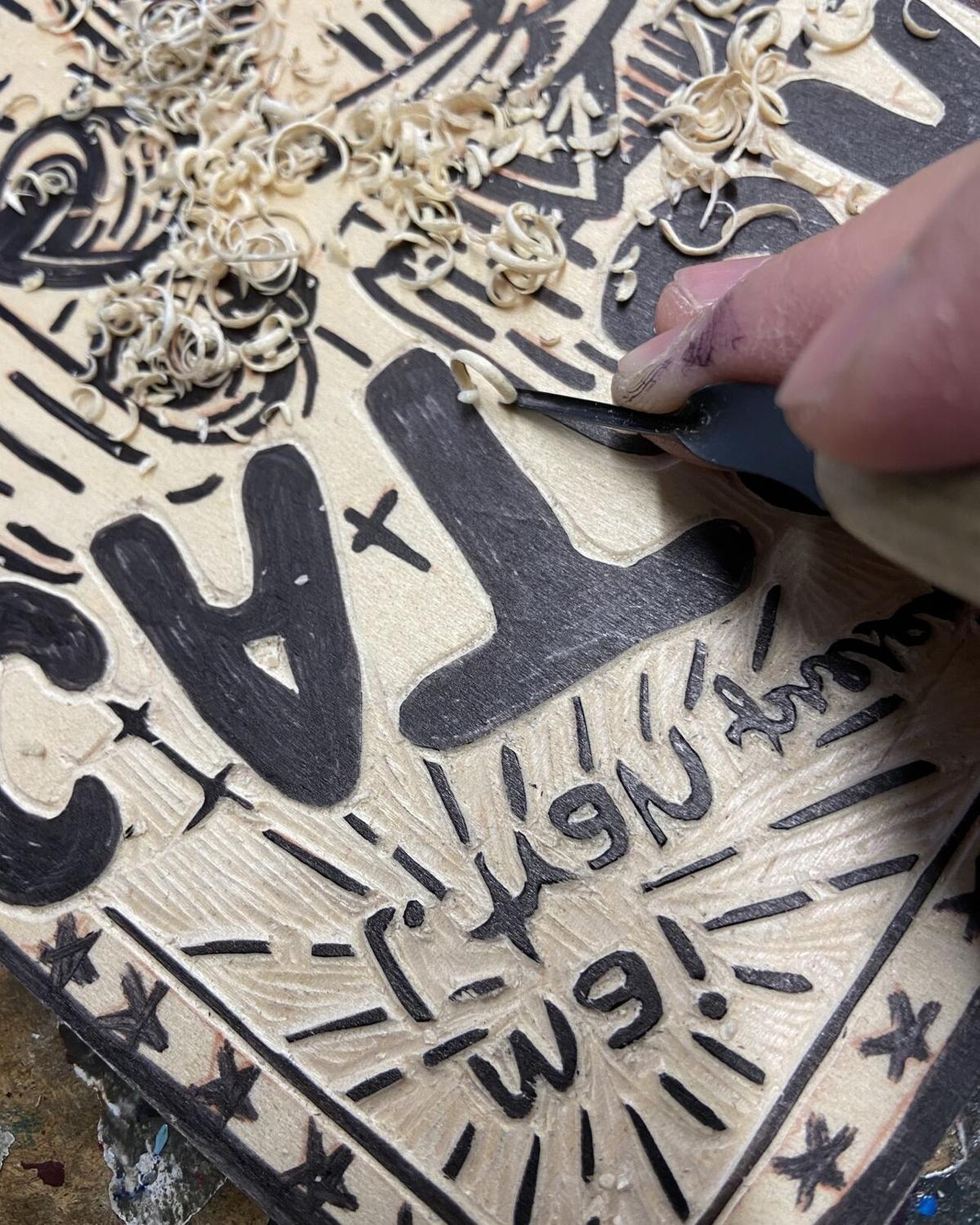 Tran works on one of her woodcuts.

“Sunset in Mankato” is one of Mai Tran’s works. She has an exhibit at 410 Project this month.

Mai Tran as a child in Vietnam with her mother. Although Tran’s family was not initially enthusiastic about her pursuing art, she eventually found a path to it.

Tran works on one of her woodcuts.

Printmaker Mai Tran is showcasing her series of relief prints at the 410 Project this month to share what her experience has been like living in the United States for the past six years.

“I grew up in the southern part of Vietnam, specifically Ho Chi Minh City,” Tran said. “I didn’t have a lot of experience in art or creativity back then. I liked drawing and usually spent lots of time doing it by myself, mostly portraitures. I didn’t have a chance to connect with the art community at all. Also, my family didn’t think it was a good choice to pursue.”

Because of that lack of support, Tran said she decided to pursue a college degree in interior design after graduating from high school.

“To be honest, now looking back I think it was a little reckless when I decided to go for interior design. I wanted to do fine art, but it wasn’t an ideal thing to do according to my family. So, I chose a major that could be an alternative for fine art, but I guess I was wrong.”

After working in the design and non-design fields, Tran discovered she wasn’t fulfilled in her career. And despite not working in the arts, she still had a passion for it.

“It played an important role in my life. Even though I didn’t do art at the time, but I liked going to exhibitions, craft fairs, art fairs, etc. It was a big relief besides my busy workdays.”

She soon found herself wanting to do more with art.

“Well, you know the feeling that something in your head keeps calling you to follow — the instinct you may call. I had been looking and researching Western paintings and Japanese arts. I got so into the Japanese prints and eventually wanted to do something like that.”

Once that feeling hit, Tran decided to pursue studying abroad in Japan.

“One of my cousins went to school here at MSU Mankato. So when I brought up to him the idea of studying abroad in Japan, he said I should consider MSU Mankato in the U.S. too because they had some good programs with decent tuition fees for international students as well. “

Aside from learning about the U.S. in the classroom history books and how the Vietnam War ended, Tran said she had limited knowledge of the country. She knew even less about Minnesota.

“I didn’t really know anything besides it will be cold and snowy.”

She decided to take a chance and moved to Mankato in December 2015 to attend Minnesota State University to study fine arts in printmaking.

“There is no winter from where I came from. It’s always hot and humid. So, I arrived here the day after Christmas. And when I woke up the following day, there was a snow shower, and the cold air breezed to my face. It was the best thing ever to happen to me.”

Tran earned her bachelor of fine arts degree, along with a minor in photography, in spring 2021. She is now a graduate teaching assistant pursuing her master’s degree.

Her show at the 410 Project Gallery features eight prints that fuse the legends of Vietnam with the landscapes in and around Mankato, including woodcut, linocut and etching prints, all of which are inspired by her homeland.

“I’m interested in Vietnamese mythology, history, and culture,” Tran said. “I didn’t really care about that stuff in the past, but I guess when I get older, I kind of want to know more about my roots in depth. So, I’ve been researching my own culture and making artworks about what I’ve learned to make them accessible to contemporary society. “

The exhibit will also include the original blocks made by Tran to create her prints.

“I got a lot of inspiration from the Mankato area, and I blended my own culture into it,” she said. “I hope they (visitors) will get to know more about my printmaking practice as well as different aspects of Vietnamese culture.”

What: Hallucination: Work by Mai Tran