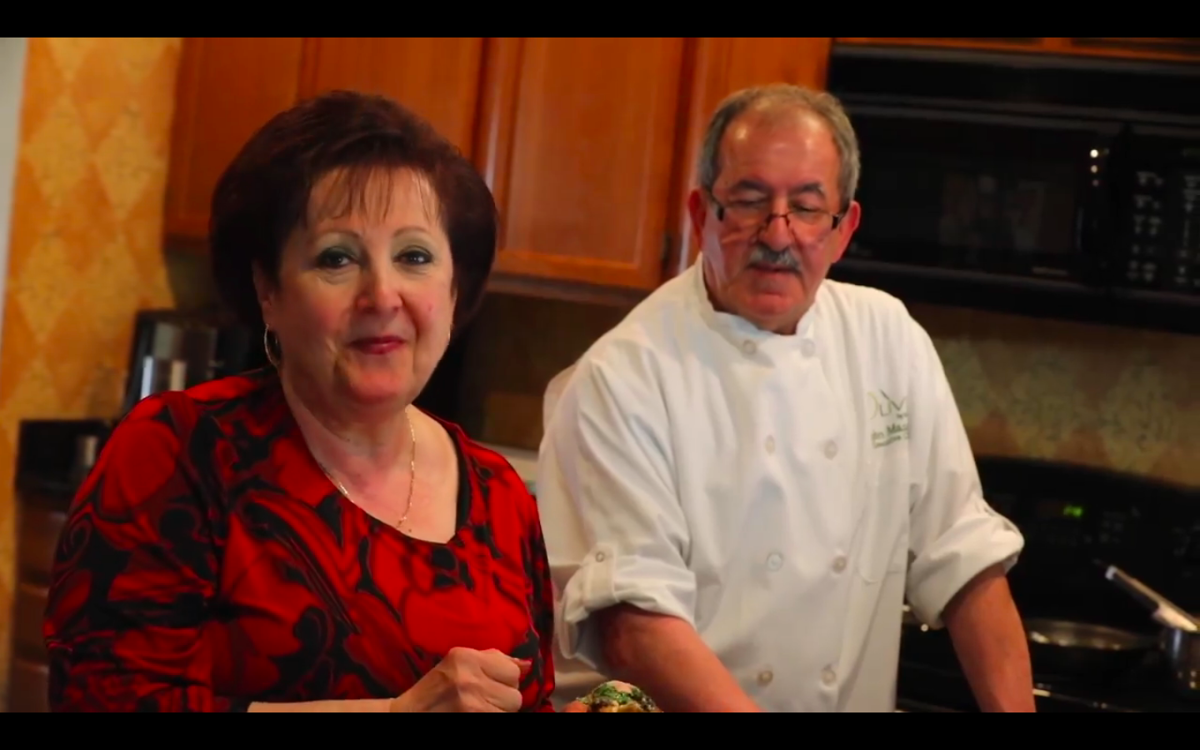 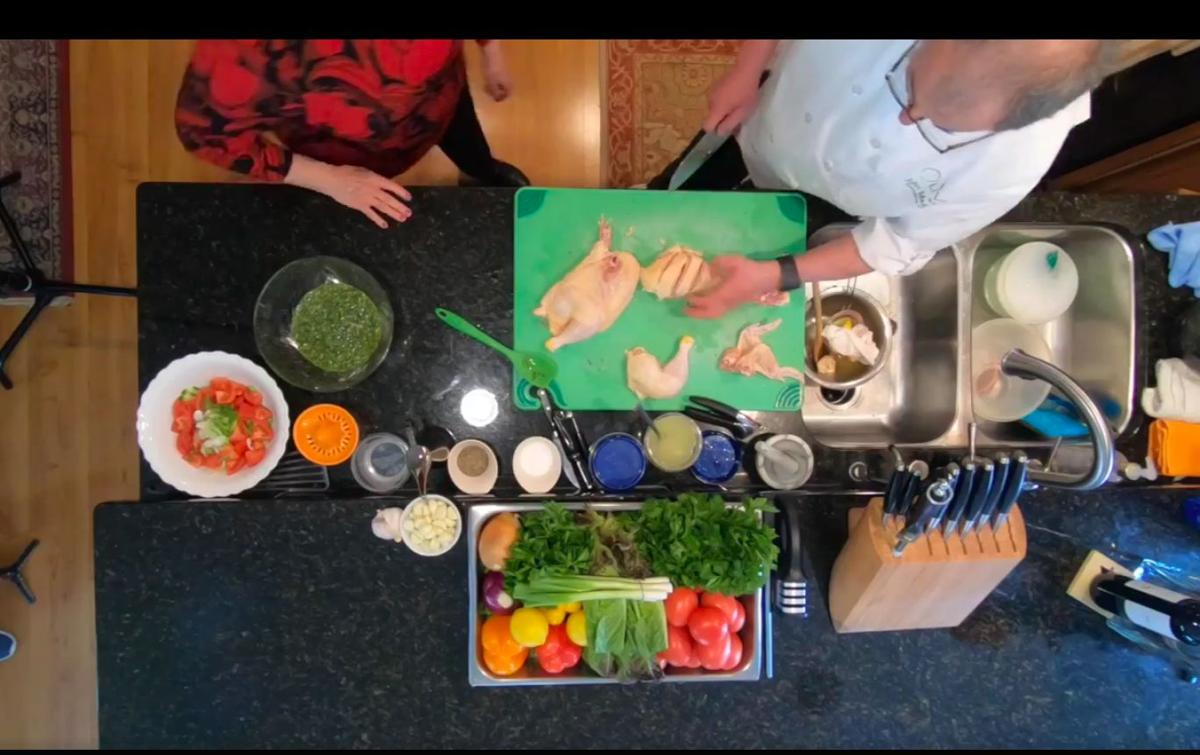 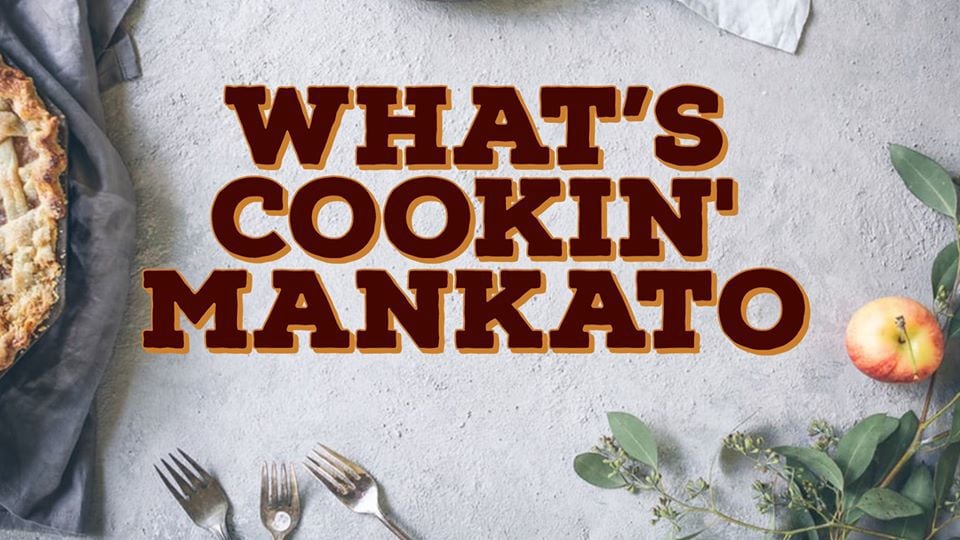 Eric Jones, co-director at the event center, said this was another creative way to keep the community engaged.

“Food, for one, is a lot of fun,” Jones said. “It’s just another idea for us to keep producing events.”

It also serves as an opportunity for viewers at home to donate to the COVID-19 Community Response Fund. The fund, established through the Greater Mankato Area United Way and Mankato Area Foundation, so far has awarded $132,750 to area organizations — such as the Blue Earth Nicollet County Humane Society, Feeding Every Baby Inc., ECHO Food Shelf and others — as of Feb. 24.

The first to appear on the cooking series: John and Najwa Massad, owners of Najwa Catering, Massad’s and Olives by Massad’s. Najwa, who happens to be Mankato’s mayor, presented the idea to the MCHS Event Center.

“It was a no-brainer,” Jones said. “They have such great chemistry together.”

And it was a no-brainer for the Massads, too. As natural entertainers and hospitable restaurant owners and hosts, the series allowed people into the Massad home, albeit virtually.

“Good afternoon, welcome to our home,” Najwa says in the debut episode. “This is my husband John, and (I’m) Najwa … and John is going to do his famous chicken,” Najwa greeted the online audience.

The couple stood behind the island of their home’s kitchen, a place where guests and family usually gather to talk or drink wine, as John cooks.

“It wasn’t any different than when we entertain,” Najwa said. “We’re welcoming people to our house like we always do. We love having company.”

To begin John’s famous chicken recipe, he leads viewers with an important step: marinating the chicken.

“We start with the garlic and salt. Fresh garlic — it has to be fresh,” John said. “It can’t be from the jar.”

After placing the ingredients in for the paste-like marinade, John places lemon juice into a mortar.

“Is that fresh lemon juice or out of a bottle?” Najwa asked.

“Can we use it out of the bottle if we don’t have fresh?”

The Massads’ recipe is easy and simple for anyone to follow. John included helpful tips, too, for the everyday cook. He showed viewers at home how to sharpen a knife and how to properly hold a knife. He demonstrated the difference of tomatoes and how to spatchcock a whole chicken, piecing it out for grilling. He also offers cleaning tips such as keeping a diluted bucket of bleach in the sink to sanitize equipment after handling chicken.

Najwa says John has always had a knack for teaching. Students from the South Central College’s culinary program head to Olive’s to learn certain skills. Najwa says she took notice of the way students look up to John.

“I always thought it would be a fantastic thing for John to do,” she said.

Many joined the Massads Monday night. Views topped 2,000 as of Tuesday morning. And for the Massads, it felt as though they had been welcoming all of the viewers to their home that night.

Hospitality, Najwa said, has always been vital to their businesses since the mid 1980s in Mankato.

“We always say ‘breaking the bread’ … That’s connected us, as the Massads, to this community,” she said. “This community is who we are. We love what we do and that’s what counts.”

The couple also hopes that with the recipes, families can sit together and also break bread among each other. Cooks at home can make the recipes their own, playing around with ingredients and sit down with their families to enjoy something they made on their own.

The Massads welcome online viewers into their home again 5:30 p.m. Monday. (The video will also remain online for people to catch it later.)

The series, as it continues, will feature more local chefs and restaurants.

“It was wonderful to connect into their homes, into their kitchens and lives, and teaching them,” Najwa said. “(Viewers) are going to sit at the table, see what they made — not what we made — but what they made with their hands.”

When: 5:30 p.m. Mondays on @MCHSEventCenter, Instagram or on KTV

How to help: Donate to the COVID-19 Community Response Fund at mankatoareafoundation.com, mankatounitedway.org, or text 'COMMUNITY' to 833-892-4192