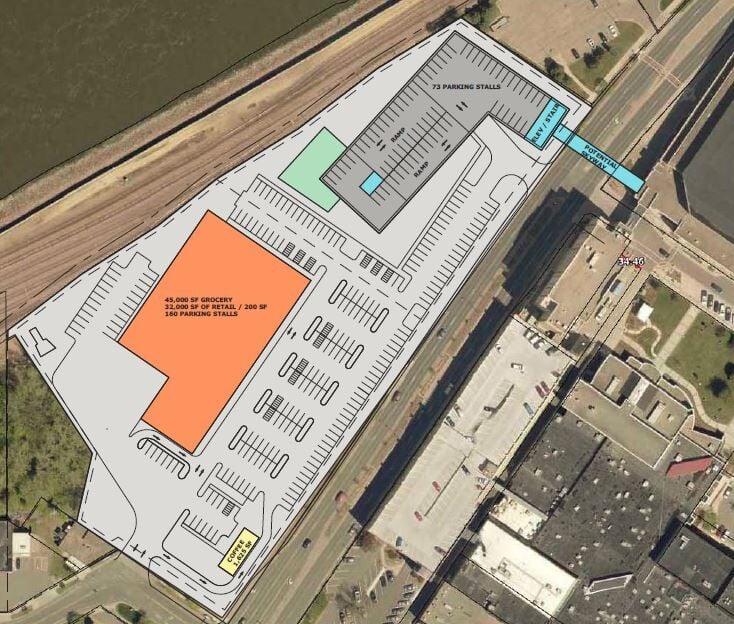 A proposed redevelopment of the downtown Hy-Vee property includes a new and larger supermarket and a six-story apartment complex, possibly with a skyway over Riverfront Drive connecting to the civic center. 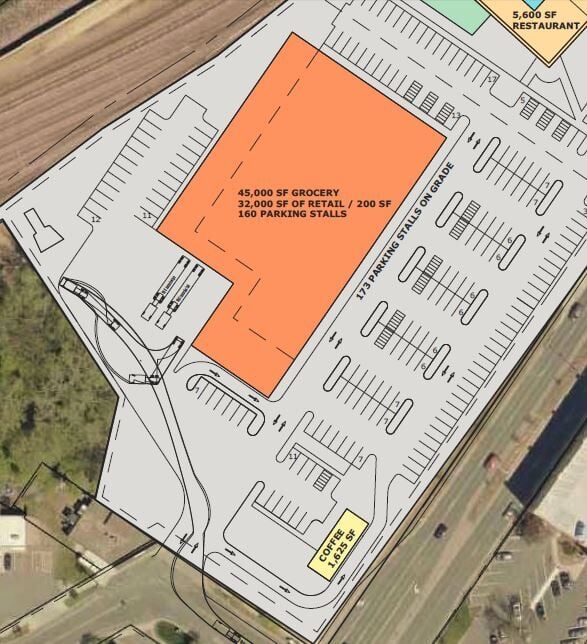 A new downtown Mankato Hy-Vee would be about 50% larger and would face Riverfront Drive, with a yet-to-be-named coffee shop at the corner of Riverfront and Cherry/Minnesota streets. 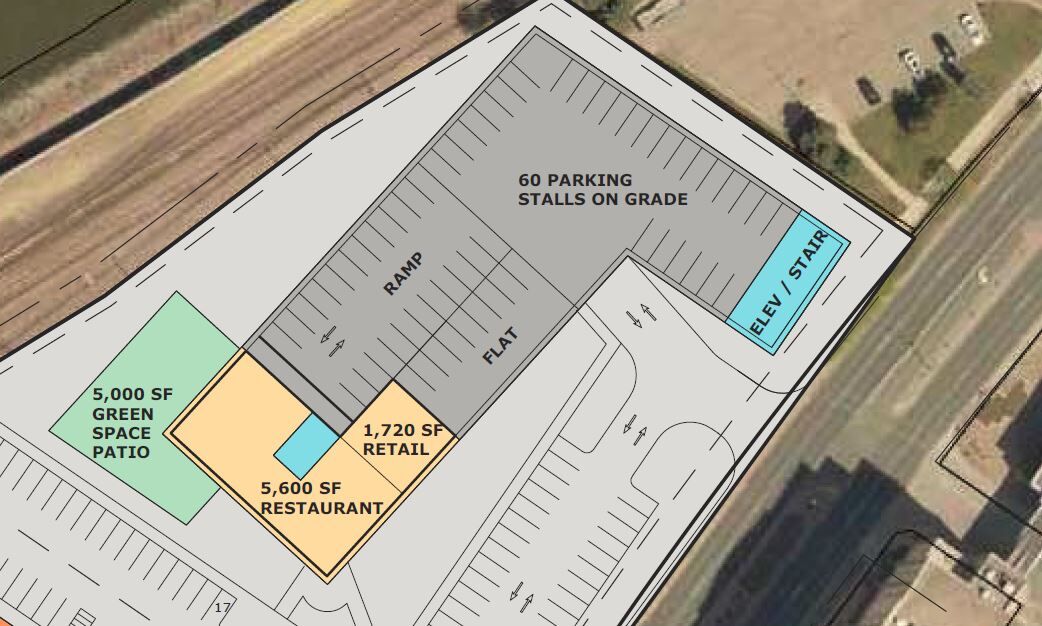 The ground floor of a proposed apartment complex on the downtown Hy-Vee lot may include a restaurant and large patio. Preliminary plans show three stories of parking topped by three levels of apartments. 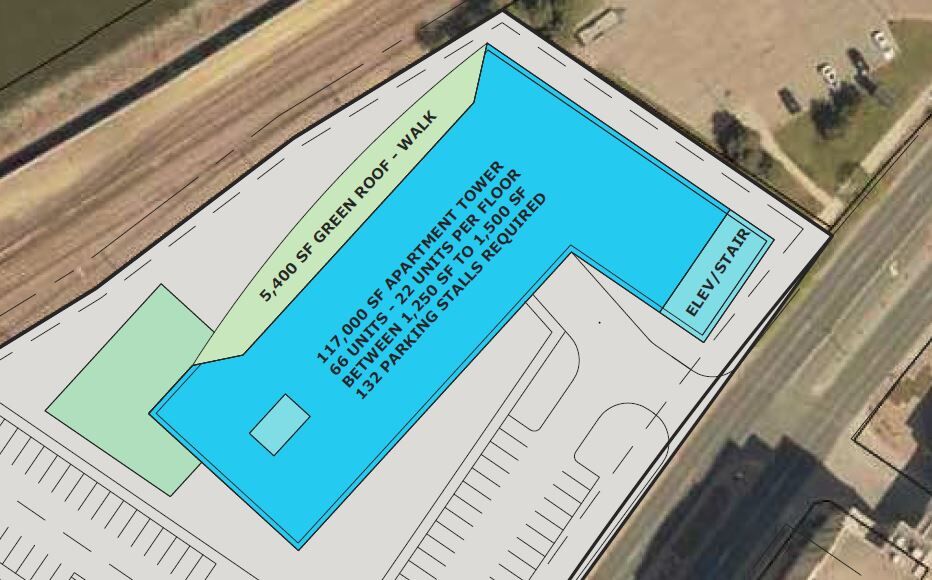 One concept for the apartment building, which would include up to 66 units, is a grass-covered space on the roof overlooking the Minnesota River valley.

A proposed redevelopment of the downtown Hy-Vee property includes a new and larger supermarket and a six-story apartment complex, possibly with a skyway over Riverfront Drive connecting to the civic center.

A new downtown Mankato Hy-Vee would be about 50% larger and would face Riverfront Drive, with a yet-to-be-named coffee shop at the corner of Riverfront and Cherry/Minnesota streets.

The ground floor of a proposed apartment complex on the downtown Hy-Vee lot may include a restaurant and large patio. Preliminary plans show three stories of parking topped by three levels of apartments.

One concept for the apartment building, which would include up to 66 units, is a grass-covered space on the roof overlooking the Minnesota River valley.

MANKATO — A $48 million redevelopment of the downtown Hy-Vee site — bringing a new, expanded supermarket, a six-story 66-unit apartment building, and a new restaurant and coffee shop — could highlight a surprisingly strong 2021 construction season in Mankato.

“Construction seems to be a bright spot in the economy,” said Community Development Director Paul Vogel, cautioning that the pandemic leaves some doubt about whether projects will move forward as planned. “How that’s going to pan out for 2021 is yet to be seen.”

The Hy-Vee project is by far the largest proposal that’s been brought to the city by developers, but it’s not alone. One of the largest affordable housing projects in city history is being contemplated west of Home Depot, and two dozen townhouses are slated for a lot across from Mankato’s newest elementary school.

Another major solar array is coming to an industrial area on the city’s north side. And an underused parcel near downtown could see a Dunkin Donuts and other new businesses added if direct access from Riverfront Drive is approved by the city.

All told, 2021 may bring more than $100 million in new development — matching a figure that’s expected to be reached by the end of this year, said City Manager Pat Hentges.

“Overall, at least our construction is trending in a very positive direction,” Hentges said.

This year already has seen $82 million in new construction, ahead of what occurred by the same point in pre-pandemic 2019.

“This time last year, we were only at $66 million,” he said. “So we’ll reach last year’s level of well over $100 million in new construction.”

And at least for now, the preliminary plans for next year would put the city on pace to top $100 million again in new development — something that could be critical in offsetting expected reductions in taxable valuations of retail stores, restaurants, bars and other businesses hit hard by the pandemic.

“There’s still reason to be optimistic about the economy,” Hentges said. “But some areas of the economy aren’t performing as well.”

The land along Riverfront Drive that’s home to the downtown Hy-Vee is actually owned by the city. Petrie Development Corp. signed a 99-year lease on the parcel in 1982 and built the supermarket the following year. That store never fully utilized the lot, which extends well beyond the fence that borders the store’s parking lot and hides the neighboring rail corridor — a vacant area nearly 100 feet wide and 750 feet long.

The proposed redevelopment, by contrast, would cover virtually the entire seven-acre parcel. The new supermarket would be about 35% larger than the current 33,000-square-foot store and would be set back from Riverfront Drive, extending to the edge of the rail corridor with the store’s loading docks hidden from view.

Currently a windowless concrete side of the supermarket sits right against Riverfront Drive with the store’s front facing Minnesota Street.

“So it would be a dramatic reconfiguration of what exists, using the full frontage of Riverfront,” Hentges said.

The remainder of the lot would also be fully used by parking, by an unnamed 1,600-square-foot coffee shop with a drive-thru near Riverfront on the southeast corner of the parcel, and by the new six-story building to be constructed on the northern end of the lot.

The apartment building would include three levels of parking with three stories of income-based affordable apartments above the ramp. The ground floor also is expected to host a 1,720-square-foot retail space and a 5,600-square-foot restaurant with an adjoining garden patio of 5,000 square feet.

Site plans also show a potential skyway to the Mayo Clinic Event Center, providing a connection between the new development and the existing skyways serving downtown. And the plans contain the option of a 5,400-square-foot “green roof” on top of the apartment building, which would give tenants a place to view the Minnesota River, North Mankato and the broader river valley.

“There are a lot of possibilities there,” Vogel said. “At this point, it’s a concept. It’s an exciting concept, though.”

Residential development hasn’t slowed during the current recession, and plans brought to the city for 2021 continue that trend.

California-based Newport Partners, which has a Midwest division in the Twin Cities, has contacted the city about building an affordable apartment complex on a parcel just west of Community Bank along North Victory Drive not far from Home Depot.

“I think it has potential to be upward of 80 units,” Hentges said, cautioning that the project will likely need to compete for federal tax credits for low-income housing and may need to be constructed in phases.

While that project will continue the rapid residential growth around Country Club Estates north of Highway 14, a townhouse project will fill an open lot on the city’s south side.

Single-family homes and apartments have gone up quickly on land north and west of Rosa Parks Elementary School since its construction in 2009. A proposed 24-unit townhouse project would fill one of the last open lots in that sector — the parcel on the northwest quadrant of the Heron Drive-Timberwolf Drive intersection. (Another previously announced affordable housing apartment building is planned for across Heron Drive.)

Mankato has repeatedly shifted its land-use plans in recent years from commercial to residential as demand for retail property has waned. The Newport Partners apartment complex would require another of those zoning switches.

On the northern edge of town, a different land-use transition has been occurring — industrial to solar. City-owned property along Industrial Road, long intended for manufacturing, has twice been sold for large solar arrays.

With nearly 60 acres already making that transition in the past three years, more is coming with a $500,000 sale planned to IPS Solar for an array on 10 acres in the Sakatah Industrial Park.

The sale is expected to be brought to the city Economic Development Authority on Oct. 12.

Finally, Schwickerts Land Co. is asking the city to approve a new access from Riverfront Drive to the former Snell Motors site. More than a decade ago, the car lot was transformed into a strip mall anchored by Anytime Fitness.

Vogel said there is room for added businesses in unused portions of the strip mall’s parking lot, with a Dunkin Donuts proposed as the first.

For that to happen, the developers have told city officials they need direct access from Riverfront — essentially extending Liberty Street into the property. An intersection study is underway, examining whether turn lanes would be needed, if the medians on Riverfront Drive would have to be scaled back, and how the change might impact emergency vehicles exiting the Public Safety Center across Riverfront from the site.