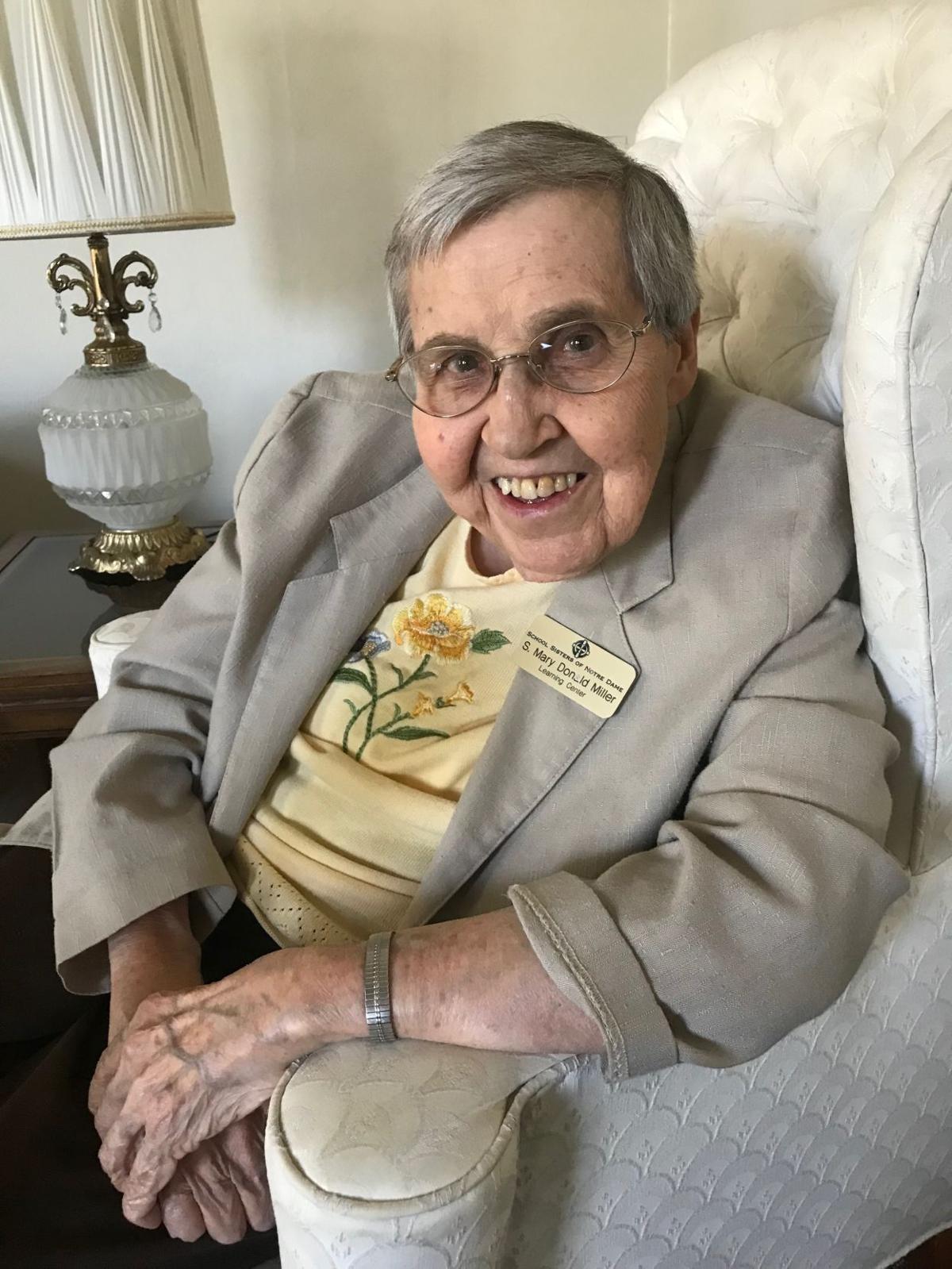 Sister Mary Donald Miller, a member of the School Sisters of Notre Dame community, founded a center on Good Counsel where more than 4,000 students have received tutoring throughout the past 52 years. Miller died Oct. 14. 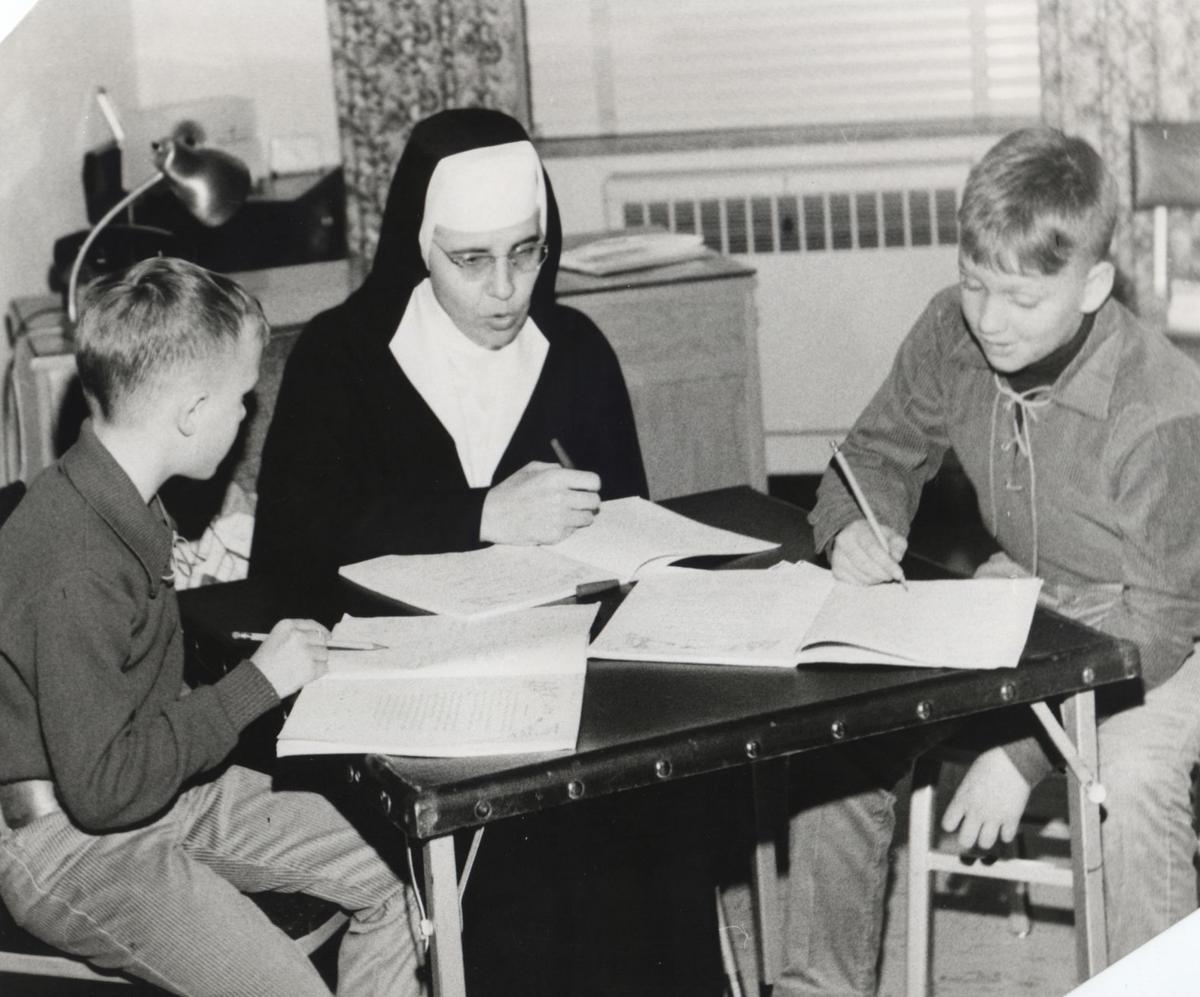 Sister Mary Donald Miller, a member of the School Sisters of Notre Dame community, founded a center on Good Counsel where more than 4,000 students have received tutoring throughout the past 52 years. Miller died Oct. 14.

During a funeral Mass Monday for Sister Mary Donald Miller, the founder of Good Counsel Learning Center was remembered as a person of faith who showed support to not only her students but to their parents and teachers.

Sister Emma Buresh, a former tutor at the center, described to the Good Counsel Chapel attendees how Miller years ago helped turn around her attitude when an extremely shy boy failed a learning progress test. Buresh didn’t think her tutoring had resulted in any progress.

Miller pointed out although the student’s reading and math skills may not have improved, he’d begun to make eye contact with his teacher and he smiled and talked to her.

“She always saw the good,” Buresh said during the funeral for her fellow member of the School Sisters of Notre Dame community.

In 1967, she founded a learning center that continues to provide one-on-one sessions for people of all ages. About half of the center’s students are studying English as a second language or preparing for their citizenship tests.

The St. Paul native took first vows on July 17, 1948. She served as a teacher and administrator in Catholic schools for more than 55 years, including 11 years as principal for Mankato Area Catholic Schools. She was principal for Fitzgerald Middle School when she retired in 2004.

Her first teaching experience was at a school in St. Paul. She taught seventh graders at Holy Rosary School in North Mankato from 1960-62. She also had served as the principal and a teacher at St. Casimir School in Wells for four years, and she had an 18-year stint as an administrator for Winona Catholic Schools.

Shelley Schultz was the principal for Janesville-Waldorf-Pemberton’s middle school at the same time Miller was at Fitzgerald.

“We would get together and compare notes,” Schultz said. “Soon, we were not just colleagues, we had become friends.”

The women sometimes traveled together to craft fairs. After Miller’s retirement, the two would spend time together at Good Counsel, where Schultz is an education consultant.

Miller’s positive attitude was appreciated by many. Funeral attendees agreed whenever someone would ask Miller how she was feeling, the noctogenerian nun’s answer always was “grateful.”

Until recently, Miller assisted at the learning center and was learning to speak and write in Spanish.

Her friend was a lifetime learner, who also liked to play bridge and watch sports, Schultz said. Miller especially supported opportunities in sports for women. She had made softball games part of the school day when she was a teacher.

“Sister told me she would be dressed in full habit when she pitched to the kids,” Schultz said.

Miller also was a strong advocate for peace.

While she was at Fitzgerald, Miller helped its faculty develop plans to teach students peace concepts and creative problem-solving techniques to avoid conflicts that could result in violence. The success of the Peace School System earned accolades from area advocates for cultural diversity.

“Prayer and love inspired her to service,” Buresh said.

In 2012, she was honored for her 10 years as a volunteer with the Communication Center of the State Services for the Blind.

During the reading center’s 50th anniversary celebration in August 2017, Miller described the fulfillment of her dream to create a center.

A group of sisters were discussing new uses for vacant dormitory space after Good Counsel Academy students moved into a new building. Miller’s ready suggestion of a reading center was accepted, despite a lack of concrete plans for turning the empty area into tutoring space. At first, card tables were used for desks.

She looked to her former adviser at Cardinal Stritch University for guidance. Her sisters at Good Counsel provided the elbow grease — from varnishing floors to sewing drapes to preparing student applications and advertisements.

Six adults and 57 youths were enrolled for the center’s first six-week session. More than 4,000 students who represent 20 countries have used the center’s services in the past five decades.

Current director, Sister Dorothy Zeller, estimated in 2017 about 100 students were being helped with their reading, writing, math and ESL skills as well as citizenship classes.

Several former students offered guestbook comments for Miller’s online obituary page. Georgene Benson recalled how she’d had problems learning to spell; however, Miller had graciously ignored at least one of her mistakes. Kathy Back Soller appreciated Miller’s sense of humor when they both contracted mumps.

LaVerne Hoffman posted a note on Mankato Memories: “Not a mean bone in her body, she saw and found the good in everybody.”

Brittini Leigh followed up with a little red heart after comments that summed up what several others recalled: “She was my principal at Fitz. I love remembering how she opened school meetings there with, “Good morning, good people!”

Jeff Blahnik, of Norman, Oklahoma, wrote of Miller’s leadership with Winona Area Catholic Schools: “It was a fairly volatile time and change-filled time as we consolidated schools. Sister Mary Donald was exactly the leader WACS needed — we all revered her.

“She is one of those precious few in my life where I can look back and say she clearly understood and fulfilled her purpose in life. She did so humbly, selflessly and so well.”