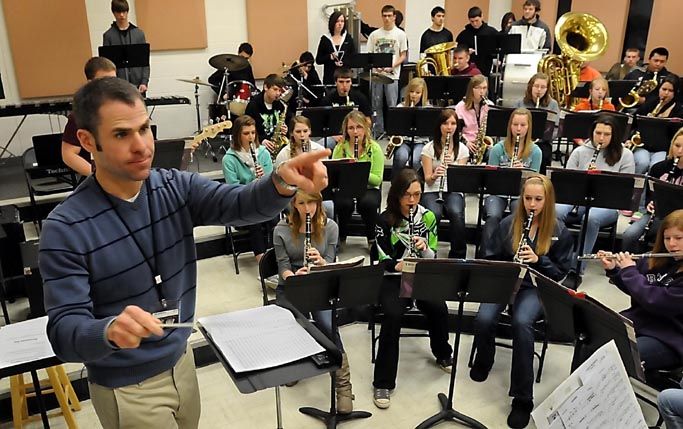 Erik Hermanson has been teaching band at Cleveland High School since he graduated from Gustavus Adolphus College 18 years ago.

Space is tight in the Cleveland High School band practice room when the concert band is at work. Nearly 70 percent of the school’s students participate.

Erik Hermanson has been teaching band at Cleveland High School since he graduated from Gustavus Adolphus College 18 years ago.

Space is tight in the Cleveland High School band practice room when the concert band is at work. Nearly 70 percent of the school’s students participate.

If Erik Hermanson brought his trombone into a Cleveland High School hallway and pushed his slide out in any direction as students shuffled between classes, there’s a good chance he would poke one of his band students.

Of the 126 students in Cleveland’s senior high school, 85 of them, or nearly 70 percent, are in band. In the junior high ranks, more than 85 percent of the students participate in band, meaning only eight of those 56 students don’t pick up an instrument and play for the school. Only three of the 34 students in sixth grade don’t play.

In addition to the senior high, junior high and sixth-grade concert bands, there are five jazz bands at the school. Twenty students have earned seats with the top jazz band, which is more than all of the students who were in the Cleveland High School Concert Band when Hermanson began teaching there 18 years ago.

“When I first started, there were 19 kids in the top band in the senior high,” he said. “It was pretty scary.”

Hermanson said he has been able to build such a strong music program through changes made by school administrators. They changed the schedule so there were band classes every day instead of every other day, he said. They also changed the classes from afternoons to mornings, so student athletes don’t miss so many band practices.

Those school administrators say Hermanson is the reason the program is so popular, and parents and students agree. His bands are disciplined and their performances are as good or better than many larger Minnesota schools that have the ability to recruit from huge student bodies, Principal Dawn Brown said.

“He’s very much respected by the students,” she said. “He treats them with respect, but he has high expectations and expects a lot from them. That’s how he gets results.

“I think one thing about him is when a teacher believes students can succeed and they can do well and they can perform at high levels, then the students believe that. They’re proud to do that for him.”

Although Hermanson literally has a list of “several incredible teachers” who were “great mentors,” he said it was Gustavus Adolphus College music professor Steve Wright who sparked what is now an insatiable interest in jazz. Hermanson had transferred to Gustavus from Bethany Lutheran College at the same time as Wright was looking to fill an opening for a trombone player in the Gustavus jazz band.

Wright said Hermanson told him that was his introduction to real jazz.

“He just got terribly excited about it, and the rest is history,” Wright said. “He accuses me of creating a love of jazz and what has become an expensive music collection.”

He’s also not surprised Hermanson has dedicated so much of his career to a small school. Wright added, however, that with the cutbacks so many schools face, Hermanson’s students are lucky to have him.

“He just seems to have flourished over there,” Wright said. “I like seeing that. My own father was a music educator years ago. I love seeing someone go to a small school like that and give students an opportunity they might not have in other places.

“He has an innate excitement about the music itself. I also think he’s a born music teacher. He just takes to it; there’s no explanation.”

Grant Den Herder, a Cleveland High School senior who has been playing in the top jazz band since he was a sophomore, said Schmalenberger will likely pop in for one practice before joining the band on stage. He said it’s “cool” to watch talented musicians come in, catch on to the music right away and jam with the band.

Explaining why band is so popular in Cleveland, Den Herder also said there’s something cool about Hermanson. He has a way of getting students hooked to music at a young age, then getting them to keep coming back.

“ He’s always got new ways for us to play,” Den Herder said. “He picks out good songs, which makes it more fun than playing the same boring songs all year.