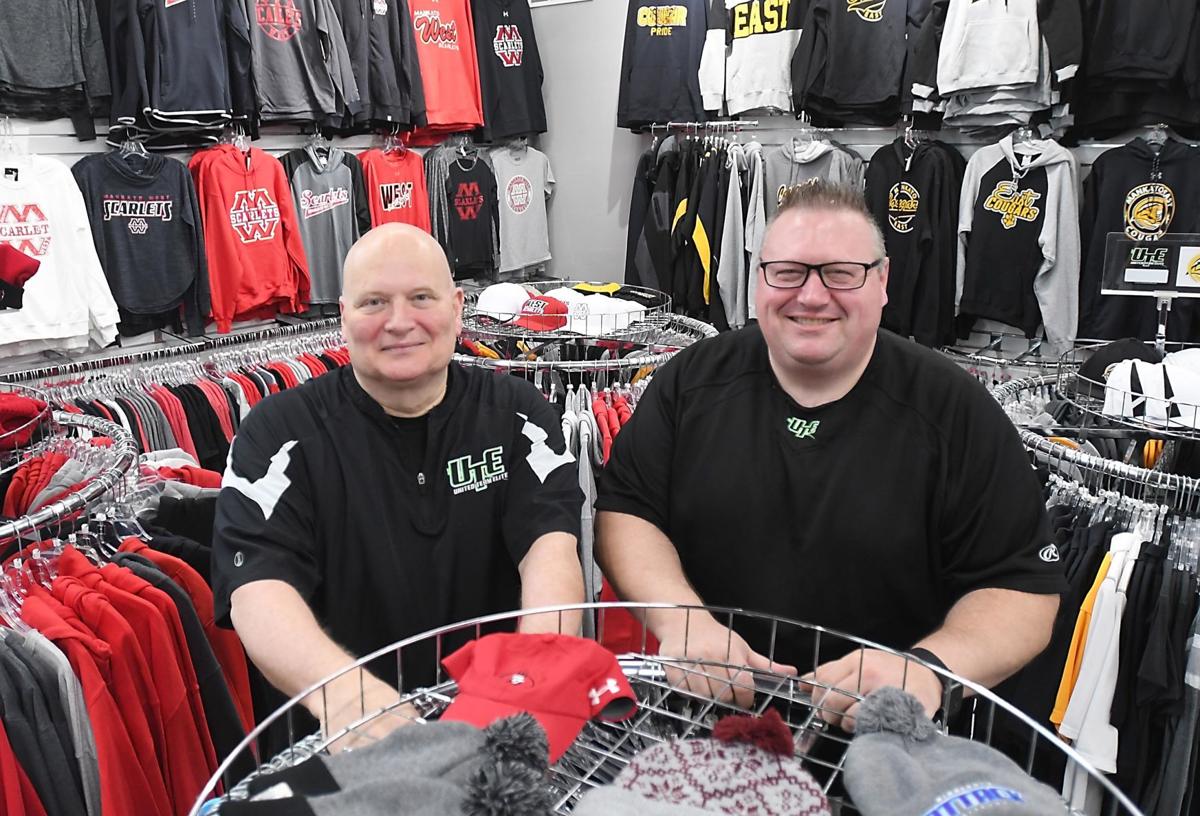 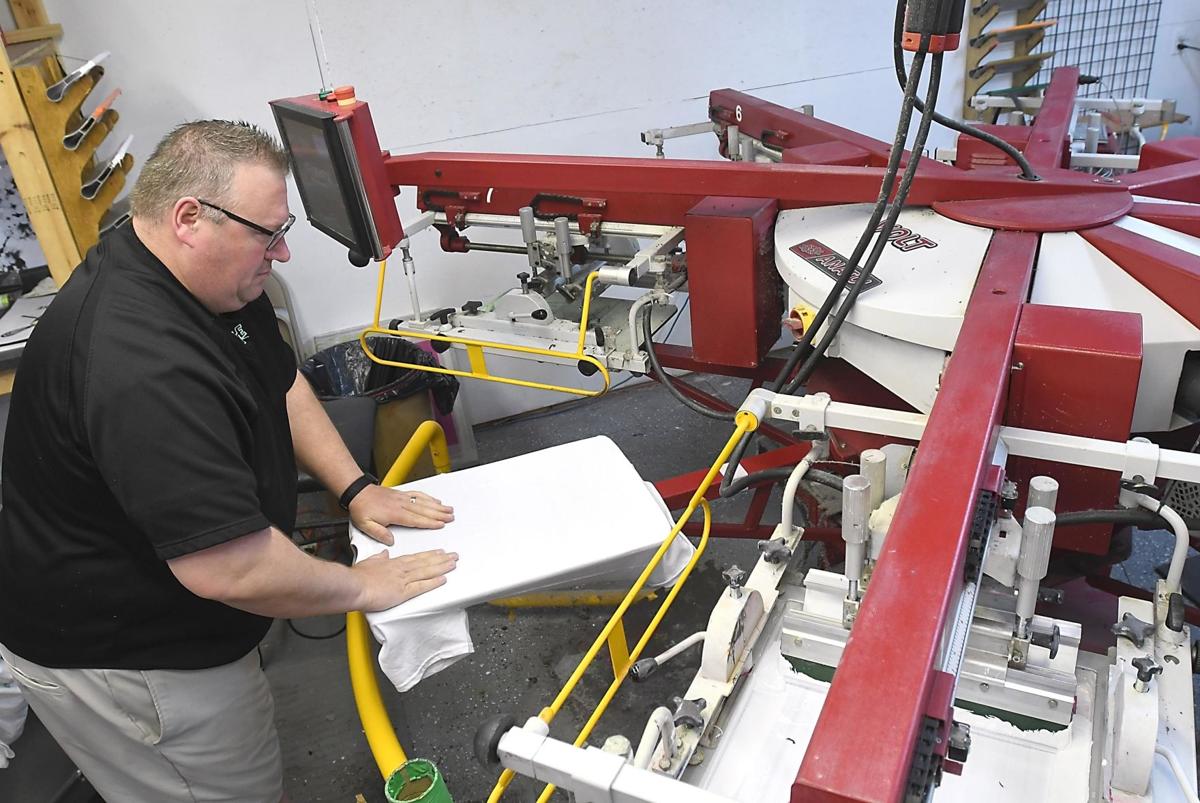 NORTH MANKATO — For Paul Boettcher and Troy Russell, co-owners of United Team Elite, their business is all about teamwork—after all, it’s right there in the name.

Their graphic design company, founded in 2015 and located on Lookout Drive in North Mankato, provides a range of services, from custom uniform designs to screen printing to embroidery. Much of their business comes from schools and sports teams—but there are many other types of clients, too, Boettcher said. That’s where the broader idea of a “team” comes in.

“A name like United Team Elite makes you think of just [school] teams, but we consider any group of people who work together for a common purpose a team,” he explained.

There’s a second meaning behind the name, too, he added: United Team Elite was formed out of two other companies, Nighthawk Graphics and Sports Warehouse. Boettcher had started Nighthawk Graphics, while Russell owned and operated Sports Warehouse. But as the two business owners continued to do work together throughout the years, they decided to simplify things and combine their companies.

Boettcher hails from Emmons, Minn., and earned a bachelor’s degree in art from Winona State University. After marrying his wife, Susie, they moved to Arizona, where he worked in retail as a store manager for the largest office supply and furniture store in Phoenix.

Eventually, he and his wife decided to move back to Minnesota to be closer to her family. They both found jobs at the Taylor Corporation, with Boettcher running different printing presses and creating custom artwork. He worked there for 18 years and said the time was instrumental in helping him learn what to do when he struck out on his own.

“The product knowledge that I gained working there is really the basis for how I run things (at United Team Elite),” he said.

After leaving Taylor, Boettcher worked in a similar position for a short period before deciding to take the plunge and start his own graphic design business.

“I really always wanted to do it,” he said. “I hate to say that I just woke up one day and said ‘I’m going to do it,’ but it almost was like that. I thought, ‘I should have done it a long time ago, [so] I’m going to do it right now.’”

Boettcher formed Nighthawk Graphics in 2006, starting in his garage. He immediately began offering most of the services United Team Elite still offers today, such as screen printing, embroidery, heat press, custom artwork and more. A one-man operation, he also oversaw all the sales for the company.

About two years into his new venture, Boettcher met Troy Russell, who owned Sports Warehouse. Russell has lived in the Mankato area for most of his life and has been in the retail business for almost 30 years. He started when the River Hills Mall opened, running a retail store called Athletics North. In the late 1990s and early 2000s, he co-owned a retail store called In the Game, and he also later ran a liquidation tent sales company. In 2007, he moved back to Mankato and partnered in a crop insurance business for 12 years, selling it in 2018.

In 2011, Russell started Sports Warehouse, selling apparel to area teams, but he didn’t have anyone to produce his apparel.

“Based off my experience with In the Game, I knew that when I started Sports Warehouse in 2011, I wanted to control my own production,” he said.

The two business owners met through a mutual work contact and began working together. Gradually, they moved into one location, running their separate businesses side by side, until the two of them decided to make things easier and just combine the two companies into one.

“After about four or five years of working together in that capacity, we thought, ‘Well, why don’t we just do this together?’” Boettcher recalled. “Because he was a really good sales guy and I had all the production and art background. We actually make a pretty good team.”

Once Boettcher and Russell decided to form United Team Elite in 2014, they relocated from their former building on River Front to their current space on Lookout Drive in North Mankato. The building they bought was an open warehouse that had been used to park trucks before, and Boettcher designed an entirely new interior for it. They did most of the renovations themselves.

“We did a lot of sweat equity in this building,” Boettcher said.

Since 2015, the business has grown exponentially. They currently have 20 employees, with plans to hire two more production positions in the near future, and they also make use of 10 outside salespeople. Meanwhile, they work with clients from all across the country. They’ve shipped products to locations such as Hawaii, California, Texas and even Canada. This is possible thanks to partnerships with larger organizations that can offer a wider coverage area.

In fact, Boettcher said that United Team Elite has been going up against some national companies, such as BSN Sports, one of the largest sports apparel companies in the country.

“As we grow, we take on a whole new set of competition,” Boettcher said. “We’ve gone up against BSN a couple times and actually beat them out for the bids. I think most of it would be our customer service, and our websites and systems we have in place. Also, I’m not going to lie—my artwork has a lot to do with it. A lot of companies like us don’t have artists to pull off the things that we do.”

On top of their game

According to Boettcher, there is “a lot more” to running a sports apparel business than people think. Everything is done in-house, from the design element to the final printing. Sometimes, a customer will come with an idea of what they want, or even a ready-made logo, such as when a school or company approaches them. Other times, Boettcher starts entirely from scratch.

“You think someone comes in and wants shirts, and you print shirts, but actually, here, we get so many orders that we have to be really efficient,” Boettcher explained. “We have to have systems in place for everything that we do so things aren’t missed, so we do things on time and in a timely manner.”

While there used to be “slow times” in January and July, he said that isn’t the case anymore.

“That’s really unusual for people in our industry, but we don’t have them,” he said. “It just goes from super busy to out-of-control busy.”

He added that a huge part of their business is a focus on excellent customer service.

“Without customer service, you’ll never get anywhere,” he said. “And that’s why we excel in our market place right now. You come in the door, you’re going to get a friendly smile, we’re going to talk to you, and we’re going to make you feel like you’re important.”

When it comes to the equipment they need to do their job, Boettcher said they’re lucky in that most of what they use will last for years with proper maintenance. However, the one thing that needs constant updating is their computers.

“Everything now is computer-based,” he said, “and as years go on, the computers get slower. I just got another new one because my computer couldn’t handle the art programs that I was doing anymore.”

While United Team Elite has been offering the same services since it began, just on an ever-expanding scale, Boettcher said a growing trend in his industry is the emphasis on promotional products.

“We have literally thousands of vendors we work with for promotional products,” he said. “That part of the business has been growing. We used to just dabble in it, but now it’s an important part of our business. I think people are using promotional stuff more than they used to.”

Meanwhile, Russell said one challenge their business faces is a lack of available employees.

“Our potential growth is slowed by a lack of available skilled labor force,” he said. “Sales growth opportunities are unlimited, but producing the decorated product is the challenge. The companies that continue to grow and embrace technology will have the best chance of success in the future.”

He added that he and Boettcher are working on several initiatives to become more efficient, such as upgrading their production processes and tooling so that they can produce more units each week.

The co-owners also opened a second location in Cumberland, Wisconsin. Russell’s father used to have a trucking company in the area and had an unused warehouse and parking lot. Boettcher designed a new layout, and Russell’s sister and her husband run it.

“It was always our business plan to grow through satellite locations, but it wasn’t our intention to open our first one three-plus hours away,” Russell said. “Initially, it was a major adjustment, but similar to all aspects of our business, we keep changing and improving.”

The business duo plans to open more satellite locations, according to Russell, saying the hope is to eventually have up to eight stores. He added that they’re also working on creating more strategic partnerships that will expand the company’s footprint on the West Coast and southeastern United States.

“We are implementing many new initiatives for growth in the future,” he said. “Ultimately which direction we go will be dictated by market and economic conditions.”