Dems rally around abortion. Are they reaching B…

Biden steps out of the room and finds legacy-de… 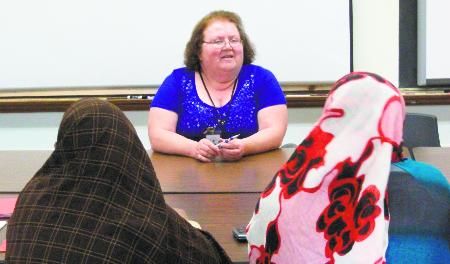 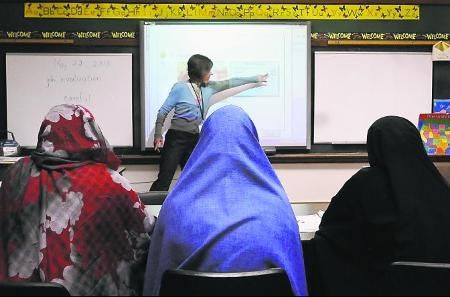 Clarice Esslinger is an English as a Second Language teacher through Adult Basic Education. Many of her students are Somali women.

Clarice Esslinger is an English as a Second Language teacher through Adult Basic Education. Many of her students are Somali women.

Just before noon in a second-level stairwell of the Lincoln Community Center, a Hispanic couple sits together, sharing a sandwich and a quiet moment away from the commotion.

Nearby, dozens of Somali women are conversing in a main hallway, some making their way to a math class taught by Joni Gilman. One of the lessons of the day? Multiplication by 0 and 10, which — when language is a barrier — can be tricky business.

School days here at the Lincoln Community Center are like international festivals — people from 44 different countries coming to learn as much as they can to acclimate to their new home in southern Minnesota. And it's quite a process, said Audra Nissen-Boyer, Mankato Area Public Schools Community Education and Recreation director.

“As an adult, if we had to learn everything about a culture it wouldn't happen overnight,” she said. "When you come to a new culture, there's an enormous amount of responsibility on your shoulders, so much you have to figure out.”

The Lincoln Community Center has been the place many immigrants and refugees have come for years to get a jump on that process in Adult Basic Education classes, part of the Mankato school district in the Community Education and Recreation department.

In the late 1990s the first Somali woman walked into the Lincoln Community Center, the start to a population boom of East African refugees to the Mankato area. Nissen-Boyer said it's unclear what initially attracted east Africans, many from Somalia, to Mankato.

But Hassan said the families kept coming mainly due to word of mouth. Many Somalis who have moved to the area in recent years are related to or know other families already living here.

Hassan said education is a top priority to many refugees and immigrants, most of whom did not have the option to go to school in their native countries. And Mankato has a reputation of offering a great deal of educational opportunities to both children and adults, he said.

From 2000 to 2010, the non-white population of Blue Earth and Nicollet counties increased about 50 percent, from 3,188 to 4,770. Most of the growth is from refugee and immigrant families. And with that growth has come a boom in enrollment for ABE classes.

In the past two years, enrollment has gone up 20 percent. In five years — since the 2008-09 school year when enrollment was 761 students — participation went up 32 percent, to 1,008 students this year.

Adult Basic Education includes such programs as English as a Second Language (ESL), General Educational Development (GED), College Prep and FastTRAC, which addresses the skills gap in the in-demand areas of the workforce.

On average, about 275 adults are enrolled in ESL in a school year.

Community and school liaisons, city and county officials working with new families, and fellow immigrant families in the community are quick to direct new arrivals to Lincoln to begin their education.

As the vast majority are women from East Africa, for many enrolling in adult education is often their first experience in any kind of schooling. And the stories of how many of these women got to Mankato are heartbreaking — raising children in refugee camps, husbands killed during civil war, families separated because there was only enough money for some of them to flee.

“Some say they never had a good sleep until they came to Mankato,” said Hassan, who works to help stabilize the immigrant community by conducting home visits, referring resources, holding community meetings and offering conflict arbitration and translation services.

Hassan and others do a great deal of social work for immigrant families out of the Lincoln Center, he said. They work with K-12 teachers to help immigrant parents ask questions and communicate, they work out landlord issues, they educate about police and rescue services, and they answer questions about cultural differences and expectations. “It's a one-stop shop,” Hassan said of Lincoln.

Hassan said any effort to take stress and worry away from parents aids in their education. Children only have to worry about being a student, he said. In the midst of learning a new language and culture, parents have to worry about paying rent, preparing meals and raising children, among other things.

But for a few hours every day, many immigrants are happy to have the opportunity to learn.

Besides various levels of ESL classes, the program offers classes for family learning and parenting, citizenship, technology and driver's education, among other thing. There's also a diploma program in which students can work toward a Mankato Area Public Schools diploma.

Parents with young children learning English can enroll them in Lincoln Logs Learning Center preschool, funded by United Way, although the program has a waiting list. ABE student Fatima Shoria waited a year to enroll herself in classes at Lincoln until a spot in Lincoln Logs opened up for her preschool-age son, Idiris.

There are also waiting lists for ESL, so when there isn't a spot available, students are invited to go into the computer lab and engage in digital learning programs until the next quarter begins.

Results of tests at the end of each quarter show when ESL students are ready to move up to the next level. The speed of progress varies from person to person and depends on such factors as previous exposure to schooling.

“Some have never held a pencil before,” said Clarice Esslinger, ESL instructor.

The ESL classes do not have interpreters, and instructors speak English. Students in a class together may speak Somali, Anuak, Chinese, Spanish or a number of other languages. And the classes are filled with almost all females.

“The majority of the fathers are missing. … Sometimes dad's not here,” Hassan said, adding that the men who are with their families in Mankato often pick up English at their places of employment and then come to ABE later to further their education.

“If they start working immediately, they can get by with 'survival English,'” said ESL instructor Liv Musel-Staloch. “But they might reach a point in those jobs where they can't progress anymore.”

Esslinger remembers a man coming to Lincoln having been inspired by his supervisor. The supervisor was also an immigrant who had received his diploma through ABE, which is why he had been promoted.  “He learned it was possible to progress,” she said.

Transportation and child care are two challenges that stand in the way of some immigrants and refugees enrolling in ABE classes. Nissen-Boyer said public transportation doesn't go everywhere, including low-cost housing areas where many diverse families live. And the Lincoln Logs Learning Center is always at capacity, meaning wait times for enrollment can be up to a year.

Still, there are plenty of success stories. Somalia native Ahmed Mohamed, for example, had been separated from his wife and daughter for eight years before he rejoined them in Mankato in August last year, emigrating from South Africa. He started taking advanced ESL classes in February, and in April passed an exciting benchmark: qualifying to start preparing for his diploma and College Prep classes.

Shoria has progressed one literacy level in just a few months and is thrilled to be able to spell her name and her children's names.

Hassan himself is a success story, helping to serve as role model for so many Somali immigrants moving to the area. Fluent in four languages and possessing a law degree from an Italian university, Hassan learned how difficult it was to be successful in the U.S. without English.

He worked in a fast-food restaurant and he drove a cab, among other things, before learning the language and becoming a U.S. citizen. Through various jobs he worked his way up to a staff position with a U.S. congresswoman from Georgia.

Eventually moving with his family to Mankato a few years ago, Hassan enjoys his job at Lincoln, helping immigrants learn all that he did, but a lot more quickly.