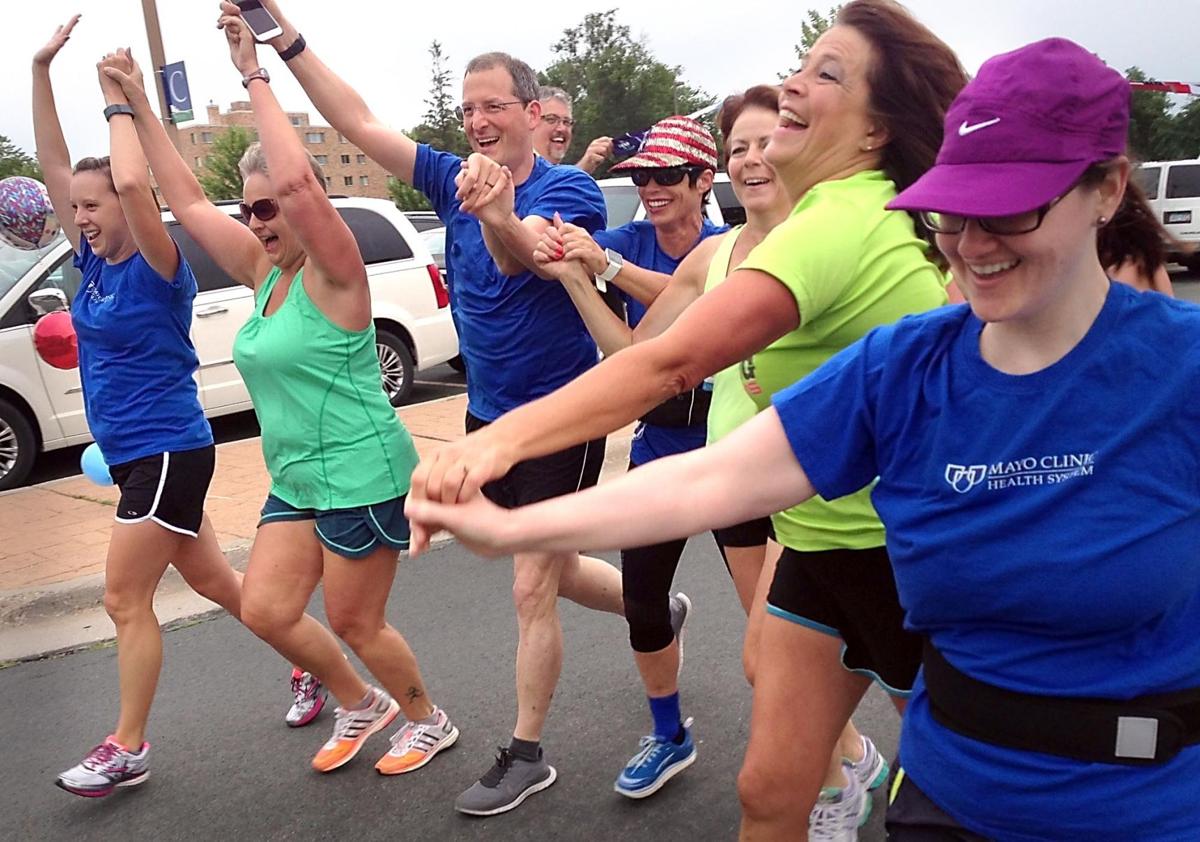 Mayo Clinic Health System staff complete a 2K run Wednesday morning with Helene Neville (in the American flag hat), who is running across the country. Photo by Nate Gotlieb 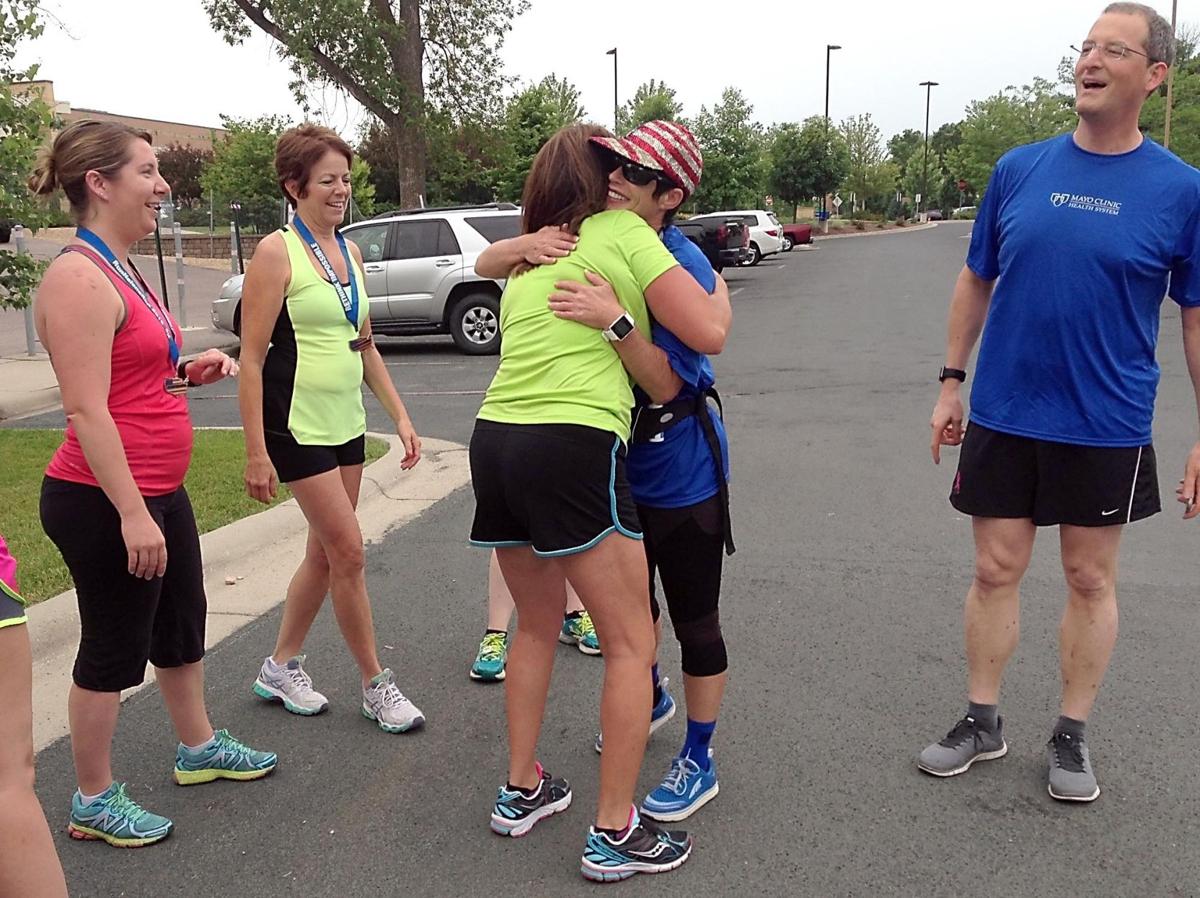 Helene Neville (in the American flag hat) hugs a Mayo Clinic Health System staff member after a 2K run Wednesday morning. Neville is jogging from the East Coast to the West Coast. Photo by Nate Gotlieb

Mayo Clinic Health System staff complete a 2K run Wednesday morning with Helene Neville (in the American flag hat), who is running across the country. Photo by Nate Gotlieb

Helene Neville (in the American flag hat) hugs a Mayo Clinic Health System staff member after a 2K run Wednesday morning. Neville is jogging from the East Coast to the West Coast. Photo by Nate Gotlieb

MANKATO — Helene Neville started running marathons, mountain climbing and body building after she was diagnosed with cancer in an effort to create positive memories by which her sons could remember her.

More than 15 years later, she's on the verge of completing a journey only four others have finished: a run across the entire perimeter of the U.S.

Neville, a longtime nurse, ran through southern Minnesota this week during the fourth and final leg of her five-year journey.

She spoke to nurses at Mayo Clinic Health System on Tuesday night before a short run with several hospital employees Wednesday morning.

"This whole run isn't to realize some dream I had," Neville said, "It's to inspire others to realize theirs."

A Philadelphia native, Neville worked as a nurse for many years in Iowa, started a health-coaching business and founded the Des Moines Marathon. She was diagnosed with Hodgkin's lymphoma in 1993 and underwent three brain surgeries, chemotherapy and radiation.

Neville signed up for the Chicago Marathon in 1998, the first of more than 20 marathons she has run. In 2009, she decided to embark on her cross-country journey in part to honor her mom, who died of cancer in 2002.

She covered 2,520 miles in 93 days during the first leg of her journey in 2010, going from California to Florida. Neville ran the West Coast in 2013 and the East Coast in 2014 after a cancer relapse forced her to delay the trek for two years.

Neville began the final leg May 1 in New Brunswick, Canada, and said she hopes to finish in Washington by early September. She's about halfway through the more than 3,500-mile east-to-west stretch, which will take her across 17 states in the northern U.S.

In total, she will have covered about 9,700 miles by September.

Neville runs at least 25 miles each day, stopping at hospitals, schools, cancer centers, and fire and police stations along the way. She said she draws motivation during the tough moments by remembering the dedication and determination of nurses.

"If they can stick through that shift, I can sure as heck stay out here for 25 miles," she said. "... It's easy compared to trying to tell somebody how ill they are or lifting them from the bed to the chair."

Neville said the hardest part of the 2015 run was the first stretch, when she was running across hills on the East Coast. She said she's enjoyed the relatively flat terrain in the Midwest.

The people in Minnesota have been especially friendly, she said. She's crashed two birthday parties here and received a motorcycle ride from woman on a Harley-Davidson. In Byron, the running club jogged along with her for a portion of her run.

Neville, who resides in Nevada, has written several books about her trips and the people she's met along the way. She said she plans on writing a fourth after her journey ends and also said she's considering different kind of run — for the Nevada State Assembly.

Mankato hospital staff appeared impressed with Neville's dedication and determination. Dr. Stephan Thome said it proves how people can be fit at any age.

"I just keep coaching myself the whole time out there," Neville said. "It's painful sometimes, but I'm on a mission."