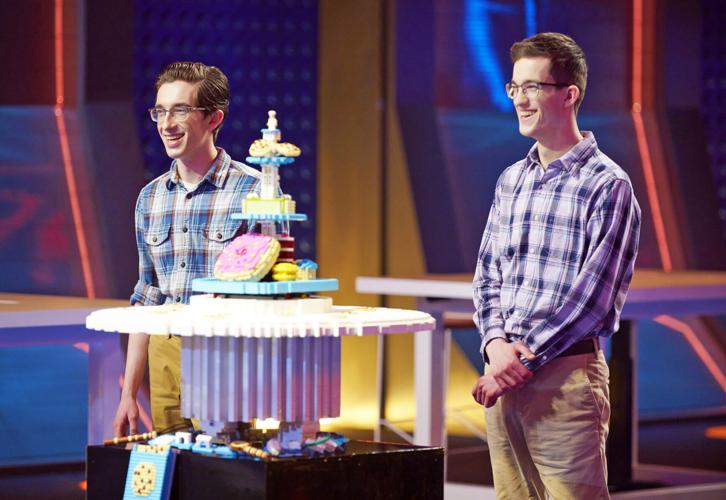 Contestants Caleb Schilling (left) and Jacob Schilling are judged on the chef hat topped with goodies made out of Legos in the “Hats Incredible” episode of “Lego Masters.” 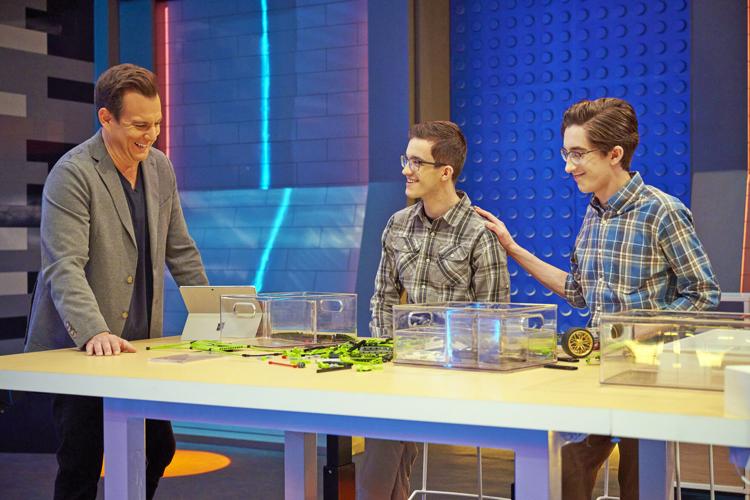 (From left) host Will Arnett checks in with contestants Jacob and Caleb Schilling in the “Demolition” episode of “Lego Masters” to air at 8 p.m. next Tuesday on FOX. 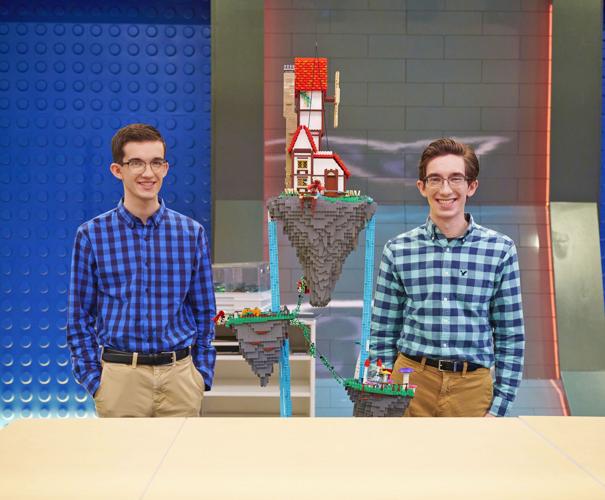 Jacob and Caleb Schilling created floating islands in a “Lego Masters” episode that aired last week that challenged contestants to build off of one Lego brick suspended in the air.

Caleb Schilling had to pass on his first invitation to audition to build works of art out of Lego bricks on national television.

To compete on the first season of “Lego Masters,” Caleb would have had to give up his scholarship to study media arts at Bethany Lutheran College.

But the pandemic brought Caleb and his twin Jacob a second chance at landing a spot on the Fox reality show.

The brothers from Holman, Wisconsin were finishing their college classes remotely when “Lego Masters” casting staff came back with an audition invitation for the second season.

“I told Jacob let’s drop everything and make it happen this time,” Caleb said.

The brothers made the cut and spent March in Atlanta studying during breaks from building and blowing up Lego creations.

Now Caleb is a new Bethany graduate preparing to get married and move back to Mankato next month while his face is on national television.

“It’s surreal and pretty cool to relive those moments and see them from a different perspective,” he says of re-watching his experience.

Each episode there is new challenge for the 12 teams placed in a room with 5 million Lego pieces.

“It’s impossible to convey the feeling of walking onto that set,” Caleb said. “The scale of the whole operation is incredible.”

While the brothers are both experienced builders, Caleb said the timed contests in front of cameras going up against other builders they have long admired was “incredibly nerve-racking.”

“I’m used to working on builds for months or years, whenever I feel inspired,” he said.

The twins are not allowed to tell anyone how far they made it in the contest, which eliminates one pair of contestants each week. Even Caleb’s soon-to-be-wife doesn’t know if their wedding expenses might be covered by the $100,000 grand prize.

“It’s become a fun secret that Jacob and I have,” Caleb said.

The Schillings have survived through at least the first five episodes that have already aired. They’ve made a miniature parade float, floating islands, a chef hat, a tower that was shaken to pieces and exploding UFOs.

The tower that had to withstand a mock earthquake was the biggest challenge for the brothers.

“It was the largest build in the shortest amount of time,” Caleb said.

The twins used Lego rubber tires in the base of their 4-foot-tall tower hoping the rubber would absorb the shock of the quake. The idea might have worked if they’d devoted more time to building a stronger connection between the base and tower of the building.

“It was a turning point. We got a taste of death there in the bottom three,” he said.

Although their plan didn’t work as well as they’d hoped, Caleb said it inspired them to be more willing to take risks.

“There are builds we’re not fully proud of. But we learned from the experience,” he said.

The earthquake challenge and another requiring the contestants to blow up their creations got mixed reactions from Lego enthusiasts. Some were not happy to see creations destroyed.

“I’m in the camp of ‘I’m totally happy to see it hit the floor,’” Caleb said.

Their Lego masterpieces were too big to bring back home on a plane anyway. Caleb is back at home in Wisconsin for a few more weeks before moving to Mankato with his new bride, who is an admissions counselor at Bethany. Caleb is now working full time as a video game designer.

It’s not the first time the Schilling brothers’ Lego-building skills have earned them a trip into the spotlight. At age 12 they earned a free trip to Hollywood to compete in a Harry Potter-themed Lego contest. As winners of that contest, they earned a trip to New York City where they got to meet the actor who portrayed Harry Potter. National media coverage of that feat is what caught the attention of “Lego Masters.”

Caleb has also showed off his replica creations at conventions and a toy store in Chicago. Jacob took a break from Lego building but got back into it during the pandemic. They have some 400,000 blocks in their parents’ basement near La Crosse.

The brothers now are fielding invitations to appear at regional Lego conventions.

“It’s a strange position to be in but quite humbling too,” Caleb said.

Caleb hopes to use his brush with fame to help change perception that Lego products are a toy for children. The plastic bricks can be used by people of all ages to create art, he said.

“It really is a form of art and an outlet for creativity,” he said.

“Lego Masters” airs at 7 p.m. Tuesdays, except for July 13 and 27 and Aug. 3. The first five episodes of the second season can be viewed on Fox.com or streaming services including Hulu.