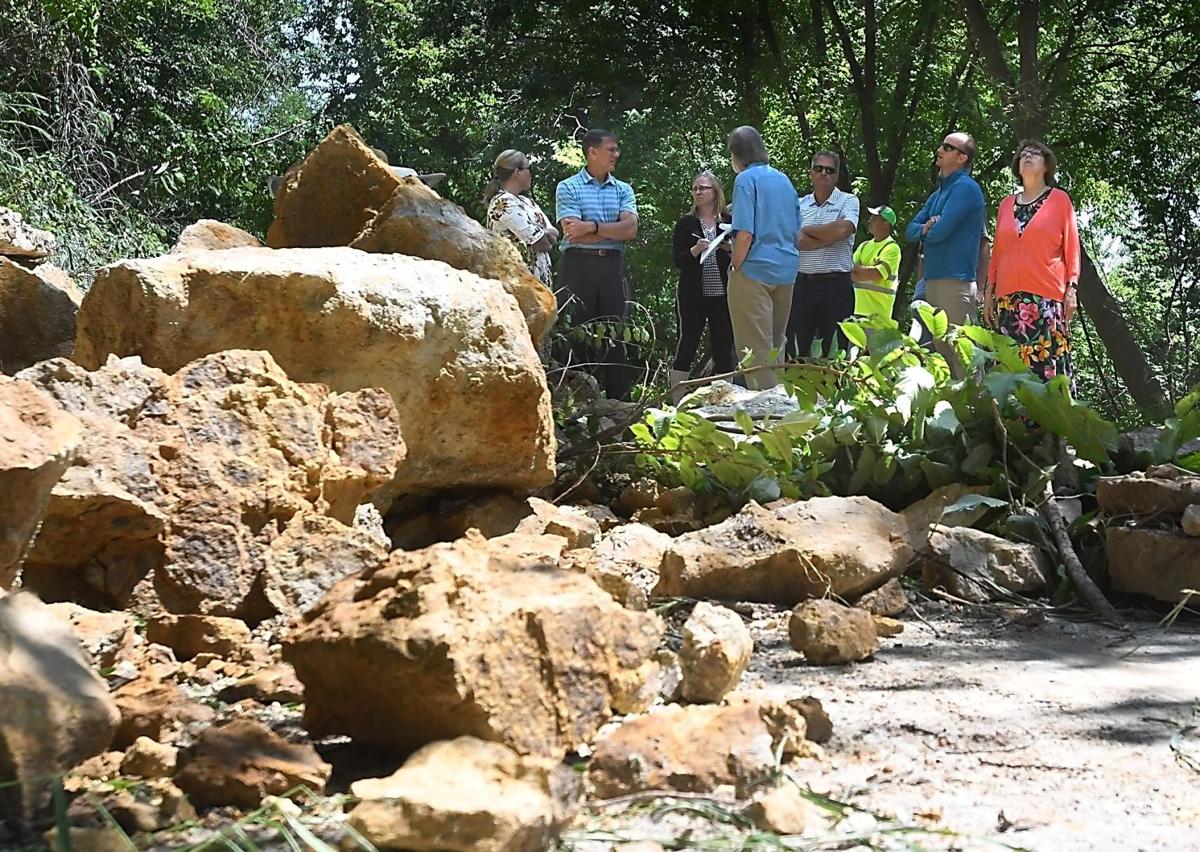 The North Mankato City Council and city workers look over a pile of boulders that fell onto Judson Bottom Road in the spring. The road was closed much of the spring after the boulders fell onto the road in March. 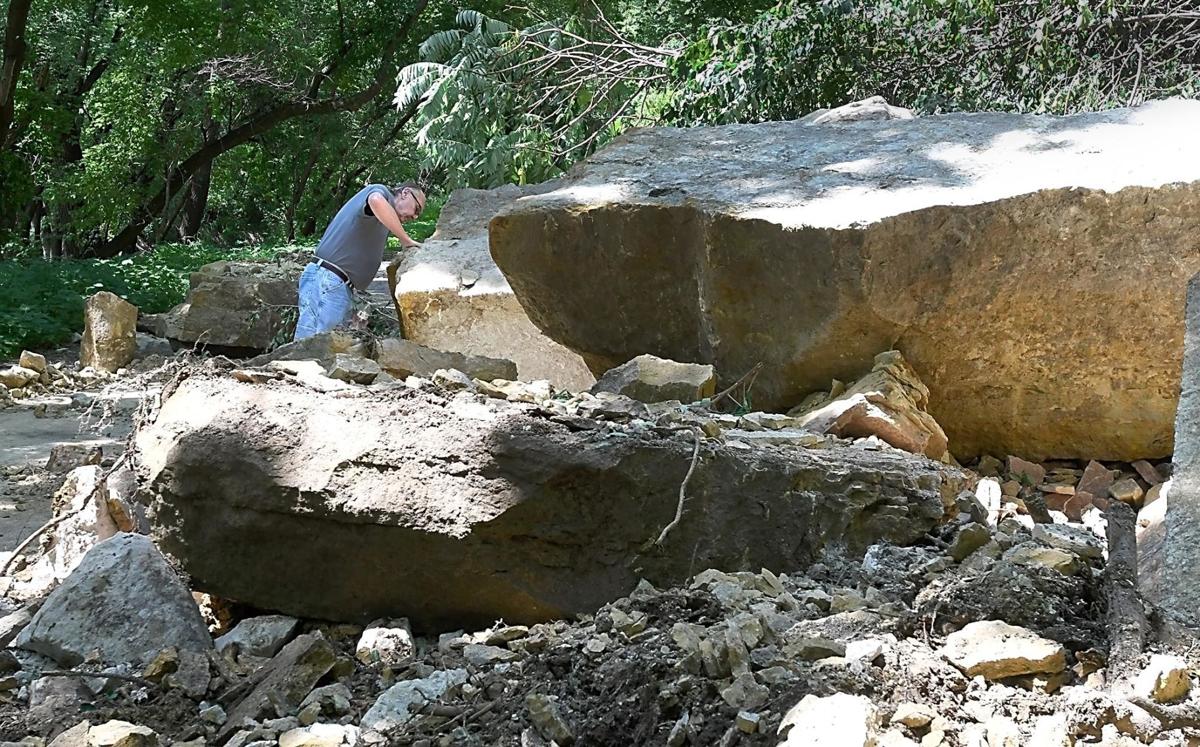 North Mankato City Council member Jim Whitlock examines the size of the limestone boulders that fell onto Judson Bottom Road during the weekend.

Public Works Director Nate Host (left) and North Mankato Mayor Mark Dehen discuss a pile of boulders that fell onto a closed portion of Judson Bottom Road due to last weekend’s storms. The North Mankato City Council toured the area Monday and will decide whether to reopen the road to vehicles or turn that section into a pedestrian path.

Trees are strewn across the asphalt at Judson Bottom Road.

The nearby bluffs look like someone took a giant ice cream scoop to them in several places. In others, fallen boulders and rocks have formed a lip on the top of the bluff.

While a portion of the road has been closed since the spring, the weekend’s severe weather displaced several tons of limestone boulders, transforming them and the roadway into an obstacle course.

Those ongoing landslides and falling boulders due to wet weather is forcing the North Mankato City Council to consider whether to keep Judson Bottom Road open to cars.

Council members and city officials toured the closed portion of the road Monday afternoon, where landslides had covered the road in at least five places before workers cleared it to make room for the tour.

North Mankato regularly closes Judson Bottom Road in the spring due to flooding. Yet boulders and evidence of large landslides between Valerie Lane and the bottom of Lookout Drive spurred city officials to study the nearby bluffs before opening the road once more.

Area consultants examined the bluffs earlier this year and offered some temporary solutions to the ongoing erosion problems. For example, the city could coat the bluffs with liquid concrete to act as a buffer.

Yet there’s no long-term solution that would guarantee residents’ safety when traveling down that road. While stormwater doesn’t naturally run off into Judson Bottom Road, all that precipitation is getting into the rock, eroding the bluffs from the inside out.

As Minnesota continues to get increasing amounts of annual precipitation, the bluff’s erosion problems look to only get worse.

“It looks like it has a lot of danger potential,” Council member Diane Norland said.

Council member Sandra Oachs agreed. She said she was concerned rocks could fall as people were out and about on the road.

“The stability here scares me,” she said.

No one on the council wants to permanently close off the roadway, but Mayor Mark Dehen said the council needs to decide whether to reopen the road to vehicles or to maintain it as a pedestrian/bike path.

“We’ll have to decide what the effort is going to take and how we’ll address it,” he said.

On a positive note, Dehen and City Administrator John Harrenstein said some of the boulders would likely make great play features at city parks or could be sold to landscapers.

City officials can agree on one thing: The road will likely be closed at least through the summer, if not longer depending on whether workers need to clear a path for organized bike rides in the fall.

Harrenstein said the city likely won’t make any large-scale efforts to fix the bluffs this year, even if the council decides to blast parts of the bluff to reduce the chance of falling boulders.

As the situation stands, each new storm could cause even more landslides. Public Works Director Nate Host noted two large boulder piles that had fallen since severe thunderstorms rolled through the region Saturday.

Judson Bottom Road is a lone example of the kind of problems Mankato and North Mankato may face in the future. A group of Minnesota State University researchers completed a study over the past year that found almost 500 examples within the greater Mankato area of land- slides, mudslides and rockfalls, which will only become more common due to increasing precipitation and more severe weather events.

North Mankato is embarking on a plan to maintain more of its ravines and cliffsides after city workers have found more evidence of erosion in recent years.

City workers surveyed all ravines south of Highway 14, including the area near Judson Bottom Road and found erosion issues in several places. Last week, the council approved a $710,000 bid from R & R Excavating for the first phase of a major erosion repair project at the ravine near the North Ridge neighborhood.

NORTH MANKATO — Judson Bottom Road hasn’t had nearly as many issues with large boulders and landslides this year as it did in 2019.