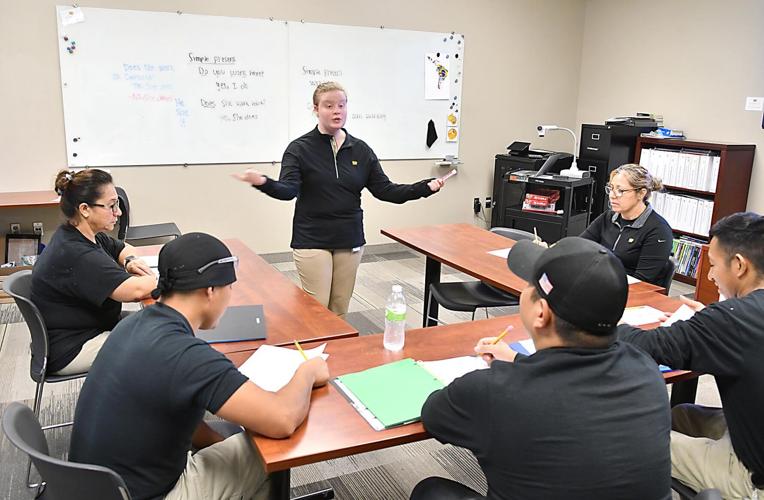 Instructor Katie Holten works with Cambria employees learning English as a second language. Cambria has been offering on-the-clock English classes to non-native speakers who want to learn. Most of them are offered the opportunity during new hire orientation. 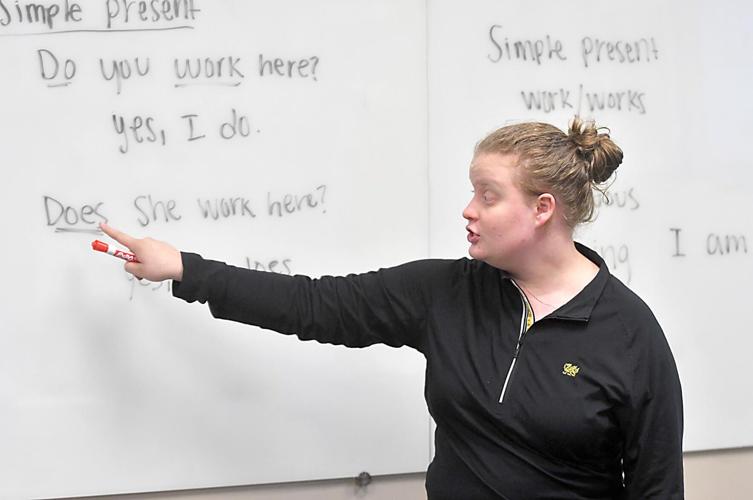 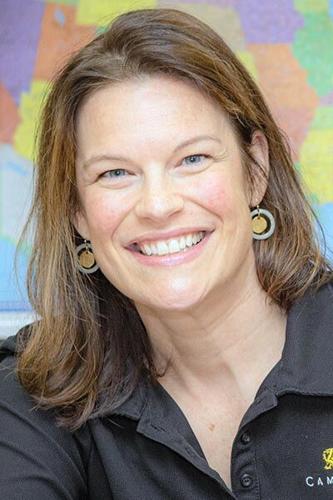 Instructor Katie Holten works with Cambria employees learning English as a second language. Cambria has been offering on-the-clock English classes to non-native speakers who want to learn. Most of them are offered the opportunity during new hire orientation.

The English language wasn’t completely new to 33-year-old Julie Tolzman when she arrived in the United States seven years ago.

The Philippines — her country of origin — teaches English in schools, but she said the pronunciation of words are different on the island and Tolzman still wasn’t a pro at it herself.

But in the span of about eight months, that all changed.

Tolzman’s ability to speak and comprehend the language is near fluent now, and it’s all thanks to Cambria — a Le Sueur-based company that produces quartz surfaces — and its English program.

The program was created in 2015 after CEO Marty Davis took a walk through the plant and noticed a handful of workers were only speaking Spanish to one another.

Davis didn’t see that in and of itself as a problem, but their inability to speak English struck him as something that would be a barrier to their success and ability to move up within the company.

“He felt like we need to do something because otherwise that group of individuals are going to be stuck in positions and they’re not going to be able to excel,” said Brian Scoggin, executive vice president of operations at Cambria. “So, he got a hold of myself and the plant manager at the time and told us to hire an English teacher.”

The two did just that.

Kamille Kolar of the University of Minnesota was interviewed by Scoggin to become their plant’s first English as a second language teacher.

“The vision was we were going to start up English-speaking courses at the plant here to teach the language,” Scoggin said. “At the time, our workforce was at 650 and probably 300 were non-English speakers. She understood the vision very clearly in terms of us wanting to teach them and invest in them.”

From then on, Cambria has been offering on-the-clock English classes to non-native speakers who want to learn. Most of them are offered the opportunity during new hire orientation.

Though how the classes are done has changed slightly throughout the years, the mission remains the same: Teach employees the language to ensure their success within the company and in their day-to-day lives.

Scoggin even said that, due to the program, an entire department was entirely wiped out because the employees who used to only be able to work in that department were able to receive more training upon learning English and have since been promoted.

Rather than simply prepping and cleaning the line, those employees have been offered different roles and have received an increase in pay by accepting them.

Mario Martinez was one of them.

When he began working at Cambria six years ago, he could only speak Spanish. After five years in Cambria’s English program, he’s now able to communicate in English well enough to be promoted as a maintenance technician.

Martinez, 30, said he is confident in his abilities and continues to practice his skills at work in day-to-day conversations with his supervisor.

“Because of the program, we don’t have a department anymore that pigeonholes people into one department,” Scoggin said. “We’re able to cross-train them.”

When Tolzman began working at Cambria almost two years ago, for example, she was hired as a quality control inspector. She has since been promoted to quality control lead. Her ability to effectively communicate with others at the company helped her land that role.

Tolzman said her ability to speak English not only advanced her career but boosted her overall confidence.

She noted she couldn’t believe it cost her nothing because the classes are fully paid for by the company. In fact, employees are paid to attend them. They work with their supervisors to allocate time during their shifts to attend their English classes while punched in the entire time.

“We didn’t want to make it a burden,” Scoggin said about the reasoning behind offering classes during an employees’ shift rather than before or after. “We wanted it to be a positive thing for them.”

To get into a class, employees take a standardized placement test which, based on their scores, divides them into five different levels. As their English progresses, they move onto the next level. After completion of level five, they graduate from the program.

As of right now, there are three classes taught by qualified ESL teachers. Levels one and two are combined into one class, level three is its own class, and levels four and five are combined.

Class sizes vary but all are held in a designated classroom in the plant.

“That’s what’s neat about our program now. It’s part of our fabric,” Scoggin said. “It’s a live program right in the plant. It’s embedded in our culture in terms of who we are.”

They even have programs that involve supervisors.

“We’re working on getting everyone in the plant to be a teacher because we don’t want the learning to stop when they leave the classroom,” said Bridget Prehn, newest lead of the program.

The 7-year-old program, while it had to undergo some changes, carried on through the pandemic. The plant itself shut down during the pandemic, but the English classes continued virtually through Zoom.

“It was a little bit of a setback for the language program when you really want to have that face to face, in-person contact,” Prehn said.

Regardless, both Prehn and Scoggin agreed that virtual learning made everyone work smarter and gave the students more resources to do some learning on their own.

Prehn agreed, saying a big part of their mission is to help students understand what’s available to them outside of the classroom.

However, learning from a qualified teacher in a classroom is still the company’s preferred method. So, since June 20, the program has been slowly transitioning back to full in-person classes.

“It’s still a relatively new welcome back program,” Prehn said. “During COVID, it was all distance learning. It was a lot of independent stuff. We had to really cut back on who was involved in it just to accommodate COVID restrictions.”

Back then, contact hours were limited to 30 minutes a week with one-on-one instruction. Now, they’re up to one hour a week and students are combined into a cohort. Rather than learning individually, they get to be around other students on the same level as they are.

A class taught by Prehn on Sept. 8 included three Spanish-speaking students who seemed to enjoy the company of their peers.

Rather than sitting quietly, listening to a teacher speak, the students engaged in conversation with one another about the topic they were learning about.

The three men cracked jokes, eagerly answered Prehn’s questions and seemed genuinely excited to be there.

Prehn used the energy in the room to get the students to practice what they’ve learned firsthand by having short conversations in English and playing interactive learning games.

When words weren’t enough, Prehn used body language to help communicate what she was saying in English, despite being fluent in Spanish herself.

When the students caught on, the conversation continued.

“We want to make sure that they’re competent in the language not just from taking a standardized test, but that they also know how to use the language in an authentic context,” Prehn said. “So part of the graduation requirement is showing us they can take a test and can also perform real-life applicable tasks with the language that they’ve learned.”

So far, about 300 students have gone through the program since it started. More and more students are in the process of completing it, eager to advance their professional and personal lives.

The next set of graduates are set to walk across the stage in October, Tolzman and Martinez included.

“The program is an excellent addition to the company,” Tolzman said. “I’ve worked with some people that don’t speak much English so this would be a good opportunity for them if their company had the same program Cambria has.”

Eloise Goldman, a Cambria representative, hopes that others follow in their footsteps for the reasons Tolzman mentioned.

“It’s certainly something we’re so proud of, but what would be better is companies all over America instituting this kind of program for their non-native English speakers,” she said. “We hope to be a role model in that regard. We want other companies to follow suit.”