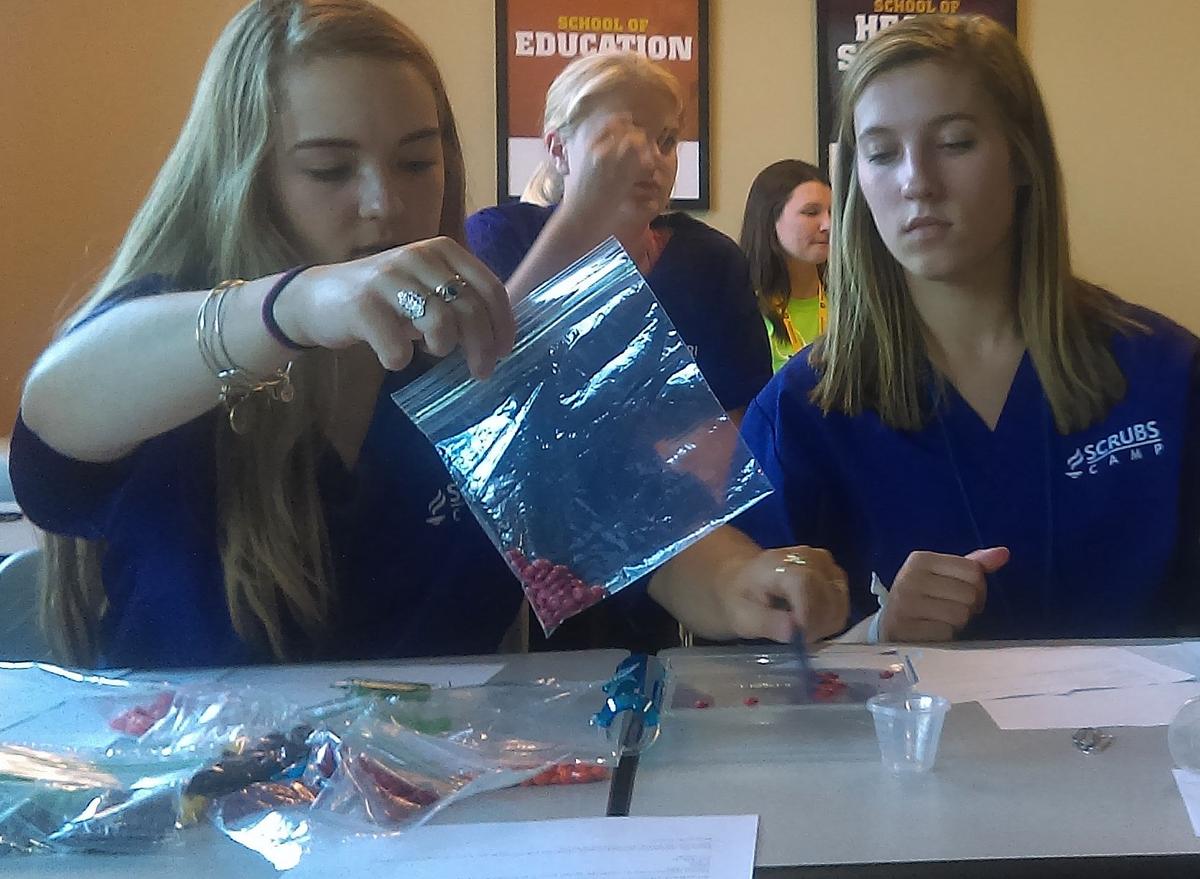 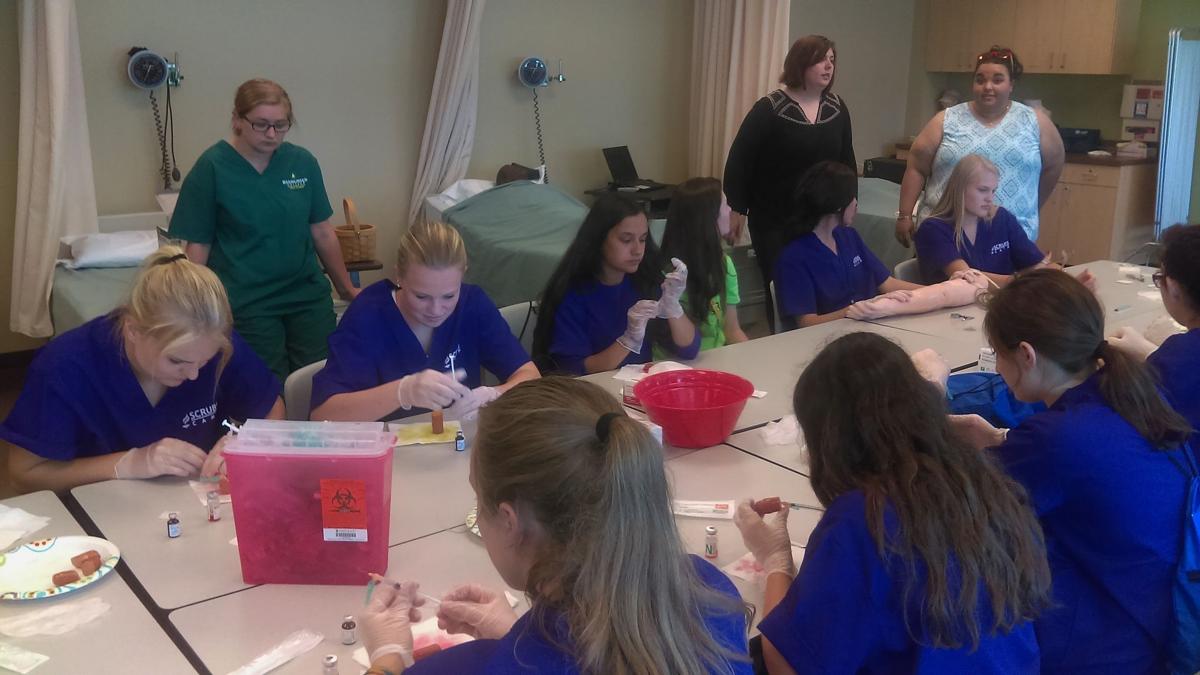 On the first day of Scrubs Camp, most of the high school campers say they want to become a doctor or a nurse.

By the last day of camp, HealthForce Minnesota Executive Director Valerie DeFor said many change their answer to a something more specific, like pediatric cardiovascular surgeon or pharmacy technician.

DeFor said Scrub Camps, held across the state each summer, aim to introduce high school students to vast variety of health care fields available to them.

During this year's Mankato Scrubs Camp, which concluded on Wednesday, approximately 60 students visited area medical clinics, a hospital and colleges and a university while they learned about health professions ranging from sports psychology to dermatology.

Rachel Seibert, an incoming 11th-grader from Lakeville, came to camp thinking she'd like to become either a psychologist or work with children with special needs. After the camp she said she could also see herself becoming an EMT, a surgical nurse or an OB-GYN.

She'd also ruled out a few health care careers as definitely not for her, she said. Those fields included audiology, after she was “grossed out” by a session during which she looked in another camper's ear and saw video of bugs being removed from ears.

Numerous area educational institutions and health care organizations came together with Health Force Minnesota to host portions of the three-day camp and provide funding and other support.

“It is really a collaborative effort. Without all the partners this wouldn't happen,” said Rasmussen College Mankato Campus Director of Admissions Gwenn Wolters, who served on the camp planning committee.

Sisters Maya and Katelyn Sarkar of New Ulm both said the regenerative research session was the highlight of the day. Randy Daughters brought frogs, embryos and even a glow-in-the-dark axolotl to give campers a taste of the work he does as director of the Minnesota Regenerative Medicine Education and Outreach Program. Students even got to fertilize frog eggs.

Katelyn, a New Ulm High School sophomore, said she was fascinated by the limb regeneration capability of some animals and the idea that research with those animals could someday be used to regenerate human body parts.

She said regenerative medicine is now in her top three prospective career fields, along with medical engineering and wildlife biology.

Maya is headed to the University of Minnesota Twin Cities and neuroscience is her top interest, although she's also now considering regenerative medicine as well as orthopedics and sports medicine.

At the hospital, campers visited hands-on learning stations that included opportunities to try skills such as assessing vital signs and experience hospital operations such as how to properly garb up to go into an operating room.

In the Hanger Clinic, Certified Prosthetist-Orthotist Michael Schulenberg explained the difference between his two services in lay terms.

“Orthotics is the bracing of body parts that you still have and prosthetics is replacing the body parts you no longer have,” he said.

Over three-fourths of amputations are related to diabetes and less than 1 percent are the result of military combat, campers learned. Schulenberg showed the visitors different types of braces and prosthetics, including a knee joint with a computer inside to provide almost natural movement.

“You wouldn't know that they're an amputee when they're walking because technology has come so far,” Schulenberg said.

Seibert and both Sarkar sisters said the highlight of the day was the presentation from Mankato Clinic Health Systems OB/GYN Mark Taylor. He brought with him a placenta from a woman who had given birth earlier that day. He did an ultrasound on a woman who was in her third term of pregnancy.

Taylor concluded his presentation about obstetrics by quizzing campers about reasons why C-sections can be necessary. Most commonly, students learned the baby is too large to pass through the mother's pelvis. It was for long debated whether a C-section should be compulsory for breach babies, but recently the majority opinion is in favor, Taylor said while using a doll and a model uterus to demonstrate the dangers of breach birth.

Again, Seibert and both Sarkar sisters were in agreement that the paramedic and EMT session was their favorite of the day. With mannequins and fellow campers the got to try a number of duties that paramedics and EMTs perform, including intubating a patient and hooking a patient up to a heart monitor.

The camp concluded with a visit to Rasmussen College, where participants learned about nursing, health information technology and coding, the role of a pharmacy technician and the Open Door mobile outreach service.

After presentations, students got to practice giving Mantoux tuberculosis screening injections, looked up the medical codes for over a dozen medical conditions, calculated doses and filled prescriptions using M&Ms as mock medication and walked through the Open Door dental clinic on wheels.

Janice Marie Pykles age 74 died Friday April 9, 2021 in Mankato. Funeral Mass will be held 10:30 a.m., Wednesday at St. John the Baptist Catholic Church in Mankato. Burial will be in Calvary Cemetery in Mankato. Mankato Mortuary in charge of arrangements. Survived by her sisters, Sandra (Wen…