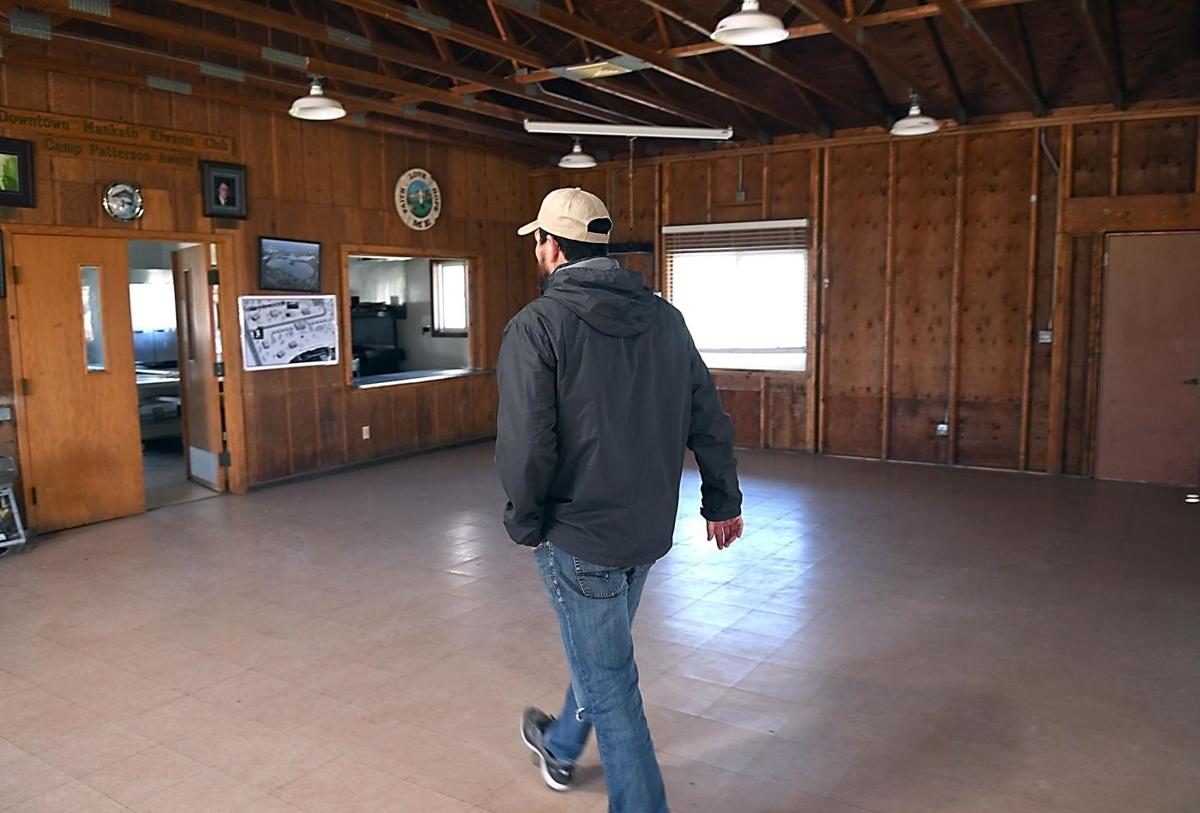 Caretaker Nathan Starke walks through the empty dining hall at Camp Patterson. The camp will remain closed all summer. 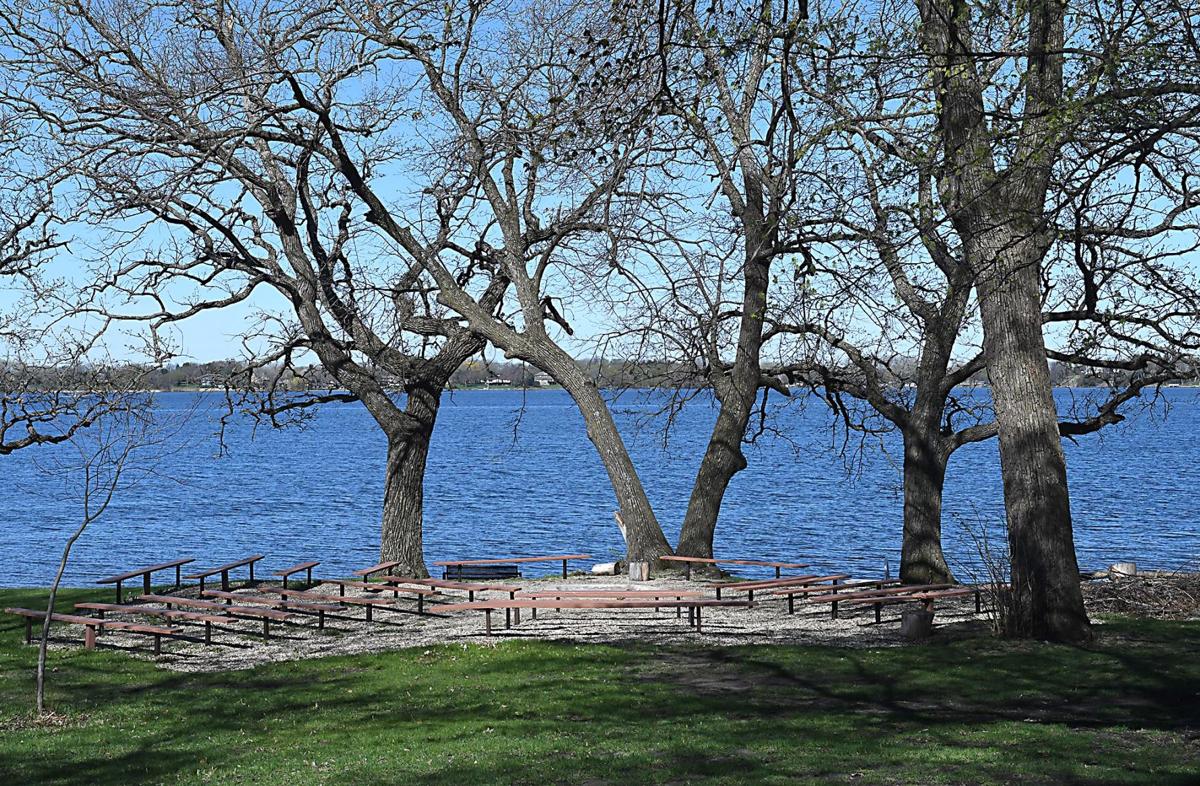 Camp Patterson’s fire ring won’t be hosting groups of kids this summer due to the COVID-19 pandemic.

Camp Patterson caretaker Nathan Starke opens one of the camp’s cabins. With the camp closed due to the COVID-19 pandemic, Starke hopes he and a group of volunteers can complete some much needed maintenance around the grounds.

Caretaker Nathan Starke walks through the empty dining hall at Camp Patterson. The camp will remain closed all summer.

Camp Patterson’s fire ring won’t be hosting groups of kids this summer due to the COVID-19 pandemic.

When the Camp Patterson Committee met in late April to decide whether to close the camp on Lake Washington for the summer in light of the COVID-19 outbreak, it came down to one question: Would the committee members be comfortable sending their own children or grandchildren to camp this summer?

The answer was a resounding no, and they announced April 27 they were suspending activities for the summer. It would be the first summer in nearly 100 years where the camp wouldn’t be full of kids.

With Camp Patterson closed this year, the committee saw an opportunity — an empty camp meant they could get a head start on a number of projects in the works for a couple of years.

“We thought why not take the year off, get our new caretakers up to speed and have them do all the things they want to do, with different maintenance, landscaping and painting,” said Shannon Sinning, co-chair of the Camp Patterson Committee. “Then hopefully we can kick off our construction this summer also.”

Their ultimate goal is to raise $1.5 million in donations to fund six additional cabins, expand the dining hall, activities center and storm shelter, and construct an additional restroom and shower facility.

About 2,500 kids attend a variety of camps there every summer. In recent years, some of the larger camps, such as Celebrate Me, consistently reached full capacity and have had to turn kids away. The six new cabins, which would be the final phase of construction, would provide room for 60 additional campers.

It would be the first major renovation and construction project since the 1980s, when a fire destroyed the dining hall. They raised the money needed to rebuild it in just two weeks. Sinning said the goal is to modernize some of the buildings while maintaining a natural, rustic atmosphere.

“We really need to update, modernize and expand the bathrooms and the showers, especially with the volume of kids we have out there,” Sinning said. “The dining hall would be expanded by 50%. We’d redo the kitchen, which is outdated.”

Shannon Gullickson, president of Camp Patterson Inc., was at the camp on a summer day last year during a tornado warning. She joined the counselors and campers in the storm shelter below the dining hall. That led to a conversation about expanding that shelter as well.

“I saw personally how crowded it was,” Gullickson said. “If you added extra campers, it wouldn’t be enough storm shelter space without that addition.”

Along with the new cabins, renovation and expansion projects, part of the $1.5 million raised would go toward maintaining the camp for years to come.

New caretakers Nathan and Melissa Starke, who took over after Nathan’s parents retired last year, also plan to take advantage of the unoccupied buildings to complete a number of projects that wouldn’t have been possible if camps were in session.

“We’re going to do some landscaping around the cabins, and we’re looking at some building maintenance,” Starke said. “You can’t paint the inside of a cabin unless you have a block of time. So, there are a number of projects we’re looking at and a number of very creative volunteer efforts who social distance in small groups. Now we have the time to organize and help facilitate that.”

Gullickson said they are in the process of contacting several foundations, and Kiwanis Club members already have started making individual donations.

“We’ve also met with the Mankato Area Foundation — they’re a great resource because they have direct connections with donors who are often looking for something to align their values and beliefs with,” Gullickson said.

She and Sinning said the original plan was to span out construction over several years during in the fall. But that time of year is short and unpredictable for construction when it comes to weather, limiting how much they could accomplish.

Now with summer construction as an option, the project could begin as early as June and potentially be completed by next year, although that will depend on how much money they can raise.

“We will not start until we know we have enough funds to cover each of the phases of construction,” Gullickson said. “If we are able to provide additional overnight accommodations by adding cabins, we need an extra restroom facility in place and an expanded dining hall.”

While the camp’s closure is disappointing for a lot of kids and families, Sinning said it will allow them to improve the camp when the kids return next year.