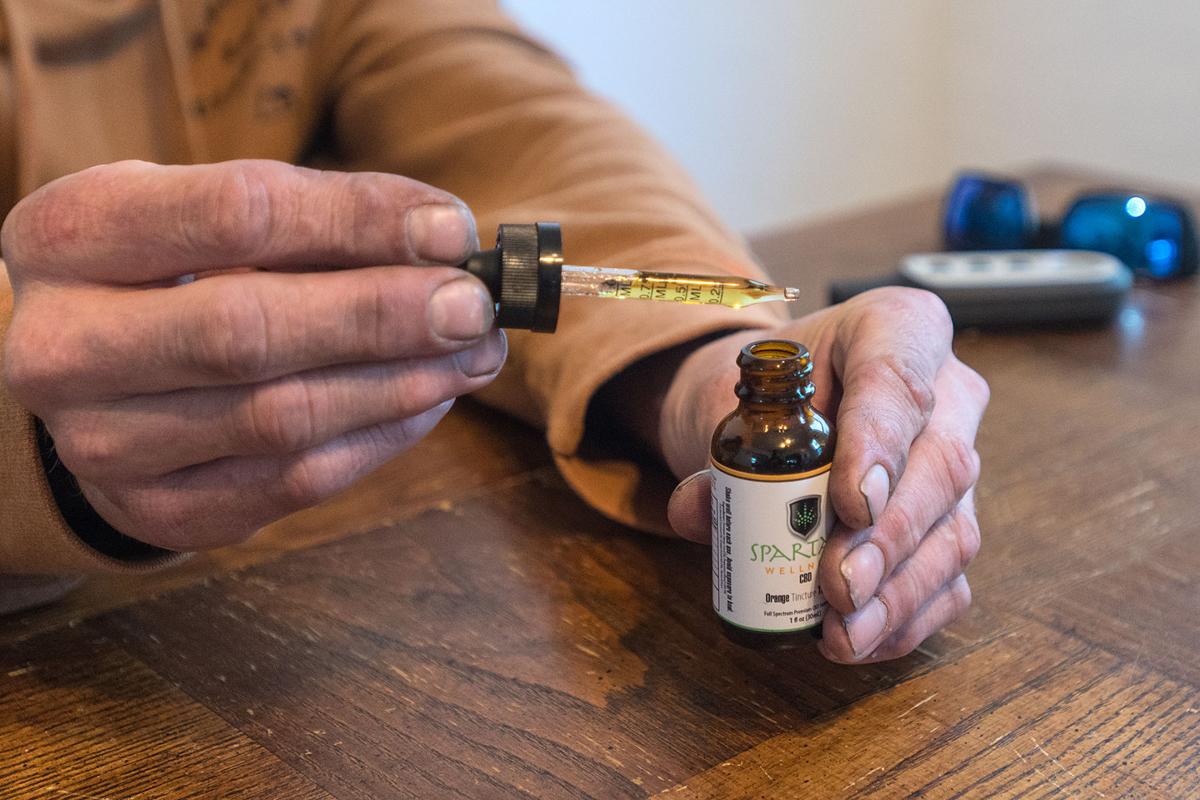 Mike Stark takes a vial of tincture out of a small bottle at his home in Mankato. Stark said he takes one vial in the morning and one in the evening to help his anxiety and back pain. He also said CBD helps his dog. "He can get a little excited sometimes, especially if it rains for three days, or if it's cold out. Put a little drop under his tongue, and he's cool." Photo by Jackson Forderer 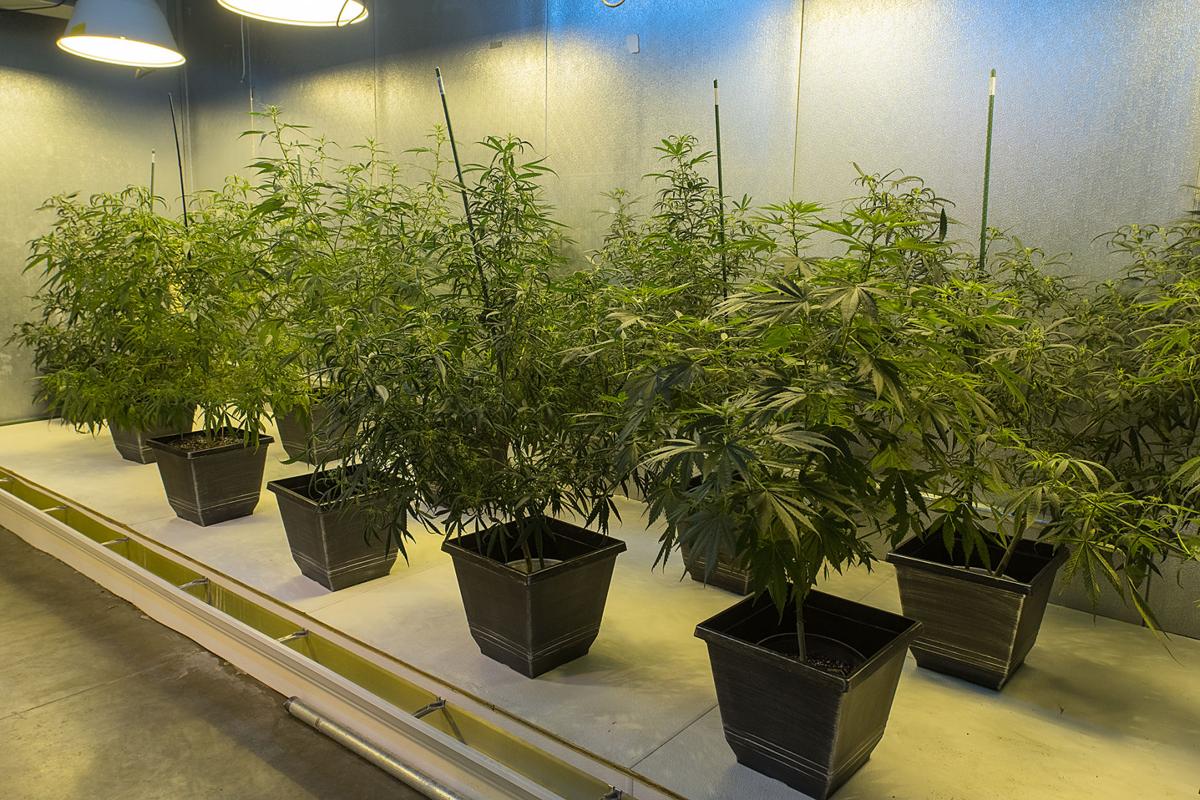 Hemp plants being grown in the CBD Centers store in Mankato. The store also gets its hemp plants from Midwest Hemp Farm in Waseca. Photo by Jackson Forderer 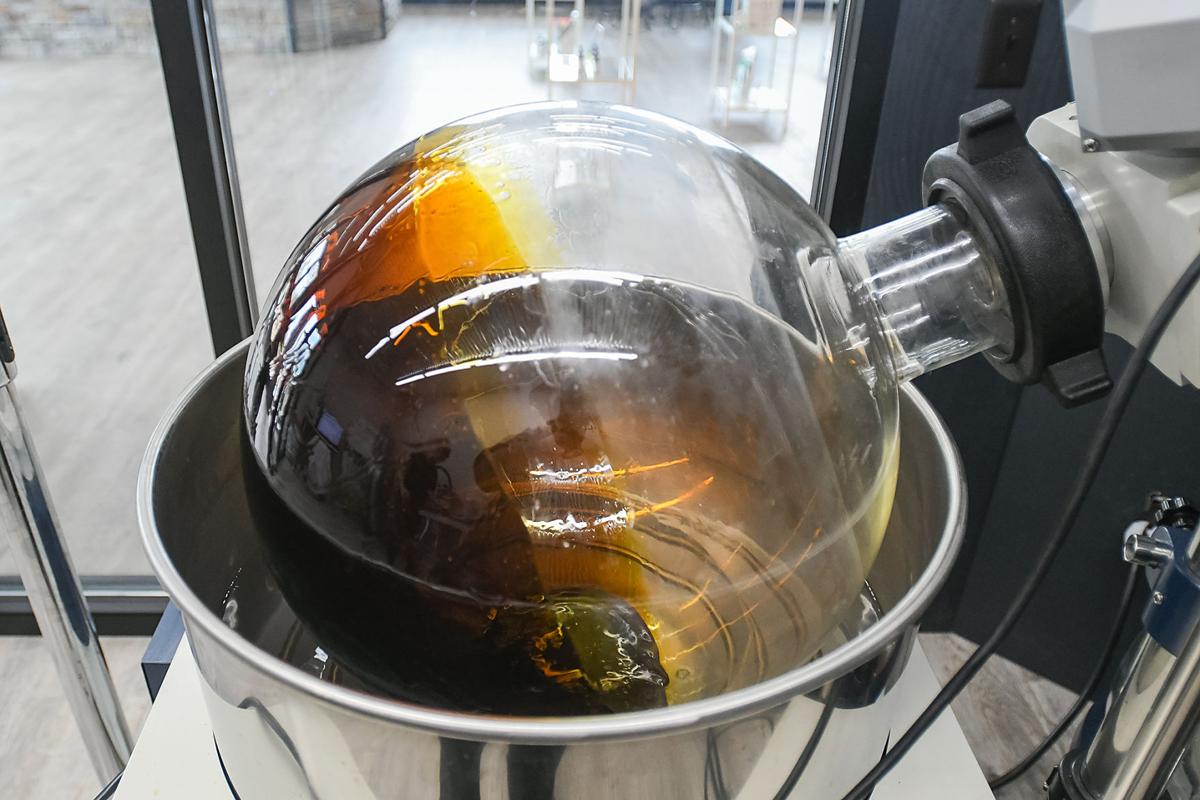 A spinning vial at CBD Centers with extracted oil is just one step in the process of extracting CBD oil from a hemp plant. The store in Mankato also has a machine that allows people to check for the purity of their CBD oil. Photo by Jackson Forderer

Mike Stark of Mankato has been using CBD oil for a month to help with his anxiety and back pain. Stark has irreversible nerve damage and had a C5/C6 fusion surgery and a spinal stimulator installed. He said CBD helps complement his prescription medication. Photo by Jackson Forderer

Mike Stark takes a vial of tincture out of a small bottle at his home in Mankato. Stark said he takes one vial in the morning and one in the evening to help his anxiety and back pain. He also said CBD helps his dog. "He can get a little excited sometimes, especially if it rains for three days, or if it's cold out. Put a little drop under his tongue, and he's cool." Photo by Jackson Forderer

Hemp plants being grown in the CBD Centers store in Mankato. The store also gets its hemp plants from Midwest Hemp Farm in Waseca. Photo by Jackson Forderer

A spinning vial at CBD Centers with extracted oil is just one step in the process of extracting CBD oil from a hemp plant. The store in Mankato also has a machine that allows people to check for the purity of their CBD oil. Photo by Jackson Forderer

MANKATO — CBD is as much a part of Mike Stark’s morning routine as coffee.

The Mankato man, 45, wakes up and takes prescription medication for nerve pain in his back and neck before heading to work. He started taking CBD about six weeks ago as a supplement, inhaling three puffs from a vape and one tincture drop every morning before setting out on his day.

Fully aware CBD isn’t regulated to treat pain, he swears by it.

“Until I actually had some good CBD oil, I didn’t realize how much it could do for me,” he said. “It helps a lot.”

Stark and other consumers looking for relief are fueling a booming CBD industry. Shops selling the cannabis extract — which has little to no THC, the substance in marijuana which gets people high — sprang up in Mankato in the last six months.

The farm bill signed into law in late 2018 legalized industrial hemp, paving the way for the CBD industry. The U.S. Drug Enforcement Administration hasn’t approved the CBD products bought in stores or online, but also isn’t cracking down on possession or sales.

The agency did approve an anti-seizure CBD medication called Epidiolex, which is prescribed. Apart from seizures, Nathan Evers, clinical pharmacist at Mankato Clinic, said he cautions patients against viewing CBD as a cure-all.

“I try to warn people that it’s not proven to help with these other things,” he said. “Over-the-counter products aren’t regulated, and not tested for safety, quality, purity.”

Stark learned this the hard way when he first sought CBD. He bought a bottle at a smoke shop for $80 but didn’t seem to get anything out of it.

He brought the bottle to The CBD Centers, a new shop on 285 St. Andrews Drive, knowing it had a lab on site to test outside products. The product turned out to have zero CBD oil in it, prompting him to start buying at The CBD Centers instead.

The shop is the retail arm of Midwest Hemp Farms and Midwest Extraction Services in Waseca. The lab inside the store shows how CBD is extracted, shelves display in-house products and a growing room showcases the plants CBD comes from.

Julie Sabin of CBD Centers said the lab is an example of the shop’s educational mission, a push to teach customers about CBD and assure them that what they’re buying is legit. She said customers across the age spectrum come in seeking answers.

“They’re looking for another way to help them find some body benefits,” she said. “They’re to the point where people will try anything, and being that the anything is all natural coming from a plant, it’s a win/win.”

CBD comes in an array of forms, from drops to gummies to oils. There are even equivalents for pets, which Sabin said she gives to her 11-year-old black lab.

Customer preferences largely depend on what they want out of it. Ty Homan, owner at Kato CBD on 111 Star Street, said customers with anxiety usually prefer water solubles because it’s faster acting.

His shop opened in January, and he too sees education as an important aspect of business in such a new industry. He’s had customers come in thinking they bought CBD online, but it turned out to be hemp seed oil or hemp extract. Those products aren’t bad, he said, they just don’t have the same qualities as CBD.

“It’s not working because you didn’t buy what you thought you were buying,” he said. “We try to educate them on what to look for when they’re buying CBD and what to avoid.”

While educating, retailers can’t outright say the substance will solve someone’s ailments. Sabin said she speaks from her own experience using CBD, or relays anecdotes from others who’ve benefited from it.

“We stay away from saying ‘it’s going to’ do something, versus ‘it’s been known to,’” she said.

Homan, who takes CBD in gummy and vape form to help him sleep through the night, said he relies on his personal experience in selling the product rather than promises.

“None of this is approved by the FDA, so we just have to let them know there’s no guarantees to this,” he said.

Taking CBD isn’t typically associated with serious health risks for most people, but medical providers advise patients to check with them before starting. Evers said ultimately there isn't much doctors can do if a patient wants to try it.

"There’s a ton of hype surrounding it,” he said. “I don’t recommend people just starting to take it, but can’t really stop it so we try to arm them with knowledge."

Dr. Joanne Genewick, a family medicine physician at Mayo Clinic Health System in Mankato, said patients on medication in particular should make sure CBD won’t cause a negative interaction.

“For some things it can make symptoms worse," she said. "Like with everything, I recommend starting with a low dose and increasing very slowly."

She named the blood-thinner drug Coumadin as having a potentially dangerous interaction with CBD. People seeking the substance should also keep in mind it could have trace amounts of THC, she said, which could show up on a drug screening.

One man who uses CBD declined to give his name for this story specifically because he wasn’t sure what his work would think of the trace amounts of THC found in the product. Homan said the connection in people’s minds between CBD and THC remains prevalent.

“We always get the older guy that comes in here and makes the wisecrack about smoking weed,” he said.

He thinks the attitude will change over time as people become more familiar with CBD.

The retailers said they weren’t too concerned about how a future legalization of marijuana would impact the CBD market. They maintain CBD and THC offer distinct benefits.

“I think CBD is still going to be relevant because there’s benefits of having a high percentage of one or the other,” Homan said.

Stark, whose CBD regimen includes three puffs over lunch and in the evening and another tincture at night on top of his morning routine, feels safe taking it while being in recovery. He said he’s been clean for four years.

“You don’t get addicted to it,” he said. “So it’s no different than taking a Tylenol.”

He had a spinal cord stimulator installed earlier this year to help relieve nerve pain. The device delivers electrical currents to the spinal cord to block pain, but it doesn’t solve everything.

Between the pain and anxiety, he said it's hard to get through his work day with just the stimulator and prescribed medicine, which is why he added CBD to the mix after talking to his doctor and psychiatrist. He gives pet CBD to his dog and cat when they get overly excited.

After letting out a puff at his dining room table recently, he remarked how he already felt more at ease.

“CBD oil improves the quality of my life," he said. "It really does."