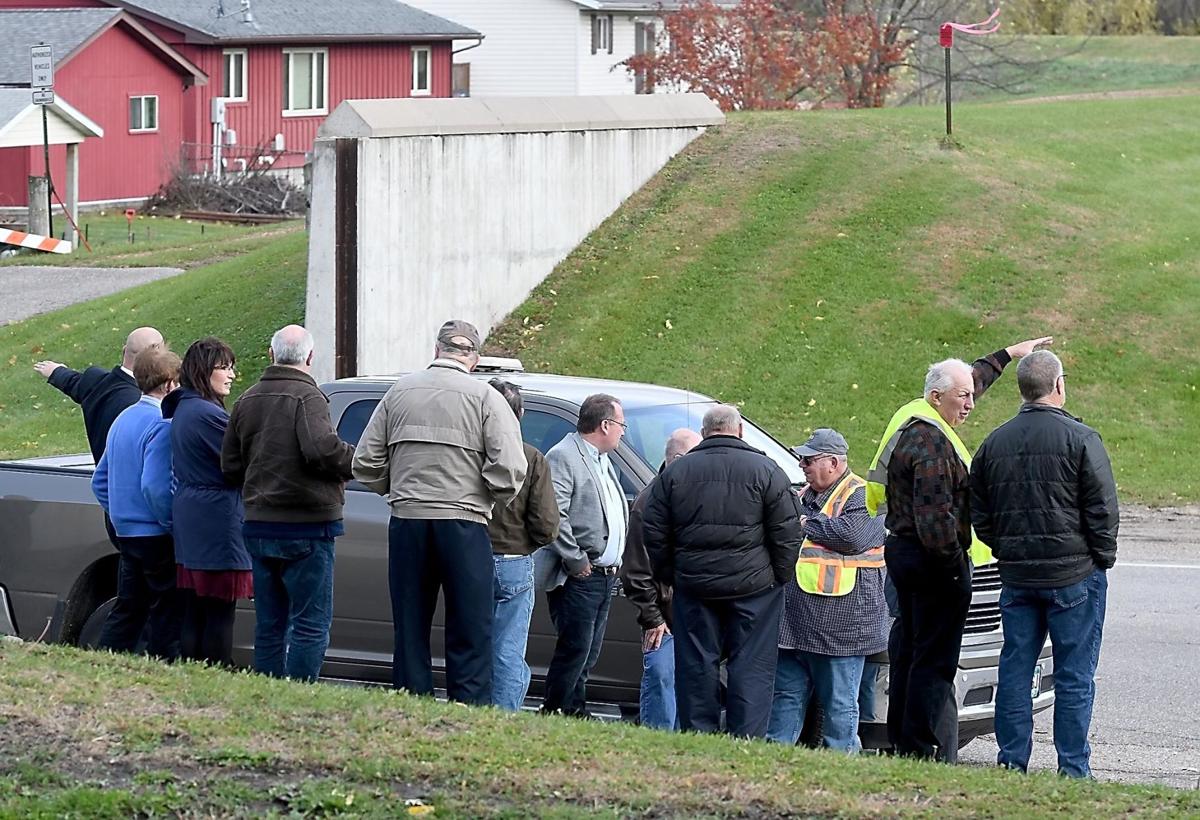 The Senate Capital Investment Committee inspects a levy gate on the south edge of Henderson Tuesday. 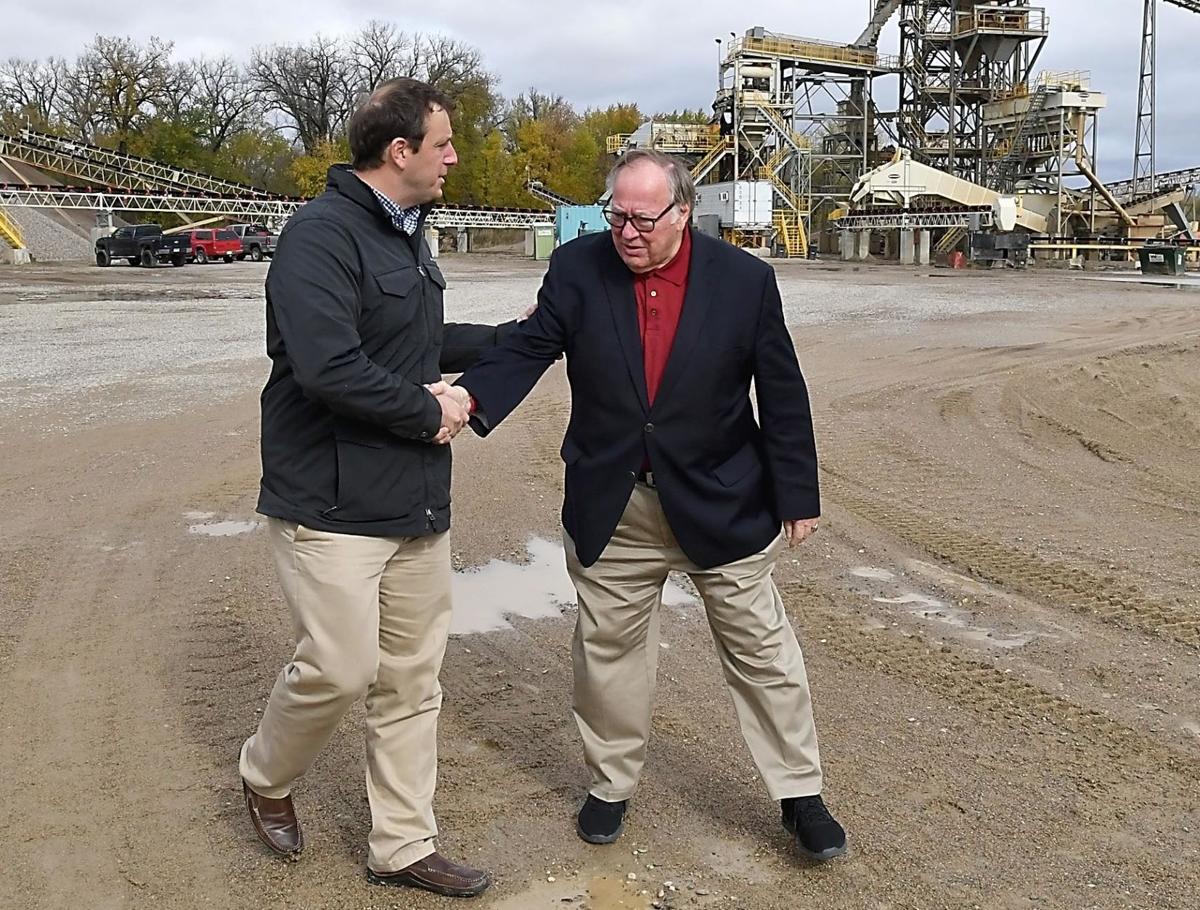 Mark Setterstrom of Cemstone and Sen. Dave Senjem, R-Rochester, shake hands at a Cemstone gravel pit off of County Road 6 near the Minnesota River Tuesday.

The Senate Capital Investment Committee inspects a levy gate on the south edge of Henderson Tuesday.

Mark Setterstrom of Cemstone and Sen. Dave Senjem, R-Rochester, shake hands at a Cemstone gravel pit off of County Road 6 near the Minnesota River Tuesday.

In a normal year, Henderson residents can expect three out of the four routes out of town to close for about 20 to 25 days due to flooding.

That’s why local officials are seeking nearly $35 million from the Minnesota Legislature to raise Sibley County Road 6 and Highway 93. As they pointed out to lawmakers Tuesday, Henderson gets hurt more and more whenever its access to other parts of the state is cut off.

The Senate Capital Investment Committee, which puts together infrastructure bills, toured the Henderson area Tuesday afternoon as part of a larger tour of south-central Minnesota projects.

Henderson was hit hard by spring flooding earlier this year. It’s close to the Minnesota River with only four routes out of town — County Road 6 to the north, Highway 19 to the east and west, and Highway 93 south. While the western route was open this year, that isn’t always the case whenever Henderson gets hit by floods.

When the nearby Minnesota River and area waterways rise, they’re often unmanageable, save for a few temporary levies put in place to prevent flooding within the city. Sibley County officials say the water rises to between 7 and 7.5 feet above the road and requires at least a day or two to clean up after the waters recede, as the leftover silt and muck make the asphalt as slippery as ice.

For many longtime residents, flooding is another part of living in the city of about 930 people. People often boat around during flooding, and more than one person described some neighborhoods on the outskirts of Henderson as marinas during high waters.

But increased rainfall over the past few decades, combined with drainage changes in urban and rural areas have caused more flooding than ever in the area. The town has dealt with flooding for seven out of the past 10 years.

Mudslides west of town completely cut off Henderson’s access in 2014. Menne said mudslides on western Highway 19 have happened twice in the past 10 years, which effectively crippled the city’s ability to respond to public safety issues.

The cut-off routes mean a typical 10-minute drive into nearby Le Sueur can take up to an hour — which is what happened to Le Sueur-Henderson Public Schools’ busing routes. The district cut a half-hour from its school day this spring to accommodate longer bus routes to and from various schools, which translated to almost a week of lost school time.

“It’s not OK for us to be losing that much time,” said Brigid Tuck, Le Sueur-Henderson School Board chair.

It can be even worse for area businesses. Cemstone owns a gravel pit in between the Minnesota River and County Road 6, which has to shut down every time the nearby road closes.

“This is too important not to address,” said Newman, the vice-chair of the Senate Capital Investment Committee.

It’s unclear whether both, or even either, project will be included in next year’s infrastructure bills, also called bonding bills because the state borrows to pay for construction. Lawmakers face more than $5.3 billion in requests, and Democrats and Republicans don’t agree on whether to expand a final bonding bill to cover more than the $1 billion bonding bills the Legislature has passed over the past few years.

Committee Chair Dave Senjem, R-Rochester, said the GOP-controlled Senate likely won’t set a bonding budget target until after Minnesota’s February economic forecast shows how much the state is collecting in revenue. Though he didn’t promise Henderson’s projects would be included in a bill, he called the Henderson area’s testimony “powerful” and said Newman would likely work hard to include his district’s requests.

Senjem said he’d like to put together a bonding request earlier in the session, either in February or March, rather than in the last few weeks as lawmakers have done in recent years so lawmakers can agree on bonding sooner.

“We’ve got a lot to do to work through these differences,” Senjem said.