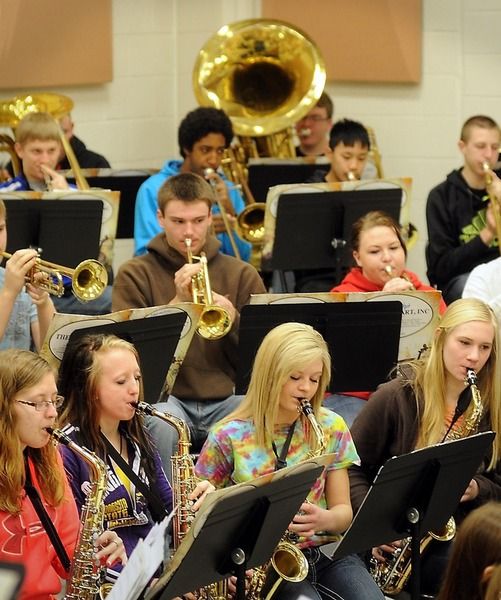 More than 85 percent of sixth- through 12th-graders at Cleveland Public School take part in band. 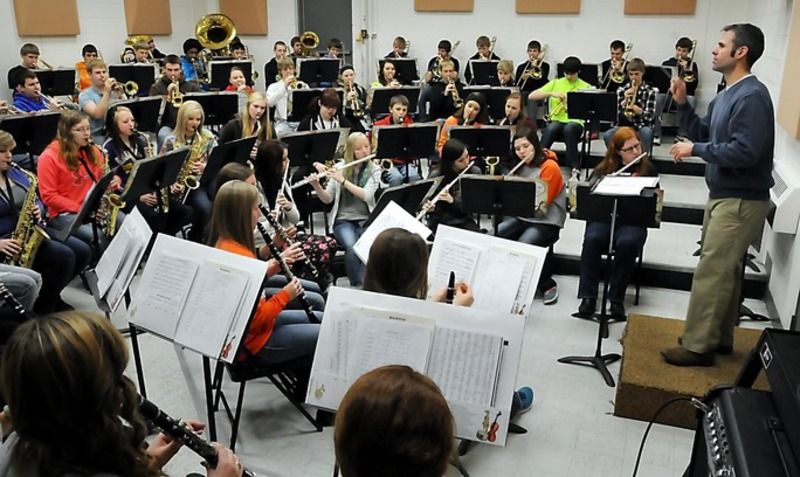 Erik Hermanson has been the director of bands for 20 years in Cleveland. As the reputation of the program has grown, so has the participation of students and the audiences who come to performances. 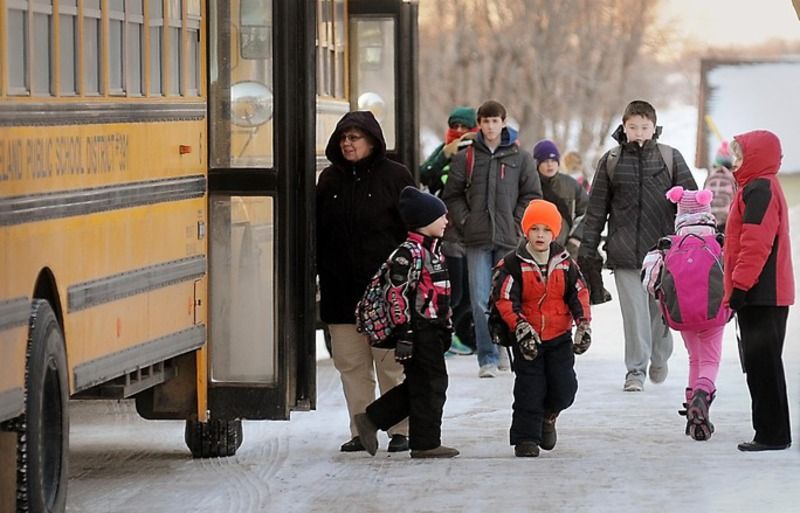 The student population at Cleveland Public School has grown the past few years due in large part to open enrollment from other districts.

More than 85 percent of sixth- through 12th-graders at Cleveland Public School take part in band.

Erik Hermanson has been the director of bands for 20 years in Cleveland. As the reputation of the program has grown, so has the participation of students and the audiences who come to performances.

The student population at Cleveland Public School has grown the past few years due in large part to open enrollment from other districts.

“Mr. Hermanson” is the first answer students give when asked why so many kids at Cleveland Public School take band.

More than 85 percent of sixth- through 12th-graders are in band, and that includes the entire student bodies of sixth, seventh and eighth grades.

“He really cares about us,” said senior Grant Germscheid, who has been in the program since sixth grade.

Bailey Ellickson, also a senior, was on the fence years ago about whether she wanted to take part. Hermanson helped change her mind.

“He said, 'Hey, just come down and try it once,' and then I fell in love,” said Ellickson, whose been in band since seventh grade.

Even though Germscheid and Ellickson won't be able to reap the benefits, they're both excited about the prospect of a big addition onto Cleveland school that would include a performing arts theater and music practice space. The bond project, which Supt. Brian Phillips hopes will go to voters in 2015, would mean great things for the band program, said Erik Hermanson.

“For the health of the school as a whole, I think it's so huge,” he said. “It gives us something to offer the community around us.”

In 2009 the district had plans and renderings and was ready to begin holding public meetings about the prospect of building an addition onto the school that would have cost $15 million to $19 million. The addition would have included a performing arts theater, a new gymnasium, classroom space, a commons area and music practice space, among other things.

“But in '09 the economy changed on us all of a sudden,” Phillips said. “We thought, 'Boy, the timing is horrible to throw this at our community and to raise taxes,' so we shelved it, and we said we'd wait for a better time.”

Like other districts surrounding Mankato, such as St. Peter and Nicollet, Cleveland has had its eye on Greater Mankato's growth the past few years. And Phillips said Cleveland has been no exception to riding the wave of good fortune that has come with the area's booming population.

In the past five school years, Cleveland's K-12 student population has grown from 397 in 2009-10 to 451 this year, which is a 14 percent increase. Phillips said the growth has a lot to do with open enrollment. As of the end of September, 153 students attending Cleveland were coming from areas such as Mankato, St. Peter and Waterville. About 90 students living in the Cleveland district were open enrolling to other districts.

“Our biggest growth has been from our people further and further out wanting to come here. For several years we've expanded our bus routes, and we're going further and further to get these kids,” Phillips said. “We may be at a point where we've probably pushed the boundaries of how far we can go. More drivers and more buses would be needed, and we don't want kids on the bus too long.”

The growth trend and the rebounding of the economy recently led the district to dust off plans for the bond project. A parcel of land also recently went up for sale on the south side of the school, which opens up an area for the addition that would be less costly because the terrain is flat and easier to build on, Phillips said.

“I think it's going to be cheaper for us,” Phillips said.

He said the growth trend is also a reason to act now to improve the school. As Mankato grows, Cleveland and other outlying districts are expected to continue to grow as well, he said. And with so many students open enrolling and keeping their options open, it's important for the district to give families plenty of reasons to choose Cleveland.

“(One good reason) is they can come here if they want to be outstanding in music,” Phillips said.

The district is in the research stage of the project, Phillips said. It has not started working with a specific firm to devise new plans, and Phillips has no estimated project cost, which means an estimate for property-owner tax increases isn't possible. The district has yet to purchase the acreage of land to the south of the building, but the owner has granted the district a right to purchase.

In addition to the theater, gym, commons and classroom space, the project could include a new parking area, a new bus garage and about $3 million in repairs and updates to the existing school building.

In 2009 Phillips said public feedback for the project was positive. “We had a lot of excitement,” he said, “particularly when we were talking about our performing arts theater because of the success of our music programs.”

Phillips said the past several referendums in the district have been successful, and he is optimistic about putting a bond question to voters in fall 2015. In more than 20 years the school has only dealt with upkeep and maintenance issues, such as a new boiler, roofing and a new ventilation system.

Before the 2015 question, Phillips said the district plans to ask voters this year for a one-year technology bond to put iPads or tablets in the hands of every student. The response by voters to that initiative might be an indicator of support for the building project bond.

Nancy Fenrick has lived in Cleveland since 1992 and had a son who attended the school. She said the community has been supportive of referendums in the past, and she would support any measure that would “keep the school going and keep it strong.”

Greg Baker, a lifelong Cleveland resident and owner of Jocko's Bar & Grill, agreed. He went through the Cleveland Public School system, as did his three kids and now his grandson. Baker said he and the community overall are big supporters of the school.

“I can tell you right now I would support (the bond) — anything for the school and to make the school even better,” Baker said. “They've got one of the best band teachers in the state. The jazz band, it's just amazing. It's amazing what he can do with those kids.”

Hermanson has been the director of bands in Cleveland for 20 years, and in 1994 when he arrived, only 19 kids were participating in senior band. He credits a variety of people for helping grow the program.

Phillips helped switch the band to the first hour of school so students wouldn't have to miss sports, and they changed the band to an everyday class instead of every other day. School Board members have even donated their pay to help buy new music and equipment, he said.

The reputation of the band program within the school, in the Cleveland community and elsewhere has steadily grown over the years. The band travels and competes at numerous events — including as far as California and Florida — and Hermanson said his students are passionate about learning their instruments and performing to the best of their ability.

Hermanson said it would be great, for both the students and the audiences, to have a professional place to perform at home.

“All of our performances are in the gym,” said Hermanson, who added that the community packs into sports bleachers for every concert. “Acoustically, and just being on a stage, are experiences I think the students should have. For listeners, too.”