Germany: 25 arrested on suspicion of planning a… 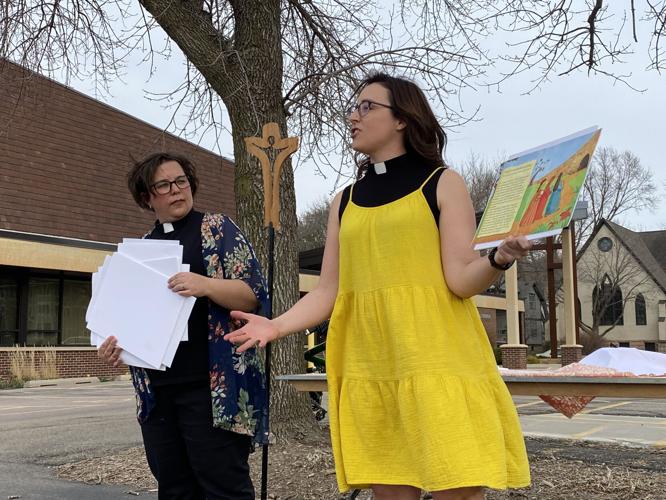 Erica Koser (left) and Collette Broady Grund share the Easter story Sunday with visitors at Shelter Church in the parking lot of Bethlehem Lutheran Church. It was the first service of its kind for the Connections Ministry, which serves the homeless. 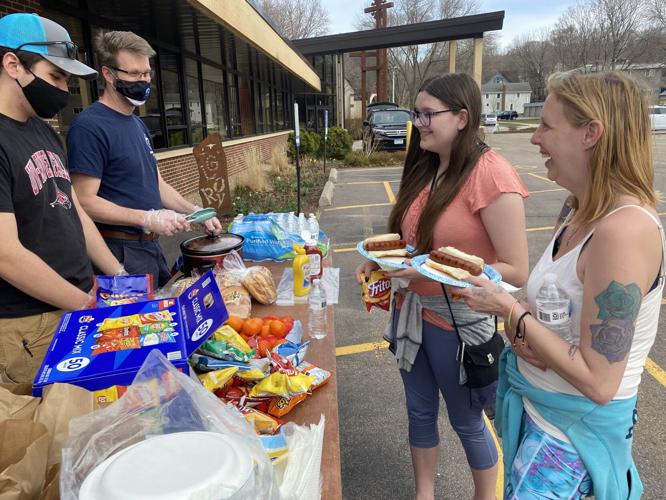 Volunteers Ben Koser (left) and Eric Koser served jumbo hotdogs and chips to Nyla and Danielle Habisch Sunday as part of a new weekly service for people without a church home.

Erica Koser (left) and Collette Broady Grund share the Easter story Sunday with visitors at Shelter Church in the parking lot of Bethlehem Lutheran Church. It was the first service of its kind for the Connections Ministry, which serves the homeless.

Volunteers Ben Koser (left) and Eric Koser served jumbo hotdogs and chips to Nyla and Danielle Habisch Sunday as part of a new weekly service for people without a church home.

MANKATO — After a rough patch over a year ago, life has improved significantly for Danielle Habisch and her daughter, Nyla, who spent some time staying at Connections Shelter in Mankato when they found themselves homeless.

“We stayed at the shelter not the last winter but the winter before that,” she said. “We’re now in our own place a couple blocks from here.”

Habisch said the Connections Ministry played a big role in helping them get back on their feet. So when she saw a Facebook post about the new Shelter Church, which held its first service on Easter Sunday in the parking lot of Bethlehem Lutheran Church, she was intrigued.

“We haven’t really found a church yet,” Habisch said. “We’ve just been popping around. I like that this is outdoors.”

At the new Shelter Church, hosting services outside is intentional, said Erica Koser, pastor of community connections for Connections Ministry, a coalition of a dozen churches that provide assistance to the homeless.

“We want to have a faith community that is very accessible to the population we work with,” Koser said. “It was part of our vision from the very beginning.”

Along with the new weekly service, anyone in need can come for a free meal, served at 4:30 p.m. every Sunday, rain or shine.

Loren Slama heard about the service from Koser when she was handing out flyers for the new church at one of Centenary Methodist Church’s community breakfasts.

“I work with a dairy farmer and he had mentioned that we hadn’t been to church lately,” Slama said. “So, when Pastor Erica invited us, I jumped at the opportunity,”

About 140 individuals ranging in age from 6 months to 80 years old have stayed at the shelter this season, which is open from October through the end of May each year.

When Connections Ministry first began serving the homeless in 2017, participating churches felt strongly about inviting people who were staying in their buildings at the time to also worship with them, said Collette Broady Grund, pastor of administration and development for Connections.

“A couple of our churches had better success than others,” Broady Grund said. “But overall, we didn’t see our shelter guests finding church homes.”

There are a lot of reasons for that, she said. For one, trust in institutions is low among the population they serve. She said people struggling to make ends meet or even just to survive have a lot of hoops to jump through when it comes to getting government assistance.

“Depending on who you’re working with, you may get shuffled to four or five case workers for one particular thing,” Broady Grund said. “It’s just their experience that any kind of a system is not set up to actually serve them. They have to work really hard to get what they need from the system.”

All the unwritten rules and social expectations that go along with traditional church services can add stress and anxiety to people who expend so much energy just trying to survive day by day, she said.

“To try to walk into a church building and negotiate all of the social cues that are happening and then to get into worship and figure out what’s going on there, all while people are looking at you, trying to figure out who you are, where you fit and what you need to do — I think it’s just too much for most of our people,” she said.

The purpose of Shelter Church, she said, is to meet people where they are, with no expectations — whether people just want to come for a meal or decide to stay for the service.

“There are no rules about how you should dress, or when you should show up or if you wander in and out or just stand on the fringes — just a general acceptance of where people are and then literally having everything out in the open,” Broady Grund said. “If you want to get up and leave at any point, nobody is going to say anything or look at you funny.”

Services after the meal are relatively short, with original music commissioned by a musician and worship leader Koser knows from the Twin Cities, along with the reading of Scripture, an opportunity to share, a short sermon and Communion.

“It’s a very straight forward service, and we’ll have a musician each week,” Koser said. “Communion will happen every week so that we’re feeding both the body and the soul and then (concluding with) our closing song, so very stripped down and simple.”

Koser and Broady Grund said everyone is welcome, although the services are intended for people who don’t have an existing faith community. They intend to keep the services open ended and adaptable, depending on the needs of the community. That includes what to do when the wintry weather returns later this year.

“We want the people worshipping with us to be the ones making the decisions together about what we do next,” she said. “It really can be just a conversation with our worshipping community and trusting that those conversations will lead to whatever the next thing is for us.”