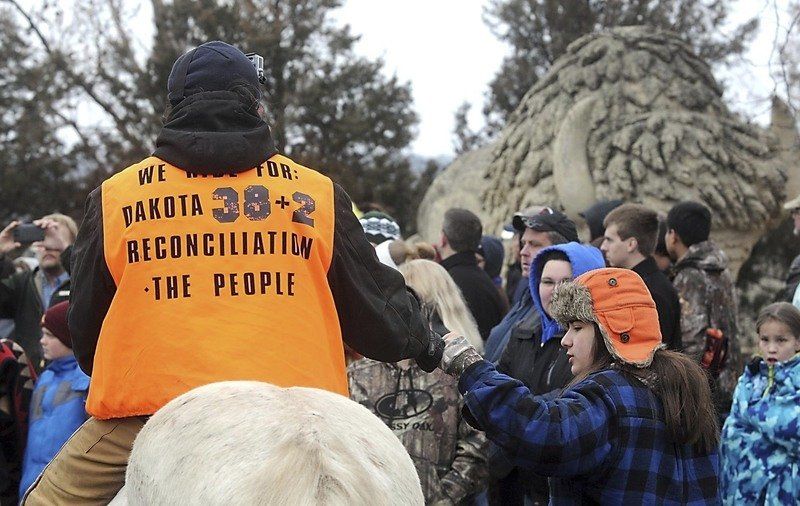 A Dakota rider greets a friend at the end of the ride Friday in Reconciliation Park. Photo by Pat Christman 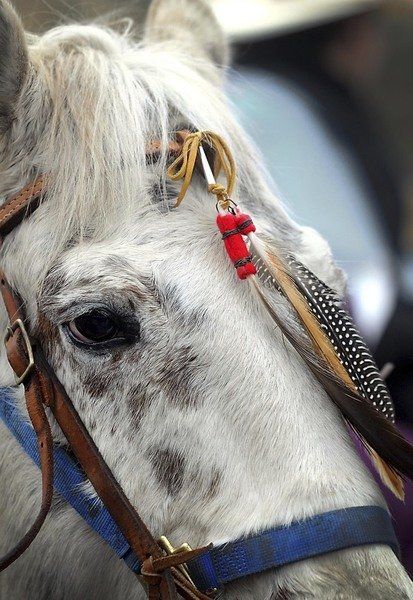 Feathers hang from "Chief," a horse who completed all 330 miles of this year's Dakota 38 Memorial Ride. Photo by Pat Christman 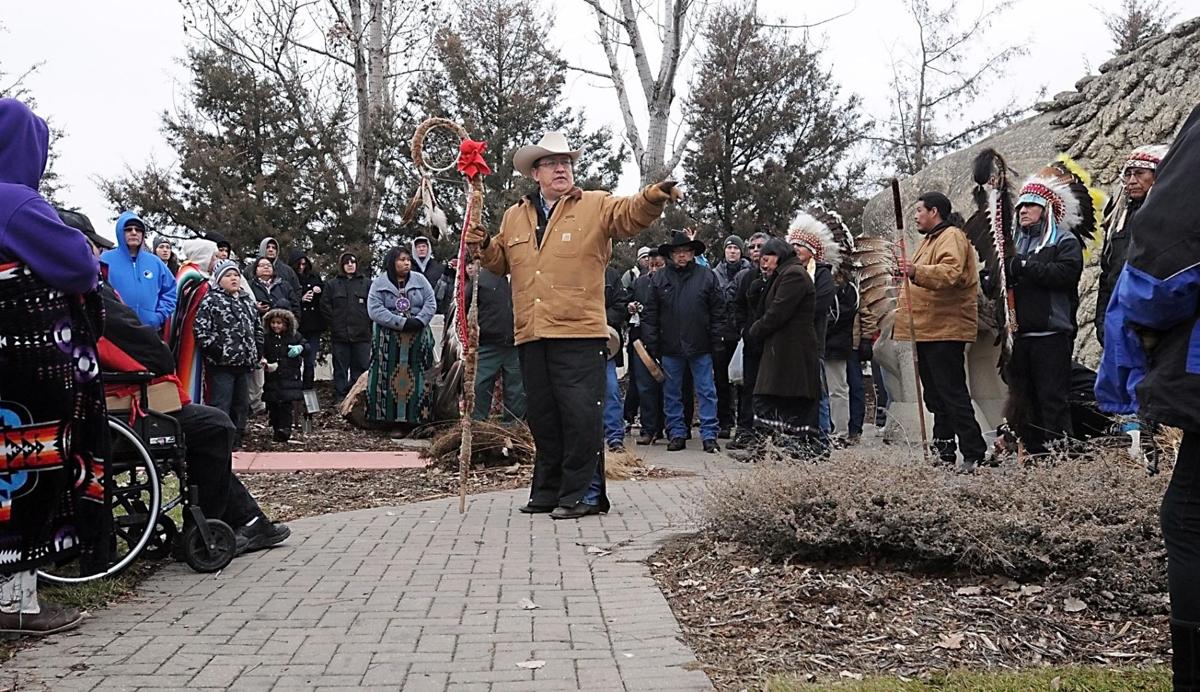 Speakers addressed the need for love and compassion at the end of the ride. Photo by Pat Christman 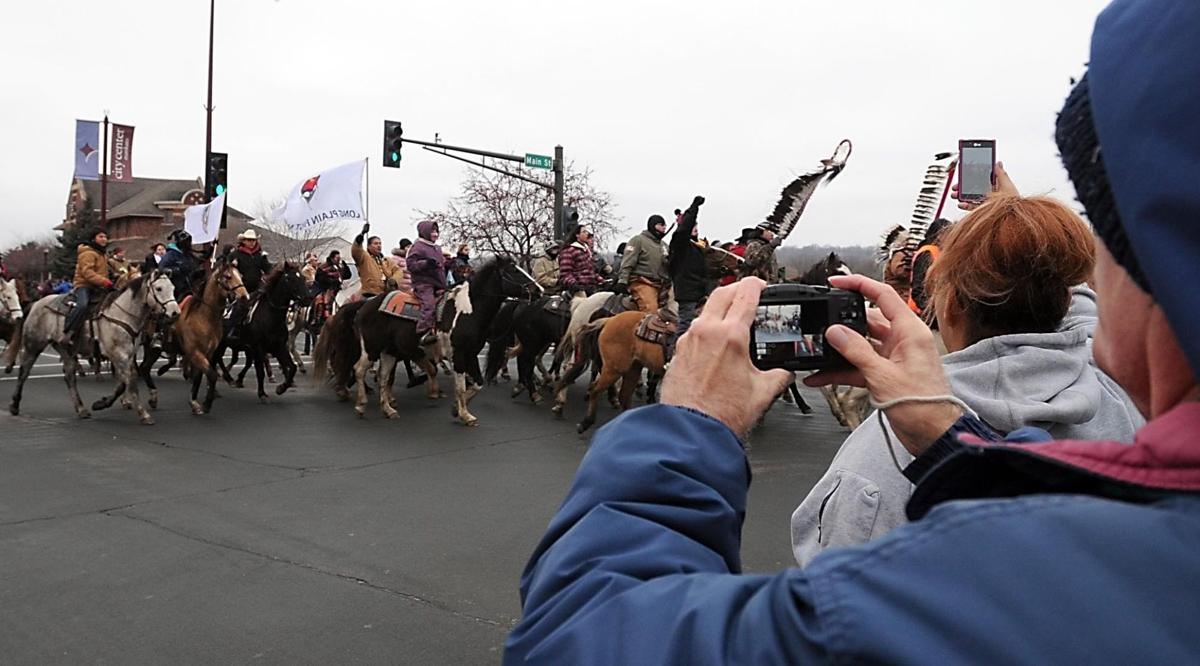 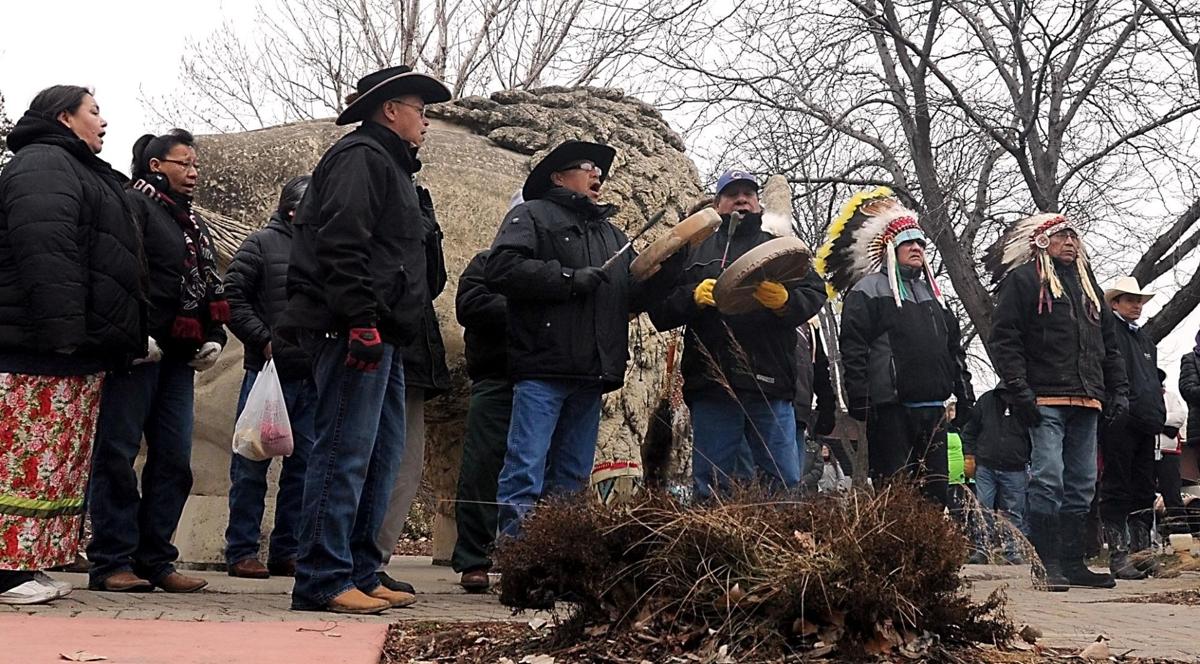 Dakota elders and others sing before the memorial horseback riders arrive at Reconciliation Park Friday. Photo by Pat Christman

A Dakota rider greets a friend at the end of the ride Friday in Reconciliation Park. Photo by Pat Christman

Feathers hang from "Chief," a horse who completed all 330 miles of this year's Dakota 38 Memorial Ride. Photo by Pat Christman

Speakers addressed the need for love and compassion at the end of the ride. Photo by Pat Christman

Dakota elders and others sing before the memorial horseback riders arrive at Reconciliation Park Friday. Photo by Pat Christman

MANKATO — The Dakota, gathered in the dim half-light so reminiscent of gloomy winter mornings, focused their eyes skyward, seemingly entranced by the beauty of a lone, dark-feathered eagle wheeling gracefully above their heads.

Then, a murmur ran through the crowd.

“There, a second eagle,” someone said pointing.

Drums thumped, rhythmically emphatic, their beat guiding fragrant tobacco smoke in swirling eddies of gray fog that lingered in the air just long enough to kiss the brow of each calmly blinking horse assembled at Land of Memories Park.

The echo of a chant, strong and dignified even in its second rendition, faded as the eagles flew to the east.

A loud whoop rang out across the field.

“Move in!” someone shouted. “To the center.”

Those on foot shifted forward, closer to the bonfire, as more than 30 mounted Dakota spurred their horses to trot. The riders circled the crowd, shouting and yelping as they guided their steeds round the edge of the ring, in whirling spiral almost identical to that of the eagle.

“We do this to honor the memory of a war (our ancestors) thought would never be won,” Tim LaButte said, just minutes before striking out with the other horsemen.

He meant the U.S.-Dakota War of 1862, after which 303 Dakota Indians were accused of war crimes and sentenced to death by U.S. military commission. Though President Abraham Lincoln commuted 264 of the sentences, 38 of the prisoners were executed.

“We feel what happened more than anything,” LaButte said, saying that is was hard to understand the events of that day or why it took place. “We feel the sadness especially on the river ride."

The Dec. 26 “38 plus 2” memorial ride, which culminates in a large mid-morning ceremony at Reconciliation Park, lasts two weeks and is 330 miles. It begins in Lower Brule, South Dakota.

LaButte, who is 54, is from Peever, South Dakota, near the source of the Minnesota River. He has a direct tie to the execution — his great-great-grandfather, Zi-Ka-Tan-To or Bluebird, was among those scheduled to be hung.

Bluebird's 6-year-old son, Samuel Hopkins Jr., was on the forced march from Mankato to Fort Snelling. Later, as an adult, shiny rings of scar tissue would forever circle his wrists, left there by metal shackles.

“It was pretty much a death march from them,” LaButte said. “They didn't know what was going to happen to them.”

LaButte said the ride and ceremony are symbolic of his family's suffering and that he draws parallels between the ritual itself and his ancestors.

Woven into the rites are the four sacred directions: north, south, east and west. Woven into LaButte and the Dakota's history were four different ways of life Native Americans followed during America's earliest days: acceptance, assistance, resistance and survival.

“My grandparents each followed a different path,” he said.

One peacefully accepted the new government's presence, while another taught settlers how to farm the land. One was almost hung, and another fled with her children after her husband was killed by traders.

“It was a time of tribal uncertainty,” LaButte said, explaining how many families and Dakota responded to the war differently.

LaButte joined the riders when he was 26, just two years after leaving the Marines. His understanding of the war has grown and expanded since then, he said.

But now it is time to teach a new generation of Dakota its history — and how to reconcile itself to it.

Among that new generation is 11-year-old Deanna Milda, who trotted alongside her father, Richard Milda, during the ride.

From Flandrau, she joined the riders after school let out this week. She sat bundled up on a large horse at Reconciliation Park and watched as a group of Dakota runners gathered in front of the large stone buffalo.

In addition to the 38 hung in Mankato, they honored two Dakota leaders, Little Six and Medicine Bottle, who escaped to Canada but were later captured and hung, as well.

“The 38 plus two were not afraid to die,” Milda said. “Because they knew they had to die to save their people.”

But it's still sad they had to give their lives, she said.

Chief Arvol Looking Horse, 19th generation keeper of the White Buffalo Calf Pipe Bundle and spiritual leader for the Lakota, Dakota and Nakota people, said the execution was indeed sad. But he told onlookers at Friday morning's ceremony that it was a shared sorrow.

“Our history hurts, but so does yours,” he said.

He said that keeping in mind a new sorrow. Shelly Bausch, one of the riders, died earlier this week after falling off her mule. Her family told news reporters that while she received stitches, the cause of death was epilepsy.

The ride continued after her death and Looking Horse said Friday the group continues to pray for her and her family, while riding in her honor.

Acknowledging grief and sadness is just another part of the ride, as is coming to peace with both. Looking Horse said love and compassion are both a vital part of healing, reminding tribe members to look ahead to the future and be cognizant of how their actions affected others and future Dakota generations.

“We've got to be mindful of what we send out to the universe,” he said. “Because that comes back again.”