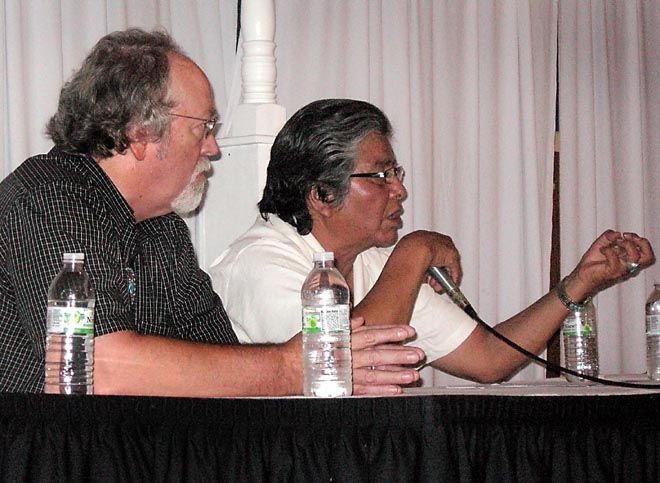 Sheldon Wolfchild (right) discusses his documentary, “Stardreamers,” in front of a New Ulm audience. The first part of the three-part film, about the causes of the 1862 U.S.-Dakota War, relies heavily on the work of historian Mark Diedrich (left). 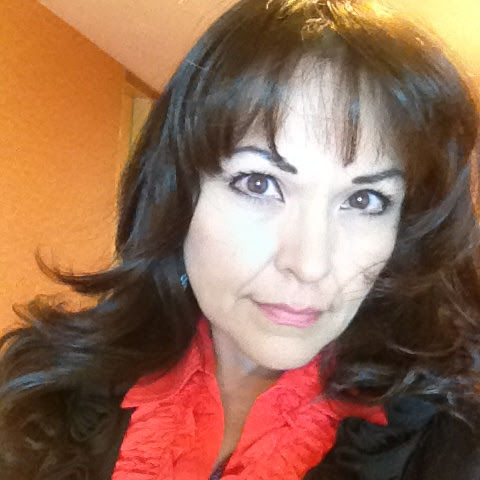 Tamara St. John is an archivist with the Sisseton-Wahpeton Oyate.

Sheldon Wolfchild (right) discusses his documentary, “Stardreamers,” in front of a New Ulm audience. The first part of the three-part film, about the causes of the 1862 U.S.-Dakota War, relies heavily on the work of historian Mark Diedrich (left).

Tamara St. John is an archivist with the Sisseton-Wahpeton Oyate.

Part 1 of Sheldon Wolfchild’s documentary, on the causes of the U.S.-Dakota War, devotes five words to the conflict itself: “The war ended fairly soon.”

The rest of the hour-plus documentary focuses on what is euphemistically called the “Indian System,” the government’s plan to cheat Native Americans off their land, put them on reservations and kill those who resist.

“The ultimate goal is the land,” said Wolfchild, a Morton resident and member of the Mdewakanton community. The second and third parts of his nearly-finished documentary, “Stardreamers,” are about the 19th-century American legal system and the culture and politics of the Dakota.

Wolfchild said his documentary is a reaction to the histories that focused on the violence committed by Native Americans during the war.

“They had to make us look like savage human beings,” Wolfchild said, in order to justify treating them like savages.

The documentary, on the other hand, is all context. It relies heavily on the work of author and Minnesota native Mark Diedrich.

The “Indian System,” according to the documentary, starts with the removal of tribes from their land. For at least some of the Dakota, the most precious land was at the confluence of the Minnesota and Mississippi rivers. Wolfchild said it’s called “Bdote,” and said he believes it to be where his people were created.

Then, a treaty would require money to be paid in the compensation fund, which would be raided by traders to make up for debts both real and imagined. In this case, that meant a pair of treaties with the northern and southern bands, then called the Sioux.

Over time, their game disappeared and some Native Americans would grow dependent on the payments.

And the treaties and negotiations were never really in good faith — the government didn’t believe it had much to lose by cheating.

In an 1803 letter from Thomas Jefferson to William Henry Harrison, then-governor of the Indiana Territory, Jefferson said the Native Americans “must see we have only to shut our hand to crush them.”

The immediate background of the war — broken treaties, theft by traders — is only part of the context.

Tamara St. John, an archivist with the Sisseton-Wahpeton Oyate, called it a “constant encroachment of our lands.”

She said the conflict doesn’t often get placed in the context of genocide.

“When Gov. Ramsey addresses the House and calls for the extermination of the Sioux, that’s exactly what’s happening,” she said. “Non-Indian society minimizes that idea.”

It is difficult to know how many Native Americans died, though historians have tried. Steven Pinker, in “The Better Angels of Our Nature,” cites the work of amateur historian Matthew White, who compiled a list he called “(Possibly) The Twenty (or so) Worst Things People Have Done to Each Other.”

Compiling death counts from other histories and encyclopedias, White comes to an estimate of 20 million dead due to the entire Native American genocide. That puts it in 7th place in the all-time-worst-things list.

When the Dakota started fighting, the written histories have only rarely said why, St. John said.

“If a group of people were faced with starvation, how long would it take them to resort to violence?”

And in battles like Wood Lake, the non-Native American historical figures are noted by name, while the Dakota leaders weren’t.

“We had our own leaders, our own chiefs,” St. John said.

Wolfchild said he recently learned he is related to one of them, Medicine Bottle, who was hung at Fort Snelling after the war. Wolfchild is still looking for his remains, dug up at one point by doctors, to give him a proper burial.

St. John said the aftermath of the war is another rarely-told story. The exile divided families and cut their connections with the past.

“It’s important our elders remind us not only to remember our kinship ties, but also who we really are,” she said.

Because the Dakota did not have a written language, they passed their history orally.

St. John said those histories are sometimes given short shrift, but she’s not found them to be wrong, at least not in spirit.

In one such case, her stepfather said his grandmother would tell a story about a man who was held in jail for a trial on a shooting. In the story, the man turned into a snake and escaped.

When she researched the man, she found he was in a trial but was released on a technicality.

“It was a difference in how someone was telling a story. Sometimes we think they don’t match, but really, they do. Everybody sees things from a different angle,” she said.

What do these new interpretations of history mean for how we should treat each other now?

Minnesota Public Radio News put that question to Stanley Crooks, who was the chairman of the Shakopee Mdewakanton when he died Aug. 25.

He said we should “look back at the way we were dealt with and not deal that way anymore. I don’t think we’ve learned that lesson because the dealings still are not all that great, even as a political entity. Part of it is that we’re conquered people. And we do have limited sovereignty. What I tell our people is, this Congress by a stroke of a pen can say, ‘You’re no longer a Dakota, you’re now a citizen of Shakopee. Have at it like everybody else.’