Afghan man charged in killing of 2 Muslims in A… 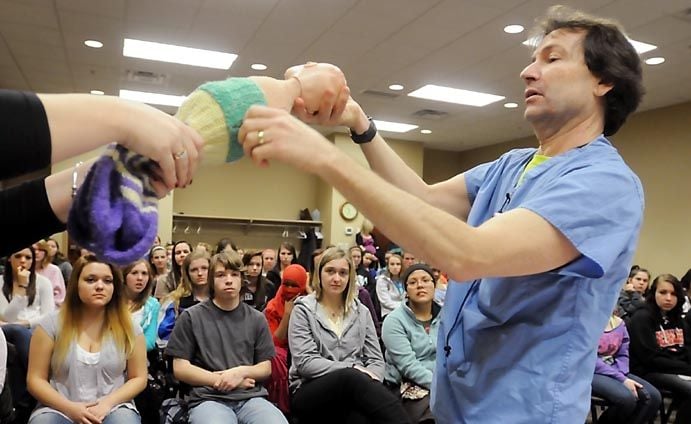 The early childhood class at Mankato West took a field trip to the Mankato Clinic where gynecologist-obstetrician Mark Taylor told them everything they wanted to know and didn't want to know about childbirth. 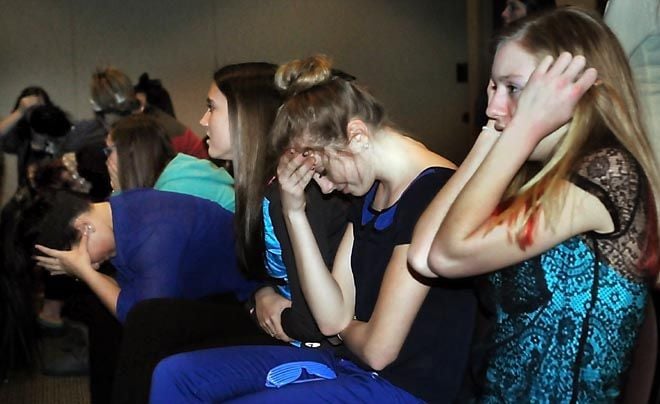 The showing of a video on ceasarean section births prompted some students to leave the room and others to turn their heads away in disgust. 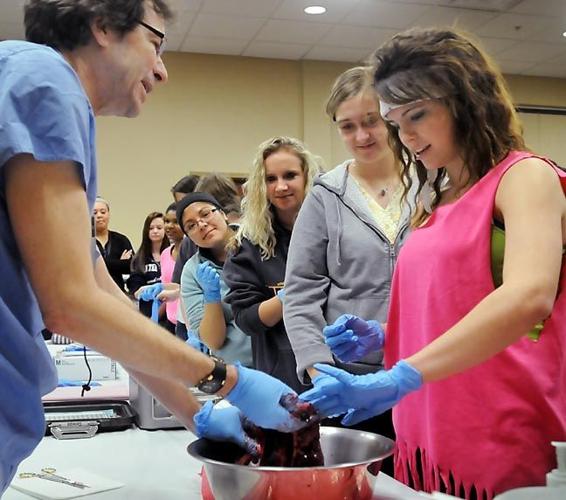 Part of Dr. Mark Taylor's presentation to Mankato West High School students was giving them the opportunity to touch a freshly harvested placenta.

The early childhood class at Mankato West took a field trip to the Mankato Clinic where gynecologist-obstetrician Mark Taylor told them everything they wanted to know and didn't want to know about childbirth.

The showing of a video on ceasarean section births prompted some students to leave the room and others to turn their heads away in disgust.

Part of Dr. Mark Taylor's presentation to Mankato West High School students was giving them the opportunity to touch a freshly harvested placenta.

Bear down!” the doctor says, and a room full of young women (and two or three guys) obeys.

The group laughs and giggles. Is this guy serious?

Whoa. Reality. Two hours of bearing down is roughly what a woman goes through when she’s trying to push a fetus through the birth canal.

Taylor’s point, well taken by the group, was this: Childbirth (news flash) isn’t easy. It’s incredibly painful — an experience Taylor likened to having the largest bowel movement of your life. How large? Try bowling ball large.

The group assembled is the child development class from Mankato West High School, a group made up of all grade levels. This is the fourth year Taylor, of the Mankato Clinic, has taken a morning to show the high schoolers the reality of childbirth.

It was part scared straight, part anatomy lesson, part stand-up comedy. Taylor — who it was revealed had delivered about 20 percent of the students in the room — knows how to keep an audience engaged.

He began by introducing a woman named Melanie Runge, who looked to be in her early to mid-20s. Runge was pregnant with her second child and had agreed to have Taylor perform an ultrasound on her in front of the class.

By the way, Runge’s first ultrasound didn’t go so well. Taylor couldn’t see the baby, and her body was producing less than ideal levels of ACG, the chemical doctors look for to confirm pregnancy.

“We had a bleak conversation,” he said. “It looked like it was a miscarriage. ... I had already been preparing my what-do you-want-to-do-about-this speech.”

Added Runge, “That was a rough weekend.”

But a week later, the baby was 66 milimeters.

“Now look at it!” he said, gesturing to Runge’s beautifully protruding belly.

After giving the kids the back story on Runge, Taylor prepared to perform the ultrasound. As the ultrasound gel splurted out of the tube, girls around the room jockeyed for position.

Within seconds, an image appeared on the monitor that was unmistakable.

Girls giggled, gasped, held their hands to their hearts, while on the screen, a series of rapid flutters showed everyone exactly how healthy the baby’s heart was.

“You can see the valve opening up, sending blood out,” Taylor said. “One, two, three four chambers. If you see four chambers, that rules out 90 percent of heart defects. ... That looks wonderful.”

Time to quiz the kids.

“Can you guys see this? Does anyone know what this is?”

“That’s the butt. There’s a cheek. There’s another cheek,” he said. “And it is a cute little butt.”

“Can you see this? Anybody got a guess as to what this is? Anybody? It’s toward the butt? It’s filled with fluid? Can anybody guess?”

“It’s the bladder,” he says, and they giggle some more, as if they were thinking of something else.

“Can you tell the kid to stop moving around so much?” he joked. “This is the most entertaining baby we’ve had. Others have been kind of sluggish.”

One more quiz: “Anyone know what this little round thing is?”

“That’s her little boy,” he said. “That’s a scrotum. So (Runge’s first child) Kale’s got a brother. I was hoping we might able to catch that. You gotta have a cooperative baby.”

Then it was movie time. If Taylor’s frank talk about pain and blood and bags of water exploding in his face started the task of conveying the messy reality of childbirth, the movies he brought in on vaginal and cesarean section births finished it up.

The vaginal birth scenes were enough to prompt a few students to get up and leave the room and a few others to turn their heads. But when the woman’s abdomen was opened to reveal a lot of stuff few people in the room had ever seen before, gasps filled the room, heads darted away in disgust and a few more people left the room.

“It was the most effective birth control I’ve ever seen in my life,” said Tim King, one of the few boys to take Laurie Hagberg’s early childhood class this quarter.

Students Katelyn Furst and Maria Soroka were very impressed with it all.

“That was cool,” Furst said.

Added Soroka, “It was amazing.”

“It was kind of gross,” she said, before uttering the phrase organizers hoped to hear: “I kind of don’t want to have a baby.”

Teacher Laurie Hagberg said part of the point of visiting Taylor is to give kids a dose of reality, to remind them that childbirth has little to do with glamour and everything to do with major life change.

“It’s real life,” Hagberg said. “From this, they get a clear understanding and awareness that they’re not ready for this.”

To send them off with a vivid reminder of their day with him, Taylor invited them to don rubber gloves and get line to touch a freshly harvested placenta. Just about all the students answered the challenge, many of them proclaiming it “gross,” but curiously poking it and holding it anyway.