After two months of construction disruption, the final touches are put on South Front Street, with an opening set for Friday. Photo by John Cross 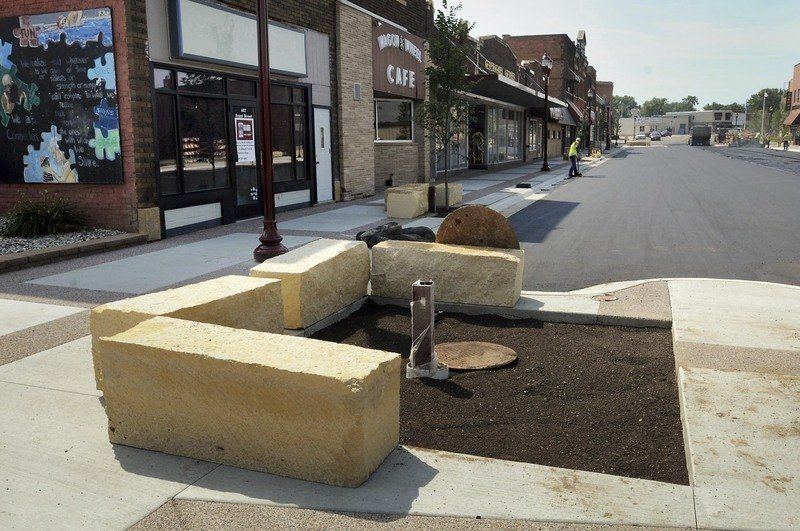 Blocks of local Kasota stone were used along the new pedestrian walkway on South Front Street. The new look is getting rave reviews from area business owners. Photo by John Cross

After two months of construction disruption, the final touches are put on South Front Street, with an opening set for Friday. Photo by John Cross

Blocks of local Kasota stone were used along the new pedestrian walkway on South Front Street. The new look is getting rave reviews from area business owners. Photo by John Cross

MANKATO — Mark Hustad admits he's a bit of a contrarian, so he surprised himself with his gushing review of the new pedestrian walkway about to open in front of his used bookstore on Front Street.

"I think it's better than ever imagined. Now that they put it in it's like Christmas, it's a big surprise. I'm usually pretty critical of things, so it even surprised me."

For two months, various stretches of South Front, Cherry and Warren streets have been closed or restricted for a variety of construction projects, including three office/residential towers and a parking ramp, as well as the pedestrian walkway in which sidewalks were widened and some angled parking put in.

The city had hoped to have the street work done two weeks ago. The project will technically be just one week late as contractors were given an additional week for their deadline due to rain days.

"Shoot off the fireworks," Jim Downs of Pagliai's Pizza said about the reopening of the streets, slated for Friday.

"It has its challenges, as construction does. It's been a little long, it never goes as fast as you want it to," he said.

"But it's absolutely beautiful. People seem to like the pedestrian area, they think it's pretty cool. It's a totally different look.

"I think it will do just what the city wants, to make it a pedestrian walkway and bring more people downtown."

Jay Reasner, managing partner at Pub 500, said the construction has had an effect on business, "But it's been OK."

"I've heard nothing but positive about the pedestrian walkway. It's an upgrade to the whole downtown. Every great city has a vibrant downtown. It's the heart of a city," Reasner said.

Hustad has one of the longest memories of doing business in the area. He opened Once Read Books at 629 South Front in 1975.

"A few years later it started emptying out downtown. I remember how bad it got in the '80s when there were no customers all day and the boarded up windows," Hustad said.

"This brings the 600 block back into downtown and that's just thrilling for me. It's good to feel part of downtown again."

He said he and neighboring businesses are excited about additional parking that will be available as some blocks have been changed from parallel to angled parking.

And he said the pedestrian walkway design, which includes blocks of local Kasota stone, blends well in the area.

"I was concerned it would be too modern looking, stainless and glass or something, but it's really a comfortable look. It fits in with the old brick buildings. And when the trees get bigger it's really going to be better."

City Engineer Jeff Johnson said final paving was being done Wednesday and Thursday. The final touches will require a temporary closing of the Warren Street and Cherry Street intersections at staggered times.

As paving is completed another contractor will be putting in custom crosswalks in the two intersections.

"Then there's some final striping and there may be some landscaping and lighting work that needs to be done after the roads open."

The wider walkways and angled parking in some blocks means the street on Front Street is now narrower. Bump-outs were put in at all crosswalks crossing Front Street with the two-lane road just 22 feet wide in-between the bump-outs. A normal street with parallel parking is 38 feet wide.

Johnson said the bump-outs and narrower street decrease the distance for pedestrians to cross. "The intersections' main purpose is for pedestrian crossing."

And, he said, the narrower street will help slow traffic in the area that is crowded with people visiting the bar and restaurant district at night.

Johnson said he knows area businesses have seen hardships from the construction.

"It's been a challenging project for the businesses. It's time we get it open to them so they have access to their storefronts."