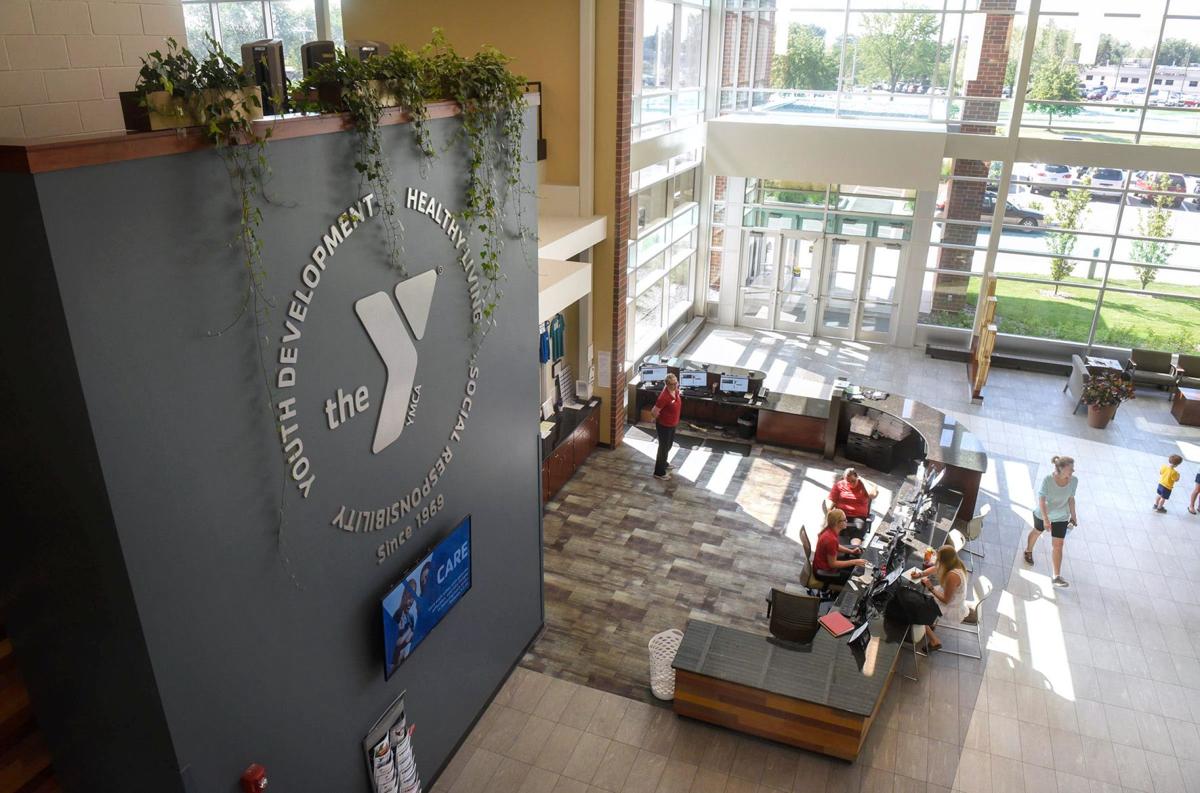 The main entrance of the St. Cloud Area Family YMCA. The facility is municipally owned and leased for $1 a year to the YMCA, which manages it and covers operational costs. 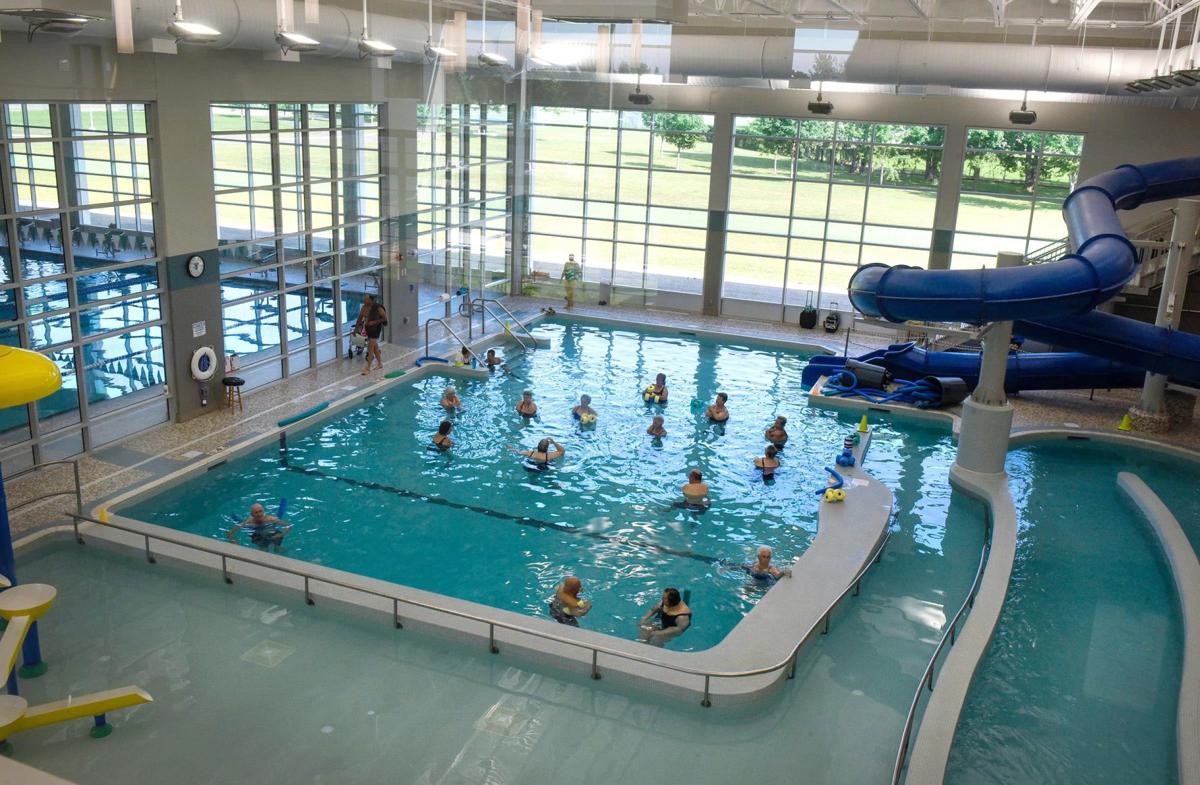 A class is held in one of the pools at the St. Cloud Area Family YMCA. St. Cloud partnered with the Y to build the facility, which is owned by the city and operated by the Y.

The main entrance of the St. Cloud Area Family YMCA. The facility is municipally owned and leased for $1 a year to the YMCA, which manages it and covers operational costs.

A class is held in one of the pools at the St. Cloud Area Family YMCA. St. Cloud partnered with the Y to build the facility, which is owned by the city and operated by the Y.

The Mankato YMCA continues to move steadily but cautiously toward building a second facility on the city’s east side, complete with a 12-lane competition-quality swimming pool, gymnasiums, exercise rooms, a community garden and a cafe.

Depending on fundraising success and potential partnerships with the city of Mankato, the new east-side Y could also include a day care center and a public indoor/outdoor splash pad and family pool. Already, a donor has offered eight acres of land, and a letter of intent has been signed, said YMCA Executive Director John Kind.

Consultants have determined the new facility — expected to cost between $21 million and $25 million — would increase the Y’s current membership by 50%, and that revenue generated by the facility would cover ongoing operational costs, Kind said. The next step is gauging the fundraising potential of the proposal, including the willingness of major donors to participate.

The Y’s Board of Directors has not given the project the go-ahead, but board members have been supportive of continuing the planning process.

“They know this is a big step,” Kind said. “And while the numbers look good, they just want to be cautious and make sure.”

In a presentation to the City Council last week and in an interview with The Free Press, Kind laid out the vision for the new Y, the timetable for construction and the possible additional amenities that might be possible.

The precise location of the donated land won’t be revealed until a formal announcement is made. The eight-acre size of the lot — about three acres larger than the existing Y on Riverfront Drive — provides options for outdoor facilities.

That includes space for two or three athletic fields to be used by the very young soccer and flag football players and other grade-school-age athletes that play on Y-organized teams. A community garden is planned, too, where members could learn about gardening.

The facility also would include a kitchen classroom for teaching members about healthy cooking and eating, Kind said. The garden and kitchen arose out of the Y’s previous outreach effort to learn what the community wants from a new facility.

“We were told, we would like a Y that’s more than just a place for people to work out,” he said.

The facility would still have traditional features, including two gymnasiums, a two-level Kids Zone gym, a teen center, two exercise studios, a wellness center and four locker rooms — including two built to house swim teams competing at the pool.

That pool would be a central feature of the new Y, becoming the first indoor pool in the city fully capable of hosting swim meets. Minnesota State University and East High School have six-lane pools, and it takes a minimum of eight lanes to properly conduct a swim meet, Kind said.

“It would be kind of like having an indoor Tourtellotte,” he said, referring to Mankato’s eight-lane 50-meter outdoor pool.

The Y pool wouldn’t be quite as long but would have 12 lanes.

While the pool would be built to handle competitive swimming — and both Mankato Area Public Schools and MSU have expressed interest in using the pool — it also could be used for swimming lessons, community lap swimming and water aerobics classes. What the pool won’t be designed for is casual family outings involving young children, something the pool at the west-side YMCA provides already.

Part of the plan is to avoid complete duplication between the two YMCAs, partly to ensure the existing Y continues to be attractive and well-used.

“We want to have some things at the west-side Y that the other Y doesn’t have,” Kind said.

That said, the City Council could decide it wants to finance water features at the new Y aimed at families, possibly including a shallow family-friendly pool and an indoor all-weather splash pad that leads to an outdoor splash pad in warmer months.

“For a couple of million dollars, we could do something really nice for Mankato families,” Kind said.

Any city-financed water features would be open to the general community — not just dues-paying members of the YMCA.

Donors By Design, which specializes in financial consulting for YMCAs, just finished a study of the projected operational expenses of the new facility and found that a two-YMCA model would have balanced books.

“The numbers look very good,” Kind said, adding he couldn’t share details until he had presented the results to the Board of Directors.

Donors By Design’s next task is to study the prospects of reaping more than $20 million in donations to cover construction costs.

“This study would tell us whether we can raise the kind of money we would need for the project,” Kind said, adding that the process will start by reaching out to 30 key community members about their willingness to participate.

If fundraising comes up short, the city may be asked to contribute to the base project using revenue from the half-percent local sales tax. Numerous other projects — including multiple sports/recreation facilities — are competing for that limited amount of revenue, and the council is expected to begin prioritizing projects this spring.

At a City Council workshop, both Kind and City Manager Pat Hentges mentioned a partnership in St. Cloud that resulted in a new YMCA. In that case, the city contributed to the facility’s construction and owns it but leases it for $1 a year to the YMCA, which operates it.

“It could evolve into something like is happening in St. Cloud,” Kind said.

Hentges said the city is prohibited from using the sales tax proceeds to repay debt for a building that’s not government-owned.

“Participation in the project would require ownership if we were going to issue upfront bonds/debt,” Hentges said.

Kind believes the city could make annual contributions to the Y in return for use of some facilities by the general public. Alternatively, the facility could be separated into a YMCA-owned and YMCA-financed building with a connected city-financed and city-owned pool.

The projected timetable for opening a new YMCA is October 2022 to October 2023. That schedule would mean any upfront contribution from the city’s sales tax would need to come from a $10 million pool of money the council is expected to allocate in the next two years.

Another $10 million in funding capacity is projected to become available by 2028.

The council already has roughly $25 million in requests — softball and baseball field upgrades, ice rinks and improvements at Tourtellotte Park — vying for that initial $10 million.

Kind doesn’t expect that the Y would be able to wait until 2028 for a city contribution.

“If we’re going to do this, I think we need to do it well before then,” he said.

Asked if the YMCA-financed facility could be built first with a city-financed swimming pool coming later in the decade, Kind didn’t rule out the possibility — if it was the only way for Mankato to get the indoor swimming pool he believes is desperately needed.

“Doing it piecemeal like that, I don’t think is out of the question,” he said. “It just isn’t as desirable.”